Accessibility links
Protests Against Algerian President's Bid For Fifth Term End In Chaos Throngs of people flooded the streets of the North African country's cities on Friday to demand the ailing president withdraw from the April 18 election. Clashes with police developed in Algiers. 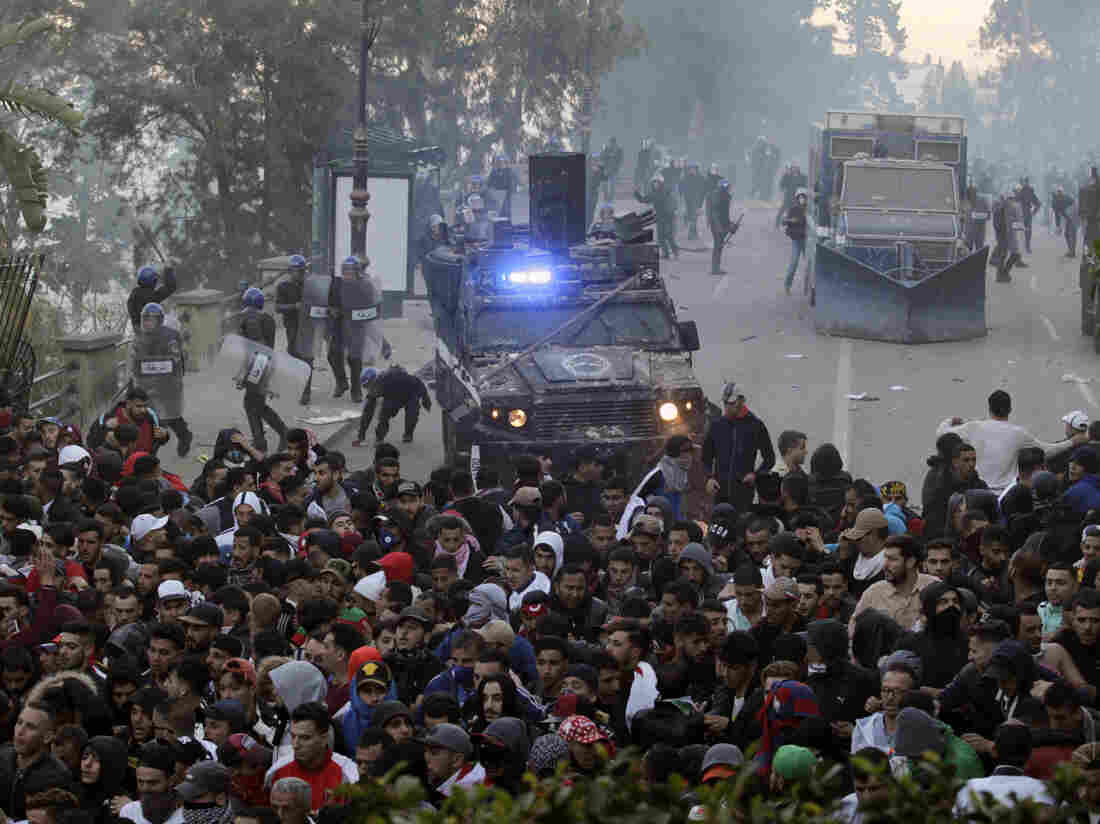 Protesters clashed with police in the streets of Algiers, Algeria, during a demonstration denouncing President Abdelaziz Bouteflika's bid for a fifth term on Friday. Toufik Doudou/AP hide caption 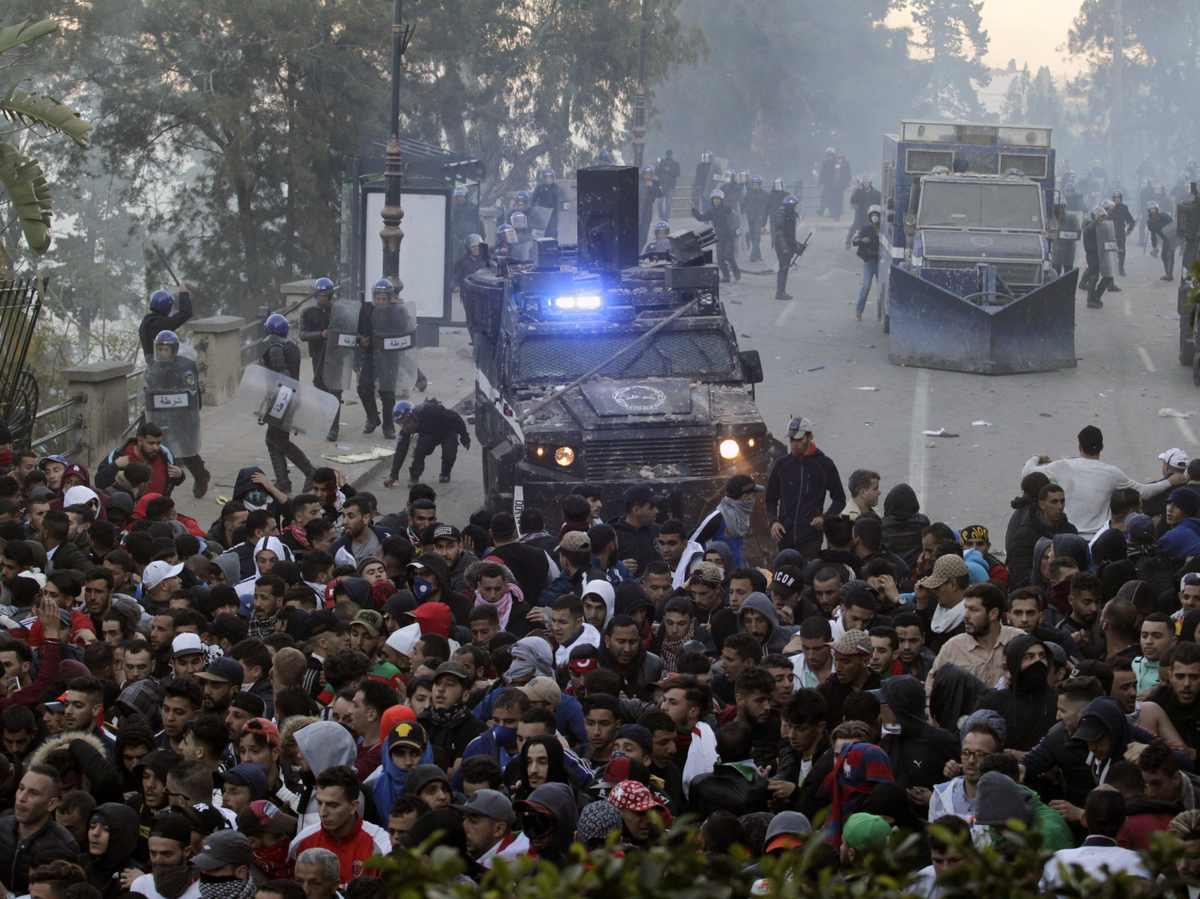 Protesters clashed with police in the streets of Algiers, Algeria, during a demonstration denouncing President Abdelaziz Bouteflika's bid for a fifth term on Friday.

Waves of demonstrations swept across Algeria Friday, continuing days of protest against President Abdelaziz Bouteflika, who earlier this month confirmed he is seeking a fifth term in office. But unlike previous marches, which have remained largely peaceful, processions in the nation's capital at the start of the weekend ended in chaos and violence.

Throngs of people flooded onto the streets of several of the North African country's largest cities to call on the ailing 81-year-old to pull out of the presidential election on April 18.

Protestors, shrouded under Algerian flags and carrying anti-government banners, were mobilized by word of mouth and social media shortly after Friday prayers.

"No fifth term!" and "FLN, Go away!" were some of the slogans that echoed down teeming streets from Algiers to Oran, Constantine, Tizi Ouzou and other cities.

In Algiers, the capital, where police had erected barricades to contain the procession, law enforcement fired tear gas into crowds as people tried to push past the boundaries on the way to the presidential palace.

The Associated Press reported "the crowd overwhelmed a police barricade, pushing on toward Martyrs' Square in the historic Casbah neighborhood."

"That created chaos," Maher Mezahi, a freelance journalist based in Algiers told NPR, stressing that up until then the demonstration had been peaceful and courteous.

"Some people were even carrying flowers to give the police officers because we know they're just doing their jobs," Mezahi said.

Algerian youth marched towards the Presidential Palace singing, "Bring the SWAT team and special forces, there won't be a fifth term, Bouteflika" pic.twitter.com/d4mjA5t6Vq

Mezahi described a widespread feeling of optimism among Friday's activists — much like that which spread during the Arab Spring movement in 2010 — that the public expression of discontent with Bouteflika and the current regime "will produce some kind of change."

But as the day went on, clashes erupted between security forces and protesters.

Reporter Djamila Ould Khettab called the situation "tense" in a tweet that included a photo of a billowing fire outside of the El-Djazair Hotel, formerly known as the St. George Hotel.

Anti-government protests are rare in Algeria, where Bouteflika's National Liberation Front party has imposed draconian penalties for anyone who disrupts "the morale of the nation."

"For a long time Algerians have been living in a state of fear but that has been broken now," Mezahi said. "People from all walks of life — old people, students, children — are engaging with the political process again and they're doing it in a respectful way," he added.

The public outcry against the president may have been sparked by the announcement that the reclusive leader, who has rarely been seen since suffering two strokes in recent years, would seek to hold onto power after two decades. But after more than a week of protests it has grown to include the secretive cabinet around Bouteflika, especially his brother Saïd Bouteflika, whom many accuse of staging a de facto coup, wresting control of the government.

Bouteflika has been in power since 1999 and brought an end to a decade-long brutal civil war between Islamic insurgents and security forces.

Prime Minister Ahmed Ouyahia on Thursday urged the public to remain vigilant against "foreign parties" who may be behind calls for demonstrations.

Ouyahia insisted the presidential elections will be transparent and assured the public that "nothing can prevent the Algerian people from freely electing a president of the Republic."

Friday's marches are the latest in a string of demonstrations in the last week. On Tuesday university students swarmed city streets across the country. Thursday, journalists gathered in Algiers to condemn their media outlets' for barring coverage of the protests. Several were detained as they attempted to march toward Freedom of the Press Square, the AP reported.