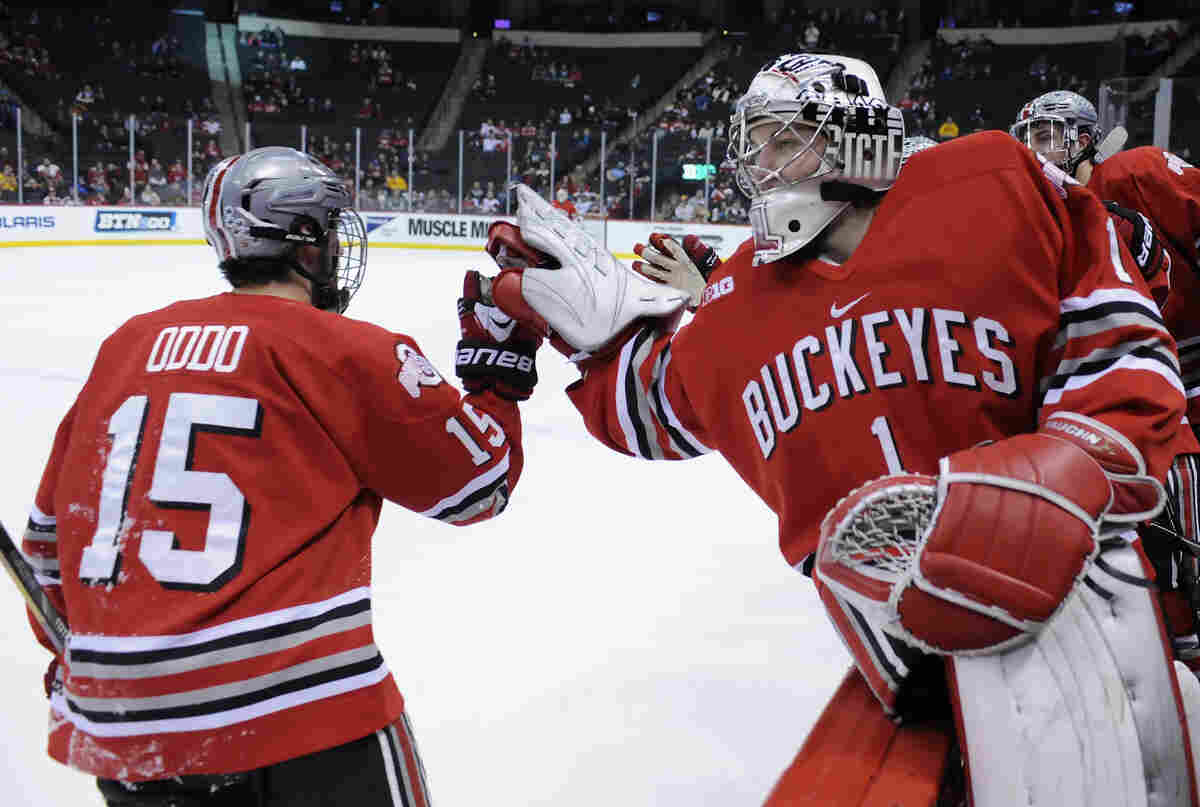 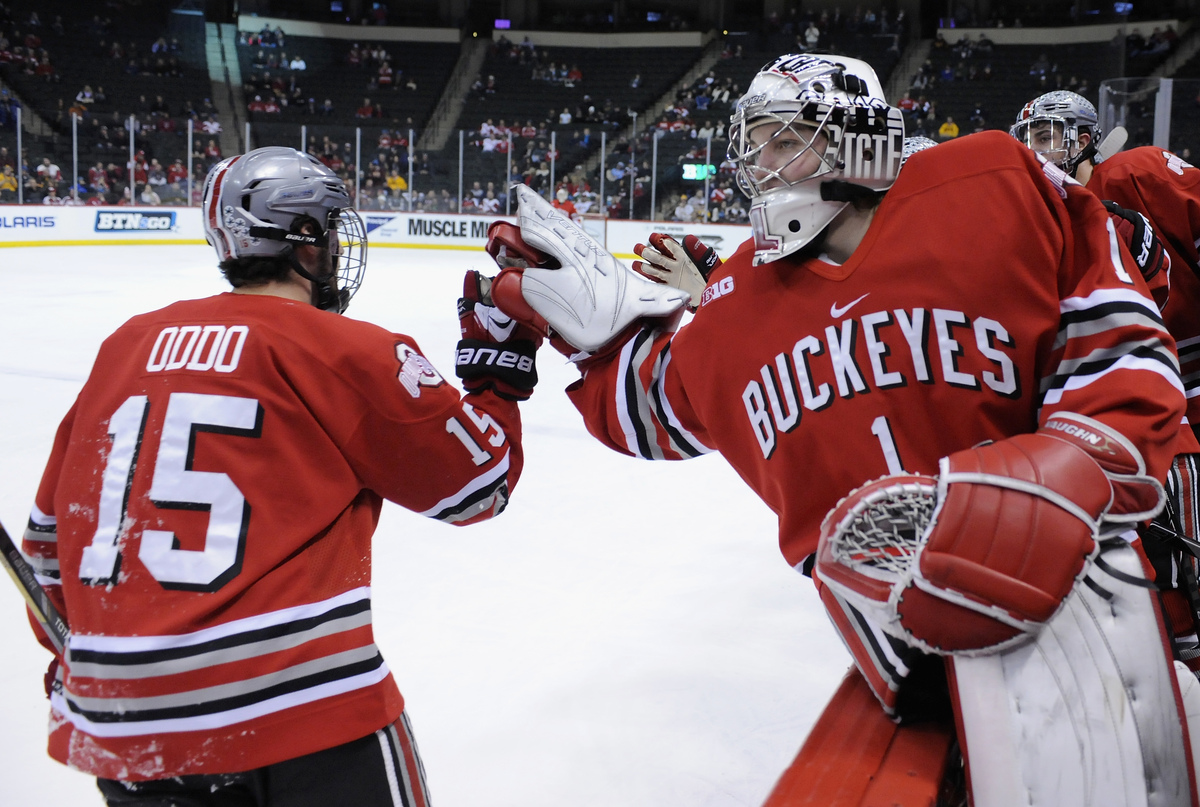 Davis sports a classic hockey helmet haircut: his brown hair is long, reaching to his ears and sticking out to the side. Viewers first see Davis in his element: on the ice, tending a goalie net in his Ohio State Buckeye's college hockey uniform.

Playing hockey had been his passion since he was 5, and being a starter goalie for a Big Ten hockey conference team as a college freshman was nothing short of a dream come true for Davis.

Davis' drive propelled him to hockey stardom. That same drive pushed him to develop an eating disorder.

After his coaches replaced him as starter goalie with a newly-recruited player, Davis decided to get in peak physical condition: all muscle, no fat. He wanted to prove himself to coaches.

He ate less and less; he worked out more and more. He lost almost 30 lbs and was eating 500 calories a day.

His story — and eating disorders among men — is more common than one might think. Roughly one in three people struggling with eating disorders is male, according to the National Eating Disorders Association.

It's a problem that has affected athletes at every level, such as Olympic gold-medalist German rower, Bahne Rabe or host of NPR's Wait Wait Don't Tell Me, Peter Sagal, in his younger years.

Many men may not realize or admit they have an eating disorder, O'Brien told NPR's Michel Martin, since it's usually thought of as a female problem.

"When you look at the definition for many about what an eating disorder is ... the first thing that they would see would be, well, step one — usually you'll lose your period," she said. "So they would say well, clearly this is not for me. This is not an issue I have."

The very culture surrounding athletics means that these eating disorders will often go untreated, and often, the athlete's weight loss will be celebrated. Among his teammates and coaches, Davis told O'Brien that his weight loss was "lauded."

Rather than being seen as dangerous, the rigid discipline exhibited by athletes regarding their eating and exercise habits was seen as a sign of strength among many of the male athletes O'Brien interviewed.

"They were being cheered because of the results that people would see," she said. "I think society too, saying, 'wow that person is dedicated and more dedicated than than everybody else. They want it more.' "

This attitude is often internalized by the athlete, and provides a potential narrative to justify an unhealthy focus on diet and exercise. For example, O'Brien said that one young male athlete she interviewed traveled with a chicken breast in his pocket to dinners because he was so anxious about eating the restaurant's food.

"I said to him like, 'At that point, when you're pulling a chicken breast out of your pocket, did you think: I clearly have an issue?' " she recalled. "He said 'I thought I was just more dedicated than everybody else.' "

Scrunity of athletes' bodies can be especially intense from their coaches, particularly in sports that emphasize weight or appearance. In sports such as running, or cycling, athletes often try to burn off extra pounds to make themselves lighter in the the hopes of going faster.

Guy East is a professional United States road and track cyclist who has competed internationally since 2005. He's built with powerful, muscular legs.

Back when East was dedicating his life to cycling, he told O'Brien that his coach would offer him a salad after a six-hour ride, then pinch his stomach and tell him to lose weight.

This toxic culture pushed East to throw up a couple times a week, sometimes multiple times a day, in order to lose weight.

East never went into formal treatment for his eating disorder. He was only able to re-establish a healthy relationship with food after he removed himself from the world of pro-cycling. Nowadays, one can find East cooking with his children, or teaching up-and-coming cyclists how to be healthy.

Chillin in the cabin after the first chase of the 3rd night.

Not every story ended on such a positive note. O'Brien's piece is tough to watch, particularly toward the end, when viewers learn the story of William Brooksbank.

As a child, Brooksbank was a swimming phenomenon. At the age of 10, he placed third in a state swimming competition. Shortly after, he developed an eating disorder. He was 11 years old at the time.

In early photos of Brooksbank, he has chubby cheeks. As the years wore on, each successive photo of Brooksbank shows his face getting more and more gaunt — his skin stretching tighter and tighter across increasingly prominent, bones until there seems to be no softness left — just harsh skeletal angles.

"He was a living skeleton," O'Brien said.

His father, Kenn Brooksbank, told O'Brien that his family spent more than $600,000 paying for his son's treatment facilities, but Will died on Friday, June 13, 2014 from cardiac arrest.

At the time of his death, he weighed 55 lbs.

"I watched him commit suicide in slow motion for 11 years," his father told O'Brien.

In the segment, viewers see disturbing photos of Will shortly before he died.

Schools are now rethinking how they deal with student athletes, O'Brien said. But what surprised her the most in her reporting, she added, was how little many of the elite athletes she interviewed seemed to know about nutrition.

"They were thinking in terms of 'I'm fat, I'm thin,' but not in terms of 'what do I need nutritionally to make my body most effective?' " O'Brien said.

A lot of this has to do with so-called "bro-science," which is advice posted on social media by men on how to lose weight or build muscle, but isn't actually scientific or accurate.

In general, social media played a big role in the eating disorders of the athletes that O'Brien interviewed.

"All of the young men we spoke to talked about the power of Instagram and literally wanting to show people and show off their bodies or feeling ashamed of their bodies because [of] how they would look on social media," she said.

Davis was one of the athletes who used social media in relation to his eating disorder. He told O'Brien that he would hear bro-science tips and try to follow them in order to get in "perfect shape."

But Davis is no longer looking to pseudo-science for help. He is now seeking professional treatment for his eating disorder.

He is learning to eat every two to four hours and looks healthy.

But, when Davis stares in the mirror, he told O'Brien that he still doesn't like what he sees.

NPR's Tinbete Ermyas and Nell Clark edited and produced this story for broadcast.