Accessibility links
Space Station Celebrates 'A New Era' In Exploration With Arrival Of SpaceX Capsule Astronauts in the station opened Crew Dragon's hatch and entered the spacecraft on Sunday, in a significant moment for both Elon Musk's company and the future of commercial space exploration. 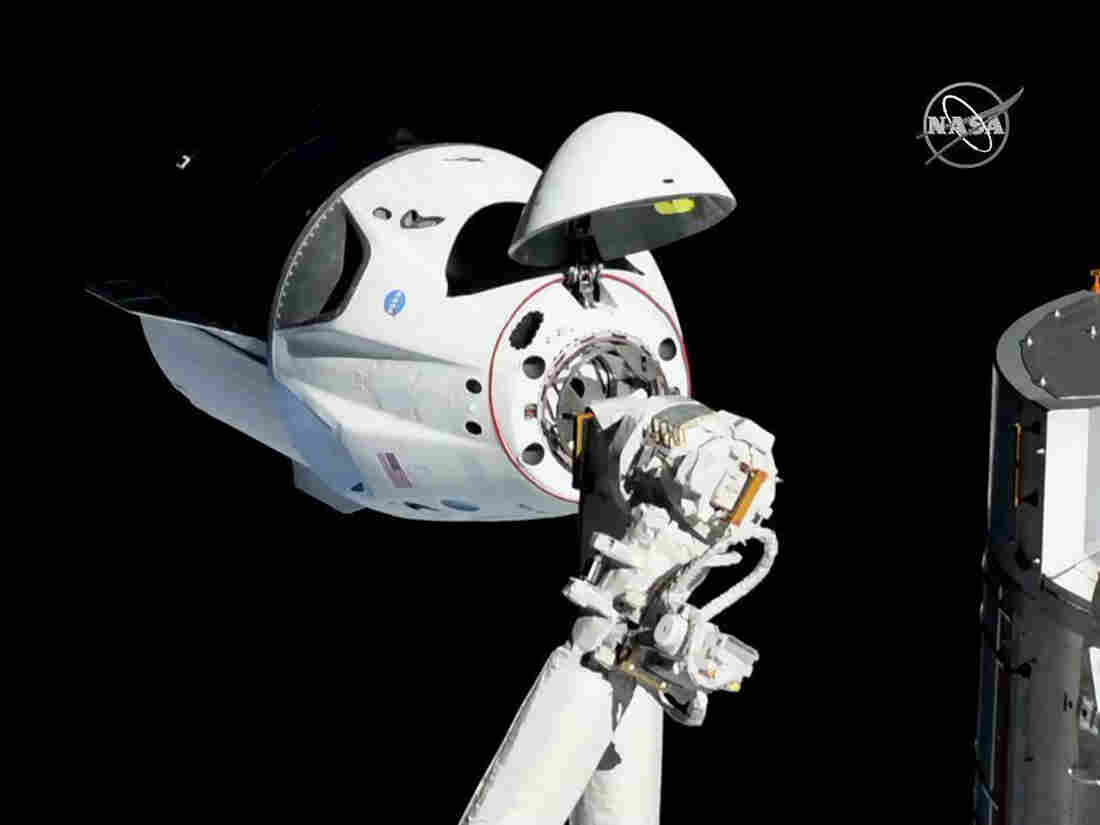 In this photo provided by NASA, the SpaceX Crew Dragon is pictured just beside the International Space Station. SpaceX's new crew capsule arrived at the station on Sunday in a remarkable moment for commercial space exploration. NASA via AP hide caption 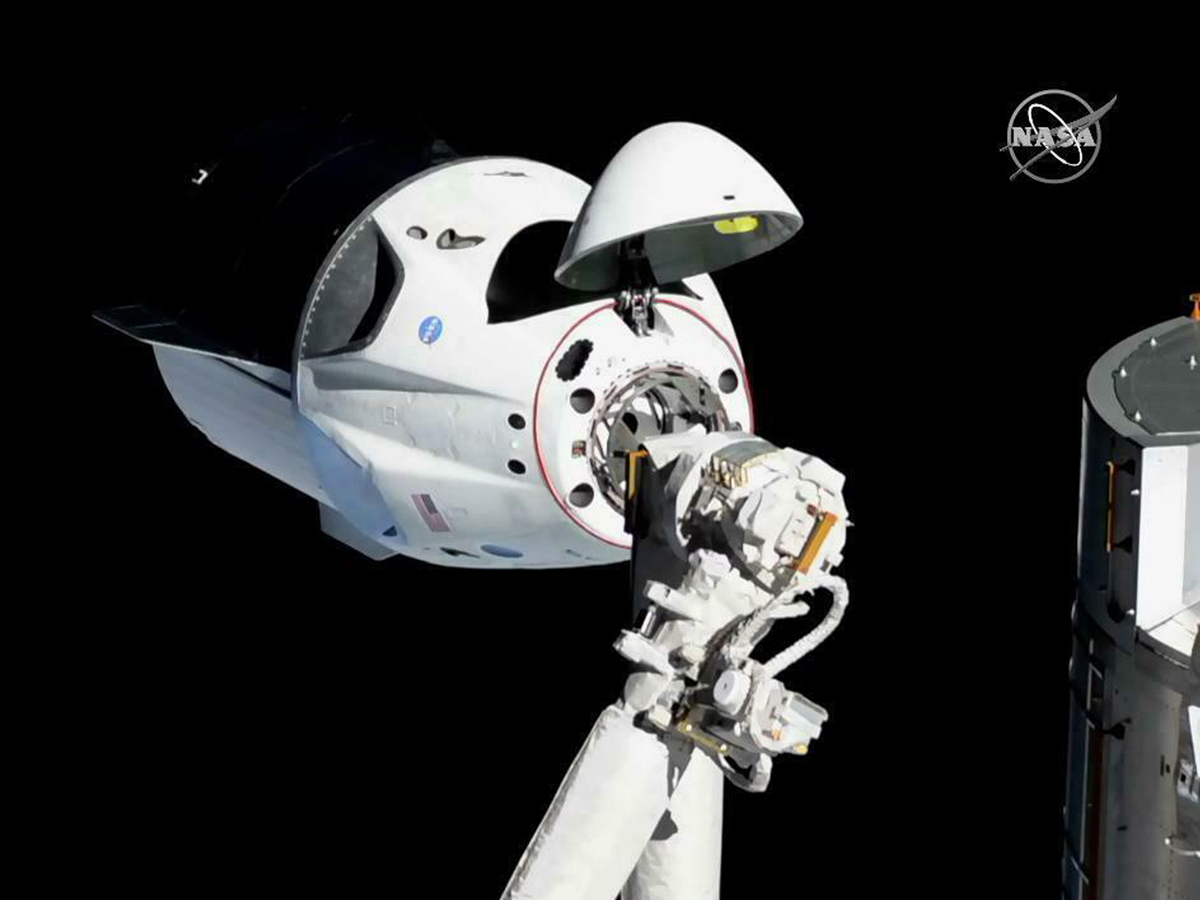 In this photo provided by NASA, the SpaceX Crew Dragon is pictured just beside the International Space Station. SpaceX's new crew capsule arrived at the station on Sunday in a remarkable moment for commercial space exploration.

Humans have entered SpaceX's Crew Dragon while in orbit for the first time, just hours after the commercial spacecraft docked at the International Space Station on Sunday morning.

The new space vehicle, carrying only cargo and a human dummy, launched Saturday from NASA's Kennedy Space Center in Florida. On Sunday, the ISS crew watched as Crew Dragon became the first American commercial space vehicle designed to carry humans to dock at the station, according to NASA.

"Congratulations to all nations, private space firms and individuals who wake up every day driven by the magic of exploration," American astronaut Anne McClain, the third crew member on the station, said at a welcoming ceremony broadcast over NASA TV. "This day belongs to all of us."

The entire procedure was light on showmanship compared to SpaceX's last major flight test, when the company launched a red Tesla into space on its Falcon Heavy rocket. But Sunday's event was a major step forward for the company, which has so far only ferried cargo into and out of orbit.

This morning, I monitored the first time ever approach and automated docking of Crew #Dragon to the ISS. The dawn of a new era in human spaceflight! #daretoexplore pic.twitter.com/Vs4niNvv2T

"This is a good day," said Saint-Jacques, an astronaut with the Canadian Space Agency. "The first day of a new era for the next generation of space explorers."

During Sunday's mission, the ISS crew methodically checked off tasks, starting with atmospheric tests. After allowing the air in the craft to mix with the air in the station, the astronauts returned without oxygen masks to properly welcome Crew Dragon — by installing window covers and checking valves.

The crew also took selfies and videos, including a few shots with Crew Dragon's second passenger, a small, stuffed Earth with limbs and a perplexed facial expression that bounced about the capsule in microgravity.

McClaine: “On behalf of Ripley, little Earth and myself, welcome to the Crew Dragon.” pic.twitter.com/Kq2Y4ijrOB

The successful demonstration brings the U.S. one step closer to once again sending people into orbit without relying on Russian space vehicles, which have ferried American astronauts to the International Space Station since NASA retired its shuttles in 2011.

Now, sensors on the dummy passenger will be able to offer a more complete picture of how a real human body will fare the trip in the new vehicle. That'll become crucial when NASA eventually sends astronauts up in Crew Dragon, which could happen as early as this summer, if all tests go as planned.

Those handpicked space travelers, astronauts Bob Behnken and Doug Hurley, watched the Crew Dragon launch from Florida, then traveled to Hawthorne to see operations unfold along with the SpaceX team, according to NASA. The celebration was a milestone for Musk, who launched the company in 2002 with the goal of taking humans into space and one day colonizing Mars.

Today’s successful launch marks a new chapter in American excellence, getting us closer to once again flying American Astronauts on American rockets from American soil. Congratulations to the @SpaceX and @NASA teams for this major milestone in our nation’s history. #LaunchAmerica pic.twitter.com/Gk8c9EdXNO

More than 200 miles above the Earth, McClain and her crew mates offered a slightly different message. McClain called back to the early milestones in space exploration, including the first human to reach outer space – Soviet cosmonaut Yuri Gagarin – and the 1969 moon landing by American spaceflight Apollo 11.

"These events remind us ... that we can be united by a cause that is not based on fear, threat or common enemy, but rather on a bold endeavor," she said. "An insatiable curiosity to go beyond what is known and to do what has never been done."

The Crew Dragon is scheduled to remain docked for five days before returning to Earth on March 8.

A previous version of this story misidentified one of the crew members as Oleg Artemyev. The cosmonaut on board is Oleg Kononenko.