Accessibility links
'Say Nothing' Is A Panoramic History Of Northern Ireland's Troubles Patrick Radden Keefe's new book begins with the 1972 disappearance of a 38-year-old widowed mother in Belfast, then spins into an epic account of Northern Ireland's bloody sectarian conflict. 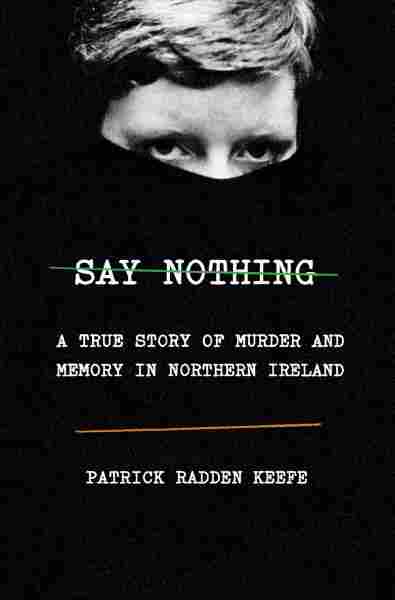 A True Story of Murder and Memory in Northern Ireland

It was a cold December night in 1972 in Belfast, Northern Ireland. A 38-year old widowed mother of 10 named Jean McConville was with her children in their apartment in the Divis Flats, a labyrinthine public housing project that one critic described a "slum in the sky."

There was a knock at the door and a gang of masked intruders burst in. They ordered Jean to put on her coat and began pulling her out of the apartment. The children went nuts, screaming and grabbing.

Oddly, not one of McConville's neighbors in the overcrowded projects stepped into the hallway to see what all the noise was about. As she was hustled into a waiting van, McConville's last words to one of her older sons was, "Watch the children until I come back."

Patrick Radden Keefe describes that primal nightmare in the first chapter of his extraordinary book, Say Nothing. If Keefe had only focused on McConville's kidnapping and murder, Say Nothing would have been a mesmerizing true crime story.

But, instead, McConville's disappearance (at the hands of the IRA, who suspected her of being an informer) is "merely" the mystery at the center of a web of disturbing stories. Smoothly wound together, they compose an epic account of the Troubles in Northern Ireland, the bloody sectarian conflict between Catholics and Protestants that extended from the late 1960s to the Good Friday peace accord of 1998.

All the while I was reading Say Nothing, I kept thinking of Common Ground, J. Anthony Lukas' Pulitzer Prize-winning book about the Boston school desegregation battles of the 1970s. That's about the highest compliment I can pay to any work of reportorial non-fiction.

Like Lukas, Keefe is a storyteller who captures the complexities of a historical moment by digging deep into the lives of people on all sides of the conflict. Keefe spotlights everyone from Gerry Adams, the former Sinn Fein politician (whose denials of involvement in IRA violence Keefe finds preposterous) to Frank Kitson, the British chief army intelligence officer, whom the IRA referred to as the "Butcher of Belfast."

Keefe escorts us readers through the fetid corridors of Long Kesh prison, where IRA hunger strikers, like Bobby Sands, died. He also ushers us into the elite precincts of the "Treasure Room" of Boston College Library, where oral history recordings that hold clues to McConville's fate turn out to be archived.

All the while, Keefe is attuned to the fascination with repression and martyrdom that runs through Irish culture. His book's title refers to the wary atmosphere of silence bred by the Troubles, as well as to lines from a poem by Seamus Heaney called "Whatever You Say, Say Nothing," in which he describes: "the famous/Northern reticence, the tight gag of place ..."

For Northern Ireland, Wounds From 'The Troubles' Are Still Raw

If McConville's vanished figure haunts Keefe's sweeping story, two other women — Dolours and Marian Price — are its vital focus. The Price sisters were born into a militant IRA family; according to Keefe, they grew up listening to their father's lectures on how to mix improvised explosives.

As young women in the 1970s, both joined the Provisional IRA, or "Provos" as it was called, carrying out bank robberies, planting explosives, driving informers to their deaths and worse. Keefe smartly susses out the intersection of feminism and violence that, for a time, formed the fearsome femme fatale reputation of the Price sisters saying:

"[Irish] society that had always been a bit fusty and repressed was suddenly splitting apart in the most cataclysmic fashion. The perceived threats of sexual liberation and paramilitary chaos converged in the mythical specter of a pair of leggy, rifle-toting libertines."

In 'Say Nothing,' The Story Of A Murder In Northern Ireland

In 'Say Nothing,' The Story Of A Murder In Northern Ireland

As powerful as Keefe's account of the Troubles is, it's the aftermath that makes for a truly agonizing story, when, in particular, so many of the IRA members he profiles must reckon, in late middle age, with the consequences of decisions they made as teenagers.

For the McConville children, some of whom grew up in abusive orphanages after their mother's disappearance, 2003 brought some measure of closure when her remains were discovered on an eroded stretch of beach in the Irish Republic.

At the end of his panoramic book, which gathers together history, politics and biography, Keefe tightens the focus back to the mystery of McConville's abduction and murder. And, as in the most ingenious crime stories, Keefe unveils a revelation — lying, so to speak, in plain sight — that only further complicates the moral dimensions of his tale.

Read an excerpt of Say Nothing