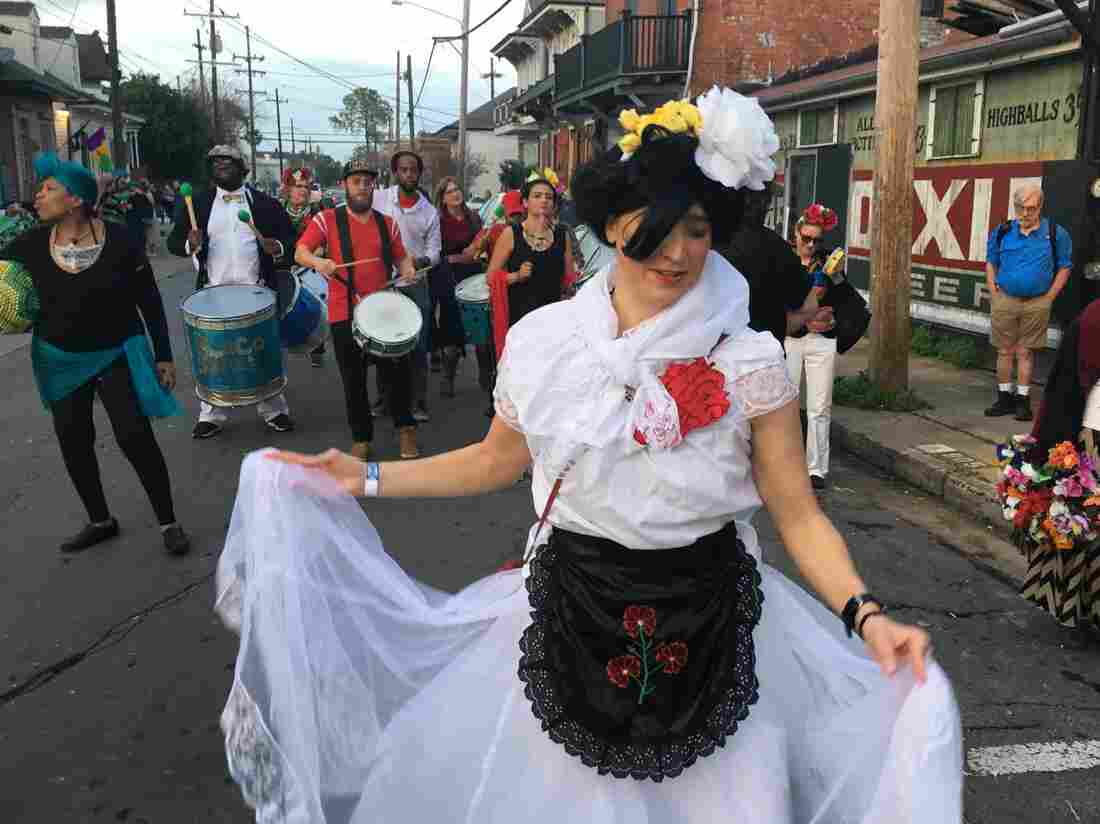 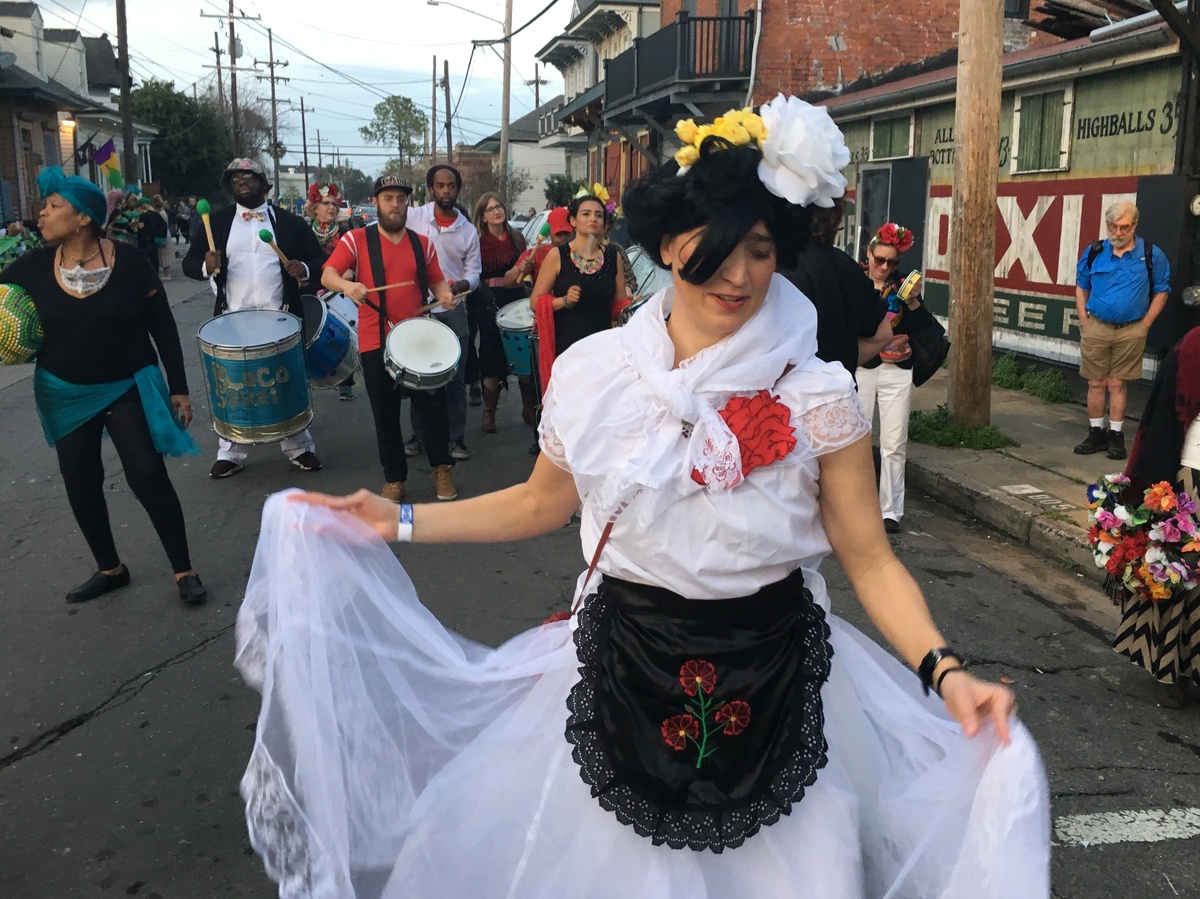 In more than a century of parading, Mardi Gras crowds in New Orleans have seen a lot of different krewes, as the parading groups are called. Krewes have been formed by whites to satirize British royalty, by blacks to satirize those satirizing British royalty, as well as by an all-female group that throws decorated heels into the crowds instead of beads.

Add something new this year: Krewe de Mayahuel, a parading krewe formed mostly by Mexican immigrants to this city.

"At some point I remember saying, there is no Mexicans represented in the culture of New Orleans," said 52-year-old Roberto Carrillo, a native of Mexico City who is one of Mayahuel's founders. He moved to New Orleans 13 years ago along with a wave of other Mexican immigrant construction workers after Hurricane Katrina.

"Parading in the soul of New Orleans, you show the world what you think," he said.

Mayahuel was named after the Aztec goddess of agave, the plant used to make tequila. The group chose the works of Mexican artists Frida Kahlo and Diego Rivera as their theme.

Parading in the soul of New Orleans, you show the world what you think.

Roberto Carrillo, one of the Mayahuel krewe's founders

Mayahuel's two dozen members are mostly in their 20s and 30s. About two-thirds are Mexican immigrants, and the rest are from other Spanish-speaking countries, are American-born Latinos, or are white native New Orleanians. They're office workers, engineers and construction workers.

Members said founding the group is one way to counter the hurtful words they hear in the city and nationwide.

Work After #MeToo: A Restaurant Company Tries To Change Its Culture

In a way, Courtade embodies all that's satirical about New Orleans parading. He and his wife chose not to dress up as Frida or Diego. 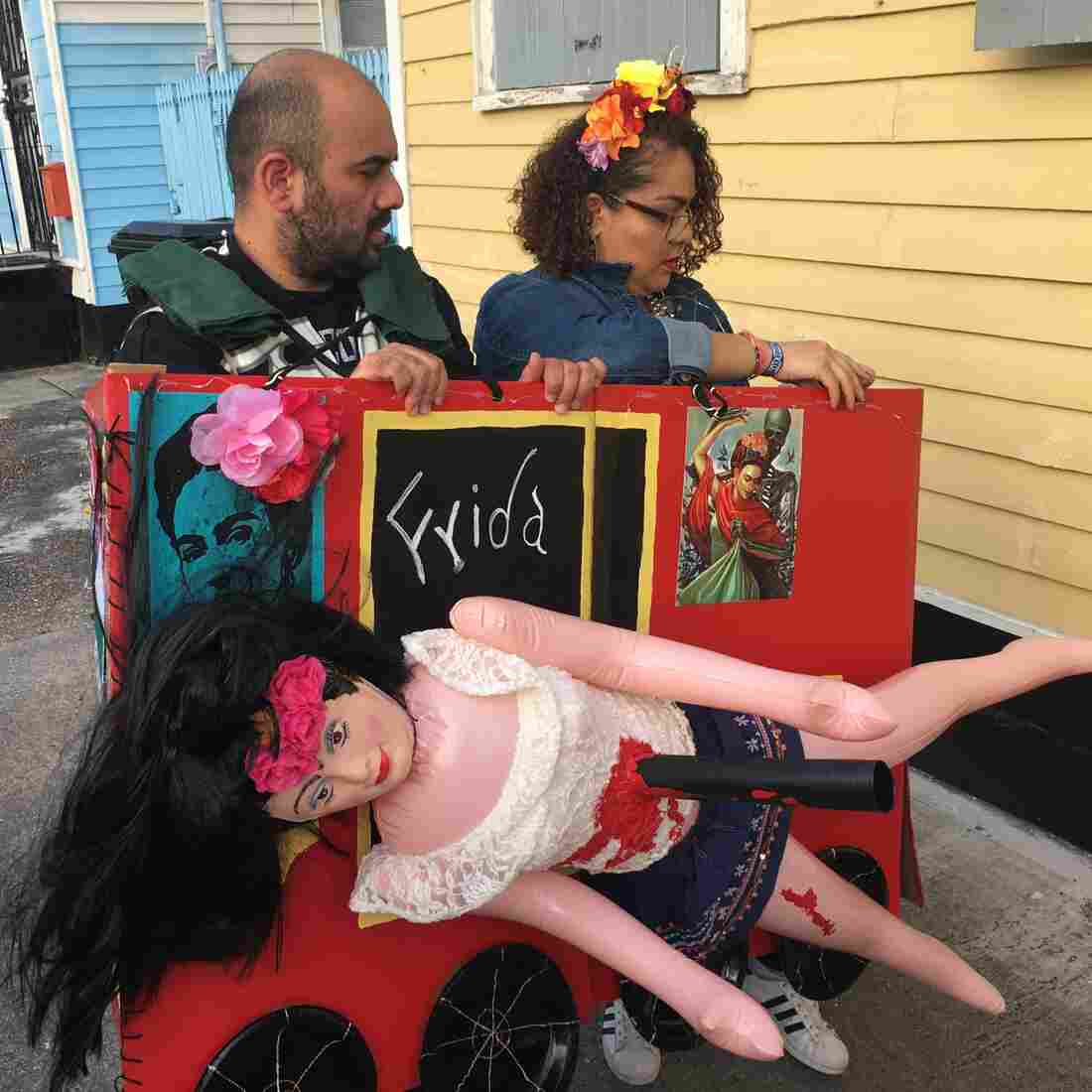 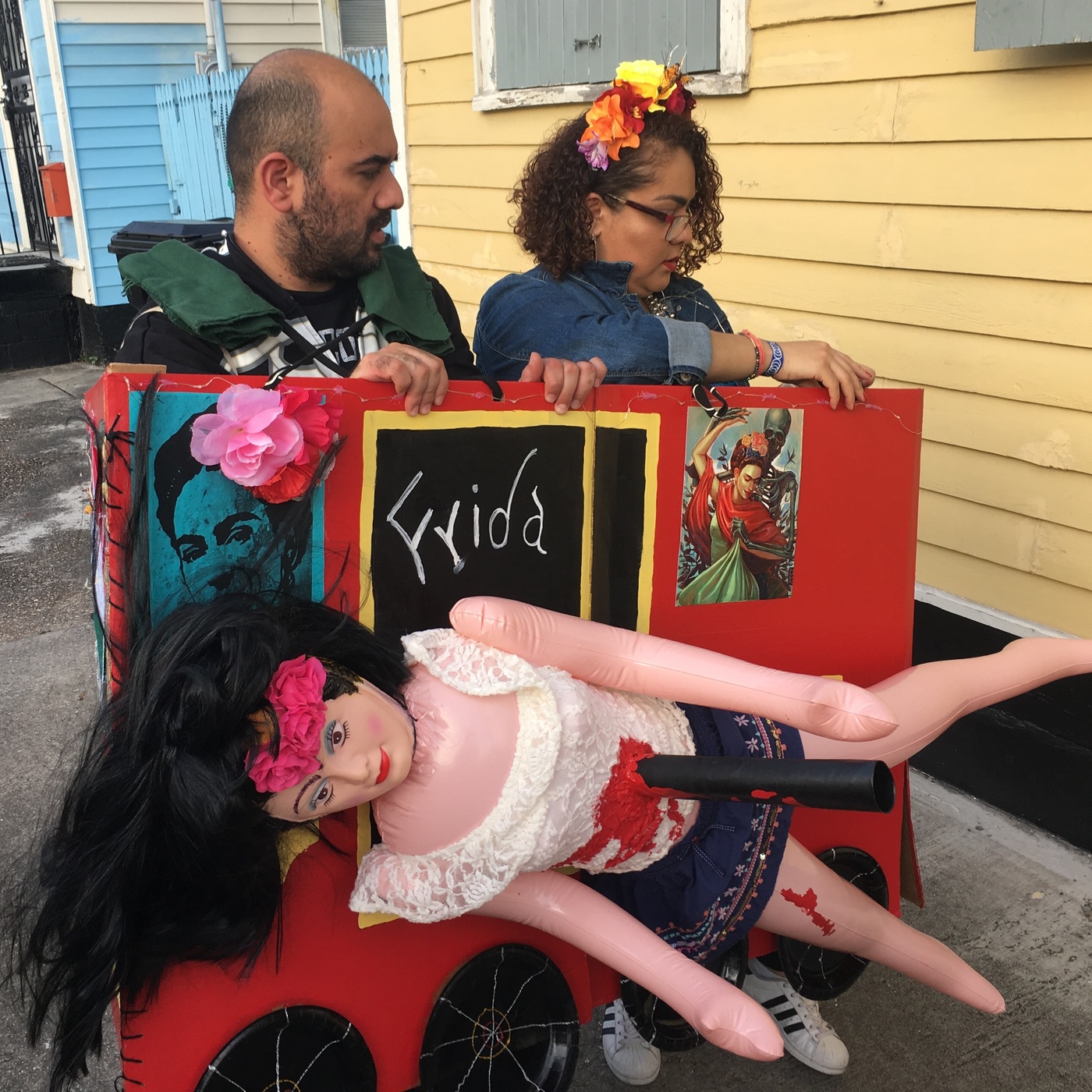 Krewe members Eduardo Courtade and Maria Albarran grew up in Mexico before moving to New Orleans. Their costume depicts Frida Kahlo's near-death accident as a teen.

Instead, Courtade and his wife built a cardboard street car meant to be the vehicle in which Kahlo had a near-death accident as a teen that led to a hospitalization, during which she fell in love with painting. A plastic blowup doll attached to the cardboard oozes red paint from a cardboard pole coming out of her torso.

Mayahuel was invited to parade by Amigos de los Amigos, a krewe founded by Mexicans and Mexican-Americans about 10 years ago. Amigos parades under the umbrella of krewedelusion.

"For me, to see an addition to the Mexicanizing of the parade is something I've always wanted to see," said Texas native Antonio Garza, the founder of Amigos de los Amigos.

"Carnival is such a reflection of what's happening with society," said Rebecca Snedeker, executive director of the New Orleans Center for the Gulf South at Tulane University. "With the long, unfolding history of the city, there's been many groups of immigrants who have moved here and forged a response to carnival this time of year."

Mardi Gras cultures and subcultures are infinitely nuanced and deeply ingrained in New Orleans' history and changing demographics. Some parading krewes, she said, remain exclusive and retain some of the generations-old prejudices, but many krewes, including Mayahuel, are trying to heal those divisions.

"The history of white supremacy and this fiction that white people are better than other people has had such grip on our nation and certainly on this city and place. And there are so many people who together are trying to undo that narrative," Snedeker said.

Mayahuel's politics are subtle but visible. Members pull an Aztec canoe with the words "Viva Mexico" painted on the side. One of the Fridas pushes a cart with the words "Migration is natural." And all of the members wear monarch butterfly pins, a symbol adopted by immigrant rights activists.

In The Big Easy, Food Vendors Create A Little Honduras

Mayahuel member Tiana Nobile likes that this krewe is deeply rooted in Mexican culture but open enough to embrace someone like her, a Korean-American who came to this country when she was adopted.

"I think there's a lot of parallels in terms of migration, forced migration, and finding that solidarity with communities here in New Orleans," Nobile said.

As Krewe de Mayahuel's Fridas and Diegos paraded from New Orleans' middle class neighborhoods to the touristy French Quarter, crowds yelled encouragement. Teenagers as well as senior citizens gushed when they saw one of the krewe's eight Fridas.

Mayahuel's musicians stopped several times along the route to play and sing "Cielito lindo," a classic Mexican song that urges singing in the face of adversity. Many in the crowd sang along.

"It made me feel nostalgic and everything, I think it's great, it's really cool," said New Orleans teacher Eduardo Gonzalez, who lived in Mexico when he was a child.

After parading more than 2 miles in two hours, members plopped down to nurse tired feet at a gas station parking lot. "I have a lot of energy still. ... I just got a few shots of tequila," said Maria Rodriguez, who paraded with a basket of calla lilies, dressed as Diego Rivera's painting The Flower Seller.

Their mission was complete, until next year.