Accessibility links
More Than 1,500 Smuggled Turtles And Tortoises Found At Philippine Airport Some of the animals were wrapped in duct tape, some were mixed into luggage items such as clothing, shoes and cookies. A passenger coming from Hong Kong left the animals at the airport. 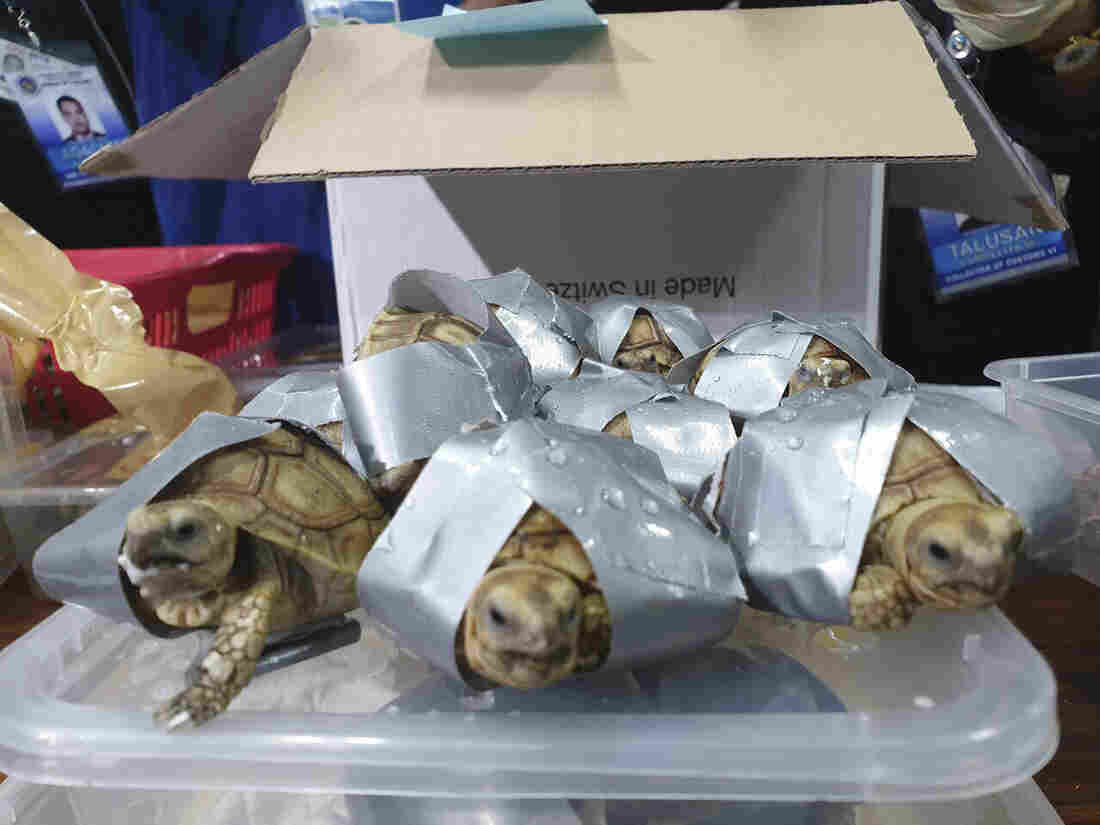 Filipino authorities said that they found more than 1,500 live turtles and tortoises stuffed inside luggage at Manila's airport. Bureau of Customs/AP hide caption 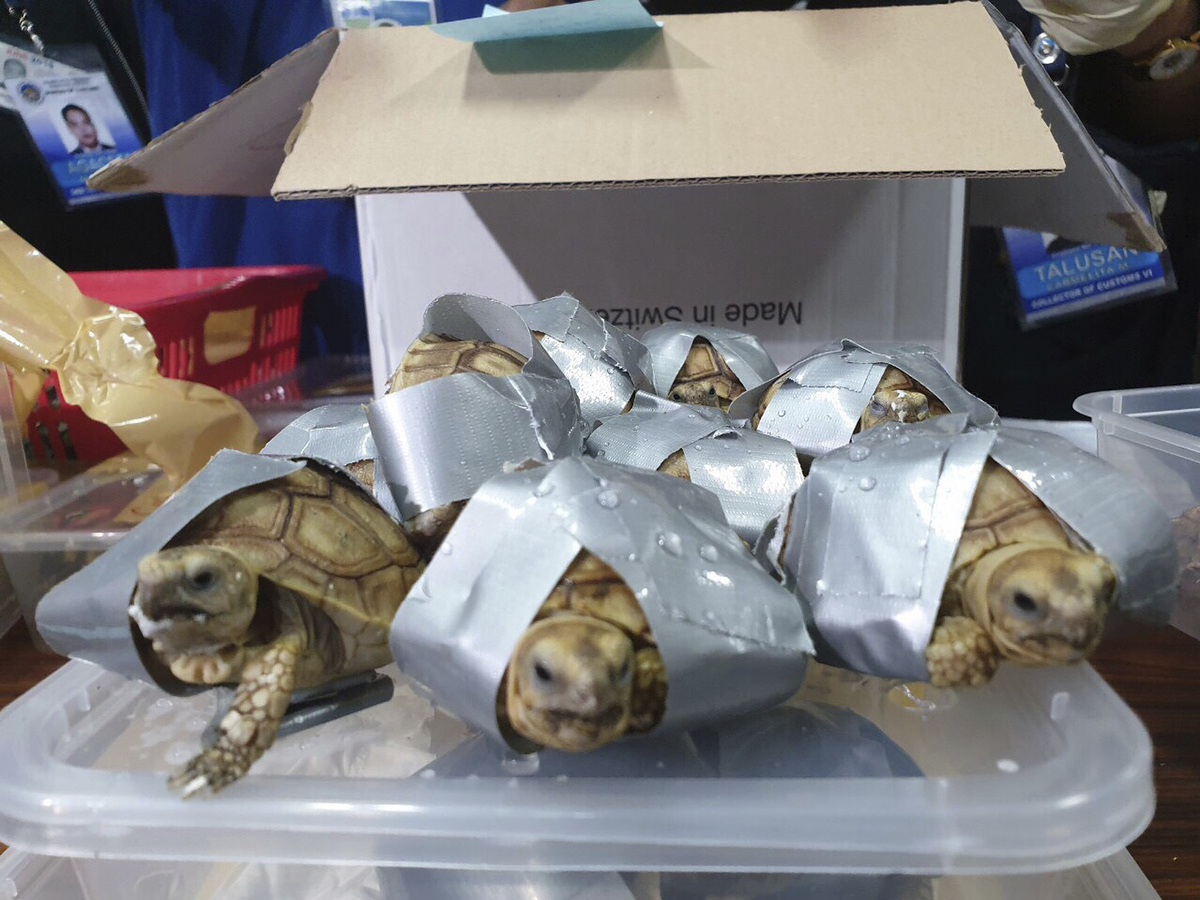 Filipino authorities said that they found more than 1,500 live turtles and tortoises stuffed inside luggage at Manila's airport.

And when they opened them, they found a startling surprise – more than 1,500 exotic turtles and tortoises. Some of the animals were wrapped in duct tape, some were mixed into normal-looking luggage items such as clothing, shoes and cookies.

The items were left behind by a Filipino passenger coming from Hong Kong, the Philippine Bureau of Customs said in a statement.

It's not clear why that passenger abandoned the animals in the airport, though the customs bureau has a guess: "The passenger may have been informed of the vigilance of the port against illegal wildlife trade and its penalties."

In the Philippines, convicted wildlife smugglers can face prison time of up to two years and a fine of up to 200,000 Pesos (about $3,850).

The smuggled animals included Star Tortoises, Redfoot Tortoises, Sulcata Tortoises, and Red-eared Slider Turtles. They've been turned over the officials from the Department of Environment and Natural Resources who monitor wildlife trafficking.

"Turtles and tortoises are often kept as exotic pets, but are sometimes also used as a form of traditional medicine or served as a delicacy across parts of Asia," the BBC notes. "Their meat is considered by some to be an aphrodisiac, while the bones are powdered for use in medicine."

They were found on World Wildlife Day, as Philippine news website Rappler reported. 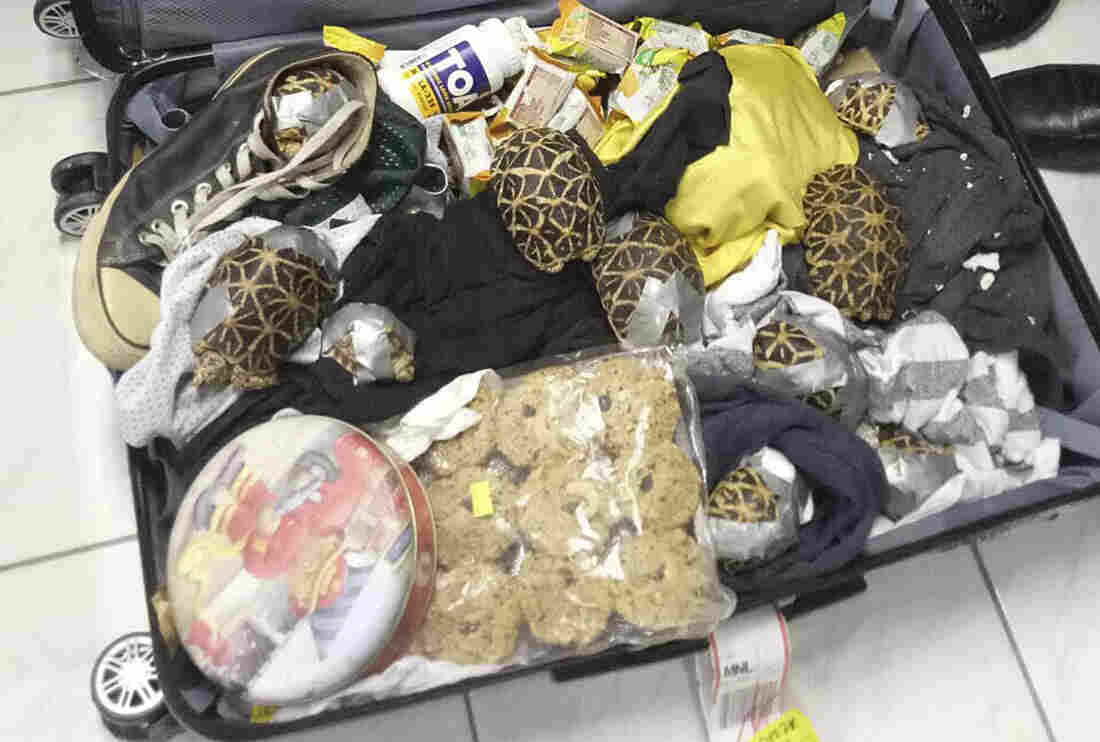 The various types of turtles were found Sunday inside four pieces of left-behind luggage of a Filipino passenger arriving at Ninoy Aquino International Airport on a Philippine Airlines flight from Hong Kong, according to customs officials. Bureau of Customs/AP hide caption

Discoveries of smuggled wildlife are not uncommon in the Philippines. Customs authorities said last year, they turned over "a total of 560 wildlife and endangered species including the 250 geckos, 254 corals and other reptiles," that were found in "air parcels, baggage and shipments."

Turtle smuggling is also an issue in nearby countries. The BBC reported that "last week, 3,300 pig-nosed turtles were smuggled into Malaysia by boat - though this attempt was intercepted by Malaysia's maritime agency."