Accessibility links
Carbon Capture Is A Technology That Wyoming Hopes Will Save Coal The state of Wyoming, the country's largest coal producer, is the site of the Carbon XPRIZE in which entrepreneurs compete to capture carbon and turn it into commercial products. 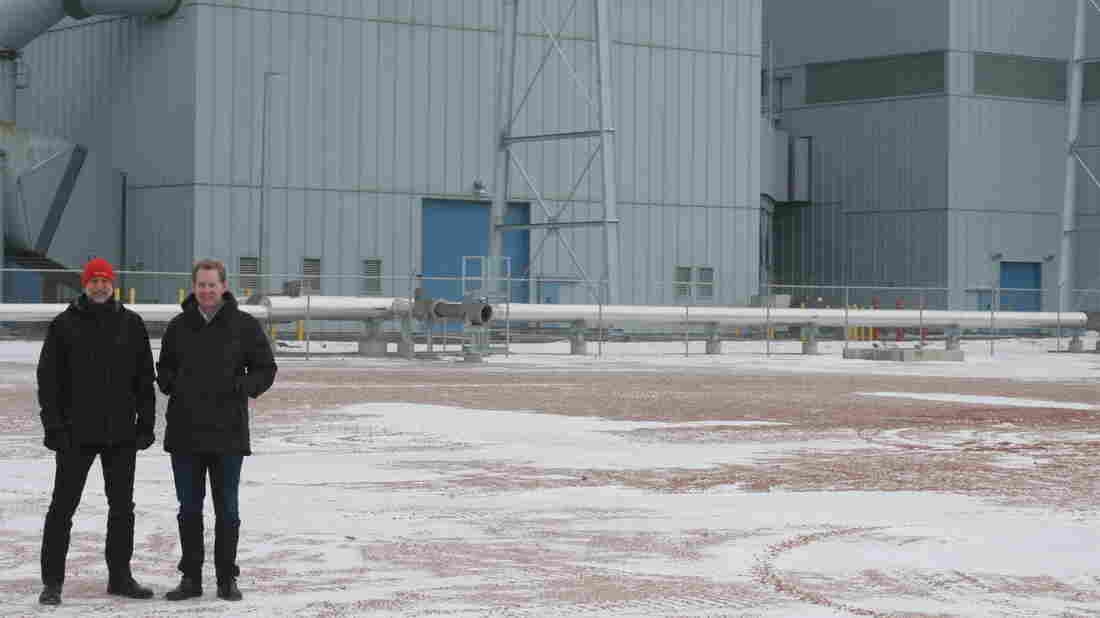 Jason Salfi, left, and Dr. David Erickson, right, of Dimensional Energy, are finalists in the Carbon XPRIZE. They stand in front of the Dry Fork Station coal-fired power plant in Gillette, Wyo., where the competition is located. Cooper McKim/Wyoming Public Radio hide caption 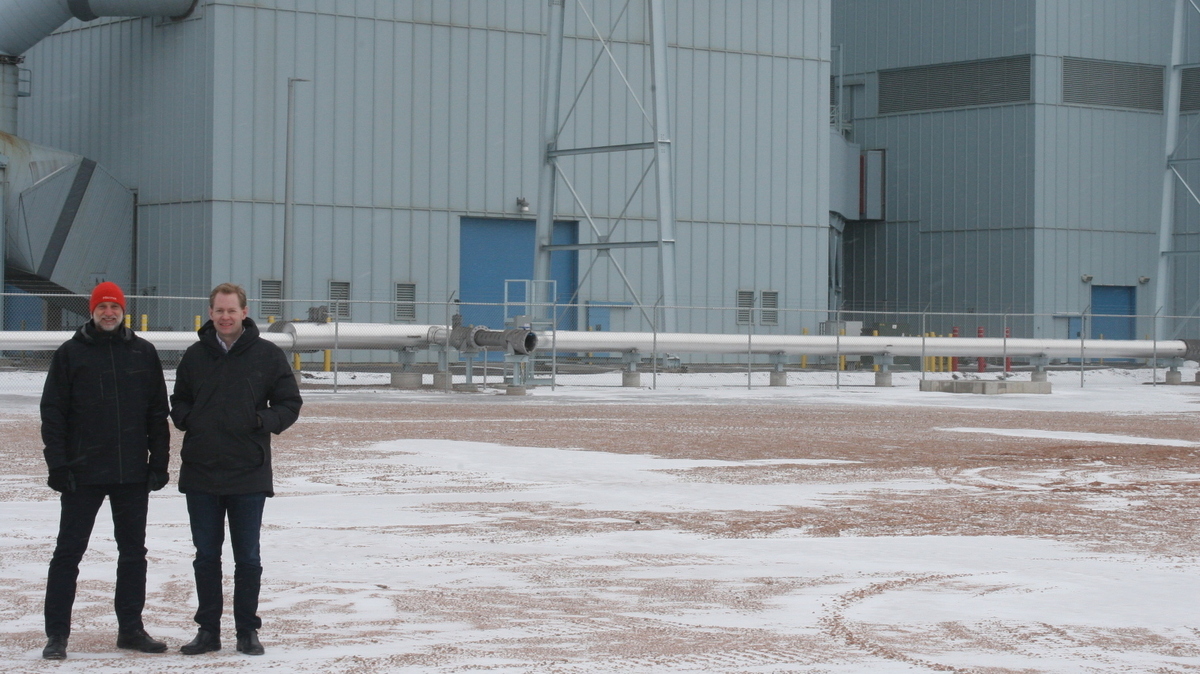 Jason Salfi, left, and Dr. David Erickson, right, of Dimensional Energy, are finalists in the Carbon XPRIZE. They stand in front of the Dry Fork Station coal-fired power plant in Gillette, Wyo., where the competition is located.

Hundreds of train cars extend alongside a road outside of Gillette, Wyo., overflowing with coal. Trucks haul the same energy resource from a large pit on the other side of the road. Gillette is commonly called the coal capital of the U.S.

"Nobody is here in this part of the world. It is so empty. So empty," laughs Sebastian Peter, who traveled to be here from Bangalore, India. His team, Breathe, is one of the finalists in the NRG COSIA Carbon XPRIZE competition.

Four of the five finalists, including Peter, huddle together on an empty gravel lot next to the massive Dry Fork Station coal-fired power plant. A pipe reaches across the front of the lot.

"This is it... this is where they take the flue gas," says Ray DeStefano, operations manager at Dry Fork.

The site will soon be full of mini industrial plants used to transform carbon dioxide into valuable commercial products. Jason Salfi is the CEO of Dimensional Energy and another finalist competing for $7.5 million in winnings. He scopes out where to set up shop.

"We'd be best probably over in there...," he says, pointing. "We're looking for the maximum solar resource."

He wants to combine solar energy with carbon dioxide, "and out the other side we'll be producing high purity carbon monoxide."

High purity carbon monoxide could be used for, say, greener fuel alternatives. Other finalists are using CO2 to create cement, plastics, and adhesives. During the competition, each finalist will work to scale up their technology and demonstrate its potential. 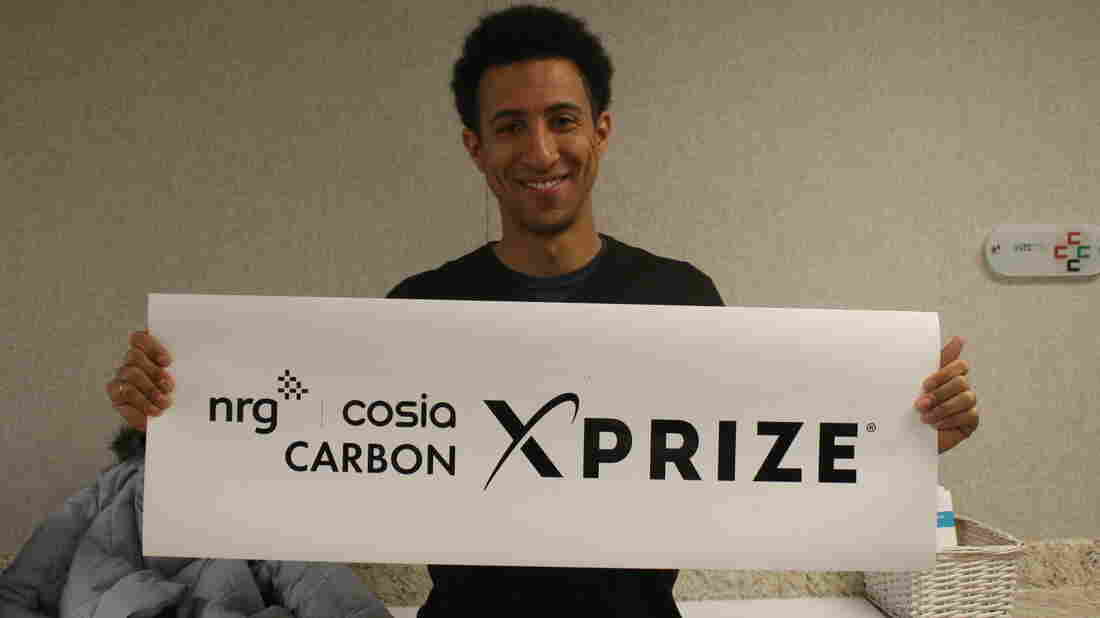 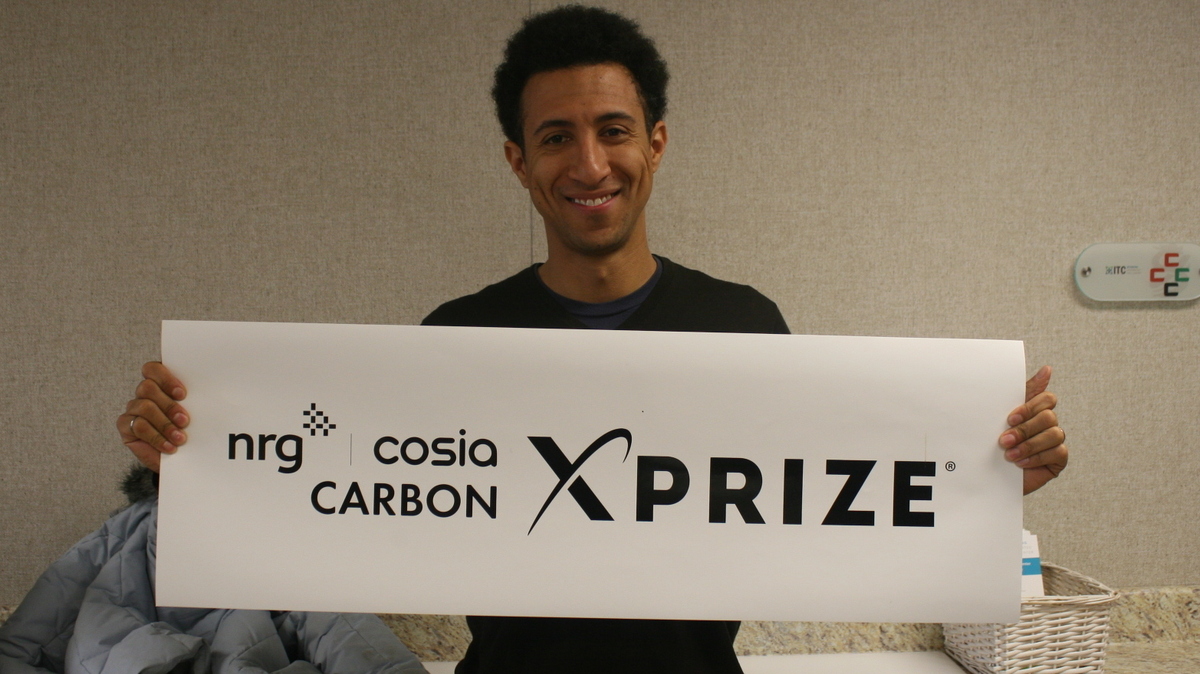 "This isn't regular everyday engineering project," Marcius Extavour, who runs the Carbon XPRIZE competition. He says it's about changing the narrative around carbon dioxide.

"We know carbon dioxide, it's causing a big problem. It's driving climate change and if we don't do something about it we're in for a more and more serious future," Extavour says.

No one has done the work that we have in the policy framework... So, we're really poised to be the nation's leader in this technology.

Moving our energy sources away from fossil fuels to renewables is the most common go-to in mitigating climate change, but climate experts say more is needed. The Intergovernmental Panel on Climate Change report says keeping global temperatures within a livable range would be too expensive without carbon capture. The International Energy Agency also says carbon capture is "one of the only technology solutions that can significantly reduce emissions from coal and gas power generation and deliver the deep emissions reductions needed across key industrial processes."

But the technology needs to develop a lot faster than it is now. One scenario requires carbon capture annual rates to improve by over 7000 percent by 2040.

Extavour has faith this competition will help move the industry forward.

"There is enough time but we have to get cracking in a serious, serious way," he says.

The federal government seems to agree. The U.S. Department of Energy has already invested billions of dollars in the technology including funding for several demonstration projects. Last year, Congress adopted a tax-credit to stimulate carbon capture projects; its expected to trigger a billion dollars of new investment in six years.

"No one has done the work that we have in the policy framework... So, we're really poised to be the nation's leader in this technology," Gordon says.

For example, the Carbon XPRIZE competition is being hosted by the private- and state-funded Integrated Test Center, designed to to study the capture, sequestration and management of carbon emissions. Gordon says a thriving carbon capture industry doesn't just help emissions, it prolongs coal's life. Wyoming provides 40 percent of the countries' coal and it is one of the top five revenue sources for the state.

"It seems incredibly important at this stage that we are invested in trying to revitalize coal assets that we have; give them new life, give them new purpose," Gordon says.

But time is running out — coal has become increasingly uneconomic and coal plants are shutting down across the country. Right now, according to the Institute for Energy Economics and Financial Analysis, adding carbon capture to the average coal plant would triple the cost of electricity.

"It's a very expensive technology and very little evidence the expense of the technology can be cut significantly especially given the competition," says Dennis Wamsted of the Institute for Energy Economics and Financial Analysis.

Right now, carbon capture sequesters only 0.1% percent of total global emissions. The timeline to improve that number is short. Coal consumption is already historically low — the Energy Information Administration predicts another decline of 23 percent by 2050.

"In my opinion, perhaps the race is already over," Wamsted says.

XPRIZE's Extavour does not agree.

"The race is on and it's a pressure cooker now."

Finalists will begin to demonstrate their technology later this year with judges choosing a winner in June of 2020.