Accessibility links
Book Review: 'A Friend Is A Gift You Give Yourself,' By William Boyle William Boyle's new novel follows mob widow Rena, her granddaughter and an ex-porn-star neighbor, on the run from a crazed mafia enforcer in — what else? — a 1962 Chevy Impala.

'A Friend Is A Gift' For Crime Novel Fans

'A Friend Is A Gift' For Crime Novel Fans 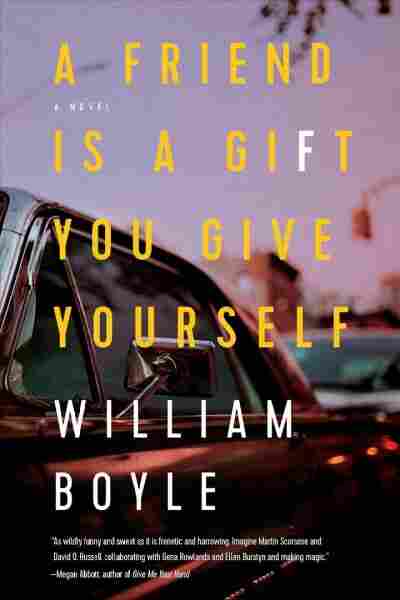 A Friend Is a Gift You Give Yourself

Rena Ruggiero is a mob widow. She lives alone and rarely interacts with her neighbors. That changes when her 80-year-old neighbor Enzio shows up and propositions her. She feels sorry for the old man, so she ignores her apprehension and agrees to have a cookie at his place. Enzio shows her a pornographic movie and touches her. Twice. Scared and angry, Rena hits him in the head with an ashtray. Enzio crumbles, splitting his head open against the table on his way down. Rena thinks she killed him. She panics, steals Enzio's '62 Impala, and flees to her estranged daughter's home in the Bronx. She wants help and to reconnect with her daughter and granddaughter, Lucia, but her daughter turns her away at the door.

Questioning Authenticity — And Reality — In 'The Made-Up Man'

'Horse Latitudes' Is A Gripping Mix Of Genres

With A Friend, Boyle has written a mafia narrative focusing on the women at the periphery instead of the men at the core. He's also borrowed the Final Girl trope from horror fiction and subverted it, creating not scream queens but determined survivors. Rena, Lucia and Lacey are hustlers, not victims, and to be a hustler "is to be free of some agony that regular folks seem to hold on to. Hustlers know the quick demise, failure no stopping force. You have to hustle through failure." That's what these women have always done, and they don't stop just because a couple of killers end up chasing them out of comfort and into the unknown.

Boyle has a knack for violence and telegrammatic prose. He uses dialogue to tell the stories of his characters and push the action forward, and when no one's talking, his writing is fast and sharp, with a touch of literary flair:

She has this tragic look on her face, something like the time she had pneumonia in fifth grade, frail as garlic paper, convinced she was dying. She shrivels to the ground, blood seeming to swarm from her neck like a blur of red moths, her hand in the flow like she's trying to choke it to a stop. Those long nails of hers, that's what Rena focuses on. Gurgling noises sputter from Adrienne's mouth.

With 'A Friend,' Boyle has written a mafia narrative focusing on the women at the periphery instead of the men at the core.

A Friend is a Gift You Give Yourself is a rarity; a fresh novel about New York's underbelly. Crime writers have tackled this city for decades, but Boyle brings something new to the table: An unashamed appreciation for the way the city's past affects its present and shapes its future. For example, Enzio, a secondary character, remembers the best moments of his life, and they all take place in New York:

The Dean Martin hero from Lioni's. A perfect egg cream at Hinsch's. His Impala, of course. Being in the stands when the Dodgers won the Series in '55. A hot dog from Nathan's on the Boardwalk in the summer, just sitting there on a bench, watching the Wonder Wheel and watching the women on the beach and watching all the seagulls swoop down for tossed-away bread.

Crime fiction usually stays within the confines of the genre, but Boyle breaks away from those restrictions. This is a crime novel, but also a madcap road trip narrative, a story about friendship, an ode to New York, and a look at the importance of reinventing yourself. There is plenty of death and violence here, but also hope and redemption, making for a memorable, satisfying read.