Accessibility links
Review: 'Captain Marvel' Flies Solo, But Takes Few Chances A couple of indie writer/directors get to play in the Marvel sandbox in this film about an intergalactic warrior (Brie Larson) who arrives on Earth with a warning about a secret alien invasion. 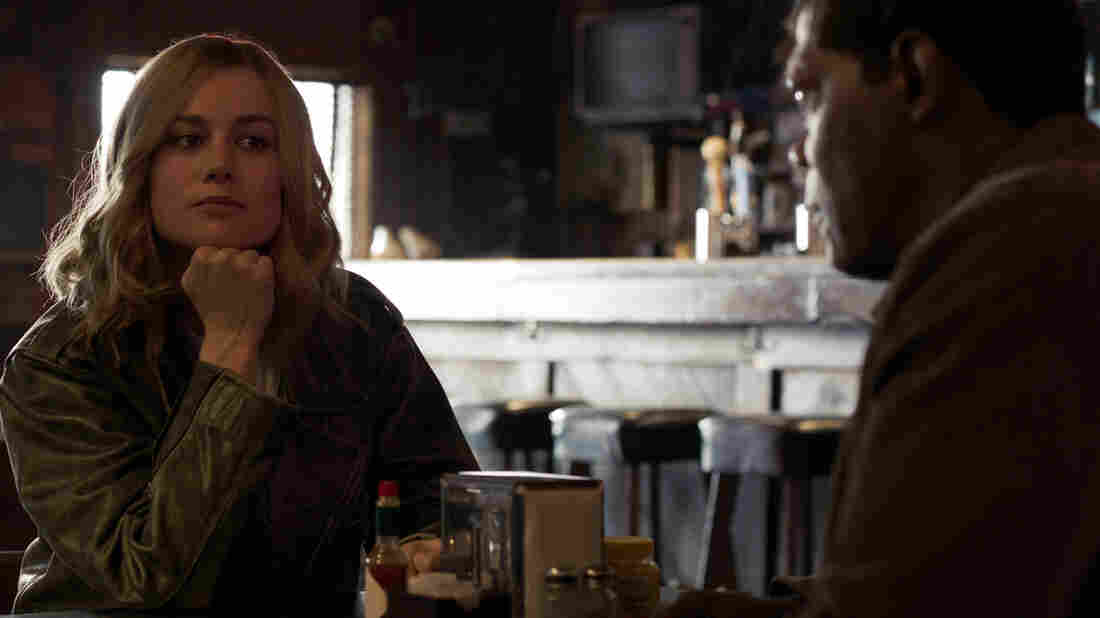 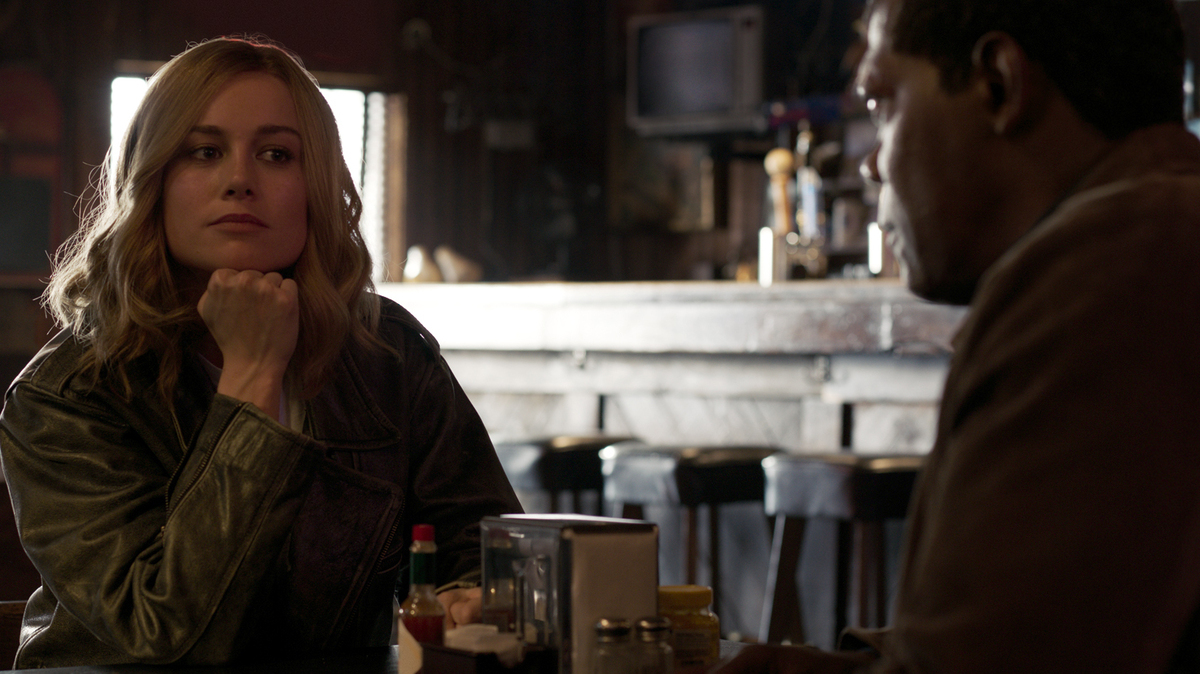 There are several moments in Captain Marvel — most of them intimate two-hander scenes between Agent Nick Fury (a digitally de-aged Samuel L. Jackson) and the main character (Brie Larson) — where the performances click, the comic chemistry catalyzes, the dialogue buzzes and everything in this latest million-dollar superhero blockbuster seems downright ... breezy.

Now: It's a practiced breeziness. A studied breeziness. A breeziness that doesn't feel forced, exactly, but that certainly feels enforced. Because as they trade quips and cracks and grins while expositing about an intergalactic war between two alien races, you react to the quips and cracks and grins with a sense of satisfaction, as down deep in your forebrain, your unconscious knows that this right here is the part of the Marvel superhero movie where they do the quips and cracks and grins. And that they will soon get interrupted by the bad guy. And that there will then be some (quite good) fight choreography. And that some venerated veteran actor (why, hello, Miss Annette Bening!) will show up in a goofy outfit to deliver hokey dialogue at precisely 23 percent of their ability and stand around looking just you know wildly incongruous.

You know all this not because you saw the trailers (though the trailers give away all the best stuff, including far too much of the plot), but because Marvel has been churning out million-dollar superhero blockbusters for over a decade now. They know how to do them — and you know how to watch them. And that means knowing, for example, that when the Big Reveal shows up to kick off the third act, right on schedule, it'll be neither big nor particularly revelatory. It never is. And that's fine.

OK, Let's Talk About The Ending Of 'Avengers: Infinity War'

It's fine, because we have arrived at a cultural moment when audiences enter a million-dollar superhero blockbuster with a set of tacit expectations and a series of boxes to be checked, and Captain Marvel dutifully checks them. And if that sounds less than ambitious, consider the very real and substantial sense of satisfaction that a well-checked box engenders. It's not surprising, no. But it's not nothing.

Co-directors Anna Boden and Ryan Fleck (who wrote the screenplay with Geneva Robertson-Dworet) hail from the world of talky indies like Half-Nelson and Sugar, which might explain why their film about a doughty space warrior that features so many space dogfights and space explosions feels most at home on Earth.

There's an extended chase scene, for example, that takes place on the surface streets of Los Angeles' wholesale district — the very same sun-blasted, bleached-out asphalt across which so many brown-suited guys in Dodge Chargers once chased Jim Rockford, Steve Austin, the A-Team, and all six of Charlie's Angels.

It's one familiar element among many that make Captain Marvel feel smaller than you'd think, given its intergalactic scope: There are the Kree, see, a proud warrior race locked in a war with the shifty — and shapeshifty — Skrulls. (For those scoring at home: The Kree look like Jude Law, the Skrulls look like if Nosferatu and a Gila monster had kids.) Our hero is a Kree. (Nobody calls her "Captain Marvel" in the movie; most of the time she goes by "Vers," pronounced "Veers" — which is weird, but less weird than her fellow Kree soldiers who get stuck with names like Minn-Erva, Yon-Rogg and ... wait for it ... Mar-Vell.)

Captain Marvel lands on Earth in the mid-1990s (a fact the film has just enough fun with), runs into a still-binocular Nick Fury and the two promptly (very promptly! more promptly than seems wise, frankly!) set about looking for exactly the kind of glowy energy-core thingy you fully expect them to, because you've seen a damn Marvel movie before.

Now if you're a filmmaker looking to check the "bad guy" box, you could do a hell of a lot worse than checking it with Ben Mendelsohn. Yeah, the guy has been racking up the sci-fi bad guys on his IMDB page lately, but here, as Talos the Skrull, he gets to relax a bit and have some fun. So do we. (Put it this way: The Skrull homeworld must have an East London.)

Of course, amid all the familiar hallmarks, the genre tropes, the checked boxes, one thing about the Marvel superhero blockbuster Captain Marvel is legitimately new: the fact that its star is a woman. And while the filmmakers spend some time underlining this in all the ways you anticipate (both Hole and Heart on the soundtrack guys!) they've carefully crafted the film to supply at least some young women with the kind of on-screen, butt-kicking, name-taking proxy young boys have enjoyed for decades. It outfits our hero not with a blandly handsome male romantic partner, but with a supportive, badass female friend (Lashana Lynch) with whom to ace the Bechdel test like they swiped the answer key.

Some will begrudge the filmmakers this liberty; some are wrong.

Larson imbues her character with a confidence that shades into cockiness, especially around Jackson's Nick Fury but doesn't quite sell us on the film's Big Reveal, or its lesser emotional beats. It's tough to emote when you're lit up like a flying Christmas tree, I suppose.

Oh, and one more: There's a scene near the end, the big one, the one in which the film's themes of toughness and resilience get driven home. The music swells and we watch our hero ... do something. (If you've seen the trailers, you know the moment I mean.) And it's supposed to stir us. It's supposed to make us cheer. But it doesn't, quite.

It should, it's trying to, but it doesn't.

Because that moment, like so many things about Captain Marvel, is something you've seen before. So sure, it's satisfying, in that unconscious, soothingly familiar way.

But the first time you saw it? On the Buffy the Vampire Slayer series finale? That — now that was something.