Accessibility links
Police Arrest 84 After Stephon Clark Protest In East Sacramento A prominent pastor and other clergy members were arrested, and several reporters were detained after protesters entered an affluent, mostly white neighborhood. 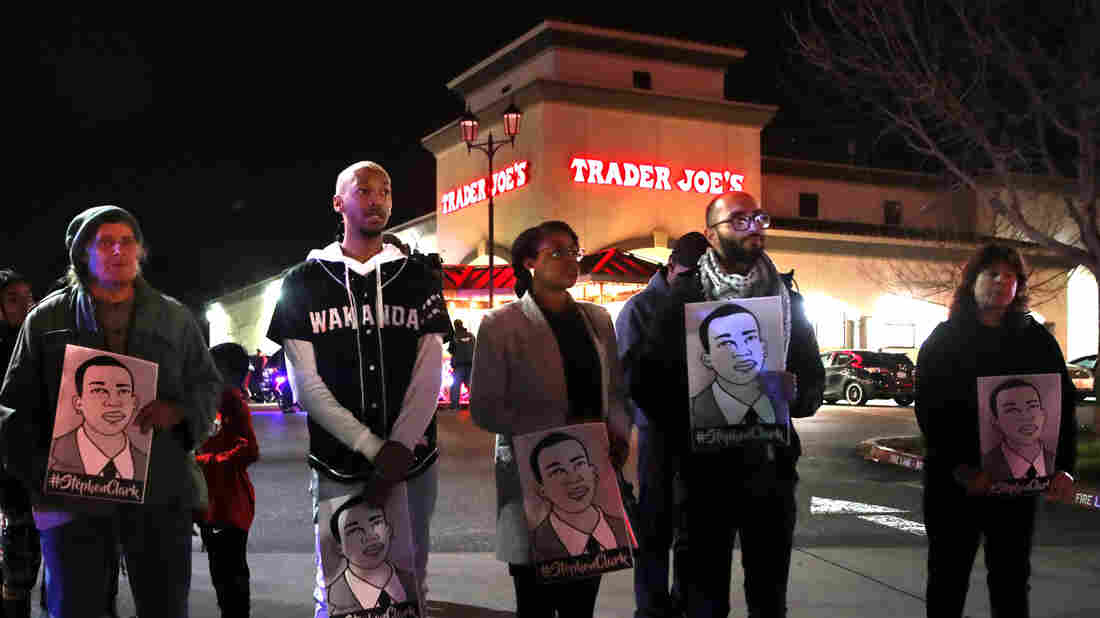 Demonstrators in California took to the East Sacramento streets on Monday to march in protest of the decision to not charge Sacramento police officers who shot and killed Stephon Clark last year. Justin Sullivan/Getty Images hide caption 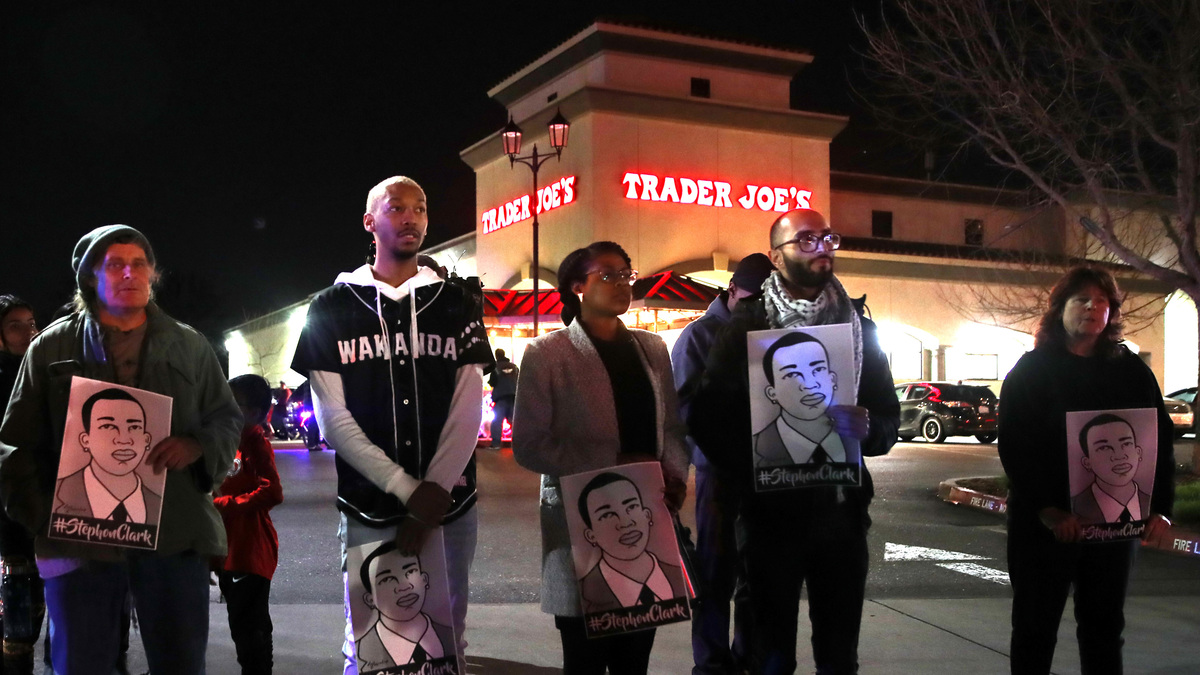 Demonstrators in California took to the East Sacramento streets on Monday to march in protest of the decision to not charge Sacramento police officers who shot and killed Stephon Clark last year.

Those arrested included pastor Les Simmons, a prominent figure in actions around the Clark cause. Other clergy members were also arrested, as were college students who were part of a group that recently held a sit-in protest that shut down the Arden Fair Mall. At least three local reporters were also detained.

The march comes two days after Sacramento County District Attorney Anne Marie Schubert announced she would not file criminal charges against the two police officers who killed Clark, a 22-year-old unarmed black man who was fatally shot after police chased him into his grandmother's backyard.

The police response to Monday's march was a stark contrast to last year, when officers made only a handful of arrests despite protesters shutting down Interstate 5 and blocking NBA fans from entering a Sacramento Kings game.

While previous demonstrations over Clark's death focused on downtown Sacramento, this was the first to take place in a wealthier, predominantly white part of the city.

"We've had protests in other neighborhoods and this kind of response has not happened," said Tanya Faison, the founder of the Sacramento Black Lives Matter chapter. "It proves that everything our DA has said, everything our chief has said and everything our mayor has said was all words." 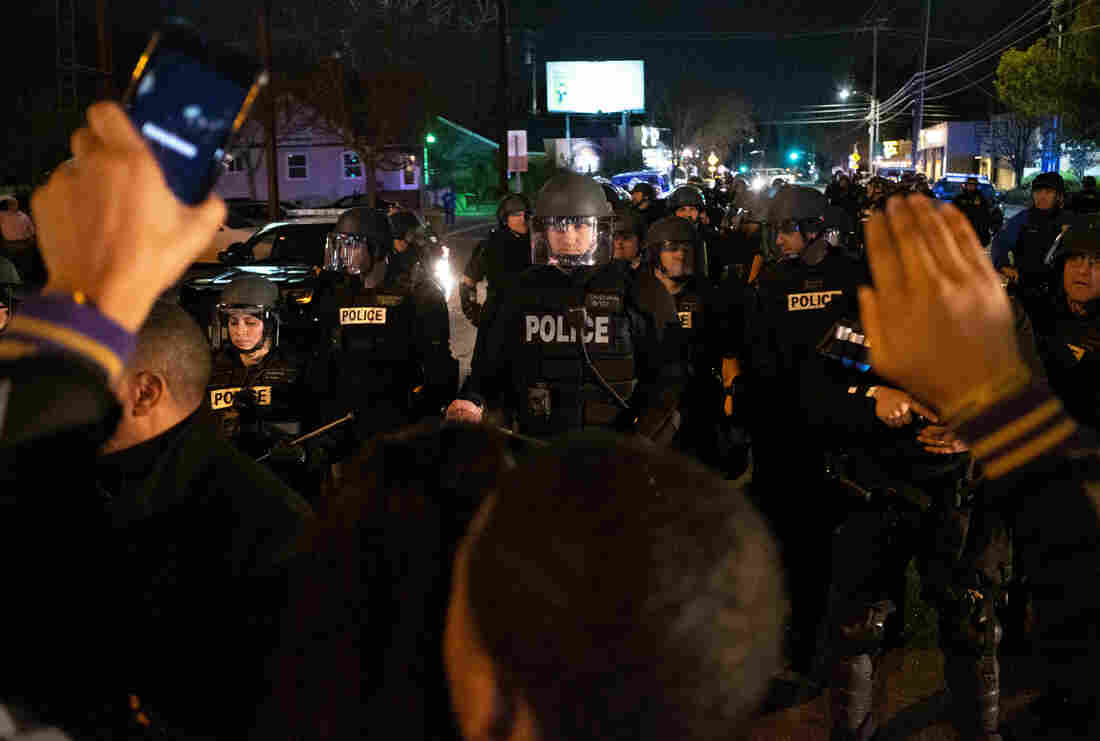 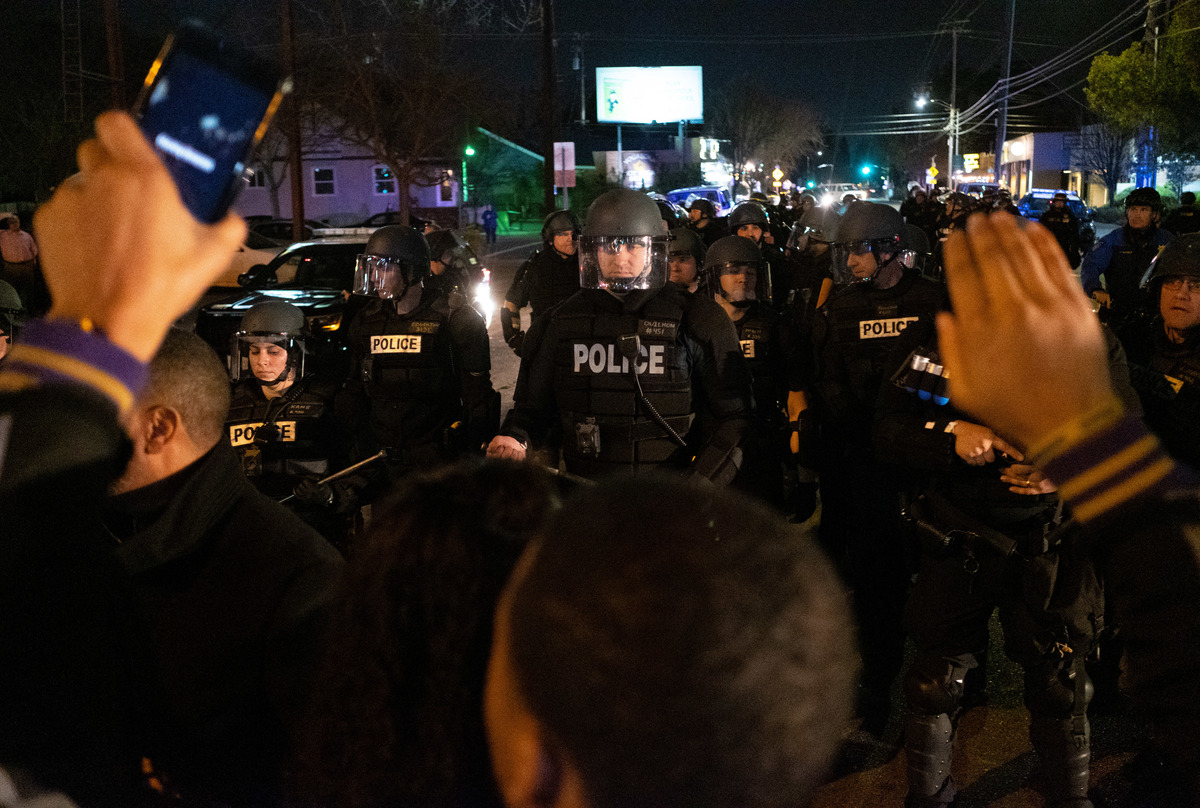 Police form a barrier to block demonstrators in East Sacramento.

The march began around 6:30 p.m. at a Trader Joe's grocery store on Folsom Boulevard, winding through the "Fab 40s" section of East Sacramento before making its way back to Trader Joe's around 9 p.m.

Many East Sacramento residents said they disapproved of demonstrators targeting the neighborhood but would not go on the record with NPR member station Capital Public Radio. Others were supportive, even joining the march.

Laura Dunkelberger, who lives blocks away from the grocery store where the march began, said she joined the demonstration after learning about it on social media.

"It seems like everyone in this neighborhood is in fear driving off," she said. "I saw this on Twitter and was like, 'I'm going to come support.' " 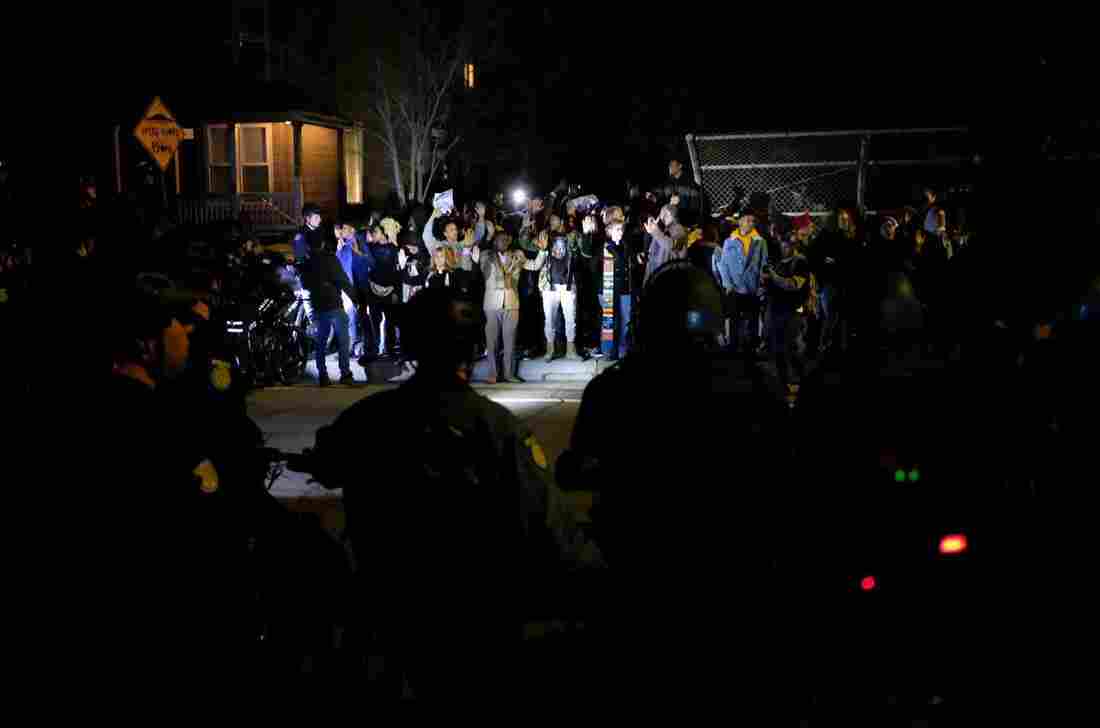 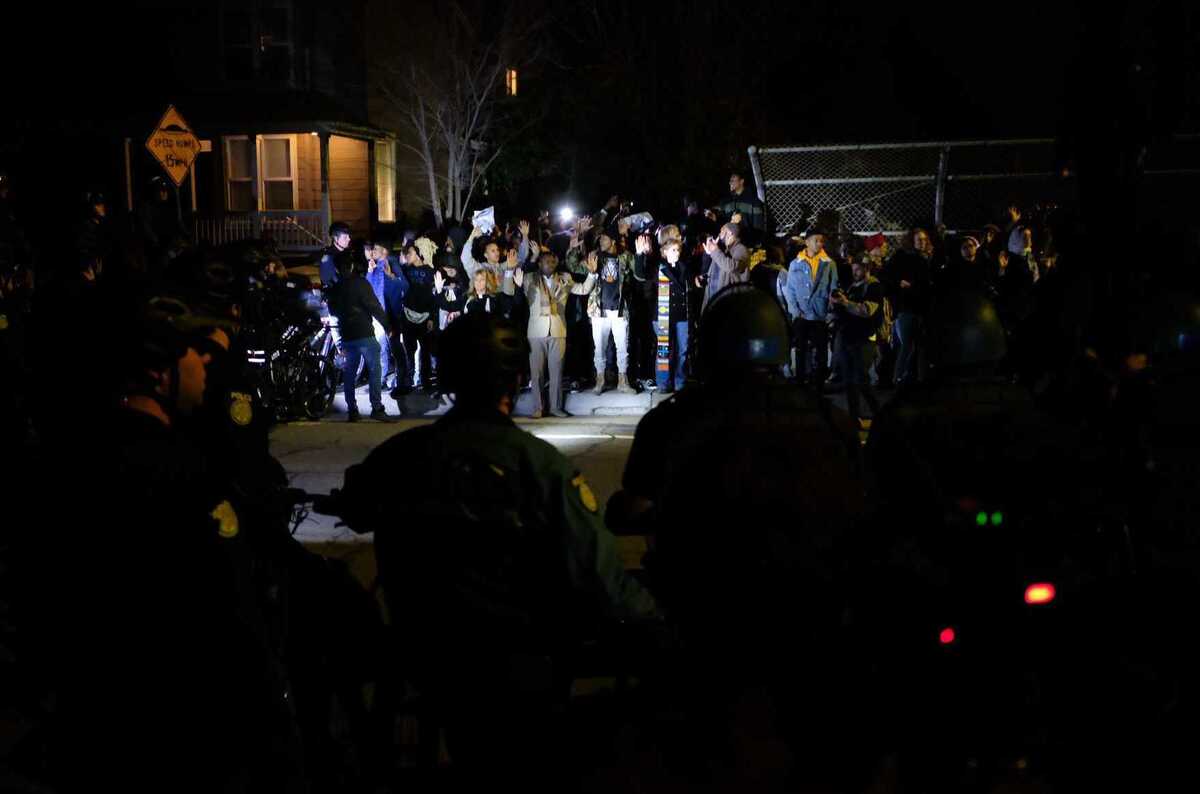 Demonstrators stand on the 51st Street bridge over Highway 50 after a protest in East Sacramento.

Police spokesperson Sgt. Vance Chandler said the arrests took place after a property owner reported that cars in the area had been keyed. He says officers gave 10 orders to disperse because of unlawful assembly over a two-hour period.

"Shortly after we started monitoring the group at [approximately] 7:30 p.m., we established the group was unlawfully assembling by standing in the street," Chandler said "We also received information that multiple vehicles in the area were vandalized."

After police ordered demonstrators to disperse, protest organizers began to encourage people to leave. Some did, while others stayed near the grocery store parking lot and eventually moved down 51st Street to a bridge over Highway 50. Chandler said six people were arrested near the parking lot.

Demonstrators moving onto the bridge were blocked by a line of police officers. Police began detaining and arresting people in small groups, eventually arresting nearly 80 people.

"I was following the marchers as they crossed the freeway overpass on 51st Street," said Dale Kasler, a reporter for The Sacramento Bee who was detained and released without being arrested. "It became apparent as we got to the other side that there was nowhere to go and that the police had basically sealed everything off.

"There were 50, 60, 70 people all just sort of cordoned off into this small area at the south end of the overpass," Kasler said. "They just came and started detaining everyone, one by one. And I got caught up in that."

Here is a picture of Sacramento Bee reporter @dakasler being detained by Sacramento police right now. He was put in twist-ties while covering tonight’s Stephon Clark protest. Several pastors have been detained as well, and reportedly other journalists. No update from PD. pic.twitter.com/W8HTxJOs61

The sidewalk was lined with dozens of people who sat with their hands twist-tied behind their backs, waiting to be loaded into vans. Chandler said they were to be transported to an off-site location — later identified as Cal Expo, the site of the California State Fair — and processed. From there, they would be either cited or arrested.

Law enforcement is loading detained individuals into vans and taking them to a location, we don't know where, there's going to be a press conference shortly #StephonClark pic.twitter.com/oYjv8wBQIX

Despite the large number of arrests compared with previous demonstrations, Chandler said Monday's response did not reflect any change in how the department handles public protests.

The goal, he said, is for police "to make sure we keep our community safe and allow people the opportunity to express themselves in a peaceful manner without causing any harm to people or causing any property damage."

Sacramento Mayor Darrell Steinberg tweeted he was disappointed in how the protest ended but had questions about what led to the arrests.

"No matter the reason an order to disperse was given, no member of the press should be detained for doing their job," Steinberg wrote.

The dozens of arrests surprised many of the activists who left after the initial dispersal orders from police.

"I'm pissed, I'm angry. I'm frustrated," said Berry Accius, an organizer with Voice of the Youth. "I thought everything was cool, we were about to end the protest ... we accomplished what we wanted to accomplish and to get a phone call 30 or 40 minutes later and hearing my comrades, some of my friends, [pastor] Les Simmons, some of my young people that I was with protesting shutting down the mall have been arrested today, and all for what?"

Clark's death made national headlines and added another layer to an ongoing conversation about the police use of deadly force, particularly against black men. The police shot Clark seven times, including three times in the back, the official autopsy found.

The officers, Terrence Mercadal and Jared Robinet, were responding to a 911 call of a man breaking car windows in the South Sacramento neighborhood of Meadowview. The two officers pursued Clark into a backyard, which they later learned was his grandmother's home, and shot him. The officers said they believed Clark had a gun, but police only discovered a cellphone next to his body.

Less than a week after Clark's death, the police department released body-camera and helicopter videos from the shooting, prompting large protests. In one gathering, demonstrators spilled into the streets of downtown Sacramento, brought traffic on Interstate 5 to a stop and blocked thousands of fans from entering the Kings' game with the Atlanta Hawks.

Nearly a year after Clark's death, the district attorney's decision not to charge the officers renewed outrage over the case. Critics, including Clark's family, also said it was inappropriate for Schubert to publicize the young man's text messages, Internet searches and drafts of emails that were pulled from his cellphone. She presented those records as signs that Clark was troubled.

"She used that as a smear campaign or a fake way to justify and condone," Clark's mother, Se'Quette Clark, told NPR this weekend. "Her officers weren't doing — she never once addressed their actions. She presented and painted a picture of my son that was her opinion."

On Monday, the Kings announced increased security around the Golden 1 Center before that night's game, including closing the arena plaza and some Downtown Commons stores. The Downtown Sacramento Partnership also sent a notice to businesses warning of "possible traffic delays and protests."

An earlier version of this story misspelled Dale Kasler's last name as Kalser, and Laura Dunkelberger's last name as Dunkleburger. In addition, we incorrectly referred to the group Voice of the Youth as Voices of Youth.