Accessibility links
Book Review: Mitchell S. Jackson's 'Survival Math' Is A Brilliant Memoir In Essays Author Mitchell S. Jackson trains his formidable linguistic skills on his turbulent youth growing up in a poor black community in Portland, Ore., one of the whitest cities in the country.

'Survival Math' Is A Spellbinding Narrative In Essays

'Survival Math' Is A Spellbinding Narrative In Essays 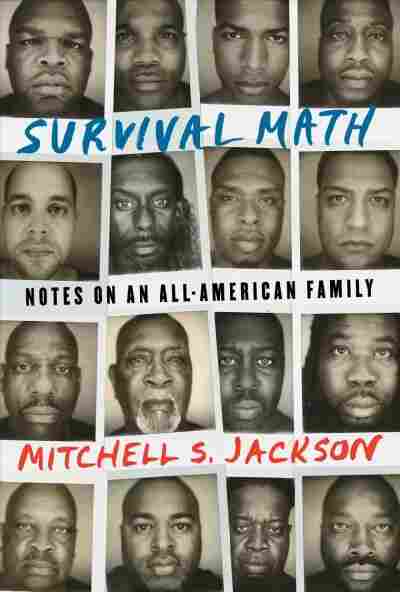 Notes on an All-American Family

The biggest challenge in describing Mitchell S. Jackson's Survival Math: Notes on an All-American Family is whether to be appropriately effusive and risk seeming like I'm in his pay — or to be more tempered and risk underselling the brilliance of this memoir in essays. (It's probably clear where I landed.)

Already an award-winning author for his novel The Residue Years, Jackson trains his formidable linguistic skills on his turbulent youth growing up in Northeast Portland — a poor black community in Portland, Ore., one of the whitest cities in the country. The challenges Jackson confronts are numerous, including — but sadly not limited to — witnessing in childhood the beginning of his mother's drug addiction; the violent encounters associated with his own drug dealing; multiple gang-related deaths of friends and classmates; and spending his formative years with male relatives employing women as sex workers.

Jackson makes it plain, however, that dire as these circumstances may have been, they existed alongside multiple loving relationships within and beyond his family. One of the places this is most evident is his essay, "Composite Pops." He writes:

"And if a boy isn't blessed with a dad or gifted with a dynamic stand-in, he must find ways to forge one. He must identify the fatherish men in his life and be open to receiving what he needs from them. ...I had a father, and I had one because I made one. Or rather, I composed a father from the men at hand."

Among these was Big Chris who, when he began a long-term relationship with Jackson's mother, was "a neophyte soon-to-be-prosperous pimp but also a smart, witty, compassionate man whose jokes could give you a stomachache." More importantly, by never treating Jackson differently from his own offspring, Big Chris shows the author "the value and impact of a father's love, that family often had nothing to do with genetics."

While never shirking from the various harms his family members inflict on themselves and each other, Jackson consistently writes about them, and truly all the people we encounter, from a place of grace. This may, in part, come from his awareness that the problems ravaging his community are not happenstance. One of the book's many treasures is Jackson's attentiveness to providing historical context for the forces shaping his family members and the place they call home.

These forays into history are as wide-ranging as they are engaging. Among other things, Jackson delves into the origin of the United States White-Slave Traffic Act, the evolution of the Crips and Bloods, and the development of blood banks. His most extensive examination of the past, however, is the prologue, which takes the form of a letter to the first documented black person to set foot in what is now Oregon. Jackson moves from that ill-fated arrival in 1788 through Oregon's ignominious status as the only state to have explicitly excluded black people, before homing in on Portland's history.

Tracing the path of the city's black population, which has rarely numbered much more than 5 percent, he moves beyond his childhood and into the present day. Upon returning to Northeast Portland after years away, Jackson finds that:

"the denizens of the old NEP have been pushed to the city's periphery. ... There was an art deco hospital building under construction and a bakery and a hair studio and a Pilates studio and yet another damn yoga studio. There was a mother pushing a hooded stroller and a couple traipsing the sidewalk hand in hand as if this world would never fail them. But what I didn't see on Williams Ave was a single black face any which way my head turned."

Jackson's searing intelligence is on full display throughout the work, but it is particularly notable when he takes on the problems of gentrification, white supremacy and corporations that gain their wealth off the bodies of the poor. Equally striking is the author's unflinching commitment to turn his critical eye inward. This is especially evident when he reflects on his history of womanizing, pondering whether his behavior can be traced to his troubled youth. He follows that postulation with:

"But I also wonder if mentioning my childhood is an attempt at plea bargaining....For fact there've been plenty men, and I mean multitudes, who had childhoods far, far worse, who had no mother at all or a mother whose love couldn't be felt through her acute abuses, men who've evolved into loving, trusting, faithful, protective, encouraging (fill in the choice trait) caretakers of a single woman's heart."

Just as a letter to a long-dead man may not be a typical way to begin a memoir, so too is the book's structure beautifully out of the ordinary. The essays are arranged in four sections, and each is prefaced with a cento — the poetic form that is drawn solely from the words of other writers. Jackson's are all composed of historical American texts, including the Declaration of Independence, the majority opinion in Plessy v. Ferguson, and the Emancipation Proclamation.

Separate from but intimately linked to the main narrative are "Survival Files," which follow each of the book's sections. These moving, second-person narratives are all told from the perspectives of more than a dozen of Jackson's male relatives, each of whom was asked to respond to the question, "What's the toughest thing you've survived?" From searching for a kidnapped daughter to a repeatedly delayed prison release to facing eviction as a teenager, these pieces are as moving as they are powerful.

Survival Math ends as it begins, with a letter. Addressed to Jackson's teen daughter, the epilogue is part apology, part vow, and entirely shot through with love. It's such a spellbinding narrative that I read the end notes just to extend my time with it. And wouldn't you know it? Even the end notes are beautiful.

Read an excerpt of Survival Math