Accessibility links
Book Review: T Kira Madden's 'Long Live The Tribe Of Fatherless Girls' Not Apologetic In exposing the bad and ugly of girlhood alongside the good, T Kira Madden has succeeded in creating a mirror of larger concerns, even as her own story is achingly specific and personal.

'Long Live The Tribe Of Fatherless Girls' Is Compassionate, Without Being Apologetic

'Long Live The Tribe Of Fatherless Girls' Is Compassionate, Without Being Apologetic 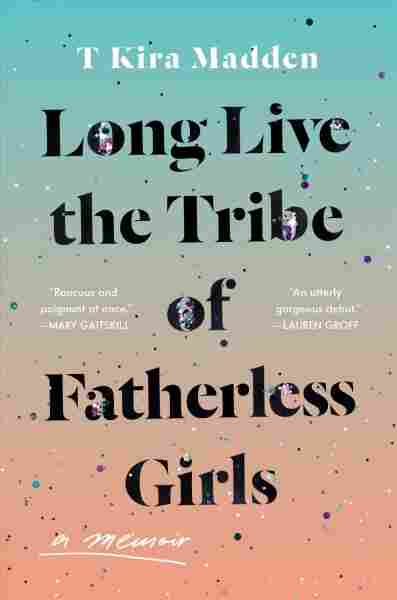 Sometimes memoirs focusing on growing up, addiction, sexuality, and their attendant traumas end up with trajectories that lead to some sort of overcoming: At the end, the author ties them up neatly with the bright pink bow of recovery or healing.

Readers searching for this kind of redemptive story may not like T Kira Madden's memoir, Long Live the Tribe of Fatherless Girls. But the other readers? The ones who value seeing the mess that is childhood, the volatility of desire, the madness of girlhood and what is expected of it? They may well wear out the book's covers with fervid rereading.

Born to a single mother and a father who was married to someone else at the time, Madden's origin story sets the scene for much of the complexities of her Floridian upbringing. Even though her father divorced his first wife and married Madden's mother when the author was still quite young, he was absent from her life — hence the title, which also nods to the death of her father in early 2016. Both of Madden's parents were, in fact, absent in different ways throughout her youth, largely due to addiction, a theme which builds gradually throughout the book. Madden teases out such threads deftly, often without warning, such as in the chapter "Show Name," in which the second paragraph reads:

"My two uncles like to hammer up on our roof while I'm trying to study Latin. They mow the lawn, scrub our water tanks. They pour jugs of chlorine and chemicals into our fountain out front until it looks carbonated. My mother is proud of her little brother and his friend. She knows they're trying to be good, and clean from dope, something she also wants very badly for herself."

There is no other reference in the chapter to her mother's addiction. It comes and goes throughout the book, the background to Madden's life and her parents' relationship. In "The Greeter," Madden explores the topic more fully, with heartbreaking detail and such intense love that it seems to reverberate through the pages. And, indeed, while Madden's father and his death are all over the book, there is a tenderness reserved for her mother that culminates in the final long chapter, titled "Kuleana." The Hawaiian word translates more or less to responsibility, but it is more like a great, sacred duty. And in this final section, Madden tells portions of her mother's story as a child raised in Hawai'i and Florida, and the repercussions that rippled forward in time from events in which control and agency were taken away from her.

In fulfilling her kuleana to tell her mother's story, Madden is also zeroing in even further on a major theme of her memoir: the travesty that is peppered through so many girlhood experiences, the ugliness women and girls are taught so young. As a child, Madden's friendships were often those of convenience, the bonds that arise between the girls deemed as losers by everyone else. She was the equestrian child who had a back brace, a headgear, braces. To make things worse, the rareness of someone with her features — she was born to a Chinese Hawaiian mother and a Jewish white father — at the expensive private schools she attended is clear in how casually even her friends make racist comments and nickname her, among other things, "Kinky Chinky." And while Madden hated being this kind of child, the loser whose own grandmother considered ugly, becoming pretty wasn't much better. In a chapter titled "Can I Pet Your Back?" she writes:

At age 12, Madden is drawn into what she thinks, at first, is a romance with a senior at her school, only to learn too late the ways in which some men use the desires of girlhood in order to harm and do violence. This happens before she becomes pretty, mind you — because such things are never really about beauty, even though, as the passage above conveys, so many of us are taught that it is.

The honesty and vividness with which Madden writes and the tightly controlled structure she utilizes only emphasize the fact that Long Live the Tribe of Fatherless Girls is a deeply compassionate book, though not an apologetic one. In baring the bad and ugly alongside the good, Madden has succeeded in creating a mirror of larger concerns, even as her own story is achingly specific and personal.