Accessibility links
Michael Cohen's Congressional Testimony Leaves Big Unanswered Questions On Trump President Trump's former personal attorney has spent many hours meeting with members of Congress, but big gaps remain in the public understanding of what took place in 2016 and since. 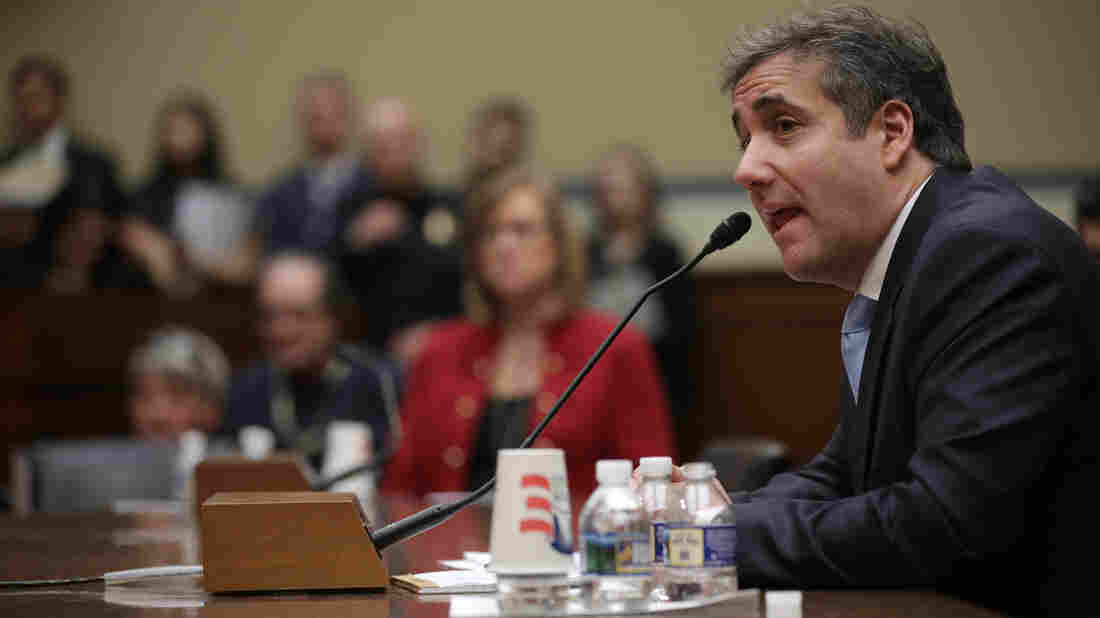 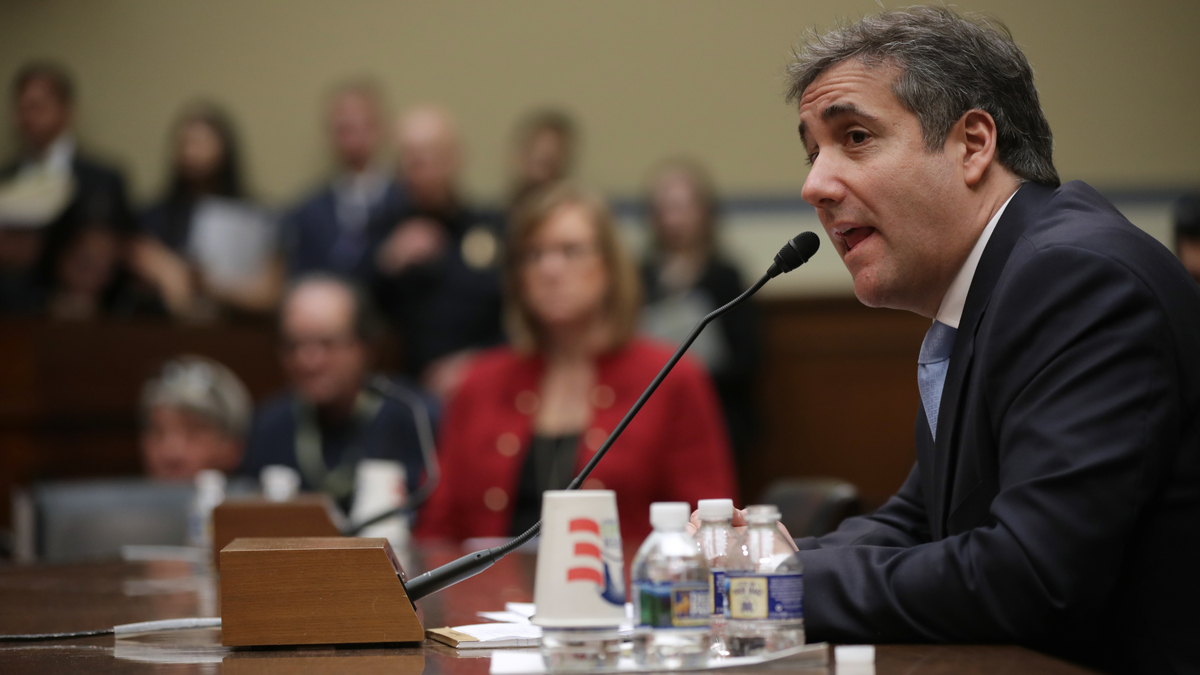 Michael Cohen, former attorney and fixer for President Trump, testifies before the House oversight committee on Capitol Hill on Feb. 27 in Washington, D.C.

Michael Cohen is scheduled to return to Capitol Hill on Wednesday for a fourth session with members of Congress within two weeks — but even that likely won't exhaust the subject of his decade of work for President Trump.

For as much information as Trump's former lawyer has given Congress — and prosecutors — about his previous life, there are as many questions raised by his testimony that don't yet have clear answers.

Democrats have seized on the leads Cohen offered to unleash a swarm of requests for interviews, documents and other materials as part of the investigations they promised to launch into Trump's election, business and more.

The president, meanwhile, says that virtually nothing Cohen has said is true, and that Democrats only want to harass him to hurt his re-election chances.

The greatest overreach in the history of our Country. The Dems are obstructing justice and will not get anything done. A big, fat, fishing expedition desperately in search of a crime, when in fact the real crime is what the Dems are doing, and have done!

As the political skirmishing heats up, here are four big questions that remain unresolved.

Why did the Trumps keep Cohen out of the June 2016 meeting with the Russians?

Cohen told members of Congress he didn't have any "direct evidence" the Trump campaign conspired with the Russians who attacked the 2016 election, but that he had his "suspicions."

Cohen said he didn't know in June of 2016, for example, that Donald Trump Jr. had received, via intermediaries, an offer of help from the Russian government that prompted him to convene a meeting with a Russian delegation in Trump Tower.

A Russian lawyer who has since been charged in an unrelated case gave Trump Jr., then-campaign chairman Paul Manafort and Trump's son-in-law Jared Kushner a political tip about Democratic fundraisers.

People who have talked about the meeting said the tip did not involve easy-to-exploit dirt about Hillary Clinton that Trump Jr. had expected and he said he took no further action after the meeting.

The elder Trump denies he knew then what was happening or about the Russian overtures to his campaign. But Cohen said media coverage in 2017 caused him to remember a conversation "probably in early June of 2016" in which Trump appeared to authorize Trump Jr. to go ahead with the meeting in Trump Tower.

The fact of the meeting has been established and investigated exhaustively. And Cohen isn't the first to say that he believes the elder Trump authorized the meeting — which would suggest he was aware, in real time, of Russia's interference in the election.

But so far there isn't any public evidence to support Cohen's claim beyond the circumstantial observation that nothing in Trump world happened without Trump's say-so. Democrats and Trump's opponents had hoped phone records might help prove the elder Trump knew of the meeting in advance and gave his approval, but they did not.

Cohen might not be telling the truth, and last week Republicans battered him for hours over his confessed false statements, including to Congress.

Even if his account is accurate it still doesn't explain everything. What made Trump decide when to involve Cohen and when to exclude him?

Trump trusted Cohen enough to negotiate with powerful Russians about a potential Trump Tower real estate project in Moscow — a project about which Trump and the White House encouraged Cohen to lie to Congress, Cohen alleges.

Trump also trusted Cohen to handle so much other alleged dirty work — from paying people off to threatening reporters to quibbling with Forbes over Trump's ranking on its list of wealthy people.

So why didn't Trump and his son trust Cohen enough to bring him up to speed about the meeting with the Russians?

Did the Trumps do anything beyond welcome the work of WikiLeaks?

Cohen told Congress he was in the room when GOP political consultant Roger Stone phoned Trump to say he'd just talked with WikiLeaks founder Julian Assange. Assange was about to release a stink bomb that would hurt Hillary Clinton's campaign, he said.

"Mr. Trump responded by stating [words] to the effect [of], 'wouldn't that be great'?" Cohen told the House oversight committee last week.

That corresponds with an account given in the indictment unsealed against Stone in January, which described him talking with Trump campaign officials about WikiLeaks throughout the year.

Stone and Assange both deny they spoke on the phone, as Cohen described. Stone also has pleaded not guilty to the charges that he lied to Congress and obstructed congressional investigators' efforts to find out what happened.

But Justice Department prosecutors do suggest that Stone might have been able to communicate with Assange via a series of intermediaries.

What isn't clear is what else Trump and his camp might have done besides simply welcome the free help they were getting in the campaign.

Did they ask Stone to ask Assange to arrange releases on specific dates? Did they ever ask who was behind the material that Assange was releasing? 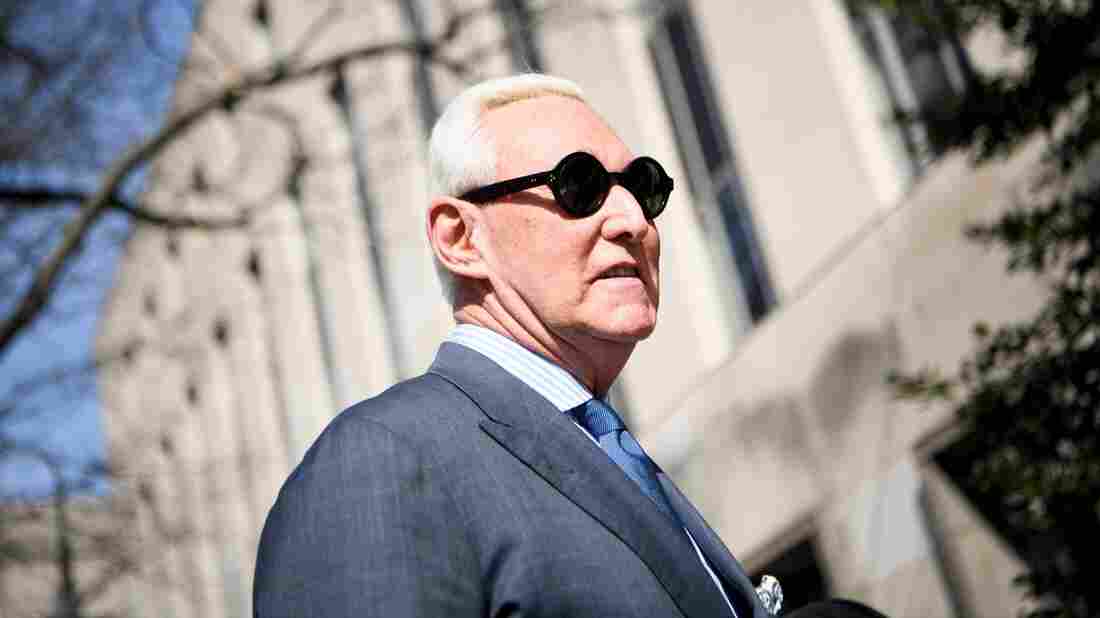 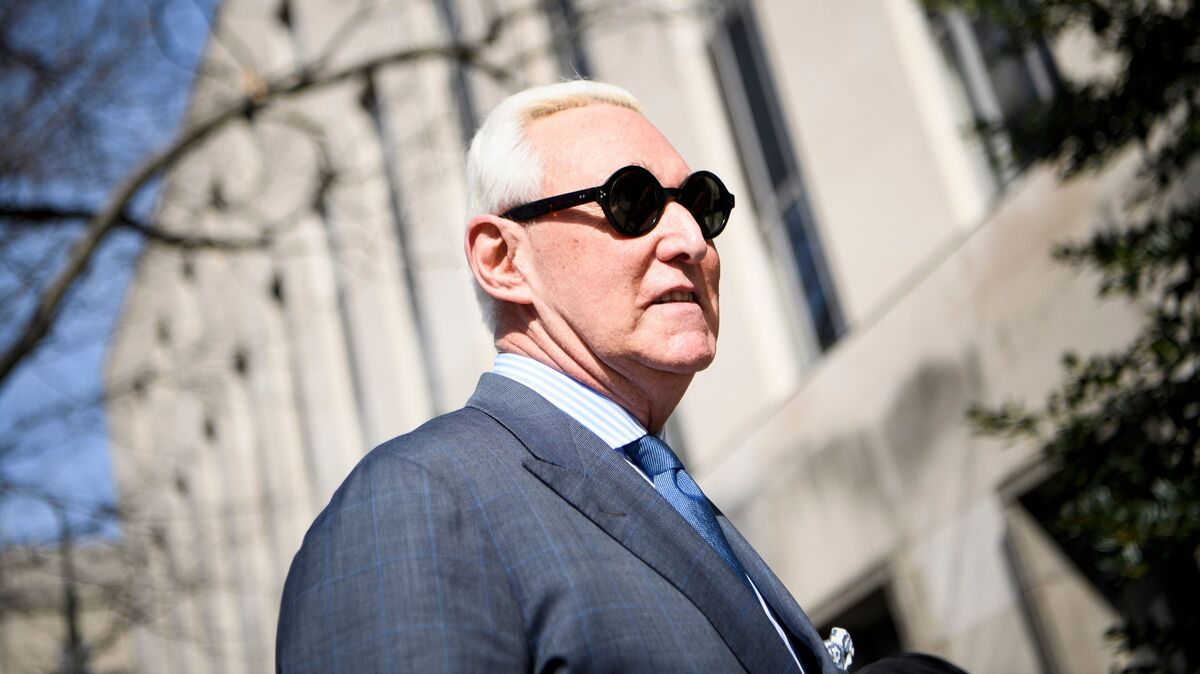 Roger Stone, arrives at the federal courthouse in Washington, D.C., on February 21, 2019.

Investigators have established that the emails and other documents released by WikiLeaks in 2016 were stolen in cyberattacks by Russian intelligence officers, including a dozen who have been charged by Justice Department special counsel Robert Mueller.

What prosecutors have alleged in Stone's indictment is that Trump's campaign welcomed all this, tried to find out more about it and looked forward to the effects on the political environment — but not that they actively conspired with the Russians who were behind it all, or even that they asked Assange to do anything.

On Friday, Oct. 7, 2016, for example, The Washington Post revealed the now-infamous 2005 Access Hollywood tape on which Trump is heard making lewd, politically embarrassing remarks about women. WikiLeaks released a tranche of emails, stolen by Russia's GRU spy agency, on the same day.

Trump's camp, according to the Stone indictment, had been expecting something from WikiLeaks all week.

Trump's campaign welcomed the email releases and praised Stone, according to the court papers, but there is no allegation in the Stone indictment that Trump's aides asked him to ask Assange to unleash the material in order to soften the political impact of the Access Hollywood tape.

Cohen also was asked directly last week about whether Trump coordinated or signaled for the release.

There could be other evidence not yet public that draws a stronger connection between Trump, WikiLeaks and the Russians or suggests an as-yet unknown cause-and-effect chain of events.

But based on what's available today, the campaign appears to have simply embraced what the Russians were doing on Oct. 7, as opposed to having actively colluded with them to bring it about.

Stone says he didn't have any inside line to WikiLeaks. He was just making it appear to Trump's people that he did.

And Trump's attorney Rudy Giuliani has said that Trump didn't get a heads-up about WikiLeaks in 2016, but even if he did — as Cohen and prosecutors both now say — that wouldn't be against the law. Giuliani compared it to getting a call from a newspaper that was about to publish a big story.

The version of events given by Cohen and prosecutors undercuts those denials about the facts. If this is all there is, though, it falls short of an active conspiracy in which the Russians and Trump's campaign were working hand-in-glove to try to win the 2016 election.

The question now is whether this really is the entire story, or whether Congress — or Mueller — has more evidence about active involvement by Trump or the campaign.

What else is in the "treasure trove?"

Although Cohen says he wasn't involved with any Russia collusion, he was the key player on dealing with another big project for Trump ahead of Election Day in 2016 — hush money.

Cohen arranged to pay two women, who said they'd had sexual relationships with Trump, in order to keep them from talking publicly at a critical time in the presidential race.

"I don't think anybody would dispute this belief that after the wildfire that had encompassed the [Access Hollywood] tape that a second follow-up to it would have been pleasant," Cohen said. "And [Trump] was concerned with the effect that it had on the campaign, on how women were seeing him, and ultimately whether or not he would have a shot in the general election."

To get control of the situation, Cohen paid $130,000 to an adult film actress named Stormy Daniels. And he worked with American Media Inc., the publisher of the National Enquirer, to arrange for the company to pay $125,000 to a former Playboy model, Karen McDougal. Trump has acknowledged the payment to Daniels, but the president denies the claims of both women that he had extramarital relationships with them years ago.

Trump reimbursed Cohen for the Daniels payment but never paid AMI, which is run by his friend David Pecker. Cohen said that wasn't the first time Pecker had done such work for Trump but not been repaid.

In fact, there was a whole playbook used by Trump, Cohen and AMI for these situations: "catch and kill."

The publisher would buy material or the legal rights to a person's story, but never use them. People — like McDougal, before she later went public — were in the position of not being able to talk publicly about their own experiences because they'd sold those rights to AMI.

AMI and Pecker amassed what Cohen called a "treasure trove" of documents and other materials about Trump, including rights to stories that weren't even true — but which were at least kept out of circulation.

When Pecker was attempting to take another big publishing job as the boss of Time Magazine, Cohen even looked into trying to buy the trove from AMI, he told members of Congress last week.

The big question that raises is: What else is in AMI's Trump treasure trove?

How credible is Cohen?

Trump's former attorney has caused a lot of political problems for his onetime patron, but Cohen may have brought on a few of his own.

The president's allies have underscored what they've called false statements that Cohen has made to Congress even since his federal guilty plea for lying to Congress.

Ohio Rep. Jim Jordan and North Carolina Rep. Mark Meadows, two influential Republicans who both sit on the House oversight committee, have asked the Justice Department to investigate what they called Cohen's false statements, including about his criminal record and the position they say he sought in the Trump administration.

Cohen acknowledged his past untruths but said he doesn't need to lie anymore because he has broken free of Trump's thrall. The questions raised by Jordan and Meadows, however, suggest that Cohen's situation now might be more complicated — and leave a question mark about everything else he has said.