Accessibility links
Interview: David Means, Short Story Author, On 'Instructions For A Funeral' The author has a new collection of short fiction, his fifth. In an interview, he says that his father's death got him thinking about parenthood — and what he might want at his own memorial. 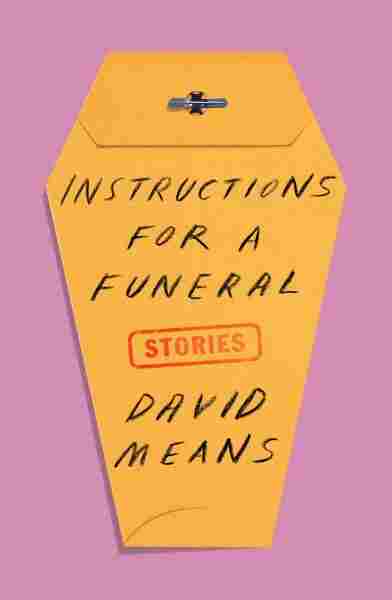 Instructions for a Funeral

David Means is an enthusiast, and a defender, of the short story. As he once said, "We don't tell novels at the kitchen table."

"Of course, that's sort of a sales pitch for the short story form," Means says in an interview. "But I really believe that they're really usually, at the core, relatively simple. You know: This happened, and then this happened."

He says you "can't just stretch" a short story to make a novel. His new collection, his fifth, is called Instructions for a Funeral.

It includes a wide range of characters, times and locations — from a 1930s FBI sting to an exploration of how Raymond Carver and Kurt Cobain may intersect. Quite a few deal with the tensions and joys of family (he's the father of twins, now adults).

Right from the start, the collection raises questions. Is the first story, "Confessions," meant as an author's note to introduce the book — or is it the voice of another character altogether?

"Both, I think?" he says. "I don't really believe it's me, but I did realize that it sounds like it could be me, so I'm being cagey. I'm going to hedge my bets and say it's not me, but it's sort of me."

The energy for telling a story: It comes from things that bother us, or the things that are causing pain. And we tell each other stories, and we tell ourselves stories, and they come out of moments of, usually, anguish and problems.

On "the best part, knowing that you'll be betrayed by the reader"

Yeah, because you write a story, and then you know that it's actually taking place in the reader's mind. The reader does most of the work. The reader does all of the imagining. You're just giving them a set of instructions on how to hear and see something. And I love that. I love the fact that I'm going to write a story, and it's going to go out there, and I'm not really in control. I think it feels good. ... [It is a] betrayal because the thing that I wrote, I thought I had a complete understanding of it. The betrayal comes from the sense that the reader is going to take something else from it.

On "The Chair," a story about parenthood

I was at home for a number of years as an at-home father. I think the whole process of being at home with the kids — and all that hairbrushing and all of the little needs — I had to wait a few years before I could process it all, and have enough distance to see what was really going on at the time, or at least to imagine what was going on at the time. ... How much discipline do I give? How much freedom do I give? What happens if I don't give them enough freedom to learn what they need to learn in how to navigate the world? You know, all of those complex things that are going on in a parent's mind — the minute-by-minute, you know, on-the-ground parenting thing. ...

Well, my father died about three years ago, and then my mother died in October. ... When my father died, I felt this grief, but also this release, as a storyteller, to maybe go into material that covered the parenting ground. So I think part of the fact that I'm going back to the parenting — you know, to being a younger parent — is that my father died. Everything shifts and you reassess everything from a totally new perspective, and you realize that your parents, for all of their faults, did this incredible job in just getting you through to where you are now.

On the title Instructions for a Funeral, and the story with the same name

Means: Well, that actually came because I was walking around, always sort of thinking ... after my dad's funeral, I was thinking, you know: What do I want at my funeral? The story has nothing to do with that really, but I took that energy, that narrative energy, and I used it to write a story.

Cornish: And actually kind of a funny story, listening to the character with his bulleted list of what he wants.

Means: He's in a protective mode, and he's defending himself, and he's trying to control the narrative that might come if he ever gets killed, and there's a sort of feeling that he might, because he's been involved with the mafia. So it's a funny dynamic.

Cornish: I think we all do that, right? You don't have to be a character in a book who's dealing with the mafia to feel like you're trying to be in control of your narrative.

Means: At some level, we should be at least aware that we are going to die. And I think we stop every now and then — at least some of us do — and reassess, and say, "OK, what have I done with my life?" And: "What kind of narrative is going to be told when I'm gone?"

Cornish: How are you feeling so far about yours?

Means: I have mixed reviews, I think.

Means: Three stars, I think so far? I'm shooting for five stars, but no one can do that.

Art Silverman and Justine Kenin produced and edited this interview for broadcast. Patrick Jarenwattananon adapted it for the Web.