Accessibility links
Cory Booker Lays Out His 'Opening Argument' For The Presidency In a wide-ranging interview with NPR, the Democratic presidential candidate explains why he thinks consensus around generally progressive ideas and "courageous empathy" are viable goals in 2020. 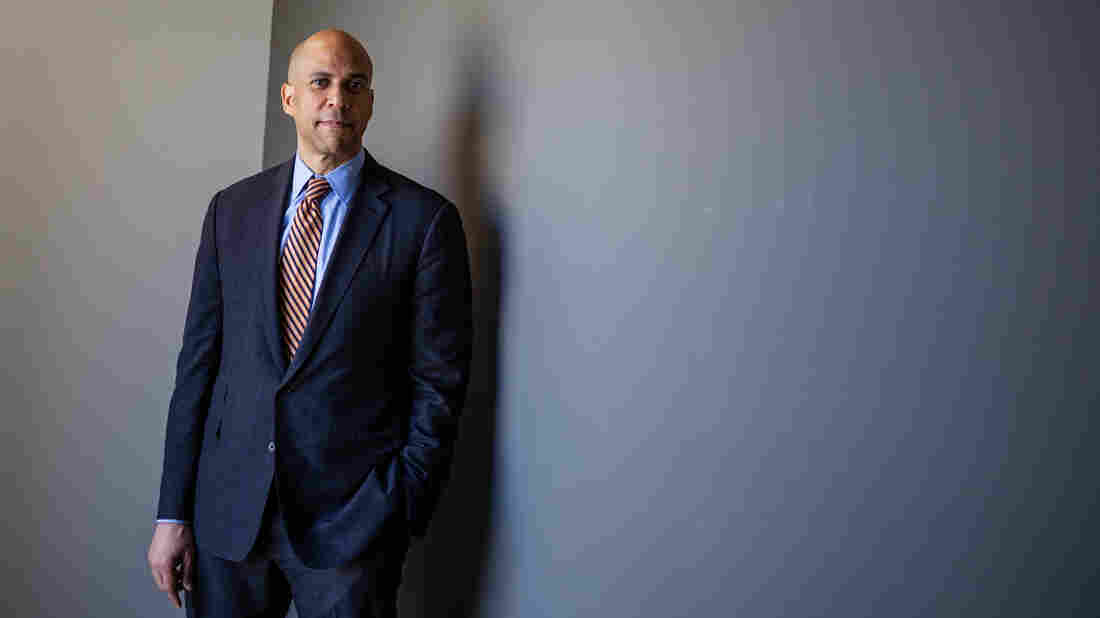 Cory Booker poses for a portrait at NPR headquarters in Washington, D.C. Underlying many of Booker's points is a belief that it's possible to create bipartisan consensus, even while the partisan divide in America seems to grow ever wider. Amr Alfiky/NPR hide caption 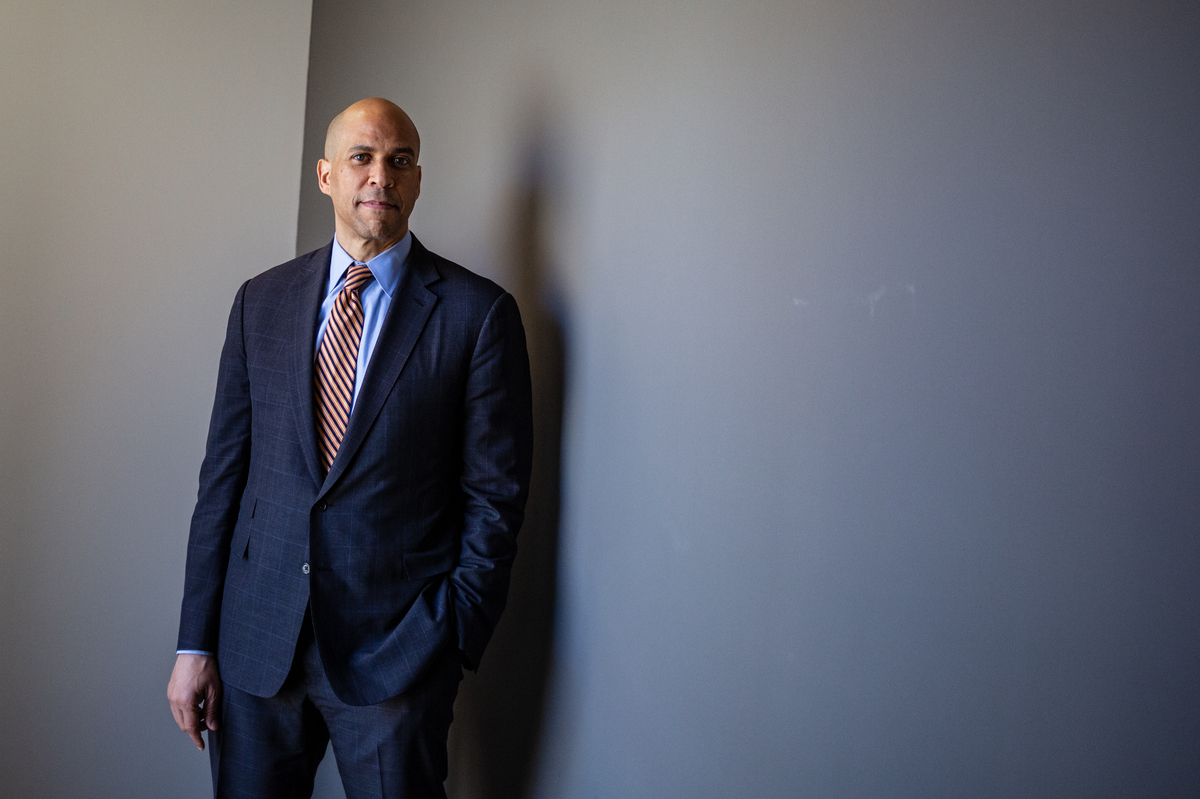 Cory Booker poses for a portrait at NPR headquarters in Washington, D.C. Underlying many of Booker's points is a belief that it's possible to create bipartisan consensus, even while the partisan divide in America seems to grow ever wider.

Speaking to NPR about his run for the presidency, the New Jersey Democrat used phrases like "coalitions of conscience," "sacred honor" and "courageous empathy."

But those hopeful ideas pose a major challenge for Booker: how to translate his aggressively optimistic view of American democracy into any sort of policy action, especially with such gaping differences between the two parties on a wide range of policy areas.

He's the first of the 2020 presidential candidates whom NPR's Morning Edition spoke to in a series of conversations to explore their core campaign messages called Opening Arguments.

Host Steve Inskeep interviewed Booker about not only what he wants to accomplish as president, but also why he thinks large (and often progressive) policy leaps are possible.

"The founders were imperfect geniuses. They wrote a lot of our bigotries into [the Constitution]. ... If you think about how we have overcome those things, it's always been by creating, first, calls to consciousness, speaking truth about the injustices, and then bringing together those uncommon coalitions."

"We are a nation of conscience, and I found partners on the other side of the aisle who agree with me on these issues. And we can build from there. In fact, when I first came to the Senate, people laughed. I had people telling me, 'There's no way you're going to get a comprehensive criminal justice reform bill done.' "

Underlying many of Booker's points is a firm belief that it's possible to create bipartisan consensus, even while the partisan divide in America seems to grow ever wider.

Booker argues that he's the man to create that consensus because of his record as mayor of Newark, where he at times worked with Republican Gov. Chris Christie; his work passing the bipartisan FIRST STEP Act on criminal justice; and legislation he worked on with Sen. Tim Scott, R-S.C., to create "opportunity zones." The basic idea is that investors would get a tax break for putting their recent investment gains into projects in low-income areas.

Booker acknowledges that building bridges between Republicans and Democrats will be difficult. He told NPR the story of a Midwestern farm family that at first refused to meet with him.

"They call the person that was showing me around and said, 'Hey we're a Christian family. We can't have Cory Booker in our home.' Because we have these outrage machines that are making the highest corporate profits they've ever made, because of their telling us to hate each other so much," Booker said.

In the end, however, Booker said he won the family over via "dad jokes" and finding some common areas of agreement on farm policy.

"This is a system that just grinds people into it who are the most vulnerable. You know, you can judge a lot by a country by who they incarcerate.

Criminal justice reform is one of Booker's key policy areas in his presidential policy platform — he often cites the statistics that the U.S. has 5 percent of the world's population but 25 percent of its incarcerated population. He was a key force behind the FIRST STEP Act, which President Trump signed into law. Among other things, that law ends the "three-strike penalty" that gave some offenders automatic life sentences, it helps judges avoid imposing mandatory minimum sentences, and it gives prisoners more access to rehabilitation programs.

Booker will soon introduce what he calls the Next Step Act, a package of further criminal justice changes. It includes provisions that would legalize marijuana at the federal level, eliminate the sentencing disparity between crack and powder cocaine, and give felons the right to vote.

This is one big area where Booker would likely have an uphill battle with Republicans. A recent Florida measure to give felons the right to vote faced stiff GOP opposition, though it passed and went into effect in January. 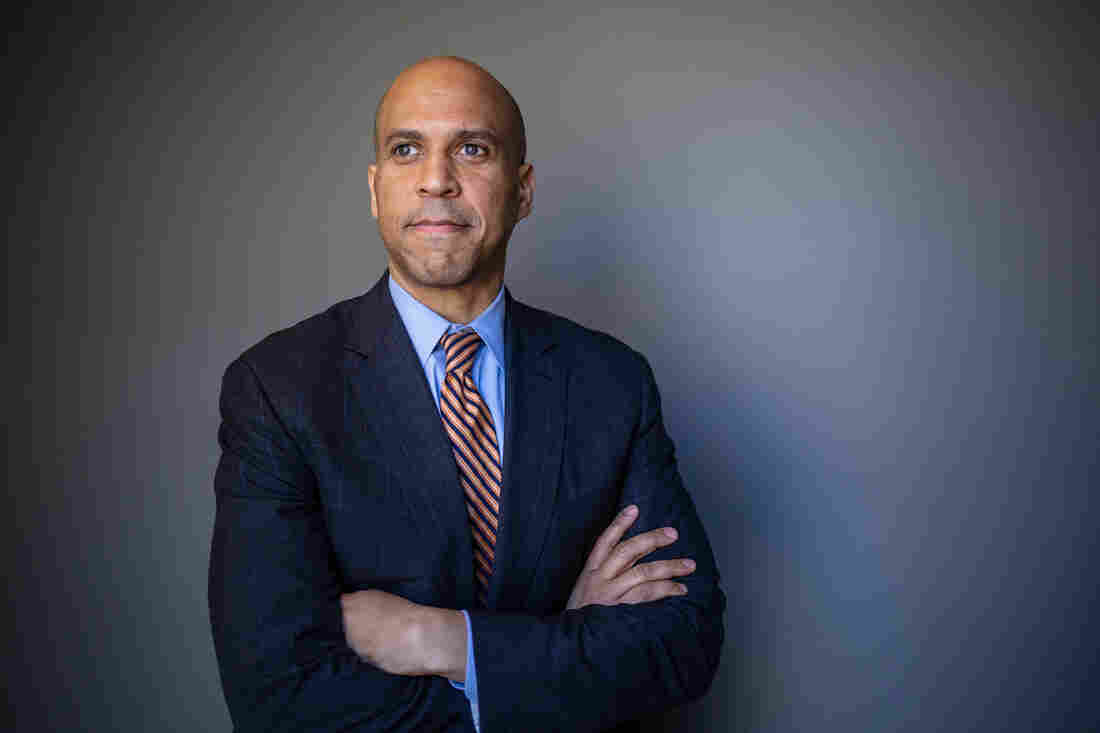 "You can judge a lot by a country by who they incarcerate," Cory Booker tells NPR. Amr Alfiky/NPR hide caption 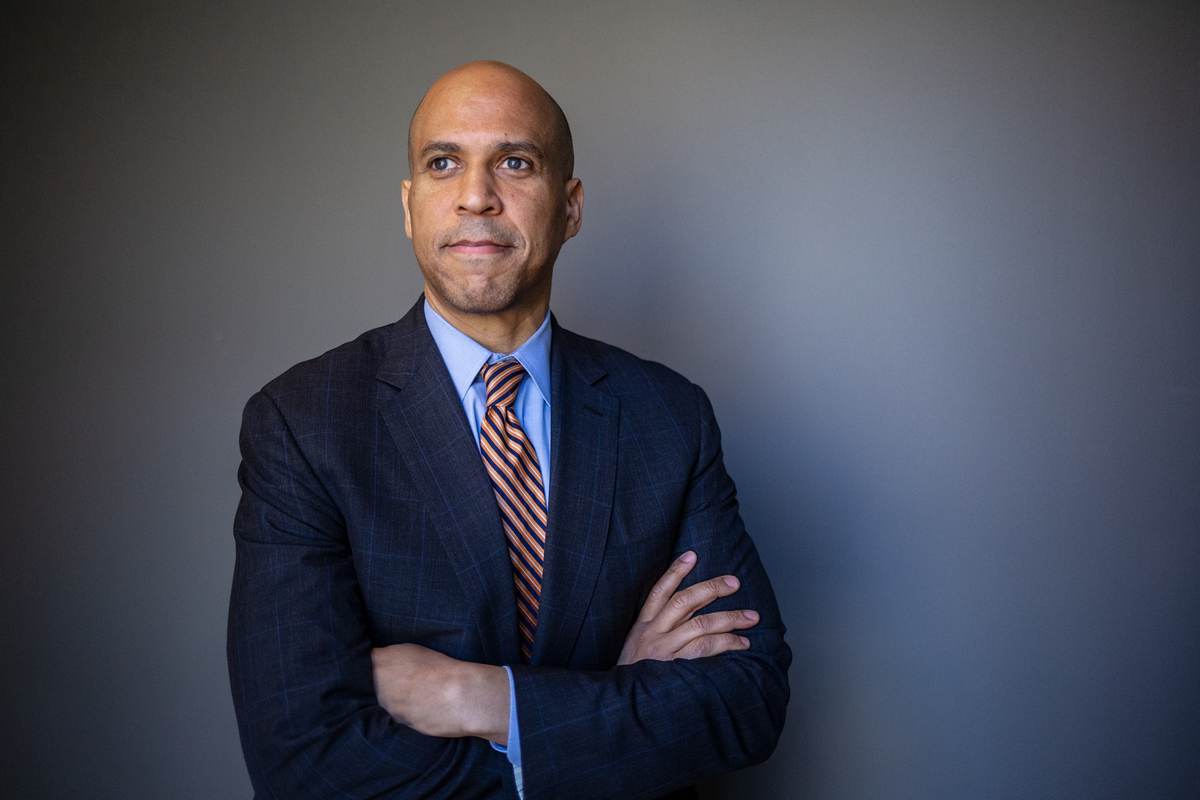 "You can judge a lot by a country by who they incarcerate," Cory Booker tells NPR.

"We were one vote shy from bringing down Medicare eligibility to 55. One vote shy. I'm going to fight for that one vote when I'm running in 2020, because what would that have done?"

Booker is one among several 2020 presidential candidates backing Bernie Sanders' Medicare-for-all bill. However, he stressed in this interview that he has also backed other, less-sweeping health care proposals, like reducing the Medicare eligibility age to 55, from the current age of 65.

He also said that despite pressure from some on the left, he would not eliminate the Senate filibuster to pass a health care overhaul like Medicare-for-all.

His reasoning is that without the filibuster, "the kind of things they could have done in the first two years of the Trump administration would have been so damaging to people."

"And we need to understand that there's good reason to have a Senate where we're forced to find pragmatic bipartisan solutions," he added.

"Why do we need to universally condemn entire sectors of our society, as opposed to talking about what's happening within them that is in violation of values and creating regulations and rules that make sure that they are affirming what's in the best interest of our country?"

Booker has close ties to the technology industry, even while he has co-sponsored greater regulation on tech companies. A recent piece from Recode's Theodore Schleifer detailed the tension at the heart of this relationship. As tech companies are at the center of discussions about privacy, political misinformation and hate speech, Booker's past friendliness with the industry — and potential for taking donations from the Silicon Valley elite — could turn off some progressive voters.

Booker is staking out positions critical of tech companies, saying that he supports more regulation on privacy and security issues. He said too few companies control too much of the industry to expect them to self-regulate, and he criticized practices like contracting low-wage jobs, instead of providing corporate benefits to those workers.

Kevin Tidmarsh and Steve Mullis produced and edited this interview for broadcast.