Accessibility links
Slingshot Scenes: 10 Artists You Should Know From Philadelphia From the propulsive punk of Low Dose to the uplifting dreamscapes of Orion Sun and the heady rock of Ali Awan, these are the Philly musicians you need to hear right now. 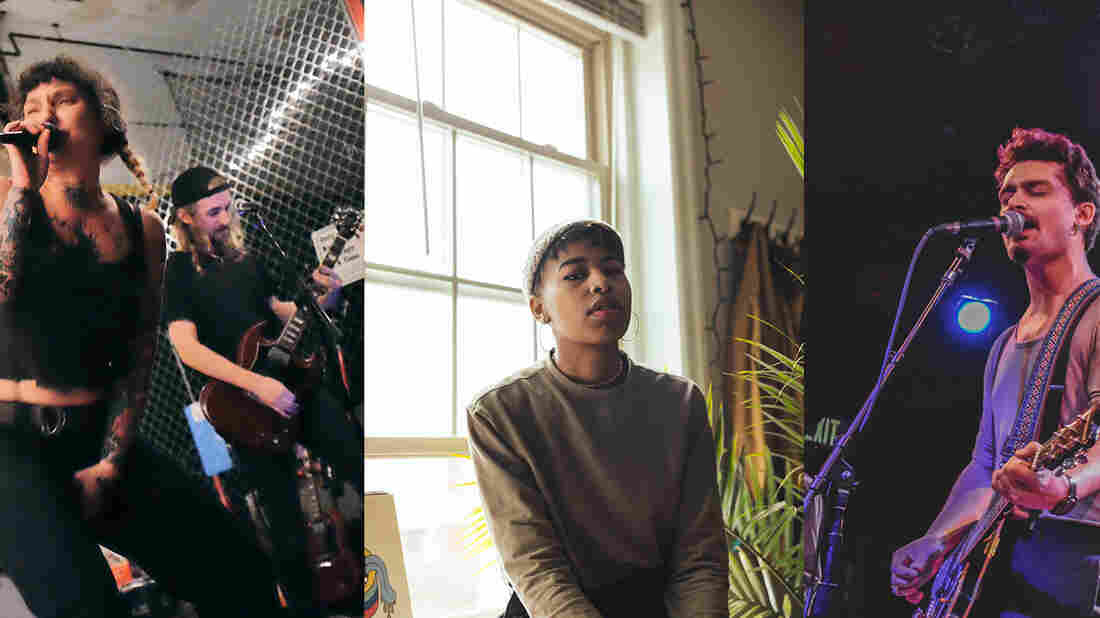 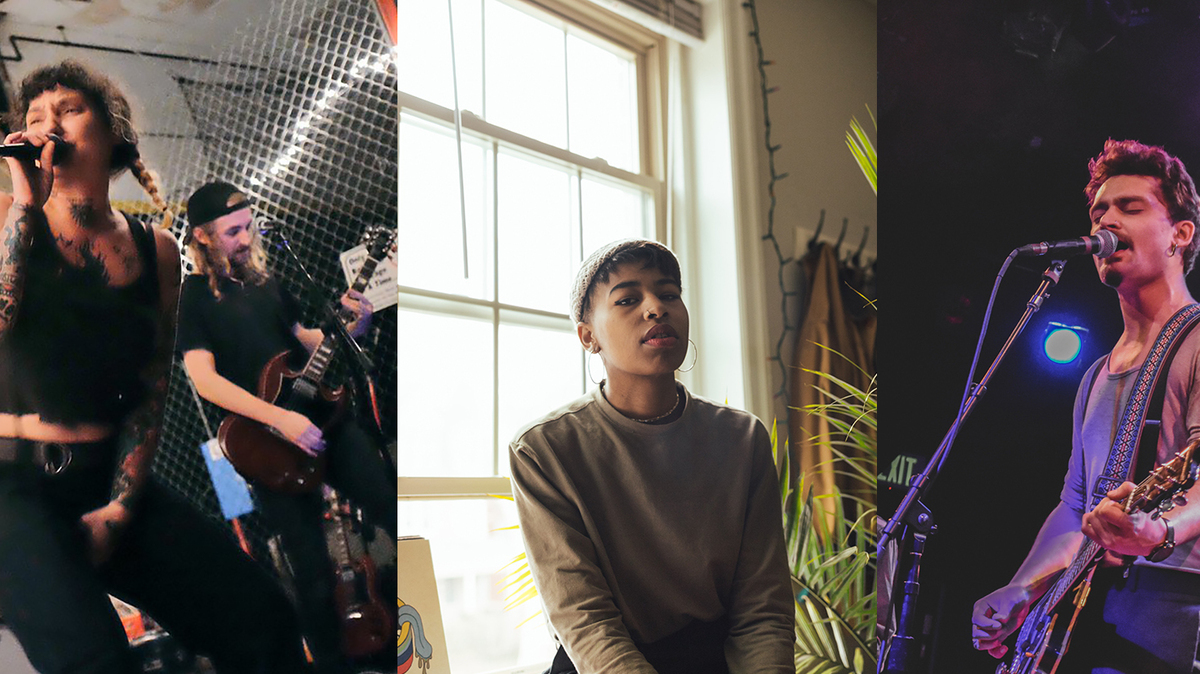 Philadelphia is a city of neighborhoods. And in the same way that the high-density grittiness of South Philly's Pennsport is distinct from the multicultural bohemia of West Philly's Cedar Park, the music from different creative spheres across the sprawling metropolis boasts a variety of unique identities. From punk to psychedelic rock to hip-hop, Philly is neither a sonic monolith, nor is it an all-encompassing melting-pot. Rather, it's a spacious scene that allows each group to stand alone and blossom on its own. Here are 10 artists to discover from the Philadelphia musical community.

It's Orion Sun's dream-world; we're just lucky to be part of it. The Philadelphia songwriter, producer, and multi-instrumentalist – one of WXPN's 2019 Artists To Watch – has a sound that distantly beckons you from down the hall and up the stairs. Arpeggiated minor 7th guitar chords ring out in the late-night hours after a crowded city has slipped to bed. A yearning voice cries out in search of connection, motivated by kick-snare beats chopped into a swift and swinging cadence. With elements of electronic music, hip-hop, jazz and pop at play in her compositions, Orion Sun comes close to rendering the idea of genre irrelevant: these are simply beautiful songs that carry listeners with them wherever they go.

A healthy lineage of barnstorming psych rock artists has emerged from Philadelphia over the years: 1960s originators like The Nazz, and more contemporary, retro-flavored artists like Lilys and Dr. Dog. In certain circles, this is dubbed the "Psychedelphia" scene, and the latest to carry its torch is a 26-year-old songwriter named Ali Awan. He's played in one basement band or another since he was a teenager, and over the past year he decided to focus his energy not on backing up his friends with scorching lead guitar licks – which he excels at – but allowing his own voice to take center stage. Awan's Butterfly EP, released last month, stacks layers of guitars and keyboards into robust arrangements that reward repeat listens. There's always some new element to discover, whether it's a scintillating melody you never caught before, or the gravity of the songwriter's own lyrical musings about getting lost in the shadows of your mind.

The open-mic circuit surrounding the Philadelphia folk community is an ever-changing thing; for every aspiring artist that turns up regularly at their neighborhood's weekly showcase, there are three more that make the rounds around the region, give it a go, and move on. The minimalist jazz-tinged duo Bethlehem and Sad Patrick is an example of permanence that sprung from this fluid environment; guitarist Patrick Arkins connected with the captivating vocalist Bethlehem Roberson at his local open mic, and they began working together to fuse her poetry with his Wes Montgomery-flavored phrasings. Their new album, Love and Other Struggles, encompasses a range of themes from romance to racism to rhapsodies about life in Philadelphia, all told through moving melodies.

Remember when the idea of a bedroom producer used to be a novelty? Now it's 2019, and a 96-channel mixing console in a multi-million dollar sound-treated space feels like an artifact of rock-era excess. Sure, one could make an epic-sounding record in a room like that – if they can actually afford to work there. But they'll never make as good of a record as somebody with open ears, excellent taste, excitement about their creative ideas, and the right software on their laptop. This is how Philly electropop two-piece Camp Candle approaches things; producer Nu-Ra and vocalist and lyricist Hetepsa are lifelong friends who work together in their Northwest Philadelphia homes to cook up heady jams that dance between the body-moving modern rock of Phantogram and the gauzey dreamscapes of Washed Out. It's life-affirming music, but is reflective of the uneasiness of life as well. On "Save Me," in particular, Hetepsa addresses depression, self-doubt, and other struggles with mental health.

Singer-songwriter Sophie Coran fancies her aesthetic "Noir & B," which is a clever way of packaging an artist who boasts both a faux-fur coat vintage Hollywood look, and a smoky-voiced after-hours lounge sound. Below the surface, though, Coran's songs are complex studies of human connection — between lovers, between parents and their children, between strangers. And they're surprisingly contemporary, too, influenced by '70s soul throwbacks like Roberta Flack as much as present-day soul artists like Nick Hakim. Her recent single "Duller Star" was recorded with Coran's current backing band, experimental Philly duo Trap Rabbit, and it builds into a breathless beat drop that – in its own, downtempo jazz-pop kind of way – will get you moving.

In hyper-innovative corners of West Philadelphia, groups of the city's electronic tinkerers and sampler-fiddlers converge periodically at backyardbxss, an event that is one part dance party, one part BBQ, one part workshop for like-minded creators to swap tips, share ideas, and nerd out over their process. Beatmaker and soundscaper Kilamanzego co-founded the series, and its hive-mind influence on tracks like recent single "The Edge of Twilight" is undeniable. A former punk bassist with a deep interest in hip-hop and electronic music, Kilamanzego takes trap beat templates and blows them up with samples of nature and instrumental snippets plucked from Ghanaian music, a homage to Kilamanzego's own heritage.

Philly punk four-piece Low Dose is the chilling sound of post-traumatic catharsis. The raucous band sprung up as a casual practice space collaboration between peers in the scene – three members of the gravelly, grungy Fight Amp, paired with commanding vocalist Itarya Rosenberg of Legendary Divorce. But as the project evolved, Rosenberg was going through her own actual divorce, and began pouring its earth-shattering effects into Low Dose's songs. The self-titled album the band is about to release might come from a deeply personal place, but it puts Rosenberg's experience on a broader scale, reflecting on the cycle of abuse, on manipulative behavior, on vindictive misogyny, and the ways that a gutting personal low can help one find inner strength.

This winter in Rivera Maya, Mexico, the audience at Brandi Carlile's Girls Just Wanna weekend got to see a singer-songwriter named Andrea Nardello play "Mainstream Kid" with Carlile and her band. For many, it was an introduction to this spirited young woman with the unexpectedly powerful voice, but here in Philly, we've known that Nardello was an artist to watch for nearly a decade. In the spirit of singer-songwriters from k.d. lang to Sara Watkins, Nardello takes a primarily acoustic approach to songwriting, and then builds on it with strings and synths to make statements that are both intimate and expansive. The songs on her 2018 EP Human study the complex emotions surrounding life and death, and the common ground that brings us together. --Helen Leicht

Good time rock and rollers RFA can light up a room like nobody's business. These four early-twentysomethings have been playing music together since they were high school kids, and they've expanded their palette over time from the rollicking Beatles nuggets of their early recordings to the cool and confident swagger they boast today. RFA's self-titled 2018 album is one potential classic rocker after another, but they're also a self-aware band, too: "Teenage Love Song" finds frontman Dan Cousart admitting that, yes, he's yet another songwriter exploring well-trodden roads. That doesn't make RFA any less genuine about it.

Lots of bands play it safe and aim to make an audience feel comfortable. Philly's Sixteen Jackies intend to do the opposite. From writing songs inspired by classic horror films to performances that incorporate spitting blood and wearing hockey masks, this is a band that's going to grab your attention — and it won't let go. And while there's a theatrical nature to its live shows, the band does so without compromising musicality. With two EPs under its belt, Sixteen Jackies finds itself balancing inspiration between '70s glam rock (Bowie, T. Rex) and '90s alternative (Sonic Youth, My Blood Valentine). They may make you squirm, they can definitely make you dance, but one thing is assured; Sixteen Jackies will leave you entertained. --Mike Vasilikos

For more of this month's Slingshot Scenes, check out the 10 Must-Watch Music Videos From Philadelphia.

All songs are currently available to stream on NPR Music's Slingshot playlist on Spotify and Apple Music.