Accessibility links
As 'Gloria Bell,' Julianne Moore Embraces The Drama Of Everyday Life "The older I get, and the more experience I gather — as an actor and as a human being — the more I'm interested in things that are real," Moore says. She stars in the new film Gloria Bell. 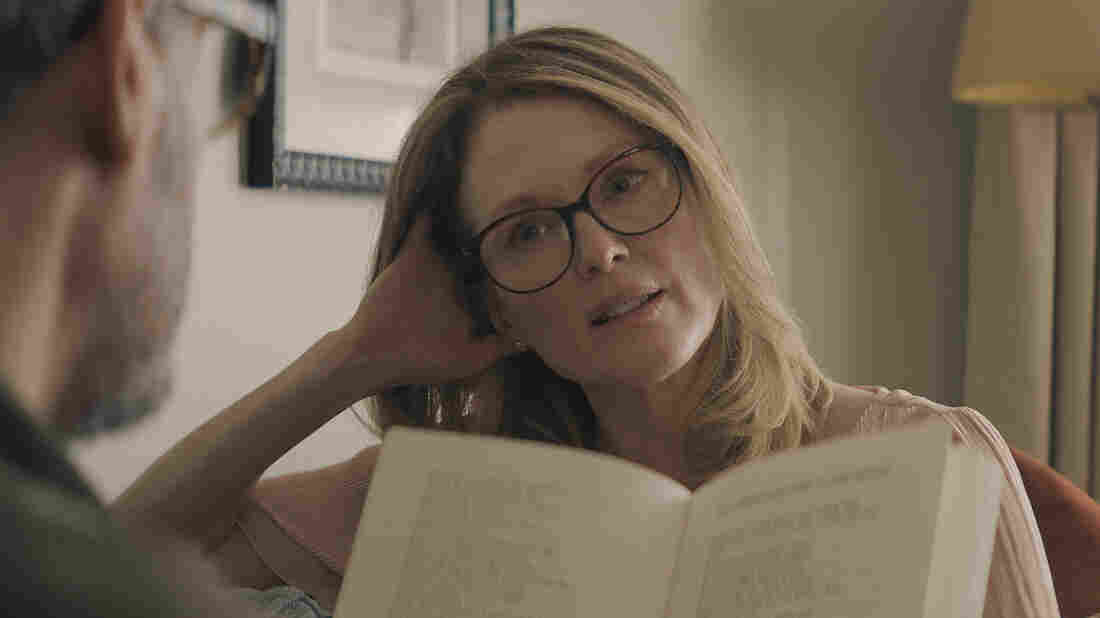 "Every life is interesting and valuable ... we are all at the center of our own narratives," says Julianne Moore. She stars as Gloria Bell in a remake of the 2013 Chilean film Gloria. Sebastián Lelio directed both films. A24 hide caption

"Every life is interesting and valuable ... we are all at the center of our own narratives," says Julianne Moore. She stars as Gloria Bell in a remake of the 2013 Chilean film Gloria. Sebastián Lelio directed both films.

Julianne Moore isn't itching to play flashy, dramatic roles. "I find that the older I get, and the more experience I gather — as an actor and as a human being — the more I'm interested in things that are real ..." she says. "It's almost like behavior is way more interesting than acting."

Moore says her latest film, Gloria Bell, feels almost like a documentary. Gloria is a mother, a daughter, and a grandmother. She's divorced, lives in LA and works in insurance. She's an enthusiastic singer, an occasional smoker and an exuberant dancer — it's an average life, but not a boring one.

We're not used to seeing ordinary lives on screen, Moore says, and that's too bad, because our day-to-day can be full of drama. "The tension is all very ... human, it's ordinary," Moore says. "It's like: Is she going to call this guy? Is she going to have another drink? ... It's not the drama that we often see [in films] which is like: Is that meteor going to hit your town? So often films are about these big, dramatic events, but really the drama of our everyday lives — that's what shapes us, and that's what we're most compelled by."

Gloria appears in every single scene in the movie, which is a remake of Sebastián Lelio's 2013 Chilean film Gloria. "I literally was never off the set," Moore says. It was a new experience for her, feeling her character "penetrating every frame of the film."

Off screen, Moore felt her character seeping into her own life as well. "I think she's a real role model in terms of how to engage in your life and with other human beings," Moore says.

When you watch Gloria, it's as if you're experiencing your own life because — with all of us — the only person who really knows the whole of us is ourselves.

On the way the audience gets to know Gloria

Gloria has these relationships with all these different people ... with her coworkers, and her best friend, and her mom, and her children, and her boyfriend. And yet, the only people who see her in her entirety is the audience. So when you watch Gloria, it's as if you're experiencing your own life because — with all of us — the only person who really knows the whole of us is ourselves. So it's a very unusual experience to see a character this way — so, so intimately, so holistically.

No, I don't. ... What I really love about Gloria is how engaged she is in her own life and in her own relationships. ... When she goes to these clubs to dance, she means it — she's going there because she likes to dance. ... I don't think she actually is looking for a relationship — she ends up finding one, and in finding it realizes that ... she wants someone to share her life with. But that's not something that she's anticipating. 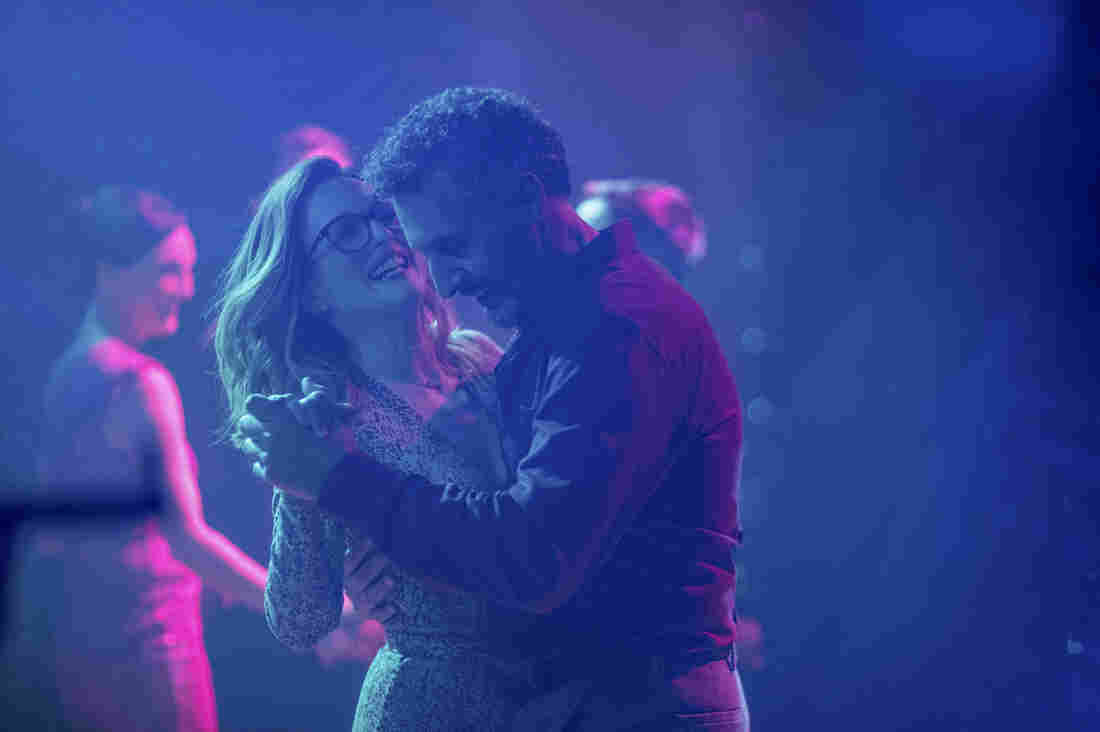 Moore is a "huge admirer" of John Turturro — "It was such a joy to be with him," she says. Turturro plays Arnold, who meets Gloria one night at a bar. Hilary Bronwyn Gayle/A24 hide caption 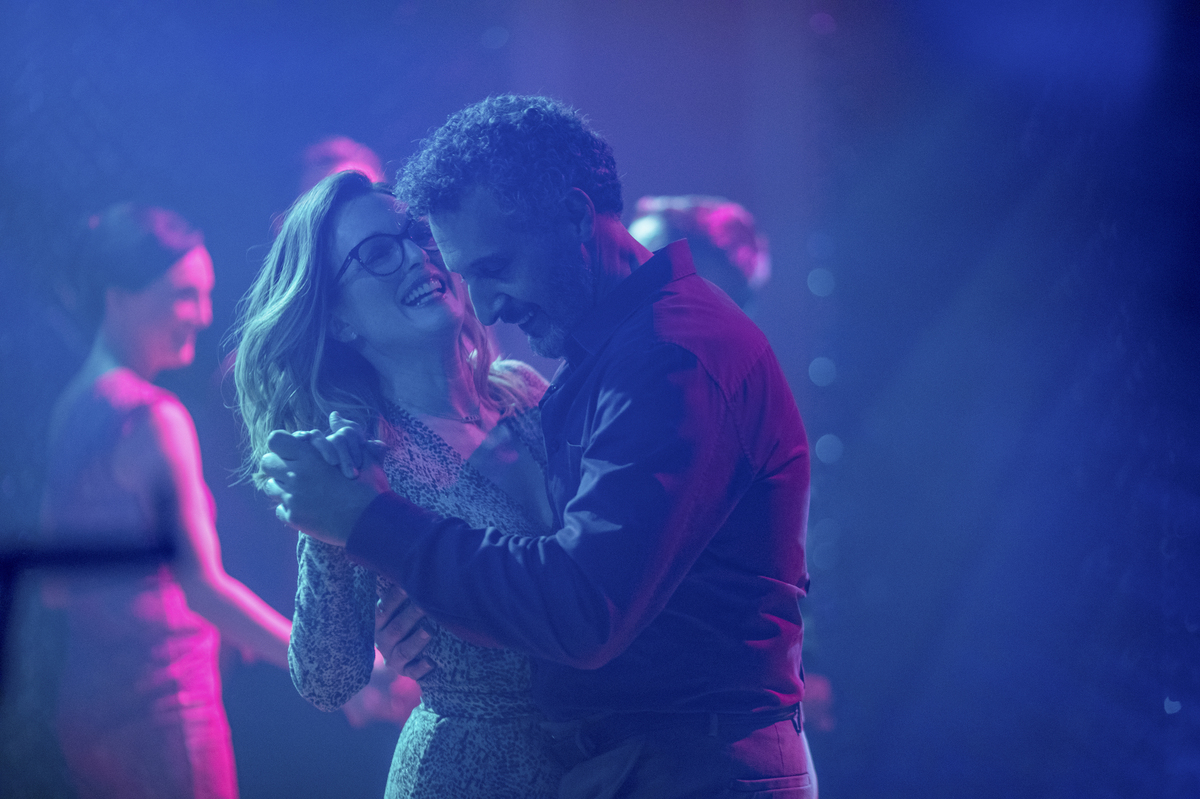 Moore is a "huge admirer" of John Turturro — "It was such a joy to be with him," she says. Turturro plays Arnold, who meets Gloria one night at a bar.

On working with John Turturro

John brings always so much soulfulness to everything that he does. I think the way he was able to project Arnold's love for Gloria and his desire to be with her — and also his inability to actually be with her fully — I thought it was really lovely and actually kind of tragic. ... He's very alive. He's very connected. He's joyful and soulful and everything you'd want in a partner.

On the intimate — if awkward — sex scenes in the film

If a scene like this is in a movie, you're trying to communicate something to the audience about how tenuous and wonderful an intimate connection can be — particularly when people are getting to know each other: What it really means to be with another human being, how far out on a limb someone is going. ... [The goal is] to communicate something about the characters and their relationship, so that's one of things that John and I were very careful to do. And it's also super funny.

There are too few of them. ... We don't value [relationship stories] enough for the business, and yet, we value it in life, right? We value relationships. ...

I don't think that there needs to be some kind of predictable arc to a romantic comedy. I don't think it has to begin with not knowing someone and end with getting married or dating or whatever. I think that a long, romantic complicated relationship is — once again — it's the stuff of our lives. ... Most of us end up in couples at one point or another in our life, so these are things that we're endlessly fascinated by.

On feeling connected to the character of Gloria

I've always found that I'm very good at kind of separating my work from my life. But there are characters that I care about more than others. There are some characters I'm really happy to say goodbye to. ... [But] Gloria I have so much affection for, and I think that she's a role model. ...

There's a difference between toughness and resiliency. ... People think that to be brave that you have to be tough. ... Tough means that you can kind of shield yourself from things that are happening. Resiliency is about allowing things to penetrate your being, to experience them, to be hurt by them, to react to them — but then moving on anyway and moving on with real positivity. ... That's what I want to keep with me. I always think: Well, what would Gloria do?

Dave Blanchard and Sarah Handel produced and edited this interview for broadcast. Beth Novey adapted it for the Web.