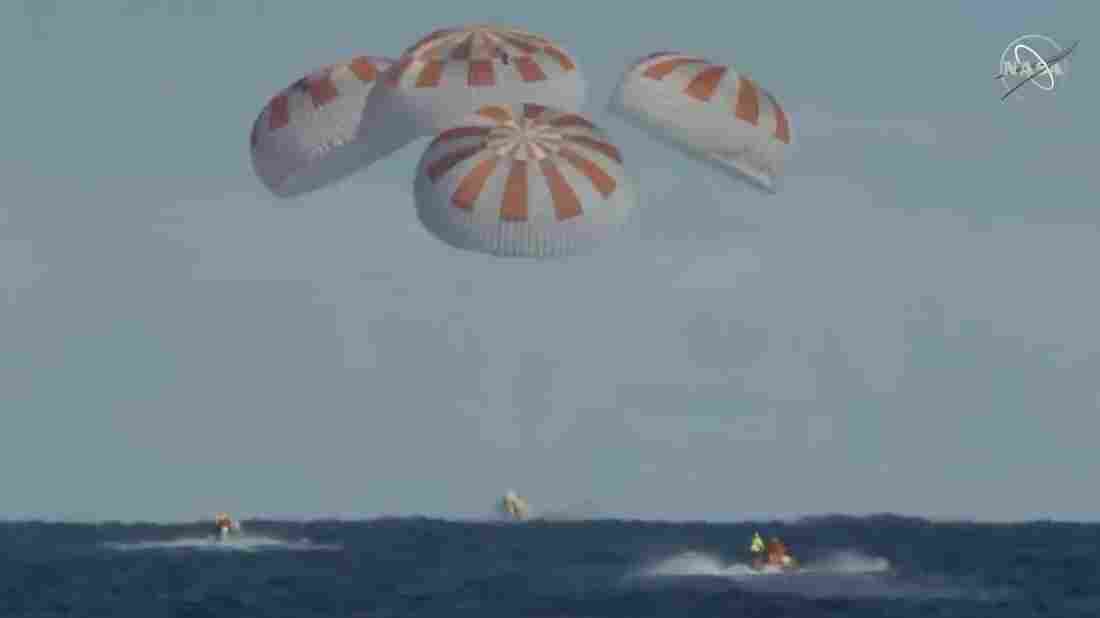 The Crew Dragon landed safely in the Atlantic Ocean on Friday morning, with a splashdown at 8:45 a.m. ET, as scheduled. The uncrewed craft had been on a test flight in which it docked with the International Space Station. NASA TV Screenshot by NPR hide caption 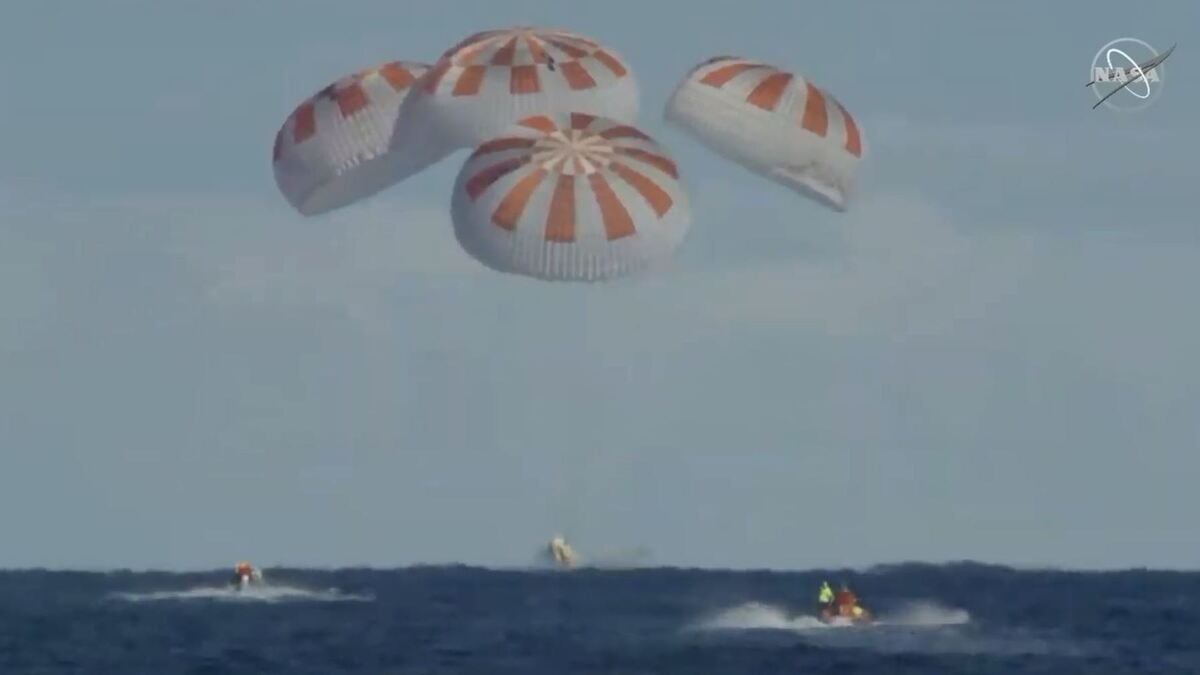 The Crew Dragon landed safely in the Atlantic Ocean on Friday morning, with a splashdown at 8:45 a.m. ET, as scheduled. The uncrewed craft had been on a test flight in which it docked with the International Space Station.

The SpaceX Crew Dragon hit its splashdown time of 8:45 a.m. ET right on target Friday, landing in the Atlantic Ocean after undocking from the International Space Station and re-entering Earth's atmosphere.

The successful test and splashdown is "an amazing achievement in American history," said NASA Administrator Jim Bridenstine, who called the SpaceX flight the "dawning of a new era in American human space flight."

The splashdown was closely monitored at SpaceX's mission control in Hawthorne, Calif., where parachute deployments and other developments brought whoops of celebration. The yells then turned into roars of cheering applause after Crew Dragon finally hit the water safely and well within sight of its recovery boats off the Florida coast.

The Atlantic Ocean landing is the first in nearly 50 years for a capsule that was designed for humans, NASA says. The last such incident: the Apollo 9 splashdown on March 13, 1969.

Successful splashdown of the #CrewDragon right on time at 8:45 a.m. ET. pic.twitter.com/0qHhHzD4Js

The splashdown was the final test on this mission for Crew Dragon, during a flight test for a capsule that could become the first U.S. craft to carry astronauts into space since the shuttle program was phased out in 2011. 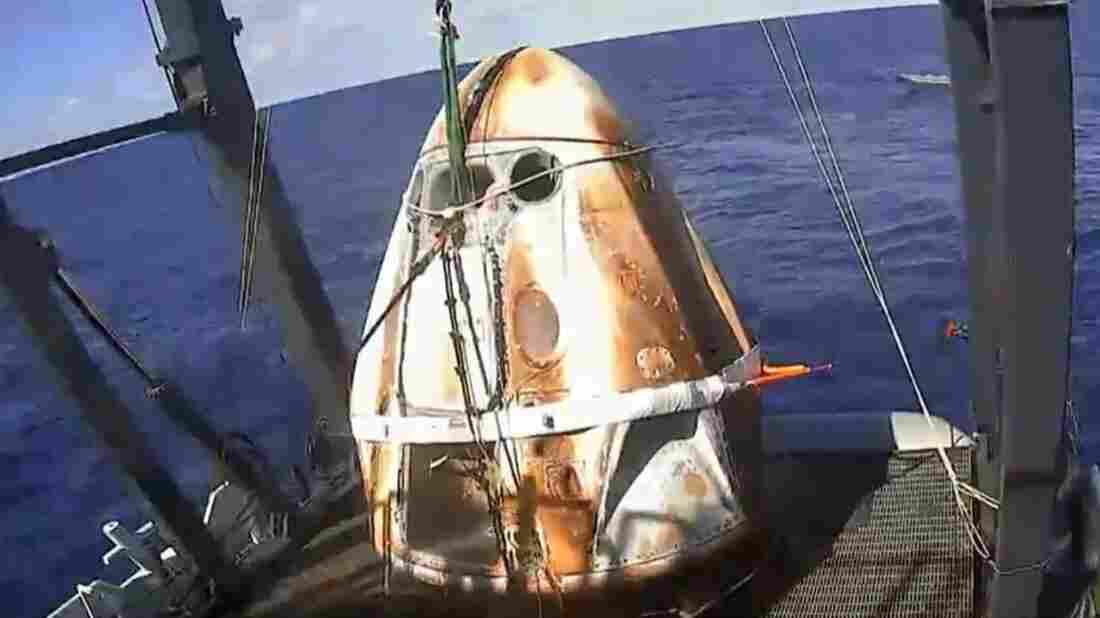 The Crew Dragon capsule was fished out of the Atlantic Ocean off the Florida coast shortly before 10 a.m. ET Friday, with its surface bearing the scorch marks of its fiery re-entry. NASA TV / Screenshot by NPR hide caption 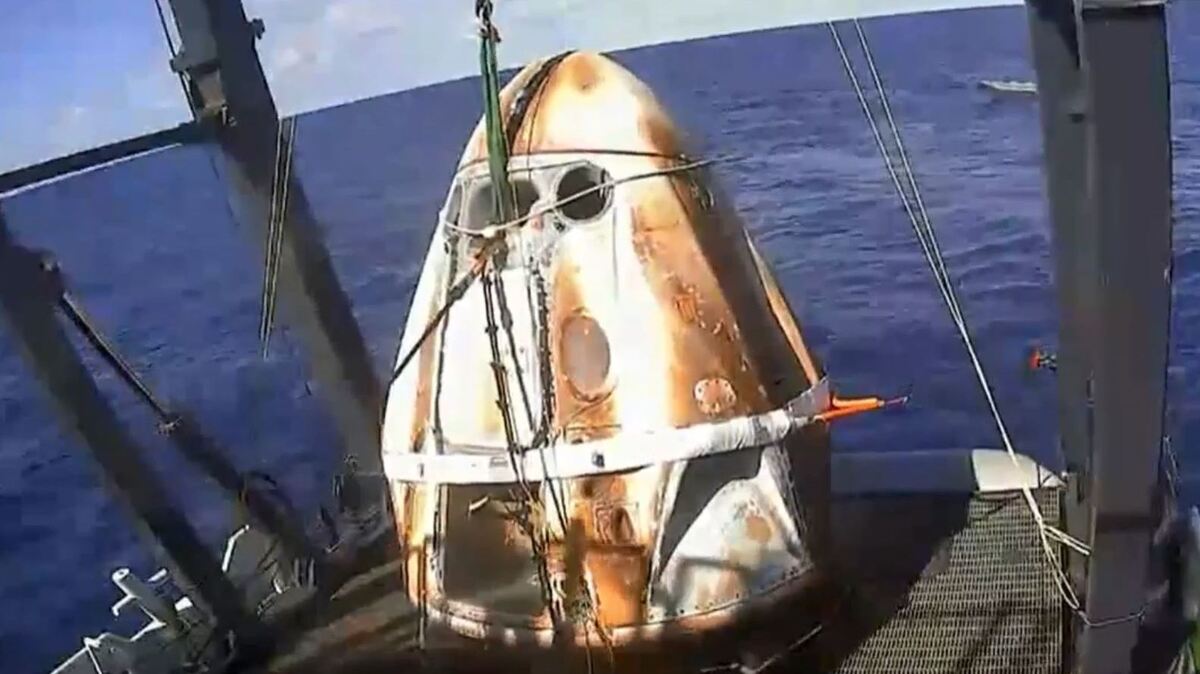 The Crew Dragon capsule was fished out of the Atlantic Ocean off the Florida coast shortly before 10 a.m. ET Friday, with its surface bearing the scorch marks of its fiery re-entry.

About an hour after it landed, recovery crews fished the Crew Dragon capsule out of the ocean, using a crane to place it on the "nest" — its resting spot on the aft deck of the Go Searcher recovery ship. In contrast to the pristine white hull seen in earlier phases of its mission, the vehicle now bears long scorch marks from its fiery re-entry to Earth's atmosphere.

"We have a lovely toasted marshmallow sitting in the nest of our recovery ship," said SpaceX Program Reliability Engineer Kate Tice.

The SpaceX craft did not carry a crew on this demonstration flight, which began on March 2 with a launch at Kennedy Space Center in Florida. Instead, it carried a sensor-laden test dummy named Ripley — named for Sigourney Weaver's character in the Alien films. The dummy is part of the test to make sure the capsule is suitable for humans during space travel.

"We measure the responses on the human body, obviously, and measure the environment," SpaceX Vice President of Mission Assurance Hans Koenigsmann said before the launch. "We want to make sure that everything is perfect."

A piloted flight test of the Crew Dragon could happen as soon as July, when it will carry NASA astronauts Bob Behnken and Doug Hurley.

Describing the re-entry process, Behnken said Friday on NASA TV that it is a memorable and emotional experience, both because it signals the end of a mammoth undertaking and for its physical qualities.

"You actually see the light from the atmosphere, as it heats up the external portions of the space craft. You see some orange lights flickering, the plasma kind of go past the windows."

On the Crew Dragon, he noted, "the windows will be down near our feet on this vehicle. That'll be our closest view out the window. It's definitely something that we'll be able to see, and know the outside of the vehicle is going through something pretty severe — and we'll be hoping it takes care of us as it takes us through entry."

Beautiful view of the @SpaceX #CrewDragon as it successfully undocked from the International Space Station pic.twitter.com/ycnkagpJbx

Crew Dragon also took a cargo of about 400 pounds into orbit. When the capsule returns, it will bring back a trove of scientific samples from research projects, along with other equipment.

The SpaceX capsule passed a crucial test on March 3, when the commercial spacecraft docked at the International Space Station. Its hatch was then opened by astronaut David Saint-Jacques and cosmonaut Oleg Kononenko, who entered the capsule to perform tests.

The SpaceX Crew Dragon is part of NASA's Commercial Crew Program, in which it collaborates with private companies to develop new options for human space travel — and end U.S. reliance on Russian space vehicles to get astronauts into orbit.

In addition to founder Elon Musk's SpaceX, Boeing is preparing an uncrewed test flight of its Starliner craft for possible launch next month, with a crewed mission possible in August.