Accessibility links
U.S. Soccer Is Sued By Women's National Team For Gender Discrimination The lawsuit argues that U.S. Soccer has a policy of paying the women's team less than the men's. "We deserved to be paid equally for our work, regardless of our gender," says player Alex Morgan. 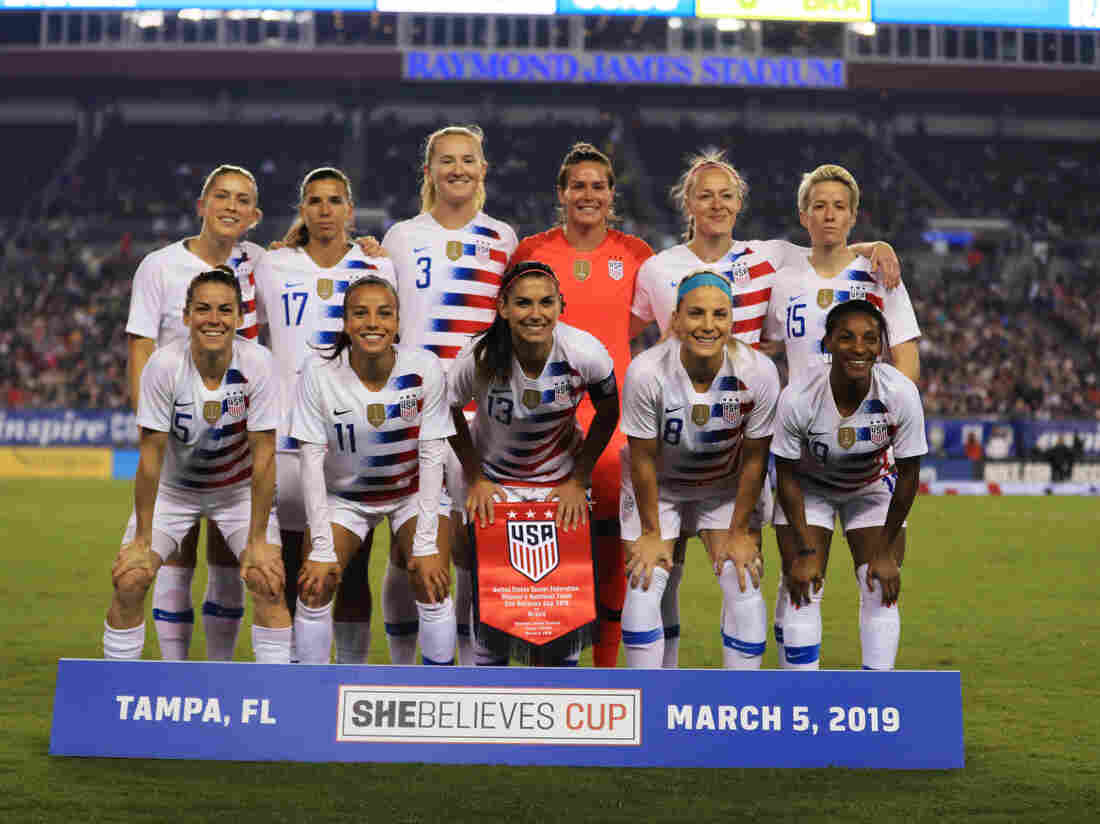 The members of the U.S. women's national soccer team filed a lawsuit Friday against U.S. Soccer, accusing it of gender discrimination. The starting 11 are seen here before playing Brazil earlier this week in Tampa, Fla. Mike Ehrmann/Getty Images hide caption 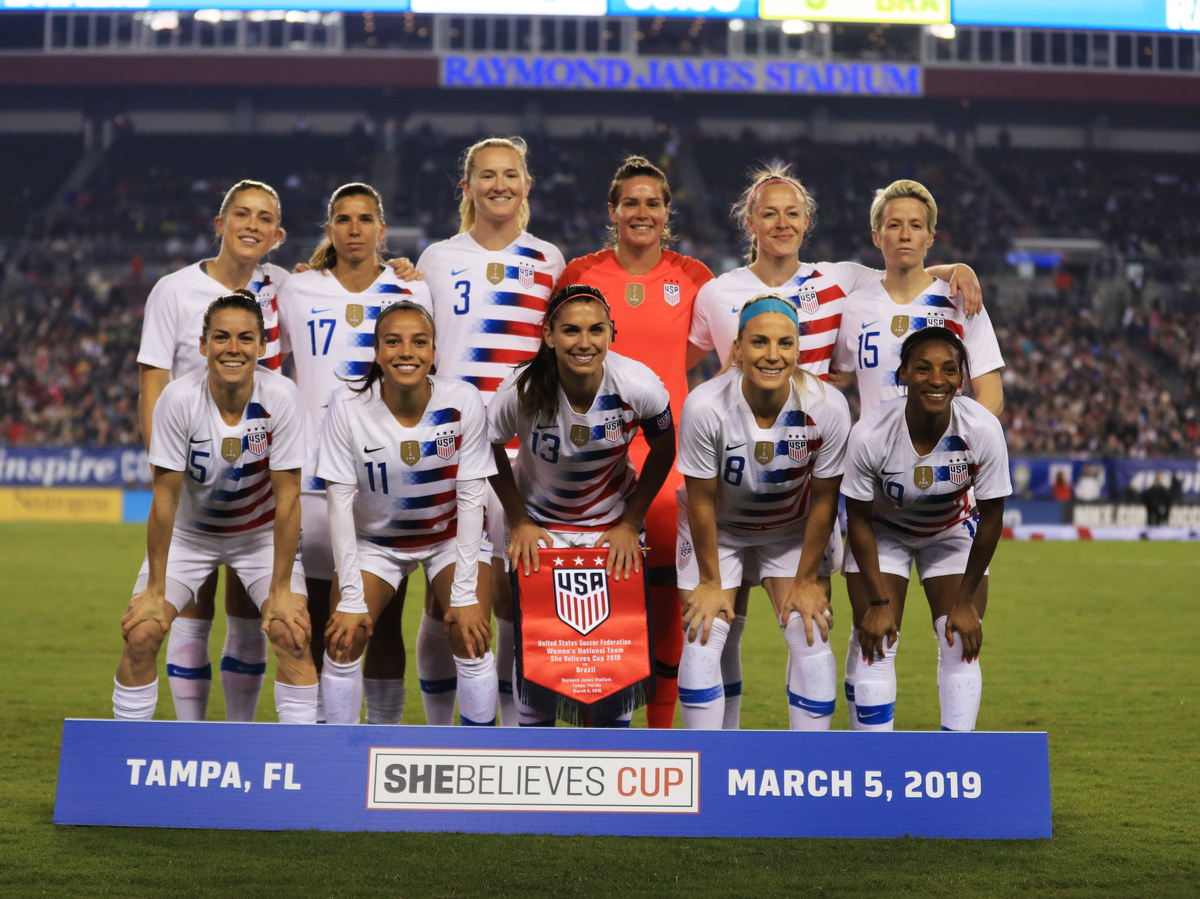 The members of the U.S. women's national soccer team filed a lawsuit Friday against U.S. Soccer, accusing it of gender discrimination. The starting 11 are seen here before playing Brazil earlier this week in Tampa, Fla.

The U.S. women's soccer team has filed a lawsuit against U.S. Soccer, accusing it of gender discrimination.

The complaint, filed Friday in California district court, argues that U.S. Soccer "has a policy and practice of discriminating" against members of the women's national team on the basis of gender, by paying them less than similarly situated members of the men's team.

Twenty-eight members of the women's team are named as plaintiffs, including many of the sport's biggest stars: Alex Morgan, Carli Lloyd and Megan Rapinoe. The lawsuit seeks to be a class action, representing other women who've played for the U.S. national team and who may have been denied equal pay for substantially equal work.

The issue of unequal pay has been a highly contentious matter in recent years, and the U.S. women's team has kept the pressure on U.S. Soccer. The women's team reached a new collective bargaining agreement with the federation in 2017.

Four of the plaintiffs — Morgan, Lloyd, Rapinoe and Becky Sauerbrunn — filed a charge of discrimination with the Equal Employment Opportunity Commission in 2016, on behalf of themselves and similarly situated players. But no progress was made, and last month, the EEOC issued letters giving the four the right to sue.

"Each of us is extremely proud to wear the United States jersey, and we also take seriously the responsibility that comes with that," Morgan said in a statement reported by The Associated Press. "We believe that fighting for gender equality in sports is a part of that responsibility. As players, we deserved to be paid equally for our work, regardless of our gender."

U.S. Soccer declined to comment on the pending litigation.

The filing comes on International Women's Day – and less than three months before the Women's World Cup kicks off in France. The U.S. women's team, currently ranked No. 1 in the world, hopes to defend the World Cup it won four years ago.

The U.S. Women's National Team, or USWNT, has consistently been more successful than the men's team. The U.S. women have won the World Cup three times and are four-time Olympic champions. The men's team has never won either tournament and failed to qualify for the 2018 World Cup.

Despite their success and popularity, the women are paid less by U.S. Soccer than the men. The lawsuit details how the pay gap plays out in myriad ways: Women's players paid less for each "friendly" match, they're paid less for making the team's World Cup roster, and they're paid much less for their performance at the World Cup.

"A comparison of the WNT and MNT pay shows that if each team played 20 friendlies in a year and each team won all twenty friendlies," the complaint says, "female WNT players would earn a maximum of $99,000 or $4,950 per game, while similarly situated male MNT players would earn an average of $263,320 or $13,166 per game against the various levels of competition they would face." In other words, a top-tier women's player would earn just 38 percent of the compensation of a similarly situated player on the men's team.

But direct comparisons of compensation between the men and women can be tricky, as The New York Times notes: "Each team has its own collective bargaining agreement with U.S. Soccer, and among the major differences are pay structure: the men receive higher bonuses when they play for the United States, but are paid only when they make the team, while the women receive guaranteed salaries supplemented by smaller match bonuses."

The lawsuit points out that for their success in winning the 2015 Women's World Cup, the U.S. women were paid less than a third of what the U.S. men were paid for losing in the Round of 16. The pools of bonus money are meted out to countries by FIFA, soccer's international governing body, but it's up to U.S. Soccer to decide how the money is divvied up.

FIFA plans to double the prize money it awards nations at this summer's Women's World Cup, but the purse will still be a fraction of what the men collect.

The union representing the members of the U.S. Men's National Team, whose own collective bargaining agreement expired last year, issued a statement supportive of the USWNT's efforts to be paid equally. "Specifically, we are committed to the concept of a revenue-sharing model to address the US Soccer Federation's 'market realities' and find a way towards fair compensation. An equal division of revenue attributable to the MNT and WNT programs is our primary pursuit as we engage with the US Soccer Federation in collective bargaining."