Accessibility links
Googling Strangers: One Professor's Lesson On Privacy In Public Spaces Kate Klonick asked her law students at St. John's University to try to identify people they came across in public, based solely on what they said and wore. It was surprisingly easy.

3:56
Googling Strangers: One Professor's Lesson On Privacy In Public Spaces 3:56 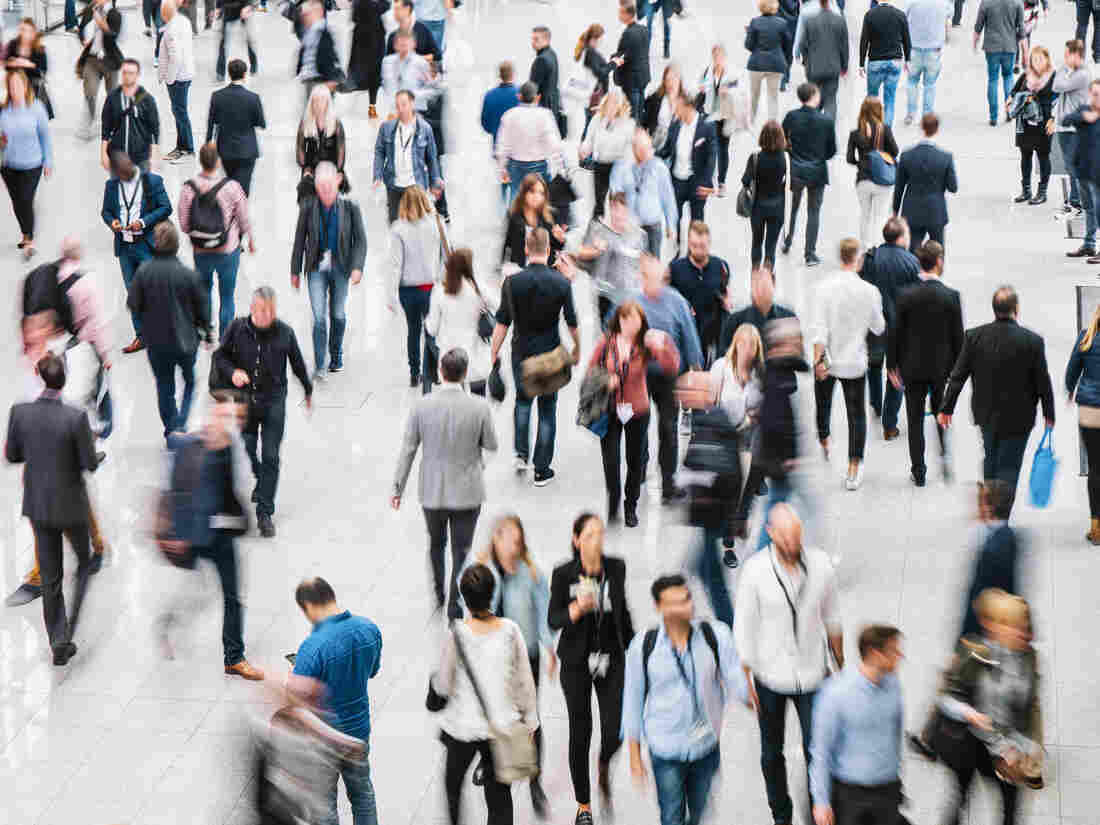 Kate Klonick, assistant professor of law at St. John's University, gave her students an optional assignment for spring break: Try to identify a stranger based solely on what they reveal in public. Above, strangers commuting in London. Classen Rafael / EyeEm/Getty Images/EyeEm hide caption 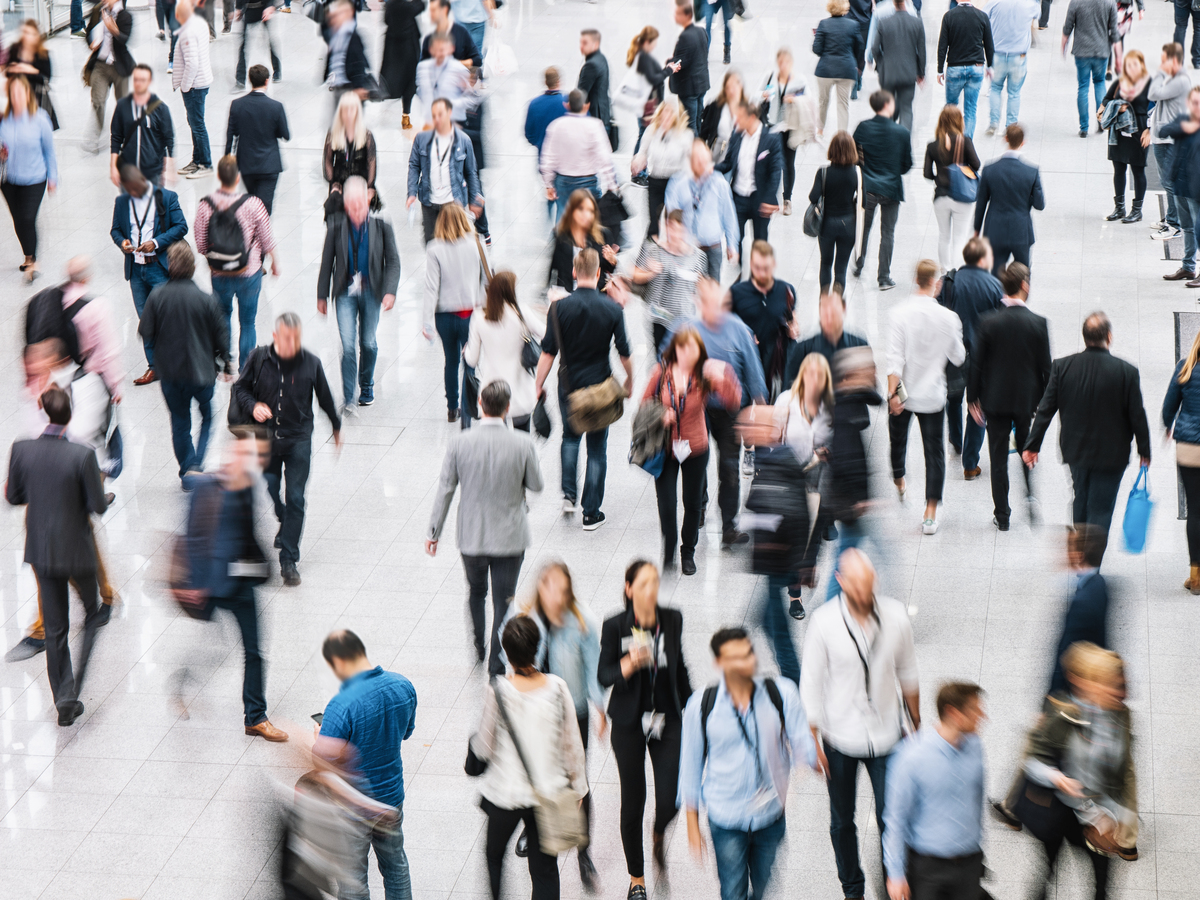 Kate Klonick, assistant professor of law at St. John's University, gave her students an optional assignment for spring break: Try to identify a stranger based solely on what they reveal in public. Above, strangers commuting in London.

Charlotte Lehman could hear the man reading his credit card number out loud from across the Starbucks.

He was speaking to a companion, but his voice carried over the music to where Lehman sat. Surrounded by a dozen or so people, the speaker also divulged his phone number a­­nd home address.

After that, all it took for Lehman to identify him was a quick Google search. She was able to find the man's full name, what he does for a living and his professional website. She even heard him sharing a password.

Lehman, a third year law student, wasn't Googling the stranger for fun. She was on a homework assignment from her professor — to "de-anonymize" someone in a public place.

Kate Klonick, assistant professor of law at St. John's University, where Lehman studies, says she gave her students the task as an optional assignment for spring break. The goal: Try to identify a person based solely on what they reveal in public, including anything displayed on their clothing or bags, like a monogram or a school logo.

At first, her students joked that the assignment was a little "creepy," Klonick tells Scott Simon in an interview with NPR's Weekend Edition. But her goal wasn't for them to use or share that information.

Instead, she wanted them to understand the gap between our perception of how much privacy we think we have in public spaces — and the reality. And, as she puts it, "to show them how thin our privacy constructions are in the modern day."

Her students, who scattered across the country for break, started writing to her in astonishment. Some of the most outspoken skeptics of privacy protections in her class — the ones who once suggested that they didn't need privacy because they had nothing to hide — were stunned at how quickly they'd found out details of the lives of strangers who happened to cross their paths.

"It's really quite easy," Klonick says. "Which is part of ... the scary, kind of, learning tool about this exercise."

One student found the name of a man on a plane after hearing him arrange his pickup from the airport. Another pinned down the identity of a stranger on a train by putting together the name of the college on his shirt with a first name overheard in conversation.

Then there was Lehman.

"I was shocked because I wasn't even trying," Lehman says. "It didn't seem like anyone was paying attention, but he divulged so much personal information."

Whether you're in a cheering stadium or a packed commuter train, it's easy to assume that no one is paying attention to you. And before smartphones, even if someone overheard your conversation, they'd usually have a hard time piecing together whatever information they gathered. The level of effort required to get a complete picture of your identity would, effectively, serve as a deterrent and a privacy protection.

Not anymore. With Google at our fingertips, it's increasingly easy to learn a lot about a stranger, even with just a few details.

Klonick says the assignment "shows us at the very least that lot of the older mechanisms we used to have to protect privacy are no longer particularly robust in the Internet age, obscurity being one of them."

She's quick to point out that most people aren't going to Google the person in line next to them at the grocery store. But they could. And that's what she hoped her students would take away from the assignment.

"What I was really trying to teach them is that we have very few laws that do this type of protection — and we might not even want them — but that there have to be some type of protections for privacy," Klonick says. So whether it's new laws or something as simple as more entrenched norms around respecting privacy, "we have to be really conscious of those and do a little more education on some of those things if we want to create future protections, either in law or just in society in general."

The lesson was not lost on Lehman. She says she's been thinking more about the evolving landscape of privacy law — and looking forward to meeting with her class again this week. She's curious about what her classmates learned, especially the ones who were most casual about their own privacy.

As for her own expectation of privacy, she's already more conscious of what she reveals inadvertently, even when she's just chatting with her sister.

She's realized that a few words about something as innocuous as her dogs, which she likes to feature on Instagram, could be enough for a stranger to identify either one of them. And that, she says, is at least a little unsettling.