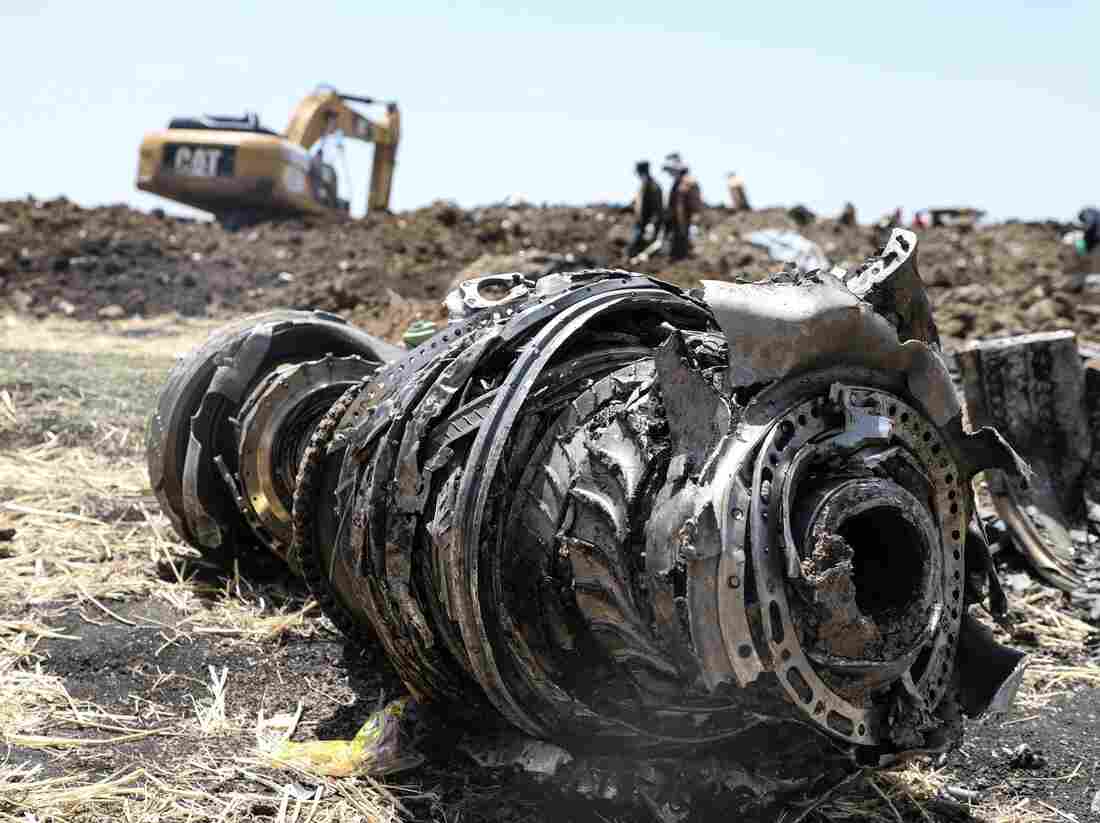 Debris from an Ethiopian Airlines Boeing 737 Max 8 jet sits in a field near Bishoftu, where the plane crashed after taking off from Ethiopia's capital city, Addis Ababa, on Sunday. Michael Tewelde/AFP/Getty Images hide caption 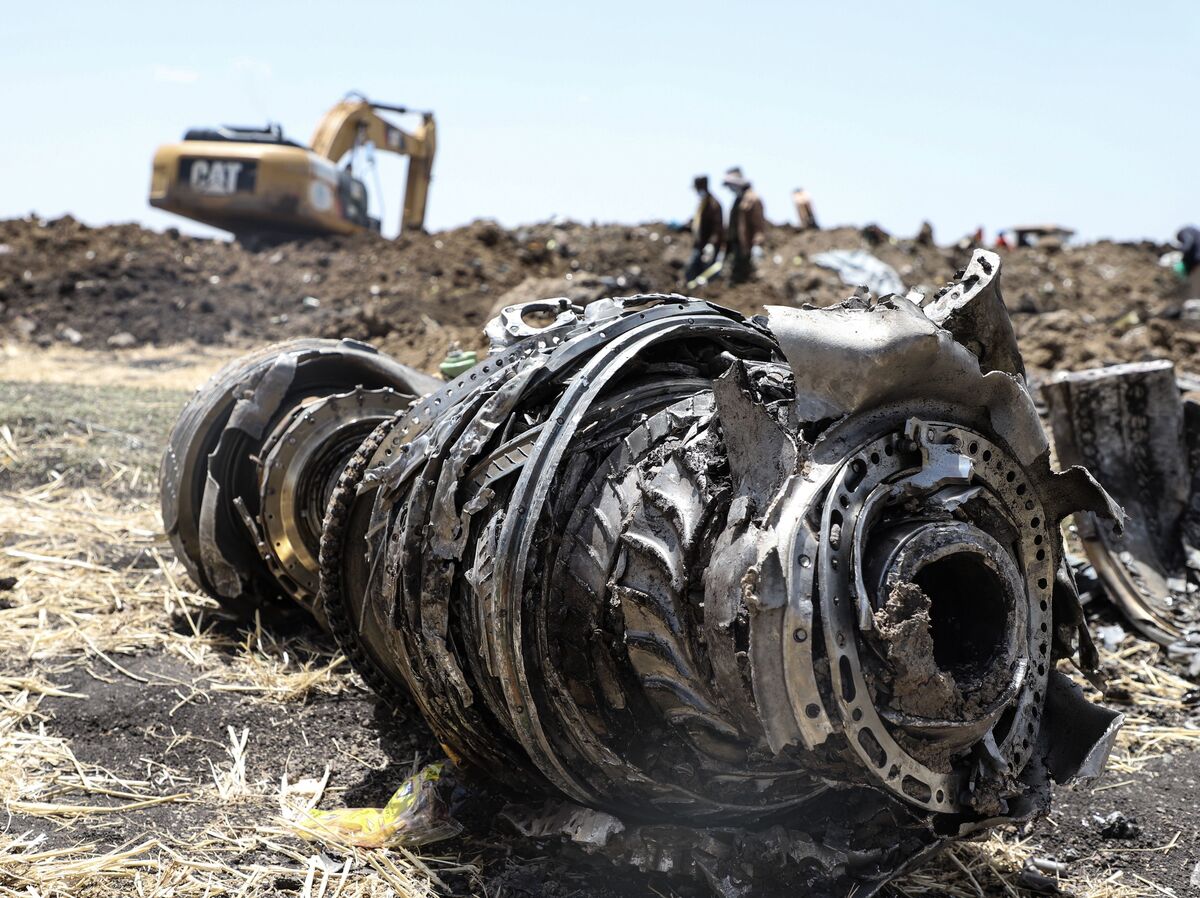 Debris from an Ethiopian Airlines Boeing 737 Max 8 jet sits in a field near Bishoftu, where the plane crashed after taking off from Ethiopia's capital city, Addis Ababa, on Sunday.

The Federal Aviation Administration says it plans to require a series of design changes to the Boeing 737 Max fleet after a pair of fatal plane crashes including one Sunday in Ethiopia that killed all 157 people on board. Airlines in other countries have grounded their Boeing 737 Max jets.

As NPR's Russell Lewis reports, the FAA plans to order the changes by next month.

"While the FAA doesn't plan to ground the aircraft, the agency says it wants a number of changes to all existing and future 737 Max jets. The recommendations are based on what's been learned following the crash of a Lion Air flight in Indonesia last October," said Lewis.

"The FAA order includes changes to the software that forces the nose down in certain situations to prevent an aerodynamic stall. Other updates include new checklists and enhanced training requirements."

Late Monday, Boeing said it "has been developing a flight control software enhancement for the 737 Max, designed to make an already safe aircraft even safer."

"This includes updates to the Maneuvering Characteristics Augmentation System (MCAS) flight control law, pilot displays, operation manuals and crew training," the company said in a statement published on its website. "The enhanced flight control law incorporates angle of attack (AOA) inputs, limits stabilizer trim commands in response to an erroneous angle of attack reading, and provides a limit to the stabilizer command in order to retain elevator authority."

Boeing said the software enhancement will be deployed across the 737 Max fleet in the coming weeks.

Deeply saddened by the news this morning of the plane crash in Ethiopia, claiming the lives of all on board. My heartfelt condolences to the families and loved ones of all the victims — including our own @UN staff — who perished in this tragedy.

The announcements by Boeing and the FAA come as the company is fighting to save its reputation.

Search crews have recovered both the digital flight data recorder and cockpit voice recorder of Ethiopian Airlines Flight 302 — the jet that crashed near Addis Ababa on Sunday morning.

The Boeing 737 Max 8 was carrying 149 passengers and eight crew members when it left Ethiopia's capital city at 8:38 a.m. local time, headed for Nairobi. About six minutes later it crashed in a field near Bishoftu, some 35 miles southeast of Addis Ababa. Scenes from the site Sunday morning showed a large crater or deep furrow in the earth, under what look to be clear skies.

It's the second disaster involving a Max 8 aircraft in less than six months, prompting China and Indonesia to ground their fleets of the jets. Last October, 189 people died when a Lion Air jet fell into the Java Sea after departing Jakarta, Indonesia. In both cases, new Boeing planes crashed shortly after taking off — and after their pilots had contacted the control tower to request an emergency return.

There were 35 nationalities represented on the flight, including 32 Kenyans, 18 Canadians, nine Ethiopians and eight people each from China and the U.S.

The victims include 21 U.N. staff members, including seven members of the World Food Program and two from the Office of the High Commissioner for Refugees. As the organization mourns those who were lost, the U.N. and its agencies will fly its flag at half-staff.

"My heartfelt condolences to the families and loved ones of all the victims — including our own @UN staff — who perished in this tragedy," U.N. Secretary-General António Guterres said in a statement about the crash Sunday.

A student at Georgetown University's law school in Washington was also on the flight. The school issued a statement saying Cedric Asiavugwa, a native of Kenya who was involved in refugee work, had been traveling to Nairobi after the death of his fiancee's mother.

Ethiopian Airlines says the jet had undergone "a rigorous first check maintenance" on Feb. 4 and that the pilot was a senior captain named Yared Getachew, with more than 8,000 flight hours of experience.

Ethiopian Airlines says it's grounding the remaining four Boeing jets in its fleet.

"Although we don't yet know the cause of the accident, we had to decide to ground the particular fleet as extra safety precaution," the carrier said.

In response to the crash in Ethiopia, China's Civil Aviation Administration ordered the country's airlines to ground all Boeing 737 Max 8 planes on Monday, citing similarities in the crashes of two recently delivered aircraft.

The Chinese aviation agency's order affects nearly 100 aircraft, according to Flightradar24; the regulator said it will confer with the U.S. Federal Aviation Administration and Boeing about how to ensure the airliners are safe.

Aviation regulators in Indonesia also have halted flights of the new Boeing jets, a decision that affects nearly a dozen planes. And in the Caribbean, Cayman Airways said it will suspend use of its two Boeing 737 Max 8 aircraft.

In the U.S., Southwest Airlines — which uses a fleet of 34 Boeing 737 Max 8 aircraft — says it is not planning any changes in service and that it is in contact with Boeing about the Ethiopian crash.

"We remain confident in the safety and airworthiness of our fleet of more than 750 Boeing aircraft," Southwest spokesperson Chris Mainz told NPR in an email.

A similar statement came from American Airlines, which operates 24 of the planes.

American said its safety and flight teams "will closely monitor the investigation in Ethiopia, which is our standard protocol for any aircraft accident."

The U.S. National Transportation Safety Board says it is sending a four-person team to support the Ethiopian Accident Investigations Bureau's probe, adding that the team has "expertise in systems/structures, powerplants and operations and will be assisted by technical advisers from FAA, Boeing and GE."

Boeing extended its condolences to the victims and their families, saying the aviation company is sending a technical team to visit the crash site.

In a letter to Boeing employees, CEO Dennis Muilenberg said "we're committed to understanding all aspects of this accident."

"I know this tragedy is especially challenging coming only months after the loss of Lion Air Flight 610. While difficult, I encourage everyone to stay focused on the important work we do. Our customers, business partners and stakeholders depend on us to deliver for them," Muilenberg said.

In both the Indonesian and Ethiopian disasters, the airliners "appear to have crashed after going into a nosedive, and pilots of both planes ... may have been struggling for control of the aircraft," NPR's David Schaper reports. "But there is a key difference, and that is that pilots had reported some earlier trouble with the Lion Air 737 Max 8 plane," regarding erroneous data from a sensor measuring the airliner's pitch.

United Airlines says that although it doesn't have any Max 8 aircraft in its fleet, it does have 14 Max 9 jets. And a media representative adds that the airline is certain that "the Boeing 737 Max aircraft is safe and that our pilots are properly trained to fly the Max aircraft safely."

Boeing's stock price, which has more than doubled in the past two years, dipped sharply Monday morning, falling by more than 11 percent at one point in trading. Share prices recovered, falling 5 percent by the end of the day.

Earlier this year, Boeing cited the 737 Max family as a key reason it had gained new ground against Airbus, its European archrival. The company also ramped up production of the 737 planes, saying it faced a seven-year order backlog.

Worldwide, Boeing has delivered 350 of the 737 Max planes to commercial airlines. That figure is slated to rise sharply, as Boeing has orders outstanding for more than 4,660 of the passenger jets.