Accessibility links
Elderly Veterans Commit Suicide At A Higher Rate Than Non-Veterans There's been an alarming rise in the suicide rate among younger veterans. But elderly veterans commit suicide at a rate higher than the non-veteran population. The VA wants to find out how to stop it. 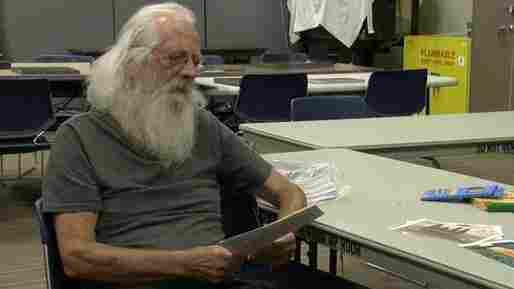 Much of the focus by the Veterans Health Administration has been on the growing number of younger veterans who commit suicide. However, statistics show that the suicide rate for elderly veterans is higher than that of non-veterans of the same age.

Robert Neilson was drafted in 1961. He spent two years in the Army just before the Vietnam War. Three years ago, the 76-year-old came into the VA Hospital in San Diego after contemplating suicide.

"That's what really brought me into the emergency room. That wasn't really the first time," Neilson said. "Two months after I got out of the service, I attempted suicide."

After he got out of the Army, Neilson remembers going back home to New Jersey. He was standing on a subway platform watching a speeding train."

"And I figured if I just hold my hands in the air, I could just let [the train] suck me in," Neilson said. "Somebody shouted, 'What are you doing?' And that was enough to snap me out of the trance. But I still didn't seek any help. I just figured, OK, I'll just struggle through life."

And he did. It would take another 50 years for Neilson to get help dealing with the trauma of a sexual assault he experienced in the military.

"And the guilt was, I wasn't strong enough to overpower that person. Plus, it was a high-ranking person," he said.

That was all he wanted to say about the incident that has haunted him most of his life.

All sorts of service-related issues can lie dormant only to crop up later in life, said Ron Stark. Stark founded Moving to Zero, a nonprofit group in San Diego aimed at preventing veteran suicide. He counsels fellow veterans there who have contemplated suicide and more than a few are elderly.

Stark retired from the Navy in 1994. He served aboard a submarine in the Arctic in the 1970s and again during Desert Storm. He understands that, for some older veterans, no accomplishment is ever enough.

"We have things about stolen valor. Nobody wants to misrepresent themselves," he said. "So I'm a Vietnam-era veteran. I'm not a Vietnam veteran. I was in Desert Storm, but I wasn't in combat. We're always talking about what we're not quite."

Stark suffered from depression most of his life and he never saw combat. He remembers sitting by the roadside with a pistol and contemplated pulling the trigger.

"The military didn't make me who I was," he said.

But the military establishes life-long habits, both good and bad. A soldier strives to be someone people can rely on, especially in critical situations.

We're not very far ahead in understanding who's out there, who's really likely to take their lives in the next hours, days, months.

So if you're not feeling 100 percent, maybe it's better to keep it to yourself, he notes. Stark describes suicidal feelings as a brief moment of blackness when other options fade from view.

The VA National Suicide Data Report for 2005 to 2016, which came out in September 2018, highlights an alarming rise in suicides among veterans age 18 to 34 — 45 per 100,000 veterans. Younger veterans have the highest rate of suicide among veterans, but those 55 and older still represent the largest number of suicides.

The Veterans Health Administration has focused on finding risk factors that could lead someone to kill themselves, such as isolation, previous suicidal thoughts and access to firearms. Another big risk factor is that older men are also more likely to reject treatment for mental health issues.

Among the people who have those risk factors, the VA still doesn't know who will attempt suicide, said Colin Depp, a psychologist at the San Diego VA who has researched suicide among older veterans.

"We're not very far ahead in understanding who's out there, who's really likely to take their lives in the next hours, days, months," he said.

The VA emphasizes getting potentially suicidal veterans in the door, where health-care workers deploy a range of treatments, he said.

That's what has helped 76-year-old Robert Nielson. He was 73 years old before he sought help.

As part of his own treatment, Neilson is now writing letters of encouragement to fellow veterans who are just beginning treatment as part of a VA program.

Neilson pulled out one of the letters he wrote and explained how he can help a veteran he will never meet in person. "I don't know you but I have faith in you. You're going to make it," he read.

The letters are just one more nudge to keep veterans away from that dark moment when suicide feels like the only option.

This story is part of the American Homefront Project, a public media collaboration on in-depth military coverage with funding from the Corporation for Public Broadcasting and The Patriots Connection.