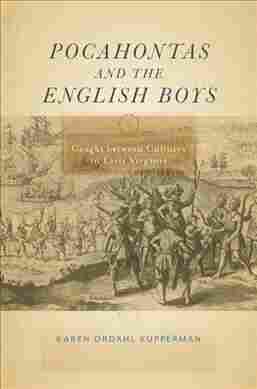 Pocahontas and the English Boys

Caught Between Cultures in Early Virginia

As the nation turns to elections in 2020, one person has emerged as the front-runner in the imagination of the electorate, if not in reality.

I'm speaking, of course, about Pocahontas.

Over 400 years ago, after she was captured by English conquerors in Jamestown, Pocahontas learned the art of survival by navigating her own agency between cultures. In her new book, Pocahontas and the English Boys, history professor Karen Ordahl Kupperman focuses a sharp light on the historical record, revealing the elements of Pocahontas' resilience and illuminating the narrative created about her by Colonial settlers.

Kupperman also presents the remarkable history of three English boys — Thomas Savage, Robert Poole, and Henry Spelman — who were traded to native communities by the English in exchange for food and the knowledge required to survive in the region's harsh environment. And while Kupperman's academic prose requires patience, the reader's perseverance will be rewarded with a culturally resonant understanding of the early confluences in America between Indigenous peoples and Europeans.

Beyond its history of the English intervention in America, Pocahontas and the English Boys illuminates what Kupperman describes as a new "Atlantic model" for this period. This perspective focuses on the fluidity of human relationships of the time, of cultural paradigms and in the use of language, in travel, and especially in the ways people identified themselves.

And so we learn how the young Pocahontas, at age 10, was already serving as a trade ambassador for native communities living in Tsenacomoca (Virginia), and that she met young Thomas Savage and helped him adjust to his new life as a cultural translator living among native people after he was given to her father, Wahunsenaca (also called Powhatan). We learn that Wahunsenaca presided over 30 native communities, and that his daughter often accompanied trade sorties to Jamestown, in part to signify the peaceful nature of their mission. We learn that preteen English boys and girls were often sent into servitude by their families as a way of "managing" their adolescence. And that adolescence for both native and European youth meant growing up fast. For Pocahontas and the English boys it meant traveling between tribal and Colonial communities, learning several languages, translating trade negotiations, teaching and learning basic farming methods to prevent starvation. It meant understanding how, what and when to translate. It meant learning the politics of human nature for survival as well as enrichment.

Pocahontas, Thomas, Robert and Henry were essential to the sustainability of their communities. Kupperman writes that "they spent the rest of their lives caught between cultures. They were the only people who could understand the goals of the Chesapeake Algonquians as well as the English and they often faced hard choices. They knew they were being used by both sides, but they also cared about the outcomes."

[Kupperman] puts Pocahontas and the English boys in their context and shows how their actions tied cultural systems together and served as cornerstones of a fragile Colonial ecosystem.

This realization of the essential empathetic nature of a culture whisperer is Kupperman's gift as a historian biographer and the core of her book. It's also a lesson for today's fractious civic culture. She puts Pocahontas and the English boys in their context and shows how their actions tied cultural systems together and served as cornerstones of a fragile Colonial ecosystem. Her description of Pocahontas' sartorial transformation from native nobility to the wife of John Rolfe will resonate with anyone who has worn an ill-fitting suit. More importantly, we learn how England's grand plans for trade and religious conversion of native peoples relied on this singular woman — via a forced junket to England to generate support for the Virginia Company as the wife of John Rolfe.

Pocahontas died on the way back to America before the grand scheme was realized. She was 21. Kupperman discerns what must have been an untenable situation for her. In England, as the mother of John Rolfe's child and a celebrity in her own right, Pocahontas' circumstances were new but assured. Returning to lead the conversion of her people was something else. Today we understand the complex science of stress-related illness. Then, things were simple: People died of broken hearts. Kupperman's informed guess — and she calls it that — is that this was Pocahontas' fate. But she's also done the detective work to back up her story that this was a journey of torment with an inevitable conclusion.

It's possible to shoulder the burden of navigating different cultures when that navigation successfully translates feelings of strangeness into common ground. But Kupperman suggests that Pocahontas' "inner turmoil over what would happen once they got back to Virginia must have been intolerable."

When translation becomes forced betrayal, even the strongest culture bearers may succumb to overwhelming pressure. Or perhaps Pocahontas chose her own agency one last time. Either way, this new take on her life and times answers questions essential to our time: What is the nature of fluidity in civic culture — what happens to us when we encounter new cultures, people, languages — not just once but frequently? And what happens to our human condition when someone else tries to shape who we are?