What Happens When You Get Kicked Off The 'Squad?'

What Happens When You Get Kicked Off The 'Squad?' 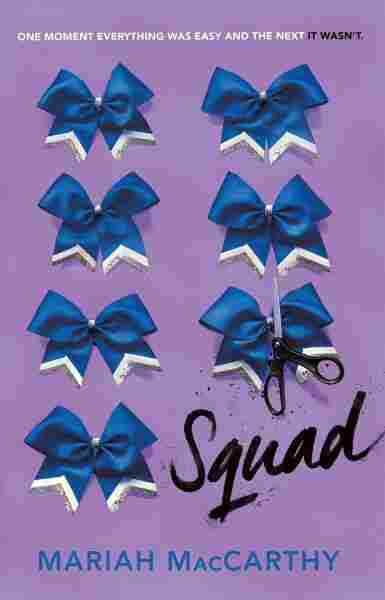 Being a cheerleader defines Jenna's world. She spends all her time with the squad, whether it's at school, at practice, or just hanging out. It's ideal, because her best friend Raejean is also a cheerleader, and they're so close that they're practically the same person.

Or at least, they used to be. Lately, Raejean has been ghosting Jenna and cozying up to another girl on the squad. The other cheerleaders are following Raejean's lead and talking about Jenna behind her back, and she just can't seem to do anything right. The longer it goes on, the angrier she gets. These girls are supposed to be her friends — but now she has no friends, and it's all because of Raejean.

Jenna's consuming desire to get back at Raejean ends in catastrophe at a cheering competition and suddenly her world's turned upside down: She's off the squad and all alone.

For a while, it seems like nothing will ever be okay again. But slowly, as she steps further outside the all-enveloping cheerleading bubble, she realizes she isn't all alone. She still has her brother, Jack, who may be a goth nerd but actually has some pretty cool friends. When he invites her to join them for some live action role playing, she isn't sure that pretending to be a vampire will be her thing. But what does she have to lose?

Zine And Heard: In 'Moxie,' A Young Woman Fights Back

'Upside Of Unrequited' Is A Fresh, Fun, Snarky Spring Fling

Soon Jenna finds herself falling in love with gaming and Jack's geeky friends — especially James, a transgender boy who seems to have a crush on her. The further she gets from the things that once defined her, the more Jenna realizes that she has no idea who she really is, or if that's even the person she wants to be.

Squad starts out quippy, with Jenna obsessing about the upheaval of her perfect cheerleader world in slightly precious teen slang. I was skeptical about whether I'd be able to like it. But I'm so glad that I stuck it out, because very quickly, the language eases into Jenna's real voice, still pop but not aggressively so. And once things start to escalate towards Jenna's fall from cheerleading grace, I was hooked.

The thing is, Jenna is not always a nice person. She makes some really bad choices, she lets her anxiety stop her from communicating clearly, and she's mean to her family. She's also deeply self-involved, to the detriment of all her relationships. Somehow, Squad manages to call her on this while at the same time letting her be sympathetic, flaws included.

'Squad' ... doesn't shy away from the things that don't work out the way we're conditioned to think they ought to.

Squad also doesn't shy away from the things that don't work out the way we're conditioned to think they ought to. Some relationships between people aren't sustainable, or they change irrevocably, and learning to accept that with grace is an important part of growing up. It feels like contemporary teen stories often reward character struggle and growth by putting a triumphant bow on the friendships or romances at the heart of the story. That can be okay — it's satisfying to get the storybook ending! But that isn't how life usually works. Sometimes you do the hard business of learning to be a good person, and instead of getting what you want, you just have to keep doing more work.

This isn't to say that Squad is all hard lumps. A big part of Jenna's journey is learning how to have fun on her own terms. It's very satisfying when she realizes that she loves making up a story for her roleplaying character and fully embraces an aspect of herself that she didn't even know existed. Likewise, her relationship with James really embodies the sort of mutual support, kindness, and deliberate consent that make for a sweet, modern teen romance. Jenna may not get everything she wants by the end of the book, but what she does get, she works for, and that makes for a satisfying journey.

Squad is a short, highly concentrated blast of a book that revels in all the best and worst feelings of high school and offers the reader a charismatic and imperfect character to fall in love with. Jenna certainly won me over, and so did Squad.