Accessibility links
Freed From ISIS, Some Yazidis Return To Iraq But Many Remain Missing As ISIS loses territory and captives are rescued, broken Yazidi families hold out hope that their loved ones could still return. 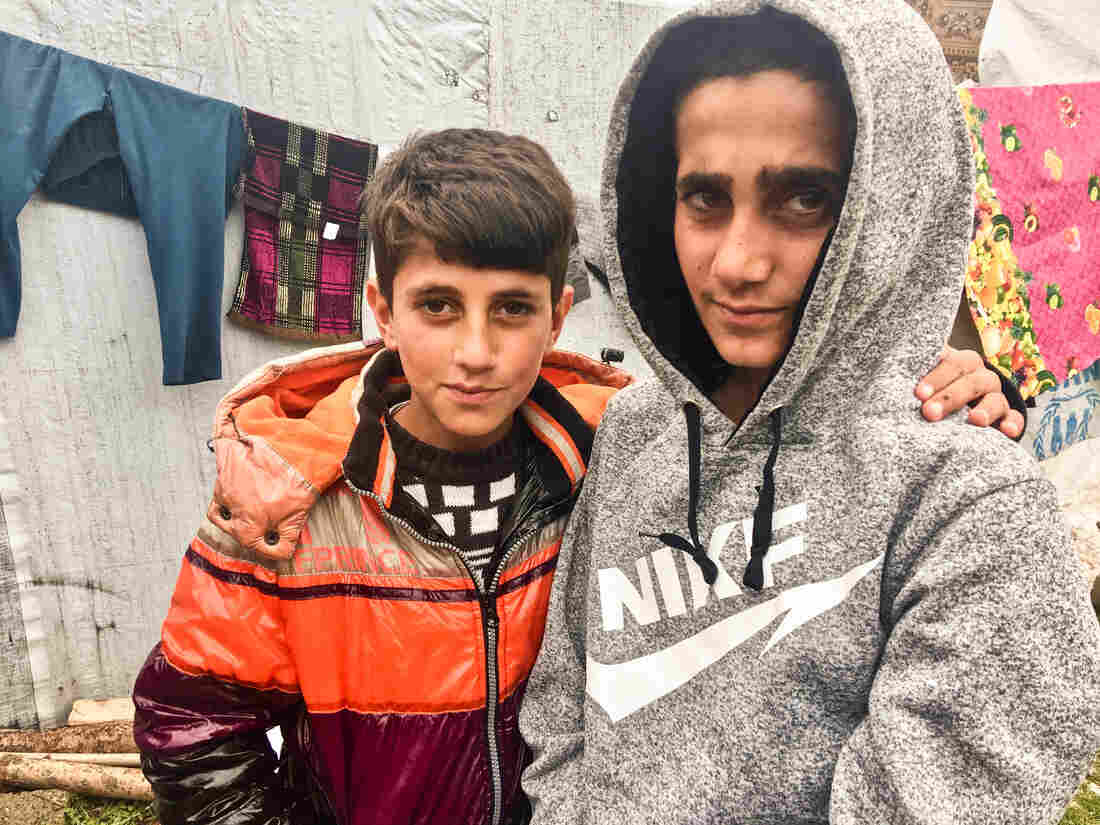 Mazen (right), 13, and his brother Mezban in a camp for displaced Yazidis in the Kurdistan region of Iraq. Mazen was freed recently, five years after being kidnapped by ISIS. He was found in Baghouz, the last ISIS stronghold in Syria. His brother was also kidnapped and, 2-1/2 years ago, was rescued with their mother. The boys' father is still missing. Jane Arraf/NPR hide caption 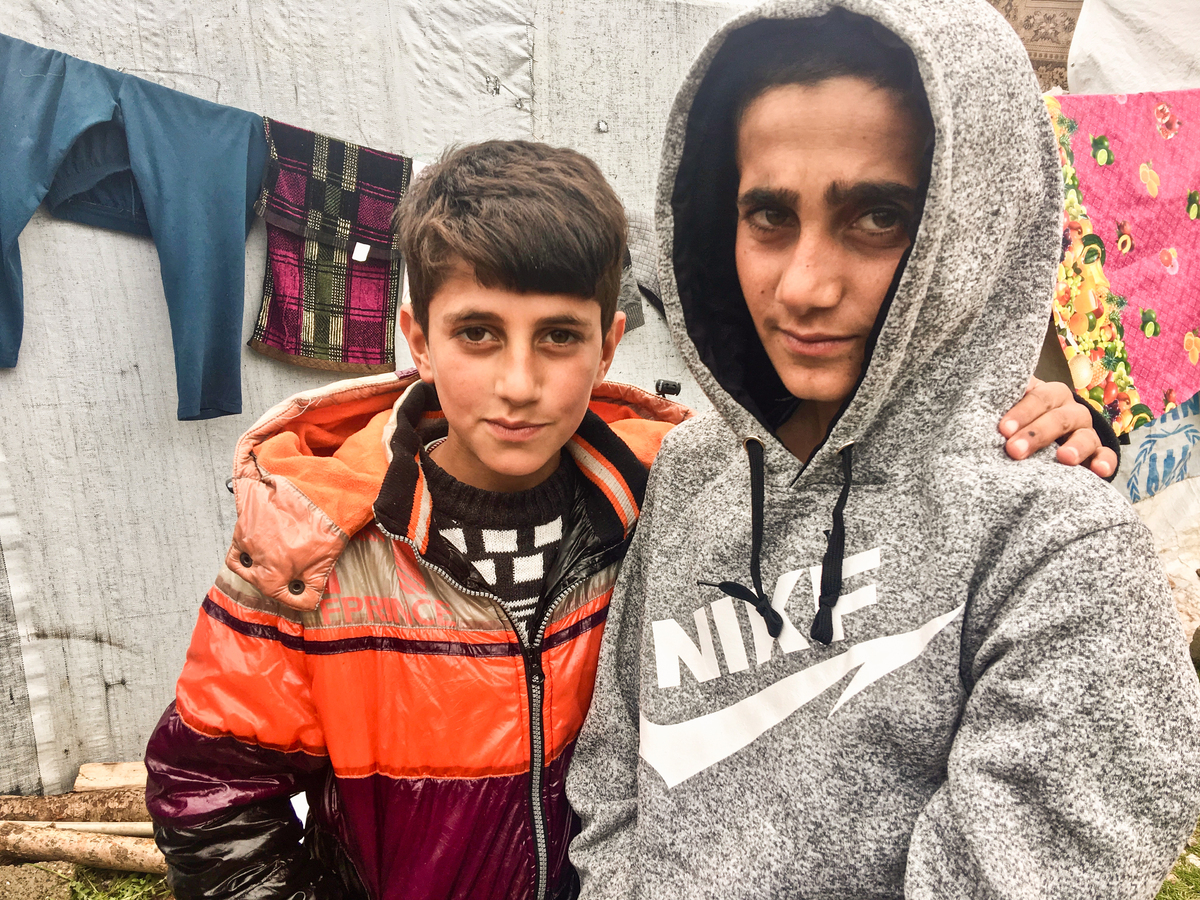 Mazen (right), 13, and his brother Mezban in a camp for displaced Yazidis in the Kurdistan region of Iraq. Mazen was freed recently, five years after being kidnapped by ISIS. He was found in Baghouz, the last ISIS stronghold in Syria. His brother was also kidnapped and, 2-1/2 years ago, was rescued with their mother. The boys' father is still missing.

Mazen looks like he wants to disappear into his gray hoody as he sits in the corner of a tent in a camp for displaced Yazidis in Iraq. The 13-year-old boy's eyes are haunted and huge in a face still gaunt from not getting enough to eat.

After almost five years held captive by ISIS, Mazen says he wants to talk about what happened to him but he doesn't have the words.

"How do I feel?" he says as if bewildered by the question. "Really I don't know how to feel."

Wrenched from his mother at age 8 after they were captured in 2014, Mazen says he and other boys were taught by ISIS in Iraq and Syria to shoot Kalashnikov assault rifles. He was being trained to kill his own people — members of the ancient Yazidi community.

Mazen is one of the survivors of ISIS' campaign of genocide against the Yazidi minority. ISIS considers the Yazidis infidels and allowed its fighters to kill and kidnap thousands of them, holding many of the women and girls as sex slaves and the boys as fighters in training. Now, as the militant group loses territory, a trickle of captives are being freed, returning to shattered families.

Hope for a more normal life

Mazen often went hungry. The only food they were given in the dying days of the ISIS caliphate in the Syrian village of Baghouz was thin lentil soup and a rough bread.

In a video posted by his Syrian Kurdish rescuers a few days before he returned home in early March, Mazen asks if something had happened to his home region of Sinjar, Iraq.

He didn't know that thousands of Yazidis had been killed or kidnapped and entire villages destroyed when ISIS invaded the Yazidi homeland in northern Iraq in 2014. Or that his father and a cousin who was like a brother to him are still missing. Or that they have no home to go back to in Sinjar.

When he arrived in the Kurdistan region near Dohuk, where tens of thousands of Yazidis live in camps, a crowd shouted his name. With each child who comes back, broken families hold out hope that their loved ones could still return.

After five years, Mazen speaks mostly Arabic — the language of his captors. He has forgotten Kurmanji, the Kurdish dialect that is the only language most of his relatives speak.

His speech is peppered with English: "yes," "wow" and "thank you" — words he says he learned from an ISIS foreign fighter.

Mazen last went to school in third grade — before ISIS. He says he has no plans for the future, other than to find work. He wants to get a car so he can drive his mother and his younger brother, Mezban, who were freed 2-1/2 years ago, home to what is left of Sinjar. ISIS taught him how to drive.

Like most Yazidis, the family is desperately poor, but his uncle Hussein says they will try to show him a more normal life.

"You can't change someone who has been captive like Mazen in just three days," Hussein says. "Our goal is we will take him on picnics, we will take him to weddings. We will make him forget the Arabic language."

A Yazidi man comes into the tent to show Mazen a laminated page of faded photos of missing children and adults. Mazen has previously told relatives of two other boys he was held with that they were killed in U.S.-led airstrikes two months ago in Baghouz. A third boy, who was 10, fell into the river and drowned while he was washing clothes. 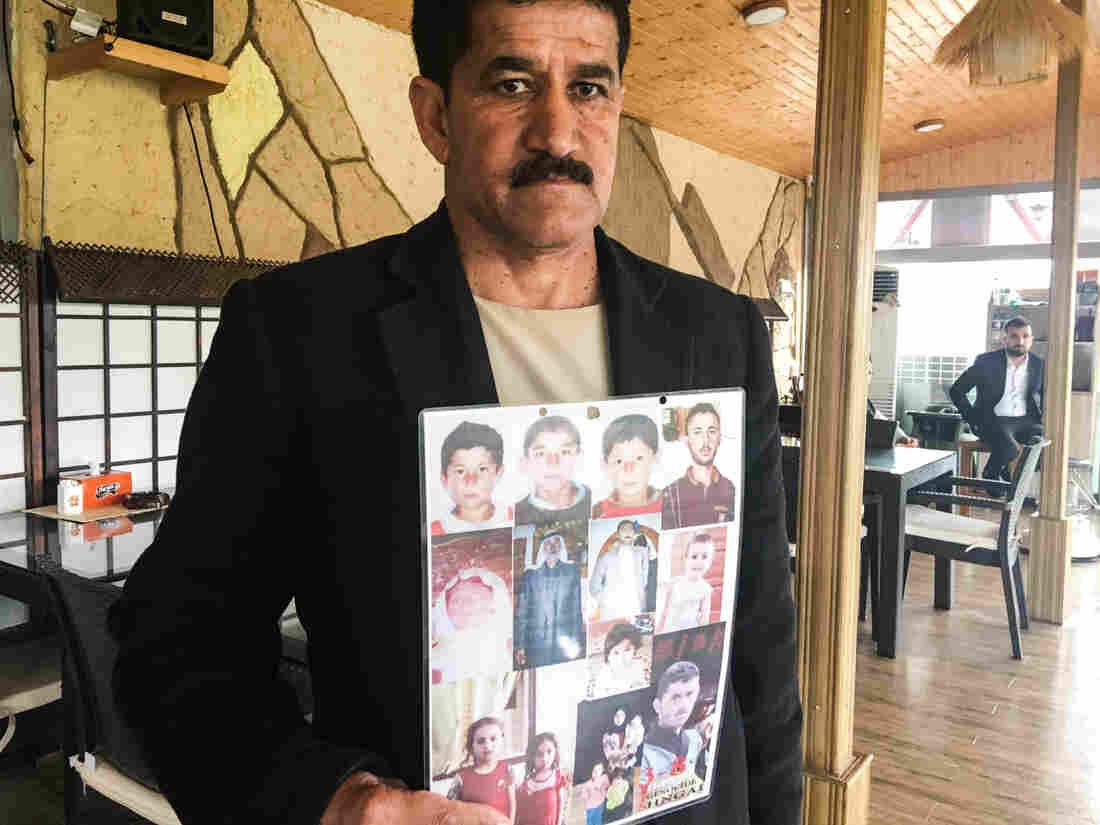 Essa Shawrdi, from the village of Kocho, Iraq, holds photos of missing relatives he has been trying to find since ISIS invaded their village in 2014. ISIS killed more than 500 Yazidis in the village, part of a campaign to exterminate the minority group, and kidnapped hundreds more. Overall, more than 6,000 Yazidis were believed taken captive and almost 3,000 are estimated to still be missing. Jane Arraf/NPR hide caption 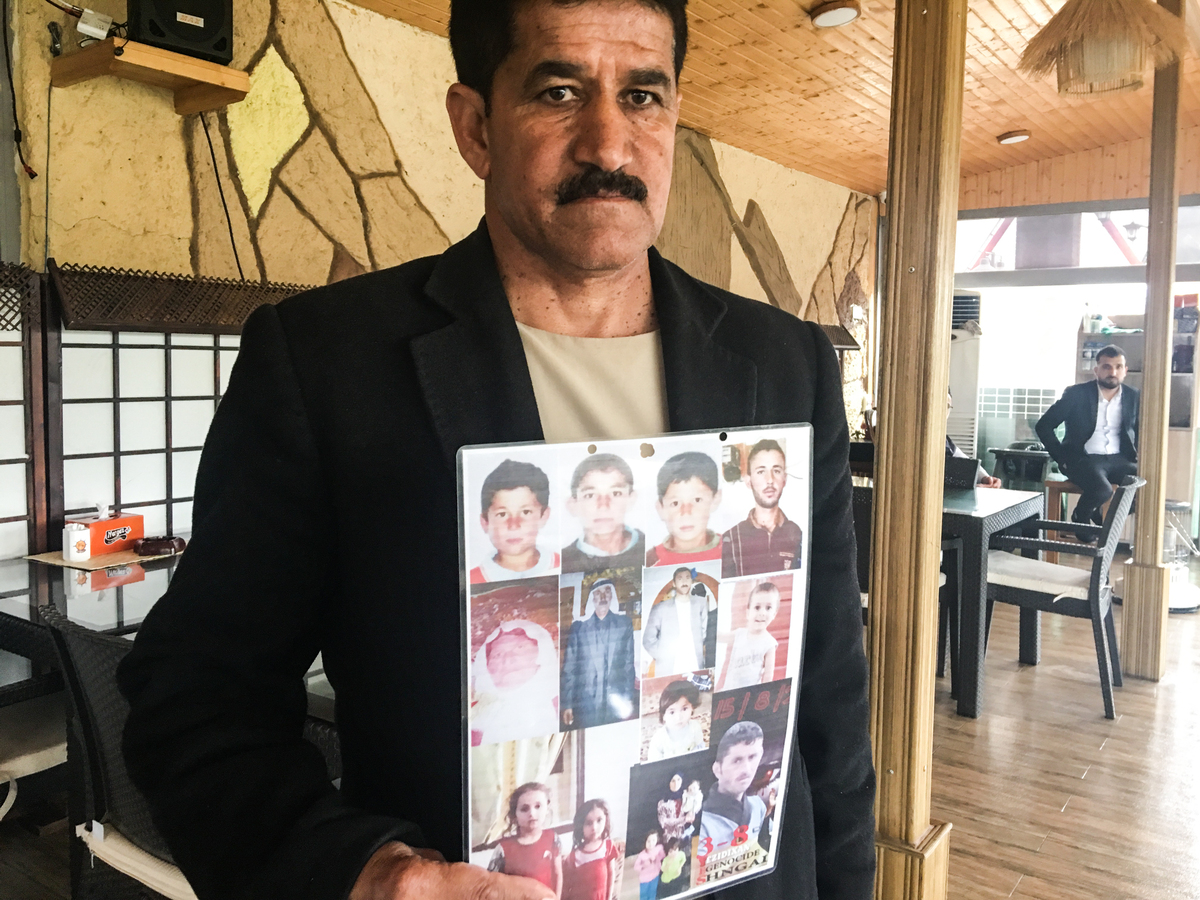 Essa Shawrdi, from the village of Kocho, Iraq, holds photos of missing relatives he has been trying to find since ISIS invaded their village in 2014. ISIS killed more than 500 Yazidis in the village, part of a campaign to exterminate the minority group, and kidnapped hundreds more. Overall, more than 6,000 Yazidis were believed taken captive and almost 3,000 are estimated to still be missing.

Mazen moves his finger along the photos. "I didn't see them," he says firmly. The man quickly takes his photo page back and leaves.

The missing Yazidis are from the village of Kocho — the site of the worst known massacre under ISIS. Iraqi Kurdish forces in charge of the area's security at the time told Yazidis they would protect them. Instead the Kurdish fighters retreated without warning, leaving hundreds of Yazidis to be slaughtered in Kocho and many more to be kidnapped.

Essa Shawrdi, the man with the photo page, has been taking the pictures of his nephews, nieces and cousins to Yazidis who have returned recently to see if anyone can give him any information.

Five years after they were kidnapped, Shawrdi knows it would be hard to recognize the children. The younger ones would likely even have forgotten their names or that they were ever Yazidi.

"There were many children who were so young when they took them they don't know who they are anymore," he says. "We are sure there are many of our people in the camps in Syria. We ask the government to help us find them."

But the Iraqi government hasn't helped find them. The search for missing Yazidis has fallen mostly to Yazidis and others working to rescue women and children, often paying to buy them back from ISIS.

Until a year ago, the Iraqi Kurdish government reimbursed the money paid by families if their loved ones were returned. But for many that trail is now going cold. Many of them are presumed dead in U.S.-led strikes targeting ISIS fighters. Others have been trafficked to other countries.

One of the Yazidis negotiating the returns is a language teacher named Ali Hussein. He was once held by ISIS and maintained contacts with fighters.

Yazidis in Sinjar confirm he has negotiated the return of dozens of women and girls.

He says the job became much more difficult when ISIS leader Abu Baker al-Baghdadi decreed recently, before the final assault on Baghouz, that ISIS families should leave the area but Yazidi captives should remain held in underground cells.

Yazidi women were no longer for sale.

"I asked them what will happen to the Yazidi women and they said, 'whatever happens to us happens to them,'" Hussein says.

In the past two weeks, as U.S. and Syrian-Kurdish forces closed in on Baghouz, about 40 Yazidi women and children held in the camps with evacuated ISIS families were found and sent back to Iraq.

Hussein thinks there might be fewer than 300 Yazidi women and children still held in Syria. He says others have been sold by ISIS to al-Qaida affiliates, which also keep sex slaves, killed in air strikes, or taken to Turkey by ISIS families.

His cellphone contains an archive of chilling messages from ISIS contacts.

In one voice mail from about a year ago, a fighter tells him he has information about an 11-year-old girl. He says the girl was sold to an emir of Jabhat al-Nusra, an al-Qaida affiliate. He says she is no longer a virgin.

And then the caller is heard bargaining.

In another message, he urges Hussein to make up his mind or he will offer the girl to someone else.

"Dear Mr. Ali, think about this matter and let me know by evening if you don't want her," the contact says.

After playing the message, Hussein remarks, "Do you know how much money $45,000 is?" Some Yazidi families in Sinjar live on less than $1,000 a year. He and the girl's family tried for more than year to raise the money and failed. They haven't heard any more about her. 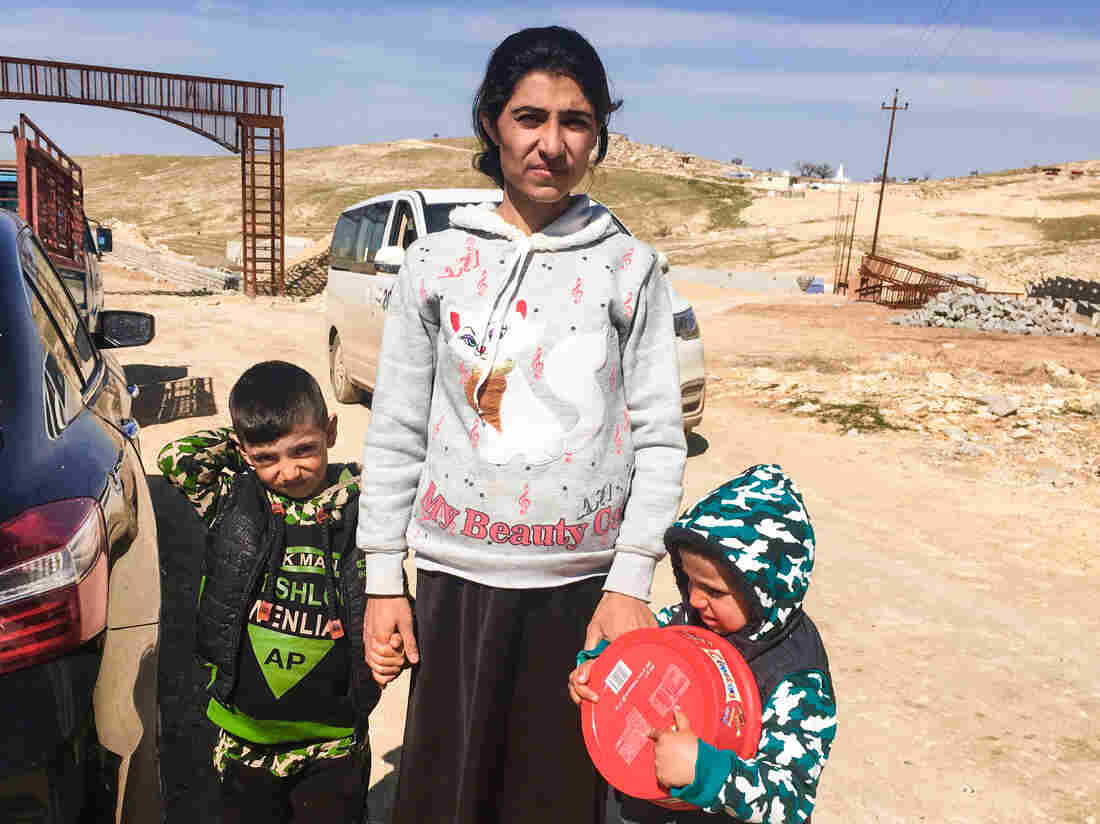 Berfe Khalaf with her children Jager (left) and Jan on Mount Sinjar two days after crossing back to Iraq from Syria, where they were held captive by ISIS. Khalaf's husband was executed by ISIS. Jane Arraf/NPR hide caption 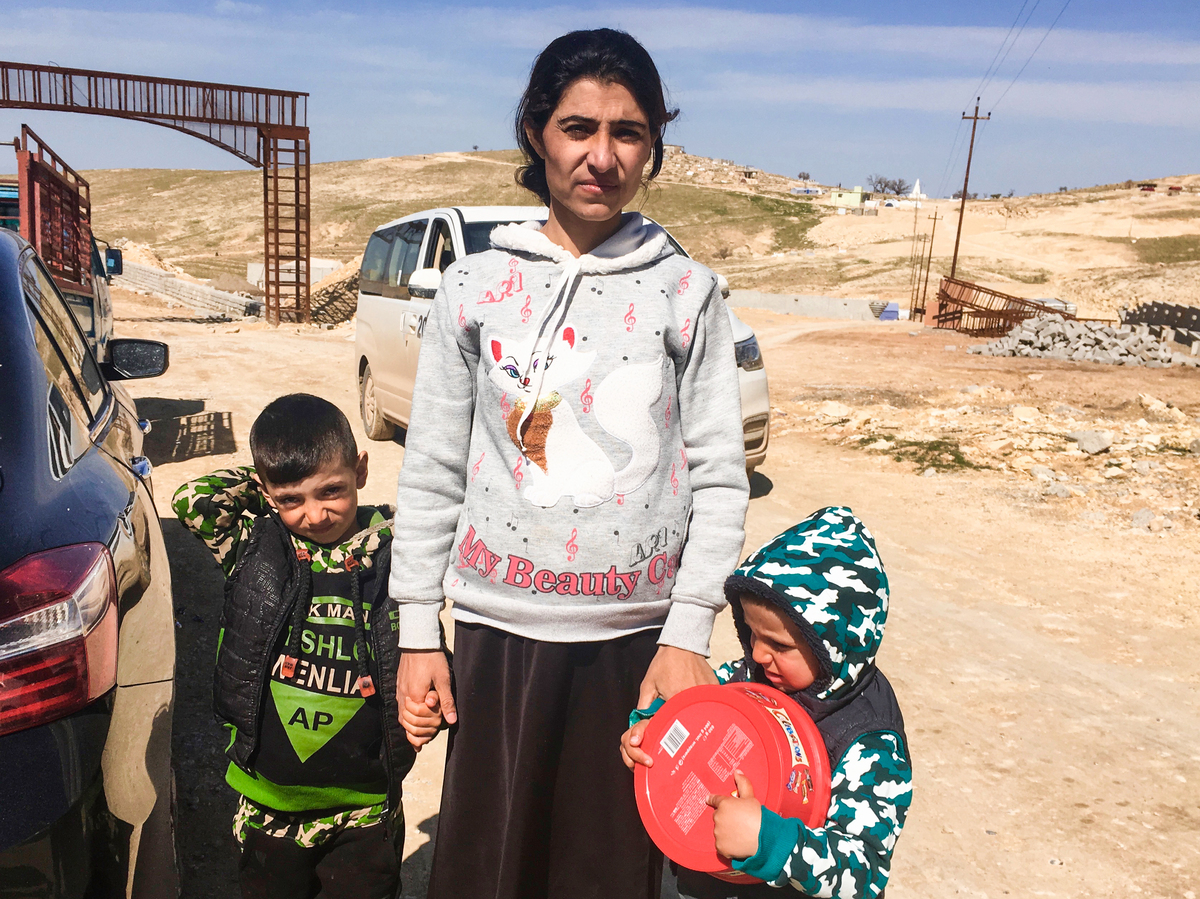 Berfe Khalaf with her children Jager (left) and Jan on Mount Sinjar two days after crossing back to Iraq from Syria, where they were held captive by ISIS. Khalaf's husband was executed by ISIS.

With others he has been more successful.

There's a message on his phone from Jolene, who is 10. She says has been freed and will come back from Syria when the border is opened.

Jolene was with a 14-year-old friend whose brothers and sisters had been killed by ISIS and who had been sold repeatedly since she was 10.

"They sold her between fighters — from an Iraqi to a Syrian to a Saudi to a Tunisian," says Hussein. "A 14-year-old girl and there isn't anything they didn't do to her. What kind of life can she have after this?"

At one of the shrines on Mount Sinjar, where Yazidis fled to escape ISIS five years ago, Berfe Khalaf, 26, has come with her two small children after arriving back from Syria two days before.

ISIS executed Khalaf's husband. She was sold as a slave five times and then forced to marry her captor.

Her children, 4 and 5 years old, fuss and cry as she prepares to leave with her brother for one of the camps. The youngest doesn't recognize chocolate.

Of her extended family of 33 people, only three others have survived.

She says she saw girls as young as 7 taken away to be raped and small children pushed by ISIS fighters into flames.

Khalaf says she feels like "a new born baby" being freed. She hopes for harsh punishment for ISIS wives who supported the caliphate, many of them from countries that have resisted taking them back. And even the children.

"I want the women and children to be tortured like we were," she says.

"They used to say we musn't have any mercy towards you as Yaizidis," she says. "The women were worse than ISIS themselves."