Accessibility links
The FAA's Grounding Of The Boeing 737 Max Fleet Means Some Cancellations Some U.S. airlines are scrambling to rebook passengers after the FAA announced it was grounding the Boeing 737 Max fleet. Airlines affected include Southwest, American and United. 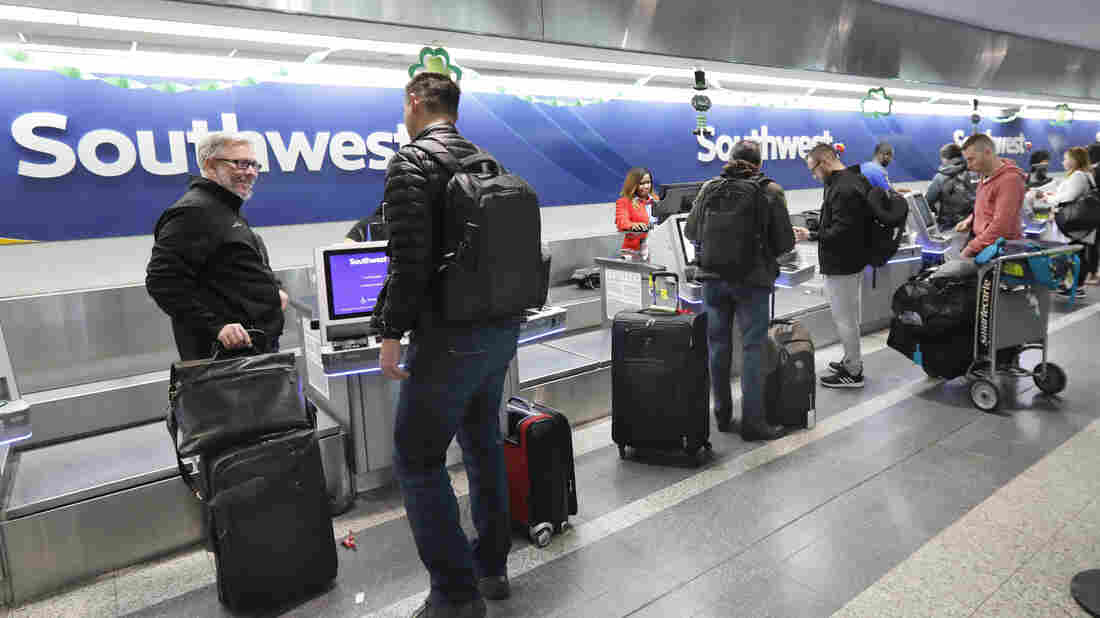 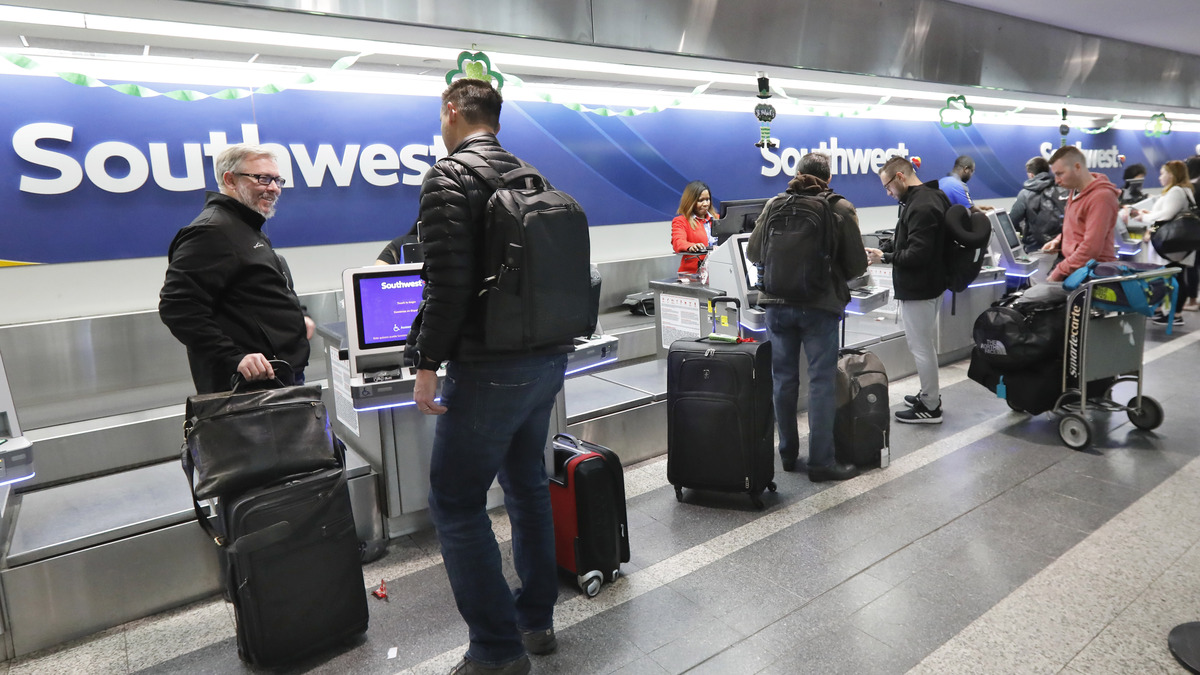 Southwest Airlines passengers check in at New York's LaGuardia Airport. The Federal Aviation Administration on Wednesday issued an emergency order grounding Boeing 737 Max jets in the wake of the crash of an Ethiopian airliner.

Many air travelers are breathing a sigh of relief now that the Federal Aviation Administration has grounded all Boeing 737 Max airplanes after two of the aircraft crashed in recent months, but some airline passengers are finding their flights canceled on Thursday as a result.

The flight-tracking website FlightAware.com shows that more than 2,100 flights nationwide have been canceled for Thursday, but the vast majority of those cancellations are due to the late winter storm moving from the eastern Rockies, through the Great Plains and into the Midwest on Thursday.

The tracking site shows only a handful of flights canceled because they had been scheduled on Boeing 737 Max 8 or Max 9 planes.

An estimated 50,000 travelers could be ticketed on 737 Max planes each day, but those Boeing jets — only 72 — represent a small portion of the overall U.S. passenger airline fleet.

The U.S. airlines that fly the 737 Max planes — Southwest, American and United — will either bring in other planes to fly those routes or rebook passengers on other flights to their destinations.

"I think any disruptions will be very minor," says Paul Hudson of the travelers' advocacy group FlyersRights.org.

Southwest Airlines has the most Max 8 planes — 34 — used on about 160 of the airline's 4,000 daily flights, spread all across the United States. The airline says any customer booked on a canceled Max 8 flight can rebook on alternative flights without any additional fees or fare differences within 14 days of the original date of travel and between the original cities.

United Airlines has 14 of the nearly identical but slightly longer 737 Max 9 planes, which are used on about 40 flights a day. United says it does not anticipate a significant operational impact — it will swap aircraft and automatically rebook passengers.

Air Canada is one of the few North American carriers expecting some problems because of the grounding of 737 Max planes, telling its passengers to expect some difficulties. "Given the magnitude of our 737 Max operations which on average carry nine to twelve thousand customers per day, customers can expect delays in rebooking and in reaching Air Canada call centres and we appreciate our customers' patience," the company said in a statement.

FAA under fire for delay

Air travelers' advocates had been critical of the FAA for not acting quickly to ground the troubled planes. On Monday, Hudson, president of FlyersRights.org, told NPR that he believed the FAA was taking a big risk: "The FAA's wait-and-see attitude risks lives," he said.

Former Transportation Secretary Ray LaHood, of the Obama administration, was among those urging the FAA to ground Boeing's 737 Max planes.

"I think the flying public has questions about whether these planes are safe," LaHood told member station WBEZ in Chicago on Wednesday, before the FAA's announcement. "And the way to really eliminate those concerns is to ground the planes."

Among those welcoming the peace of mind that came with the FAA's decision was traveler Sharon Barnes, who was passing through Seattle-Tacoma International Airport.

"I think it was the right decision, given that the rest of the world is doing the same thing," Barnes told The Associated Press. "And it's a prudent thing to be doing until we know more about what's going on," she said.

Rafael Nendel-Flores was in midair on a flight from Los Angeles to D.C., listening to MSNBC. "That's when I realized the plane I was on was being grounded," said Nendel-Flores. He said he was more concerned about how he would get back home than he was about his safety.

"We're supposed to be on a 737 going back on Friday. That is my oldest daughter's birthday, so I'm like, am I going to miss that?" Nendel-Flores said.

If any travelers are having trouble with an airline over a canceled Boeing 737 Max flight, the travel consumer group FlyersRights.org has the following recommendations:

- Ask for your ticket to be endorsed to be used on another flight or airline going to the same destination.

- Demand an involuntary refund, and book another flight or cancel your air travel.

- Wait for another flight on the same airline and possibly receive hotel, meal and ground-travel vouchers.