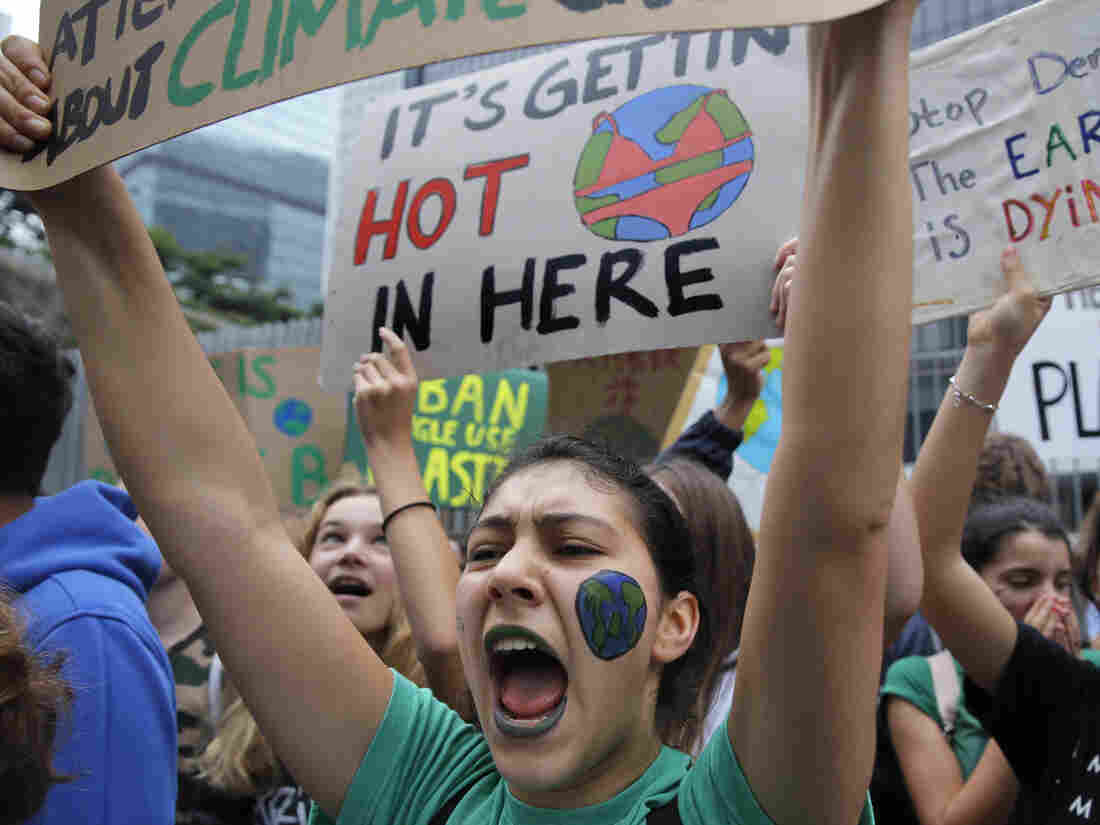 Hundreds of schoolchildren take part in a climate protest in Hong Kong Friday. So-called 'school strikes' were planned in more than 100 countries and territories, including the U.S., to protest governments' failure to act against global warming. Kin Cheung/AP hide caption 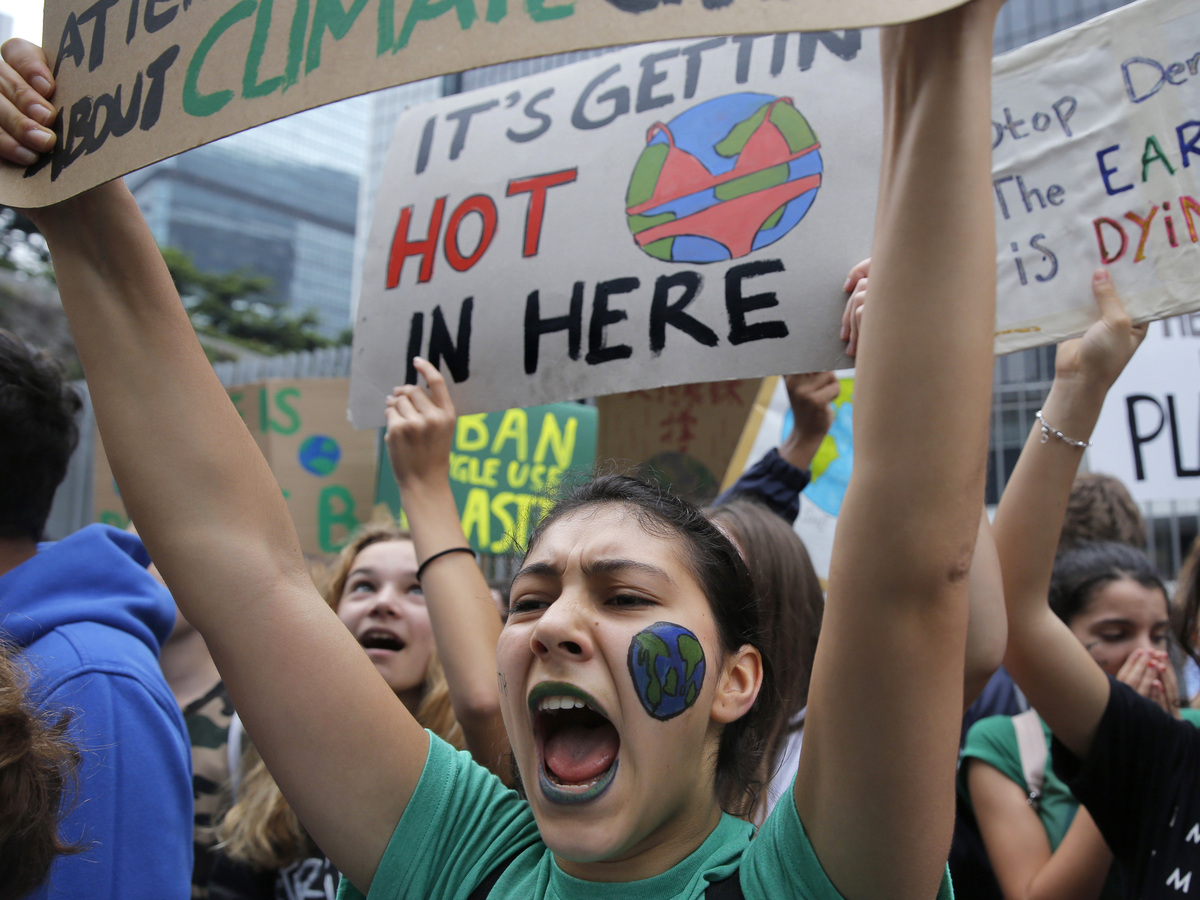 Hundreds of schoolchildren take part in a climate protest in Hong Kong Friday. So-called 'school strikes' were planned in more than 100 countries and territories, including the U.S., to protest governments' failure to act against global warming.

Tens of thousands of students around the world skipped school school Friday to protest inaction on climate change. It was one of the largest turnouts so far in a months long movement that included the U.S. for the first time, in an event organizers call the "U.S. Youth Climate Strike."

The protests began last summer with teenager Greta Thunberg in Sweden, and gained attention when she delivered a powerful speech at the United Nations climate summit in December, chastising delegates for not doing more.

On Friday, Thunberg took part in a rally in Stockholm, where she called climate change an "existential crisis" that's been "ignored for decades by those that have known about it." This week Thunberg was nominated for a Nobel Peace Prize.

Strikes and demonstrations were scheduled in more than 100 countries and territories. There were protests in South Africa, India, New Zealand and South Korea. In Europe, students packed streets in Lisbon, Vienna, Rome, and Copenhagen, among other cities. In London, one banner read, "We're missing lessons to teach you one." In Berlin, students chanted, "We are here, we are loud, because you are stealing our future."

In the U.S. there were events in nearly every state, and many who turned out saw a generational divide over climate.

"You know, Congress, they're pretty much old people," said 18-year-old Amira Ferjani, a high school senior who joined a rally in Philadelphia. "We're going to be here, our kids are going to be here. We want to leave a good world for them."

Amira Ferjani, a high school senior who joined a protest in Philadelphia

At a rally outside the U.S. Capitol in Washington, D.C., students observed 11 minutes of silence, one for each year that a United Nations report warned the world has left to get global warming under control. The report concluded that is a monumental task that's unlikely to happen without new measures and technologies to remove carbon emissions from the air.

The mass protests comes as public concern about climate change is up in the U.S., apparently driven by more extreme weather events, as well as a series of reports on the increasingly dire consequences of the warming climate. 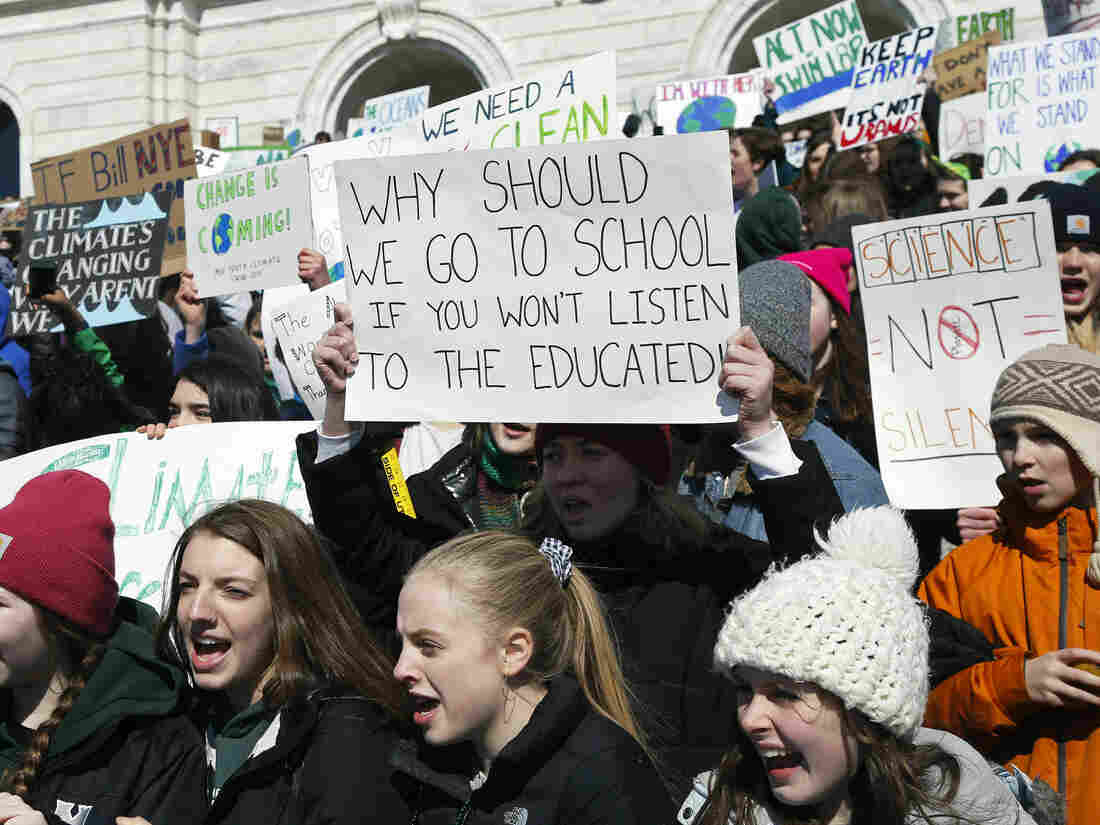 Around 1,000 Minnesota students skipped school to gather on the steps of the state Capitol Friday in St. Paul, Minn. as part of global protests by young people to demand more aggressive action against climate change. Jim Mone/AP hide caption 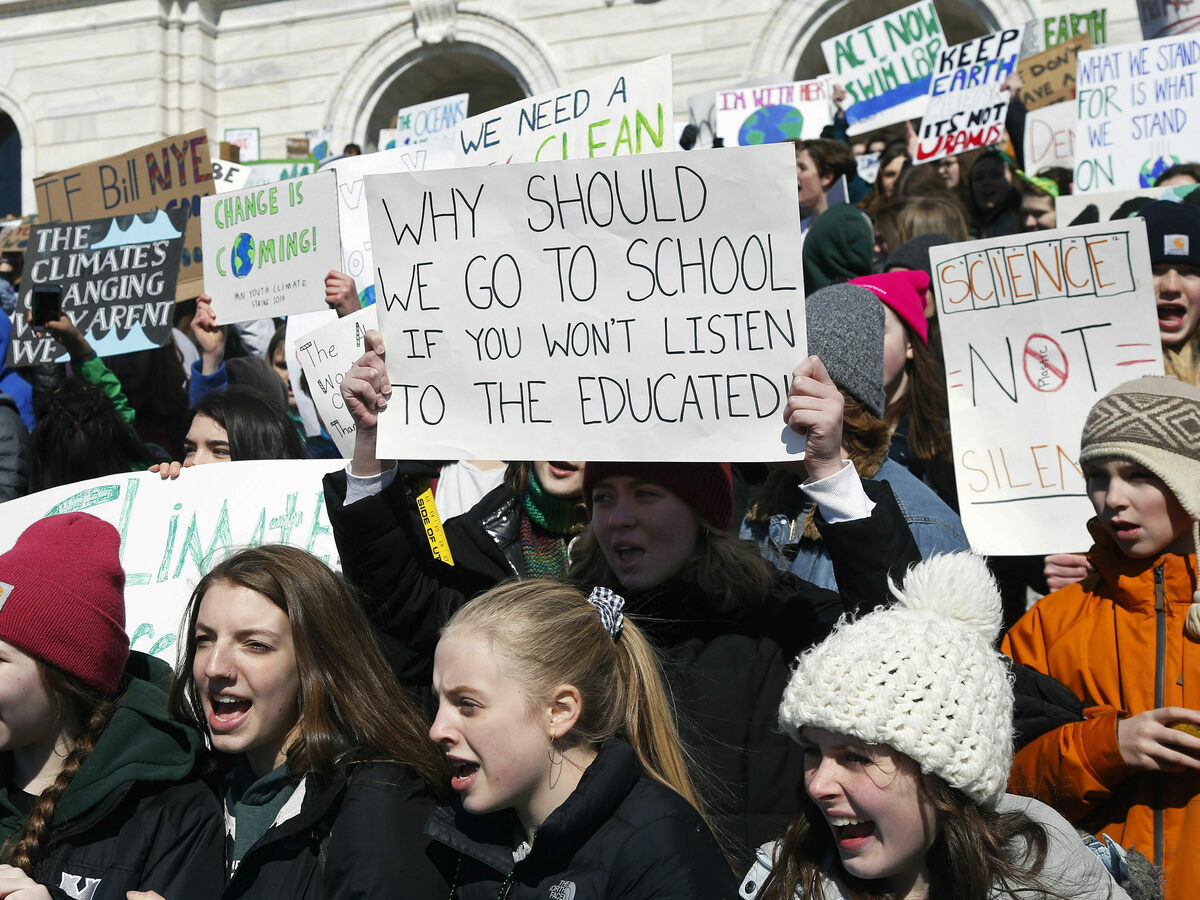 Around 1,000 Minnesota students skipped school to gather on the steps of the state Capitol Friday in St. Paul, Minn. as part of global protests by young people to demand more aggressive action against climate change.

In the U.S., pushing for passage of the Green New Deal

Twelve-year-old Haven Coleman of Denver is a co-founder and co-director of the organization that planned the U.S. school strikes.

"I've always been passionate about fixing something when I see something is wrong," says Coleman, whose environmental activism began with a campaign to help manatees.

Inspired by Greta Thunberg's protest in Sweden, Coleman says she searched for other young activists to organize a similar school strike here. Now she co-directs the project with Alexandria Villaseñor, 13, of New York City, and Isra Hirsi, 16, of Minneapolis, the daughter of recently-elected Democratic U.S. Representative Ilhan Omar.

Their platform includes a call for Congress to pass the Green New Deal, which is aimed at speeding the country's transition to carbon-free energy and re-making the economy to spread wealth more evenly.

A number of Democratic presidential candidates have come out in favor of the non-binding resolution. Washington Gov. Jay Inslee, who says addressing the climate is the core of his campaign, spoke to protesters at New York's Columbia University Friday. Students there waved signs and chanted, "Green New Deal."

But others Democrats, including House Speaker Nancy Pelosi, have downplayed the non-binding resolution as unlikely to be approved by Congress, and unrealistic in its ambitious goal to eliminate the country's carbon footprint by 2030. When Sen. Dianne Feinstein explained her opposition to the Green New Deal to a group of schoolchildren last month, video of the sometimes tense exchange went viral.

Organizer Coleman says Friday's campaign received some help from adults, including The Future Coalition, but much of the planning and preparation was done by young volunteers across the country.

In Philadelphia, 16-year-old Sabirah Mahmud leads a team of about 20 young people who organized the Philadelphia youth climate strike, and a rally in LOVE Park near Philadelphia's city hall.

Mahmud says she has a personal motivation for striking — her family is from Bangladesh, where flooding already is a big problem. "Sea levels are rising and Bangladesh is one of the countries where climate change is really happening," she says. 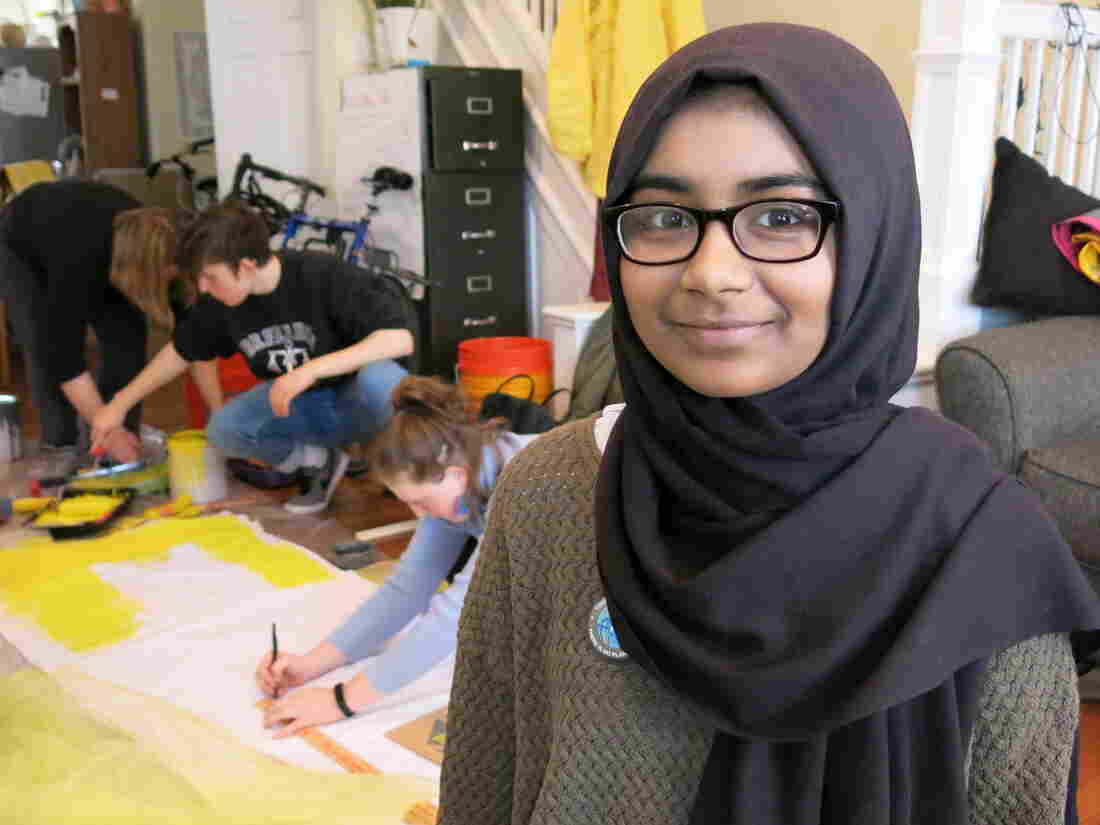 Sabirah Mahmud is a lead organizer in Philadelphia for the U.S. Youth Climate Strike. She says the effects of climate change are personal because her family is from Bangladesh where flooding already is big problem. Jeff Brady/NPR hide caption 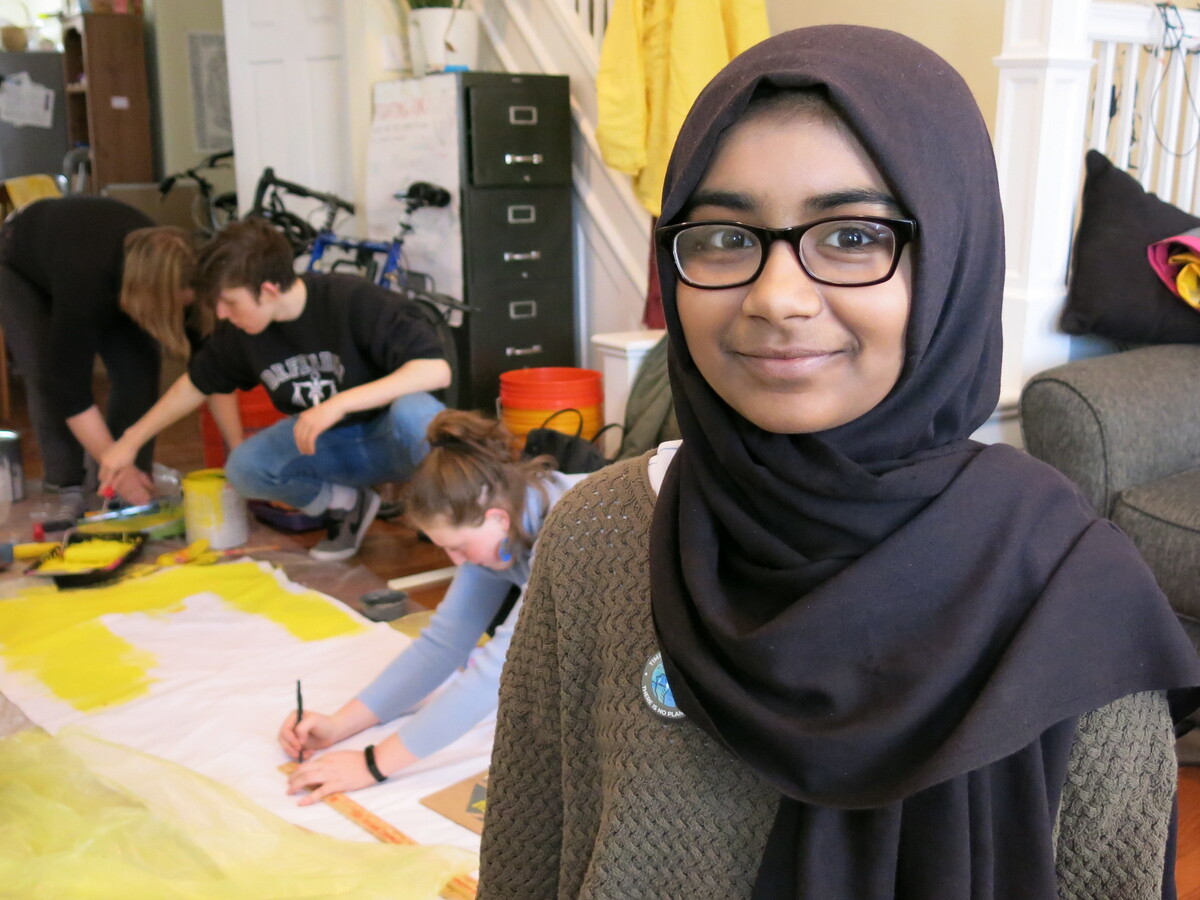 Sabirah Mahmud is a lead organizer in Philadelphia for the U.S. Youth Climate Strike. She says the effects of climate change are personal because her family is from Bangladesh where flooding already is big problem.

Another protest organizer is 16-year-old Enya Xiang of Ardmore, Pennsylvania. She arranged logistics.

"I had to go down into the city to file the permits and figure out all the sound technology we need," says Xiang. "Dealing with adults is a little scary."

And some adults are critical of the Youth Climate Strike, both its goals and methods.

"I do not like the symbolism of sacrificing education to make political points," says Scott Segal, a partner at the law firm Bracewell, which represents energy companies.

British Prime Minister Theresa May has criticized the school strikes for wasting lesson time. Ahead of Friday's events, Australia's education minister, Dan Tehan, said students should protest "after school or on weekends."

Segal says he welcomes these newcomers to the public policy arena. But, just like some moderate Democrats, he argues the Green New Deal is not realistic. And he says energy companies are doing a lot already.

"Industry believes that policy to address global climate change is a 24-hour-a-day, 365-day-a-year job that they're already engaged in," he says.

But Haven Coleman says neither energy companies nor state or national lawmakers are moving fast enough. She says striking school is extreme, and there's a reason for that.

"Because you're not really listening to us now, so this is the radical stuff that we need to do to get your attention," she says.

And if this strike doesn't accomplish that, Coleman says another is planned in May.