Accessibility links
Elizabeth Warren On Big Tech, Trade, Climate Change And Reparations Warren is pushing for the breakup of big tech, citing what she calls an unfair advantage. In an interview with NPR about her core campaign messages, Warren also discussed trade and climate change. 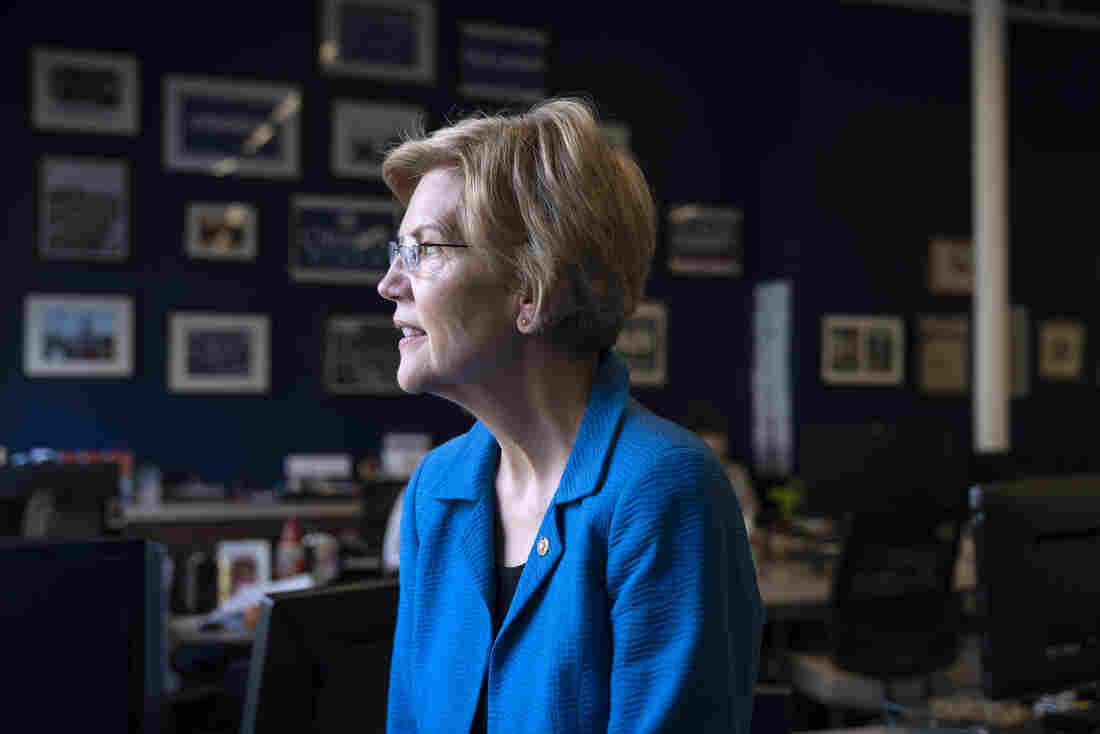 In her bid for the presidency, Sen. Elizabeth Warren, D-Mass., is pushing for a breakup of big tech companies, including Facebook and Amazon. Olivia Sun/NPR hide caption 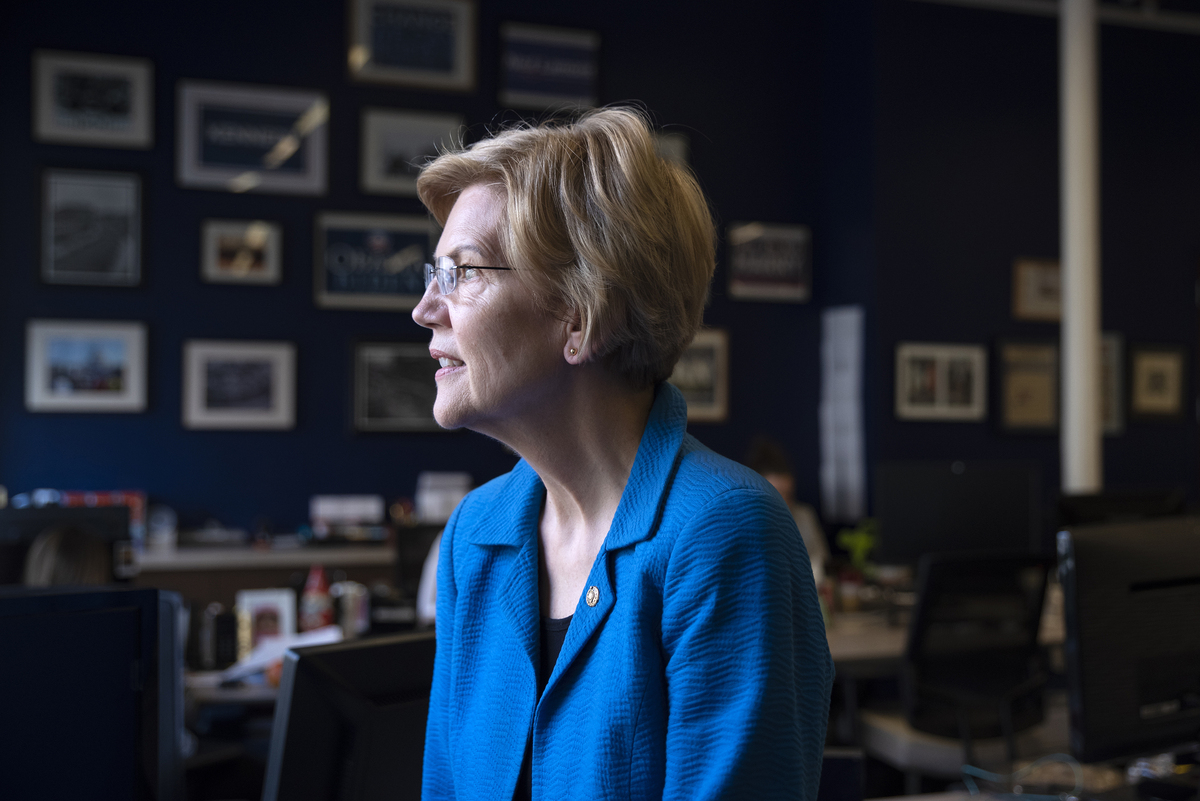 In her bid for the presidency, Sen. Elizabeth Warren, D-Mass., is pushing for a breakup of big tech companies, including Facebook and Amazon.

Massachusetts Sen. Elizabeth Warren has long been known as a consumer advocate and a critic of big corporations. But she's not the only progressive seeking the right to challenge President Trump in 2020 who is highlighting economic inequality.

Vermont Sen. Bernie Sanders, for one, fired up the base with these issues in 2016, after Warren passed on a bid. But this time, she isn't sitting on the sidelines.

In an interview with NPR host Steve Inskeep, Warren discusses how she would hold tech companies accountable and break up what she describes as an unfair competitive advantage. She also touches on her approach to trade, climate change and shares her thoughts on the idea of reparations.

On breaking up tech companies

"Amazon operates this platform. That's cool. I'm for that. But Amazon does a second thing. They suck up information from every single transaction — information about buyer, information about the seller. And they then can use that information to make a decision to enter the marketplace themselves.

"So you're running Pet Pillows, and you're making a nice little business — you had a great idea. Amazon sees how profitable you're becoming. And Amazon says, 'Oh I know what we'll do. We'll become Amazon Pet Pillows.' Put it on that platform. And by the way, move you back to Page 6 and move Amazon Pet Pillows up to Page 1. The consequence of that is that Amazon can and often does destroy the competition on that marketplace and suck up more and more of the value for itself.

In addition to Amazon, Warren has talked about breaking up other big tech companies, such as Google and Facebook (all of which have been NPR funders).

At a rally last week in Long Island City, N.Y. — where Amazon was supposed to build one of its new campuses, but backed out following backlash — Warren compared the behemoth to dystopian novel The Hunger Games. "I'm sick of freeloading billionaires," she said.

Warren has a plan to tax billionaires like Amazon founder Jeff Bezos. Her Ultra-Millionaire Tax would apply to the richest 0.1 percent of Americans, taxing households with a net worth of over $50 million, estimating such a plan could raise $2.75 trillion over a 10-year period.

Inskeep posited that Amazon is an "incredibly efficient service that serves millions of people, [so] what's wrong with [Bezos] having a lot of money?" Warren responded that his wealth wasn't made just by himself, but was a product of the whole American economy and populace.

On trade and relations with China

Warren: [Trump] is right that we have a problem with China. What he hasn't seemed to figure out is what's the strategy to deal with it. So for example, if you wanted to push back against China, your first move would not be to pick a fight with Canada and our other allies. We have a lot of trading partners who are good allies, and we should make sure that ... we are working with our allies. That's what makes us stronger internationally. And many of our allies are just as worried about China as we are. We need to be working with them as we go forward.

Inskeep: President Obama's administration wanted to unite a lot of U.S. allies effectively against China in a trading block with the Trans-Pacific Partnership, which is something that President Trump canceled, and if I'm not mistaken, you oppose.

Inskeep: But this was an arrangement that, according to the [Obama] administration, attempted to set the rules for the world and unite some very powerful countries against China. Isn't there something you want to do?

Warren: I don't think it was an effective way to do that. 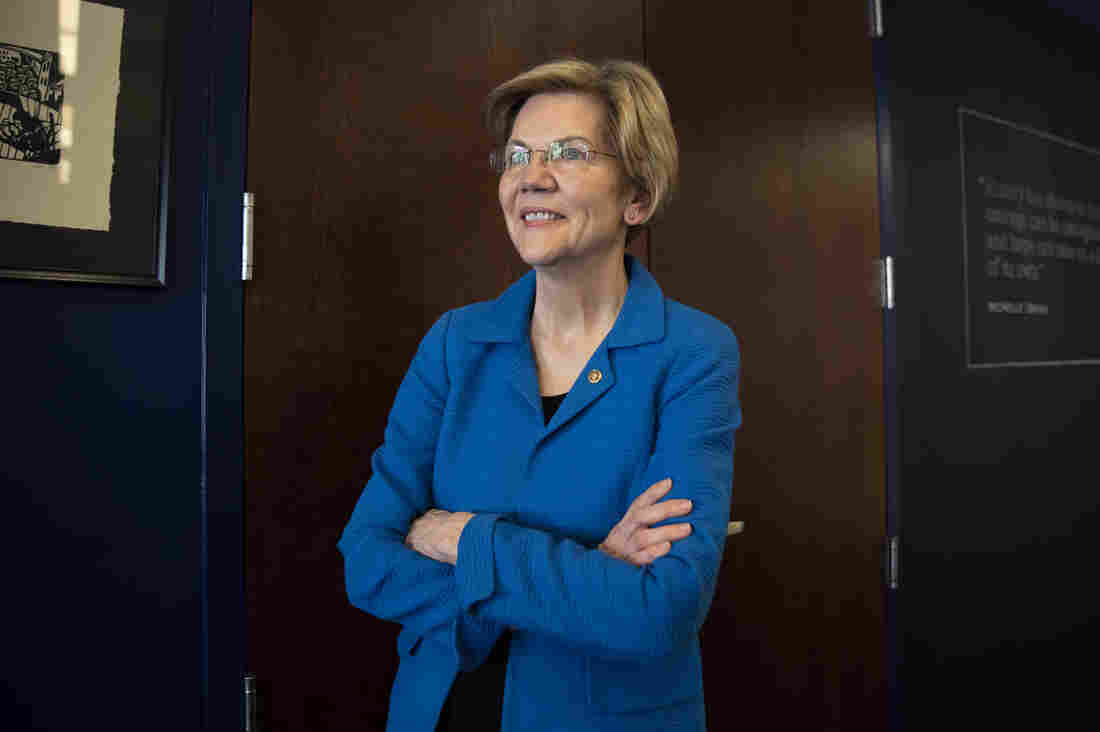 On trade, Warren finds some agreement with President Trump. But she rejects the way he has dealt with trade partners who are "good allies." Olivia Sun/NPR hide caption 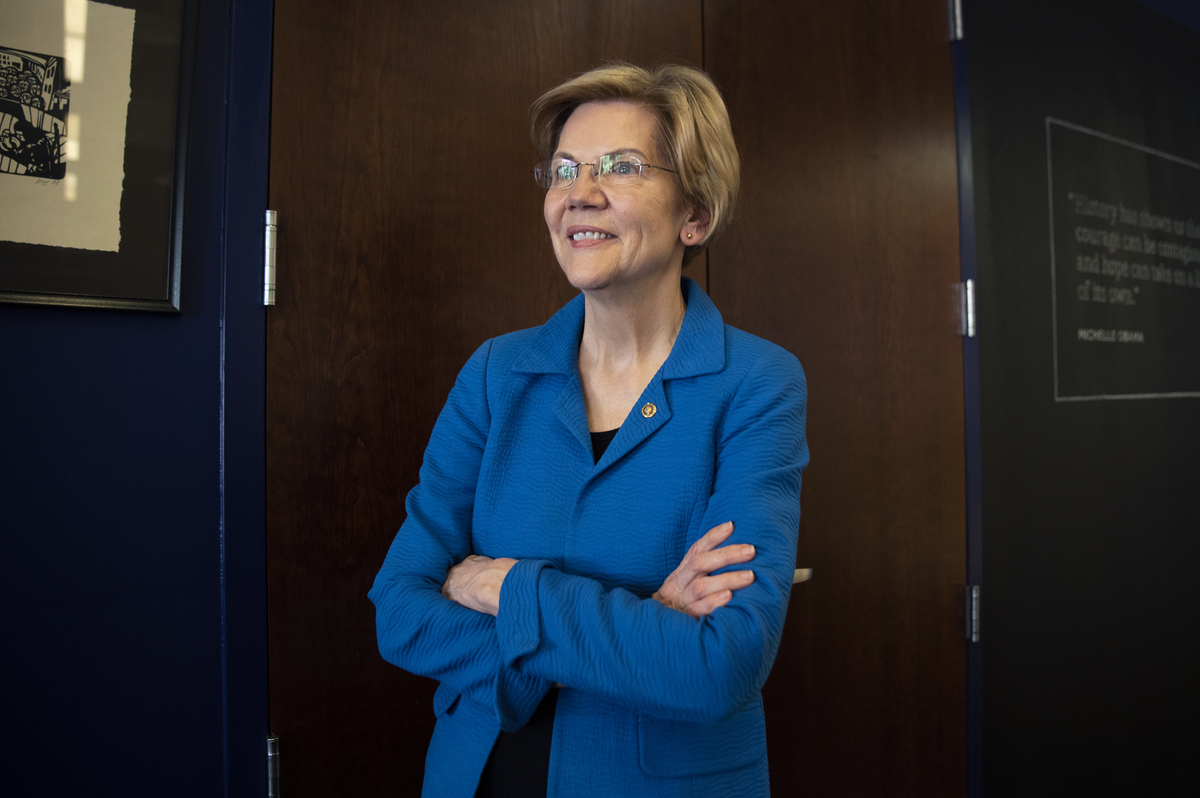 On trade, Warren finds some agreement with President Trump. But she rejects the way he has dealt with trade partners who are "good allies."

Warren's rhetoric on favoring the American worker over multinational corporations has been a refrain of President Trump's — a large part of why he was successful in Rust Belt areas where factories had been hurt by previous free trade deals.

"The whole policy was misdirected. We told ourselves a happy-face story that never fit with the facts," Warren said in April 2018, referring to years of U.S. policy toward China. "Now U.S. policymakers are starting to look more aggressively at pushing China to open up the markets without demanding a hostage price of access to U.S. technology."

"We have to rebuild our infrastructure to deal with climate change that is bearing down upon us. The urgency of the moment on climate change cannot be overstated. It's upon us and we need to make change and make change fast. And that means in part rebuilding our power grids, our entire infrastructure system. We need to harden against the coming storms. Underpasses and overpasses and bridges. We need a 21st-century infrastructure that accounts for coming changes in climate, and we need it fast."

Warren has endorsed the Green New Deal package that aims to drastically cut carbon emissions. Warren said the revenue from her Ultra-Millionaire Tax could help pay for some of these proposals to combat climate change, and it sets her apart as one of the most progressive candidates in the field.

"We have to address the stain of slavery and we need to hit it head on. We need to acknowledge that that is a part of the foundation of how America was built and how this economy was built and that it has had implications generation after generation. There are scholars, there are activists who are talking about many different ways too that we might design a reparations program, but we're not going to ... even start down that path until we acknowledge the initial problem and say we need to get together, we need to have a national conversation about our history and the responsibility that we take for it and how we make change. ...

"Look, we have all benefited from the American economy. I say 'we all' — all the people except African-Americans who didn't get a chance to benefit and that benefit was based in no small part on race. ... Until 1965, it was the law of this country to discriminate against African-Americans and subsidize white Americans. That has effects on everybody in this country even today."

In Her Pitch For President, Sen. Kamala Harris Focuses On Criminal Justice, Inequality

As with many Democratic candidates, Warren has embraced the idea of reparations. As NPR's Danielle Kurtzleben reported, Warren thinks not only African-Americans should be part of the conversation but also Native Americans. The candidates vary in how they define reparations but largely focus on economic inequality. California Sen. Kamala Harris told Inskeep earlier this week that some form of reparations could also be put toward improving health outcomes.

Bo Hamby and Eric McDaniel produced and edited this interview for broadcast.