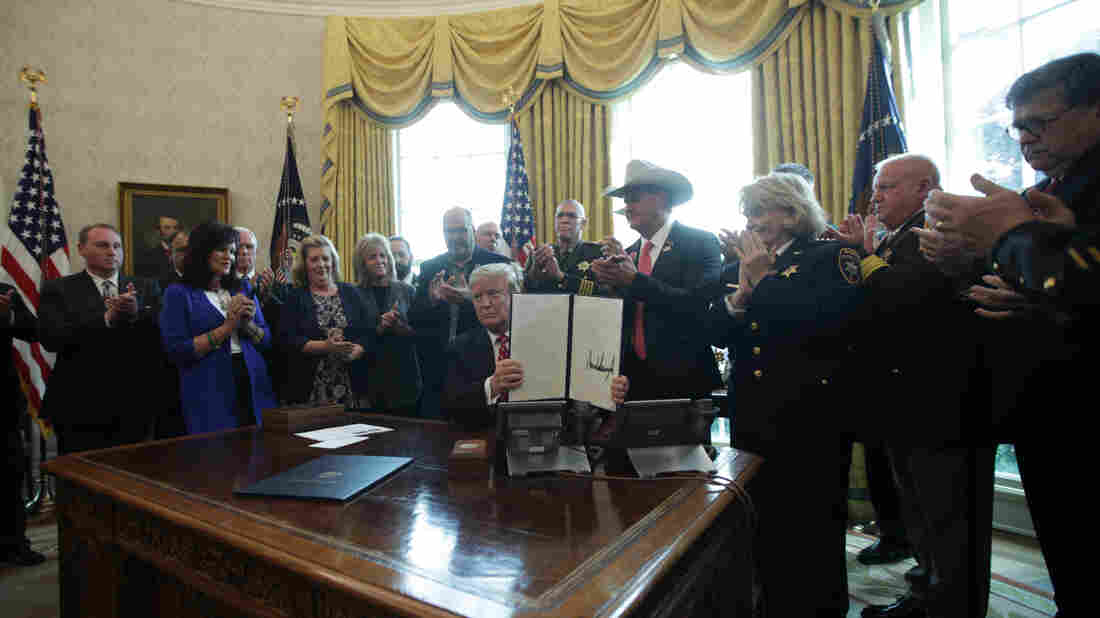 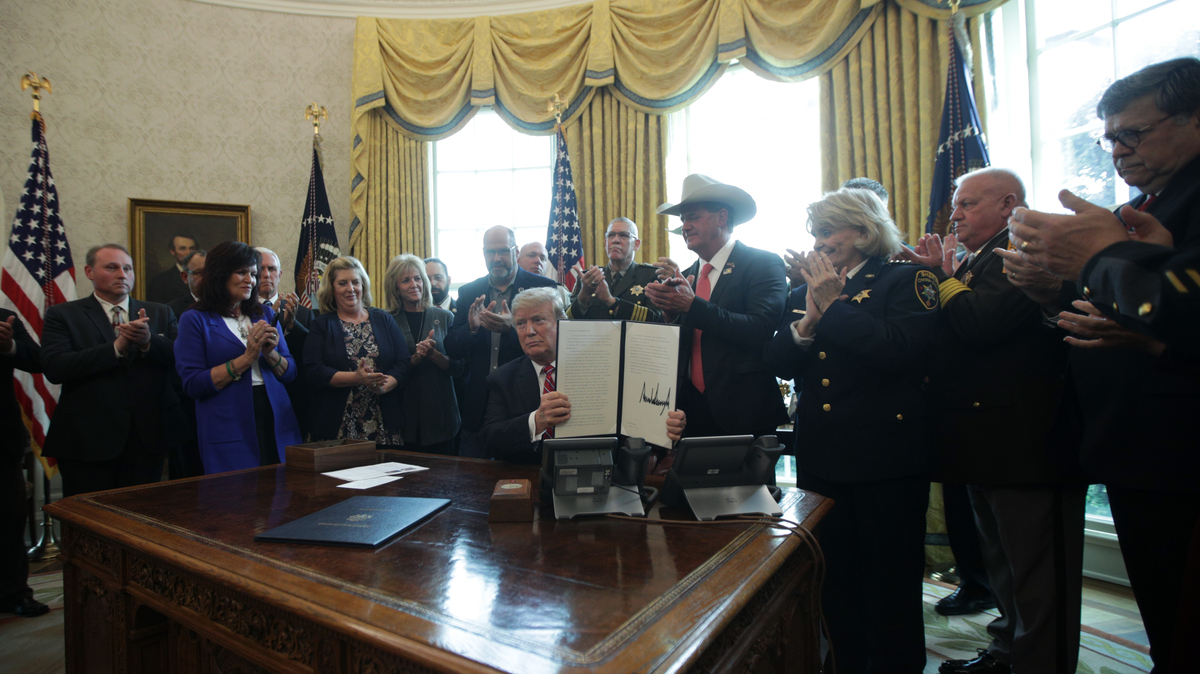 President Trump shows the executive veto of the national emergency resolution in the Oval Office of the White House Friday.

President Trump used his veto pen for the first time Friday, after Congress tried to reverse his national emergency declaration and rein in spending on a wall along the U.S.-Mexico border.

Congressional critics do not appear to have the votes to override Trump's veto. So, as a practical matter, the administration can continue to spend billions of dollars more on border barriers than lawmakers authorized, unless and until the courts intervene.

"Today I am vetoing this resolution," Trump said, flanked by law enforcement officials at an Oval Office event. "Congress has the freedom to pass this resolution and I have the duty to veto it."

Also in the room for the veto signing Friday were parents of children who were killed by immigrants who entered the country illegally, as well as Vice President Mike Pence, DHS Secretary Kirstjen Nielsen and Attorney General William Barr.

"I don't know that I've ever been more proud than to be standing next to you today," Pence said. "You're keeping your word by vetoing this legislation."

Indeed, Trump had telegraphed his plan to proceed with additional wall spending on Thursday, minutes after the Senate voted 59-41 to block it. Twelve Republican senators joined Democrats in rejecting the president's emergency declaration.

"I look forward to VETOING the just passed Democrat inspired Resolution which would OPEN BORDERS while increasing Crime, Drugs, and Trafficking in our Country," Trump tweeted. "I thank all of the Strong Republicans who voted to support Border Security and our desperately needed WALL!"

And Friday afternoon Trump again thanked those GOP senators who had voted to allow his emergency declaration to go forward. "This will help stop Crime, Human Trafficking, and Drugs entering our Country," the president tweeted. "Watch, when you get back to your State, they will LOVE you more than ever before!"

Trump declared a national emergency last month, after Congress authorized only $1.3 billion in border wall funding, far short of the $5.7 billion Trump had asked for. The emergency declaration allows the president to redirect funds from other accounts such as military construction to the Southern border wall.

Republican senators who bucked the president said they did so to preserve congressional control over the government's purse strings.

"We had a war against a king in the American revolution," said Sen. Lamar Alexander, R-Tenn. "This would be the first time that a president has ever asked for a certain amount of money from Congress, Congress has refused to provide it, and then the president has declared a national emergency under the 1976 act and said, 'I'm going to spend the money anyway.'"

Alexander added that he shares the president's goal of border security, but warned allowing Trump to redirect money without authorization could set a dangerous precedent.

House Speaker Nancy Pelosi, D-Calif., announced soon after the veto that the House would attempt to override it, after returning from a recess later this month.

Republicans, Pelosi said, "will have to choose between their partisan hypocrisy and their sacred oath to support and defend the Constitution."

Recent months have seen a surge in unauthorized crossings of the U.S. border with Mexico. Last month, roughly 76,000 people tried, including 43,000 children and family members, many fleeing violence and poverty in Central America.

"People hate the word invasion, but that's what it is," Trump said Friday.

The large numbers have put a strain on immigration enforcement, although critics say a wall would do little to discourage the crossings since many of those apprehended at the border turn themselves in voluntarily.

The border wall project still faces a variety of legal challenges, and despite Trump's veto, House and Senate votes against the emergency declaration could carry some weight in the courts.

"I think actually a national emergency was designed for a specific purpose like this, so we have a great case," Trump said. "Ideally, they shouldn't even sue in this case, if you want to know the truth. They shouldn't even be suing, but they will because they always do."

On Friday, Barr also said the president's emergency order was "clearly authorized under the law."