Accessibility links
Book Review: 'The Bird King,' By G. Willow Wilson G. Willow Wilson's luminous new novel is set during the last days of Muslim Granada, and follows a royal concubine and her mapmaker friend as they flee the Inquisition for a place that may not exist.

Building A Home Of Stories In 'The Bird King'

Building A Home Of Stories In 'The Bird King' 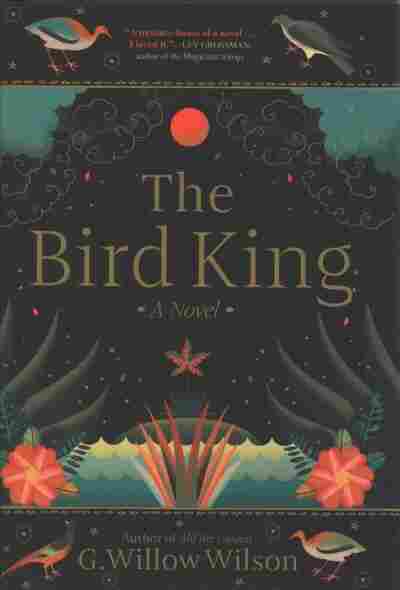 The Bird King is set during the last days of Muslim Granada, and focuses on Fatima, a royal concubine longing for freedom, and Hassan, the royal mapmaker and Fatima's dearest friend. Hassan has a special skill: He can make beautiful, detailed maps of places he hasn't been, and more — he can chart hidden paths that bend reality and fold the distance between a person and their destination. So long as the map exists, so does the path, and the place.

Fatima's bondage and Hassan's queerness allow them into each other's society regularly, and for the most part they lead quiet, unremarkable palace lives punctuated by brief escapes into the places Hassan draws and the stories they make up together, centered around the two precious pages available to them of Farid ud-Din Al Attar's The Conference of Birds. But everything changes when a delegation of Castilian Christians comes to formally obtain the Sultan's surrender to Queen Isabella, and an Inquisitor named Luz takes a special interest in Hassan and his ability. Soon, Fatima and Hassan are on the run, with only a jinn to help them, and a fierce determination to make their way towards the source of their favorite stories: the island of the Bird King.

I loved this book so much. Fatima and Hassan's relationship is such a visceral portrait of the friendships developed under duress, the strength and brittleness of two people who are everything to each other because they have nothing else, the jealousy and pain and uncertainty that come from opening up a hermetically sealed world. Every character is full and rich, whether ally or enemy or something in-between; I especially appreciated how Luz, a female Inquisitor, seems genuinely to love the cultures she seeks to destroy, and how successfully compelling is her horrible fanaticism.

The Bird King is also, to put it mildly, gorgeously written. My copy has doubled in thickness from dog-earing pages I wanted to transcribe portions from or write essays around. I hate that "luminous prose" is such a cliché, because Wilson's sentences are, in fact, full of light, searing mirror-flashes and warm candleflame flickers, dappled twists of heart-breaking insight into empire, war, and religion.

I hate that 'luminous prose' is such a cliché, because Wilson's sentences are, in fact, full of light.

A Breton monk named Gwennec, observing a similarity between some of the stories he knows and Hassan and Fatima's own tales of the Bird King, remarks "These are stories about two different kinds of defeat. Mine is about an empire that was conquered by force. Yours is about an empire that faded away. That's why yours is sadder. There's no real ending." Later, Hassan laments to Fatima, "The Inquisition and the Castilians — they're not just out there, they're in my head. Your head, too. They're inside the only thing that was ever really ours. Even our stories are not our stories. We tried to tell our own, Fa, and all we did was end up telling theirs."

The Bird King is ostensibly the story of a journey, of the limits to escape — but it is also a journey into story, and faith, and refuge, the family we choose and the friends we find. It's deeply beautiful and wondrously sad, and I can't tell if it ended too quickly or if I just needed it not to — if I just wanted to dwell in a home built out of story for a little longer yet.