Accessibility links
Toyota Ramps Up Hydrogen Fuel Cell Vehicles, As Japan Boosts Investment Japan doesn't think battery electric cars are the only future for transportation. It is investing millions to ramp up production of hydrogen fuel cell vehicles, citing their convenience for consumers. 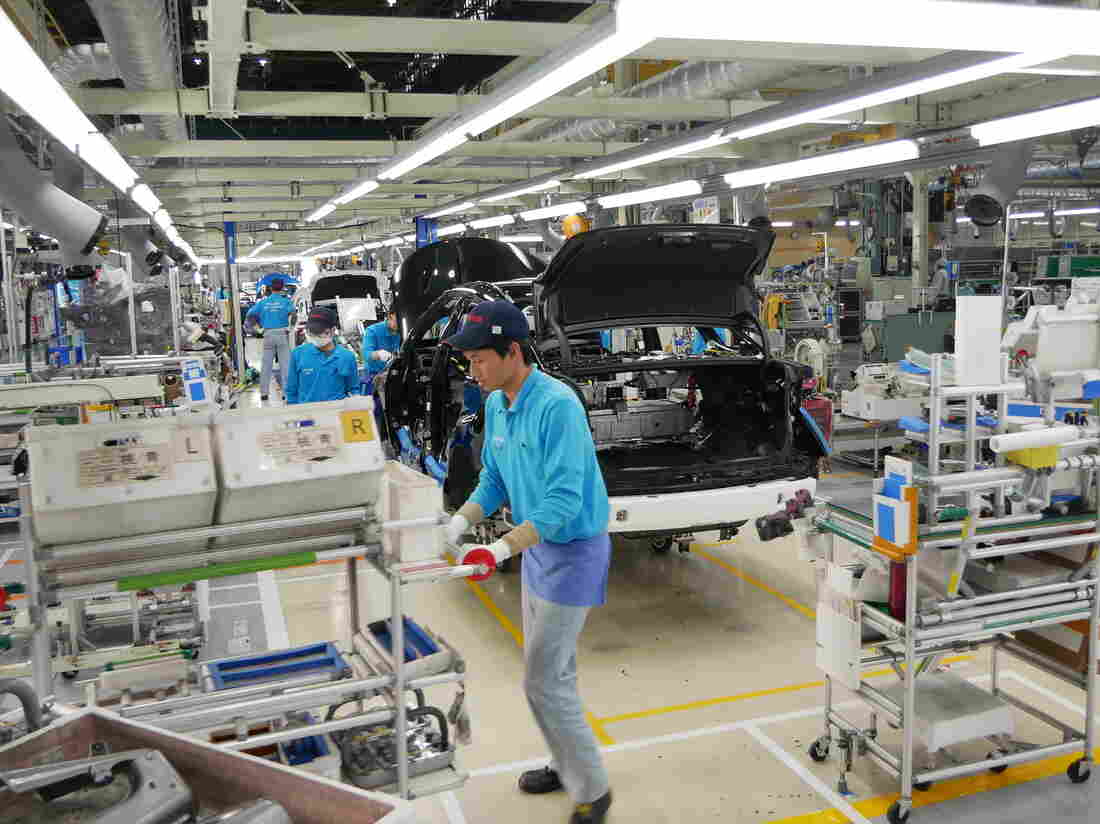 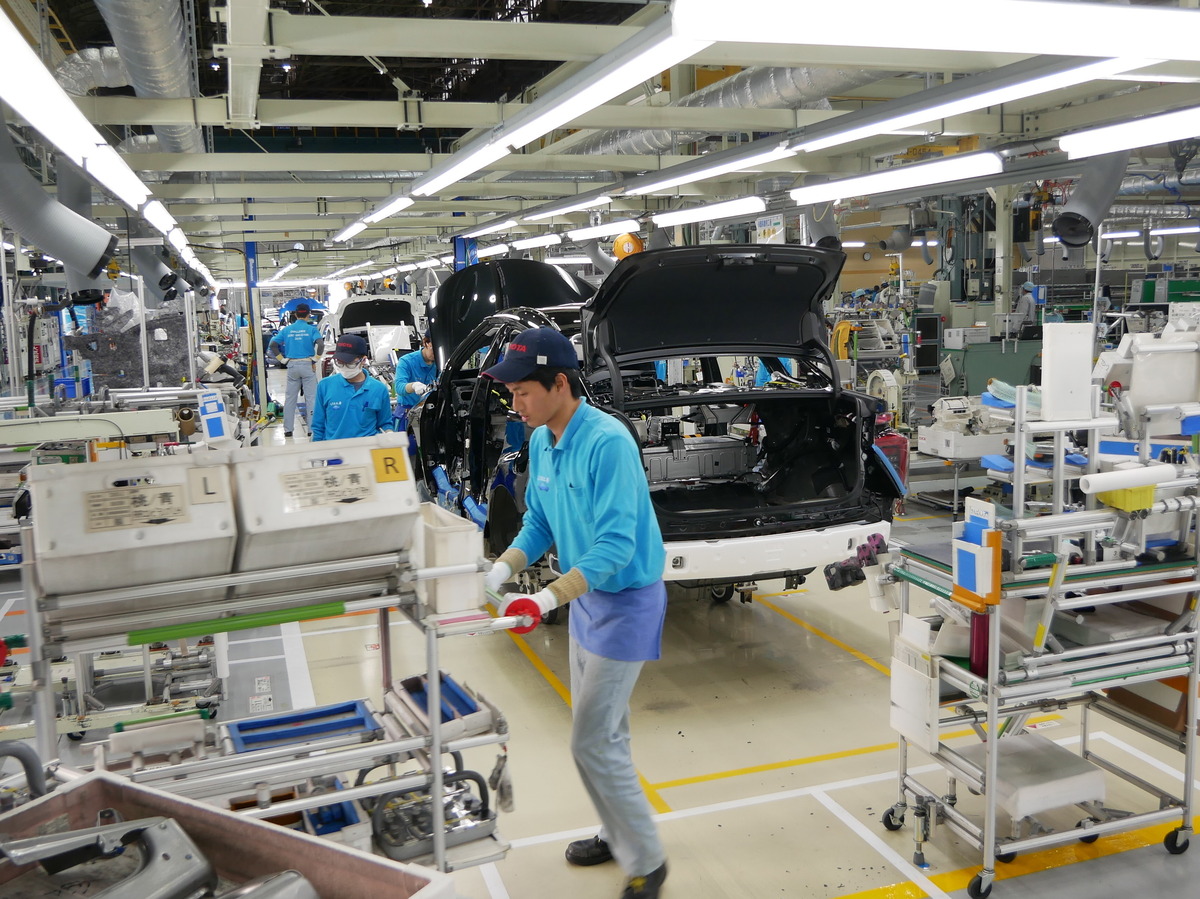 At Toyota's LFA Works plant in Japan, the automaker manufactures 10 Mirai hydrogen fuel cell cars a day. It has plans to ramp up production.

It may feel as though the electric car has been crowned the future of transportation.

Auto companies have plans to make more electric car models, and sales — still only a tiny fraction of the overall market — are expected to get a boost as more countries pass regulations to reduce carbon emissions. But Japan isn't sure that the battery-powered electric car is the only future, and it's betting big on something it says makes more sense in big cities: hydrogen fuel cell vehicles.

A hydrogen fuel cell doesn't burn anything. It uses a chemical reaction between the hydrogen and the oxygen from the air to produce electricity. Hydrogen fuel cell cars are quiet, like battery electric ones, and they emit only water.

At this tiny factory, located inside Toyota's larger Motomachi plant, only about 10 cars are made each day, assembled by hand.

"I love Mirai," says plant manager Matsuo Yoshiyuki, who owns one of the vehicles. "I believe in the future of hydrogen. It's very important for the [environment]."

Only about 11,000 fuel cell vehicles are on the road worldwide. Nearly half of them are in California, which has stringent vehicle emission regulations and tax credits that incentivize electric and fuel cell vehicles.

In Japan, the Mirai is expensive even with a generous government subsidy that brings it down from the equivalent of about $70,000 to about $50,000. The largest cost is the fuel cell production, but Toyota says that will drop as production ramps up.

Japan has embraced the technology and aims to create the first "hydrogen society," which also includes the use of hydrogen for power generation. The energy ministry has ambitious targets in the lead-up to the 2020 Olympics. The city of Tokyo plans to deploy 100 hydrogen fuel cell buses during the games, and it wants to have 40,000 fuel cell electric vehicles on the road, with a longer-term goal of 200,000 such vehicles in the next six years.

Today there are far more battery electric vehicles on the road than hydrogen cars, with more than 5 million plug-in cars worldwide, according to José Pontes, an analyst at EV-Volume.com, a website that tracks the industry. But in countries like Japan, where much of the population lives in dense urban areas, many people live in apartment buildings without a place to easily charge a car. It's here where companies like Toyota are banking on the convenience of the hydrogen fuel cell.

"There's just no behavior change as long as you have [hydrogen] infrastructure in place," says Matthew Klippenstein, co-author of the online publication Fuel Cell Industry Review. "We go to the same gas station and fuel up in the same few minutes and just keep on tootling on."

In South Korea, where the majority of residents also live in urban areas, automaker Hyundai just announced that it plans to produce 700,000 fuel cell cars a year by 2030.

Klippenstein likens the divide between hydrogen fuel cells and battery electric plug-ins to the gasoline and diesel split familiar to American consumers. "We will see a similar split where batteries will, for decades at least, dominate the light duty vehicle passenger cars," he says, "whereas fuel cells will ultimately win out in the heavier applications."

Meanwhile, Japan is investing heavily to create the infrastructure needed to promote hydrogen vehicles. It is tough to sell a hydrogen car without a lot of places to fill it up. But without more cars on the road, such fueling stations are not a smart investment for private companies.

So the Japanese government has stepped in with subsidies. The country, along with private companies like Toyota, has helped build and operate 100 hydrogen fueling stations so far. Japan has a target of 900 by 2030. By then, Toyota hopes there will be enough hydrogen vehicles to make the stations profitable. 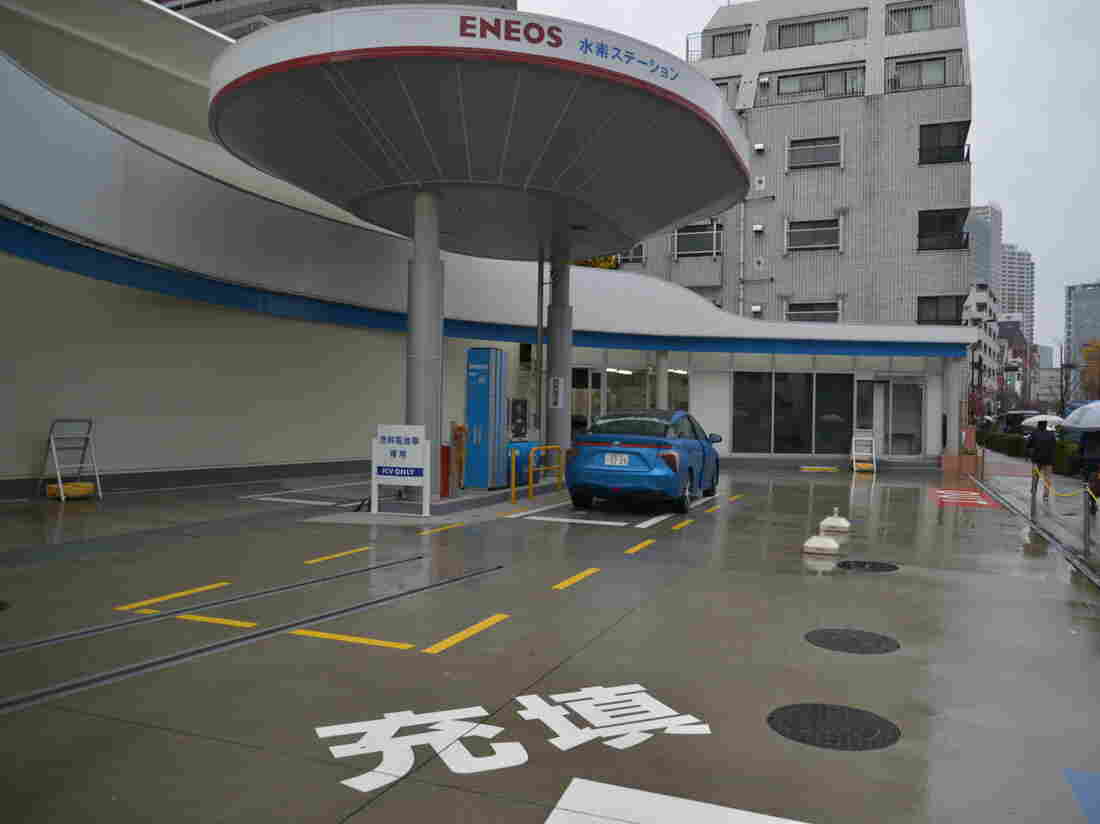 There aren't enough hydrogen fuel cell cars in Tokyo to make fueling stations like this one profitable, so the Japanese government subsidizes them. Hiroo Saso hide caption 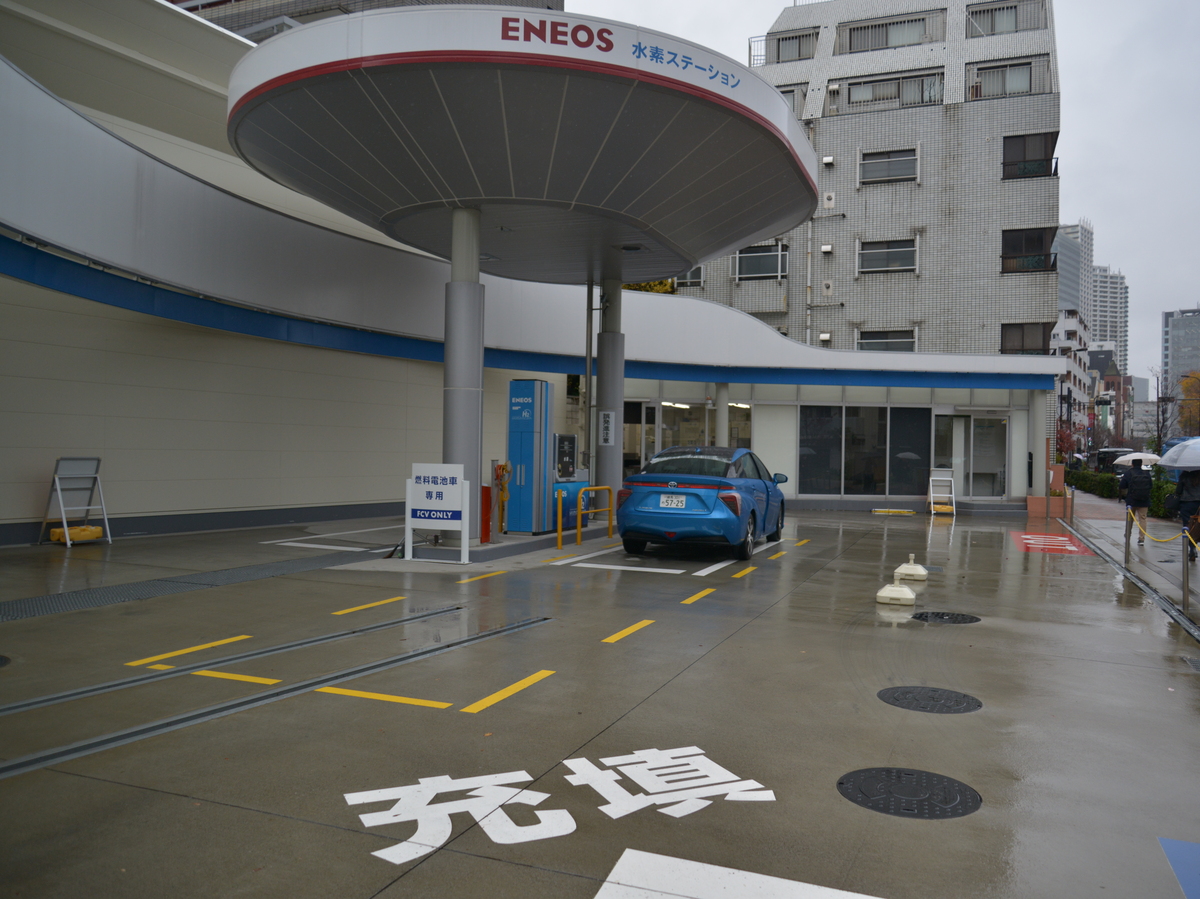 There aren't enough hydrogen fuel cell cars in Tokyo to make fueling stations like this one profitable, so the Japanese government subsidizes them.

Another advantage of hydrogen could be reducing Japan's heavy reliance on Middle East oil. Hydrogen is abundant, and the fuel could be produced anywhere. But producing hydrogen fuel is itself energy intensive, and — just as with battery electric vehicles — it might be produced using natural gas or coal.

"So it's not really clean if that is the case," says Kimiko Haraka of the Kiko Network, a Japanese environmental group.

Haraka is critical of a plan by a number of Japanese companies, including Kawasaki Heavy Industries, J-Power, Iwatani Corp. and Marubeni, to build a plant in Australia that would use lignite coal to produce hydrogen for fuel cell vehicles. She also worries that the many subsidies for hydrogen come at the expense of promoting renewable energy.

Still, Bertel Schmitt, a former car industry advertising executive who lives in Tokyo, says it makes sense for Japan and its automakers to include hydrogen vehicles in their long game plan.

"They pretty much realize that the exhaust regulations will get tougher and tougher," he says. "What is being enacted right now, in 2020 in Europe, is nothing compared to what will come five years later, 10 years later."

For now, though, Schmitt says the internal combustion engine remains the cheapest and most convenient car on the market. Despite massive investment, he says Toyota knows hydrogen won't be taking over the roads anytime soon.

"They know that the guy sitting in the hydrogen fueling station will be very, very lonely for quite a while."

Travel for this story was made possible with help from the International Center for Journalists.