Accessibility links
Road Trip With 'Zora And Langston' In This Real-Life Literary Adventure Squeeze into the rumble seat — Yuval Taylor brings readers along on a 1927 summer road trip taken by Zora Neale Hurston and Langston Hughes. Their friendship turned out to be a very bumpy ride. 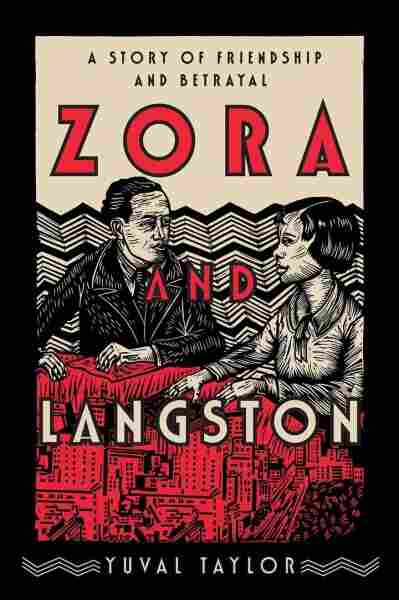 A Story of Friendship and Betrayal

One of the most joyous, true life, "on-the-road" adventures in literary history took place in the summer of 1927. It began in Mobile, Ala., when a young Langston Hughes, who was traveling in the South, stepped off the train from New Orleans and ran smack into Zora Neale Hurston.

The two writers had first met in 1925 in Harlem. On the spur of the moment, Hurston invited Hughes to accompany her on a folklore-gathering expedition. Hughes hopped into Hurston's little two-seater Nash coupe, which she'd nicknamed "Sassy Susie," and off they went, driving through big cities like Montgomery, Ala., and Savannah, Ga., and on dirt roads into the countryside.

They stopped at Tuskegee University, where Hughes visited the renowned scientist George Washington Carver, and raced to Macon, Ga., in time to see Bessie Smith perform. Throughout those weeks on the road, they became best friends, sharing food, money and conversations about art and race. Oh, to have been a passenger, squeezed into the rumble seat of that little car.

Reading Yuval Taylor's new book, Zora and Langston, may be the next best experience. Writing in a vivid anecdotal style, Taylor's book carries readers along on the giddy, and ultimately, very bumpy ride that was Hurston and Hughes' friendship — a friendship that crashed in 1931, when it ran up against the daunting obstacles of jealousy and self-preservation.

Taylor, whose other books include three volumes of African-American slave narratives, has dug up previously unpublished papers and interviews and keeps his focus here tight to help readers grasp the unusual character of this famous literary friendship.

Hurston and Hughes weren't childhood friends, like Harper Lee and Truman Capote; nor did theirs start out as a mentor-mentee relationship, like that of F. Scott Fitzgerald and Ernest Hemingway, who also met in 1925. And their bond doesn't seem to have been sexual, at least not for Hughes.

Instead, for a time, they were simply each other's "person." As Hurston confessed in a 1931 letter to Hughes, "[you are] the nearest person on earth to me." Hughes' response has been lost (as have most of his letters to Hurston), but the evidence of their daily lives together in 1920s New York, where they were comrades in art, struggle and merriment, speaks volumes.

As do Hughes' poems. Taylor quotes a line from one of those poems, "Harlem Night Song," written the year after he met Hurston. It describes two people who "roam the night together/ Singing./ I love you."

The world of roaring '20s New York, and particularly, the man-made wonder that was The Harlem Renaissance, has been chronicled many a time before, but reading about that era never gets old, at least not to me.

Taylor dives in with gusto, describing the delights of 1920s Harlem: the mansions on Strivers' Row and the "octoroon choruses at the Lafayette [Theatre]." His book opens with Hughes and Hurston's first meeting in May 1925 at the ornate Fifth Avenue restaurant, where a glittering and interracial crowd, including Countee Cullen, Paul Robeson and Eugene O'Neill gathered over a dinner of boiled chicken and concealed gin flasks for an awards ceremony sponsored by the National Urban League's magazine, Opportunity.

Hurston and Hughes were the young Turks, artists who, as Taylor describes, celebrated the everyday words and rhythms of African-Africans — a then-controversial strategy that would shape the future direction of African-American literature.

Another thing they shared was poverty: Hughes famously worked as a busboy; Hurston developed a lifelong voracious appetite, explaining to the novelist Fannie Hurst that, "I was hungry for so many years of my life ... I get going nowadays and can't stop."

The fear of falling into destitution led both of them into the arms of Charlotte Osgood Mason, the eccentric and controlling Park Avenue white philanthropist who insisted that both of them call her "Godmother."

Mason ardently supported what was then called the "New Negro Renaissance," believing that black folk were less tainted by civilization. She told Hughes, for instance, that he was "a golden star in the Firmament of Primitive Peoples."

It was Mason's eventual rift with Hughes, along with Hurston and Hughes' argument over the rights to their collaborative play, Mule Bone, that Taylor says, contributed to the devastating break-up of their relationship. For the last 30 years of their lives, the two were painfully estranged.

But let's not go there. Let's focus, as Taylor so evocatively does, on the blossoming of the great friendship between an aspiring Hurston and Hughes, on the wide road opening up before them and on the gifts they shared with each other and with us.