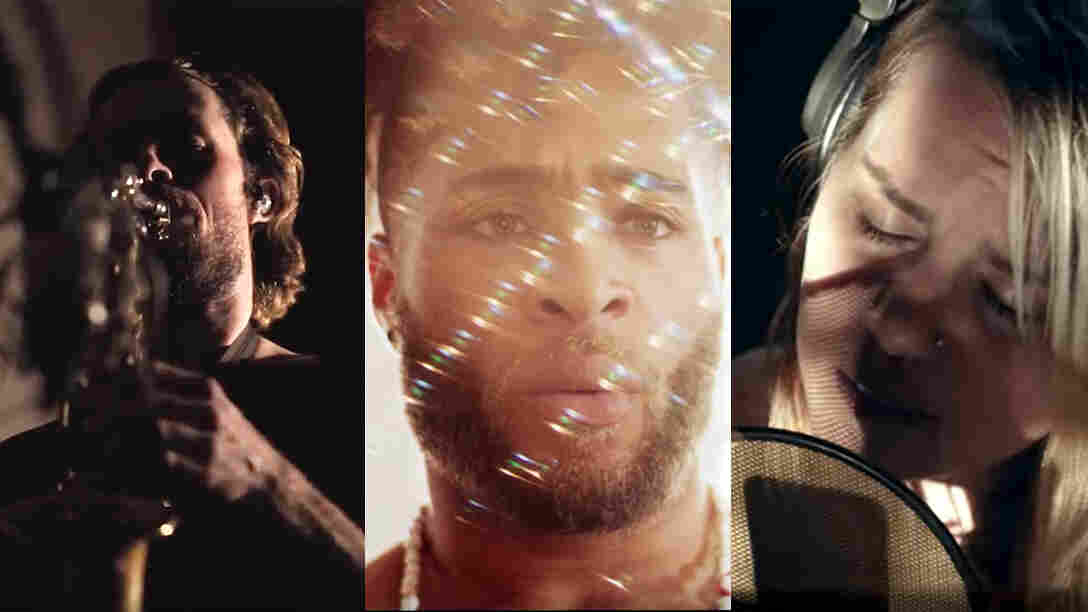 Like any creative community, the Philadelphia music scene is best viewed as a constant state of collaboration.

The artists might take center stage, but they wouldn't be able to do what they do without an equally robust community of directors and videographers to imaginatively translate their work into narrative visuals, or without studios and curators eager to document their process and performances with breathtaking clarity.

For this installment of Slingshot Scenes (as part of NPR Music's Slingshot series), a handful of WXPN hosts highlights ten music videos from the Philadelphia scene that made a formidable impression on them.

When the hip-hop group &More performed at the 2018 XPoNential Music Festival, it had already won the crowd over with its mix of beautiful vocal melodies and thought-provoking raps, but a song called "4Ever 1st Lady" took it to another level. An homage to Former First Lady Michelle Obama, it uses her quote "When they go low, we go high" as its chorus.

As &More prepares to include "4Ever 1st Lady" on its debut album, Ethel Bobcat, the song's music video, made in collaboration with EazyMelow and Murdic, showcases the duo's appreciation of the First Lady's message through a series of vignettes reflecting on black womanhood, and also shows the chemistry &More's Donn T and Chill Moody bring to the stage in footage of them warming up for a show at The Trocadero Theatre. – Helen Leicht

Deadfellow, "In Ten Millennia From Now"

The music video for Deadfellow's gorgeous song "In Ten Millennia From Now" is an altogether engaging take on a tried-and-true video music go-to — the historical and "found" clips format. With airy arrangements and contemplative vocals from Philadelphian Hayden Sammak, the song lends itself to a certain amount of introspection in and of itself, so any visuals that accompany it are bound to strike a different chord with each viewer.

It is the song's dramatic coda, featuring an incredible Pink Floyd-ian sax solo by Deer Tick's Rob Crowell, that the visuals switch from the humanistic to the apocalyptic, with the three-second black screen silently heralding the doom. It's a microcosmic depiction of hope and despair, and "In Ten Millennia From Now" uses what it better than most other videos of its' ilk. – Dan Reed

Ellen Tiberio-Shultz has traveled a stylistic odyssey in a relatively short career as a songwriter-guitarist. Starting out as a folk-influenced teenager from State College, Tibero-Shultz grew into a cerebral composer attending Boston's Berklee School of Music in the 20-teens, and a modern rock-tinged player after a move to Philly and a bit of time in the city's club scene under the Ellen Siberian Tiger banner.

At first listen, you could assume that Great Time's "Lazy Lilly" is just one of the newest in an endless history of break up songs. Once you pair the lyrics "Lilly are you with me? We used to lock our eyes and I still see the yellow part, those green and salted lines, now cracked hearts," with the music video, though, another story is told. A time lapse of an early morning sky gives way to an old house, inhabited by an old man who walks its lonely halls. This meditative slice of a widower's life is worthy of inclusion in a Terrence Malick film. – Kristen Kurtis

Hailing from just across the Benjamin Franklin bridge in Camden, N.J., Kingsely Ibeneche immersed himself in the Philadelphia scene as a dancer, studying ballet at University of the Arts, and accompanying a variety of local musicians onstage. The more time he spent interpreting others' songs through motion, the greater an urge he felt to give his own creative ideas a voice through song.

This year, Ibeneche released Realms on Astro Nautico Records, and it's a dazzling set of dreamlike electronic textures that meditate on love and spiritual connection. While his live show incorporates performance as both a frontperson and dancer, Ibeneche's vision doesn't stop there. The otherworldly "Sanctuary" video, conceptualized by Ibeneche along with director Sidney Kreitzer, finds him desperately racing across naturalistic scenes, from a mystic forest to a cosmic greenhouse, in pursuit of three enchanting muses who become one with him in a pile of earthy clay. – John Vettese

Without the past, there is no future. If there's an overarching theme to the 2018 Rebirth :: Renacer LP by Philadelphia Latin fusion band Interminable, it's that dynamic of time itself. In an uncertain present, understanding where we've come from can inform a better direction as we progress, and that pursuit of forward-movement is given a very literal visual depiction in this video for "Buscando un Futuro" ("Searching for a Future").

Directed by Philadelphia photographer and videographer Koof Ibi Umoren, the scene is set in the lush greenery of Wissahickon Park. Dancer Belle Alvarez plays Past, racing through the underbrush and peeking through branches in search of Future (Sam "TOLVA" Cogdon), a resplendent and hopeful character that remains frustratingly just out of reach. – John Vettese

The mostly-instrumental ensemble Killiam Shakespeare meets in a musical space that brings to mind Frank Zappa-esque guitar jams, sprawling jazz fusion synths, and fat hip-hop influenced beats. The band is a collaboration between keyboardist Corey Bernhard and drummer Steve McKie, two longtime friends who have worked as session players and touring musicians for the Philadelphians Bilal and Jill Scott, as well as Snarky Puppy, John Legend, Ed Sheeran and others.

After watching these guys play, there's no question at all as to why their chops are so in-demand. However, with Killiam Shakespeare, the intergalactic funk fusion is undeniably riveting. Joining them for this performance of "1976 Heron," recorded for a WXPN Key Studio Session in advance of its recent album A Town Called Elsewhere, are guitarists Anthony DeCarlo and Simon Martinez and Aaron Camper on percussion. – Bruce Warren

Comfort often comes in small doses. A hot shower, a fresh orange, a neatly rolled joint by a backyard campfire, a pile of lottery tickets waiting to be scratched. But the joy within those things is fleeting; the shower scalds your neck, the orange peel sticks to your teeth, the high wears off and the fire burns out, the lottery never wins you any money anyway. All these images are compiled into a stunning video for singer-songwriter Rosali's elegant "I Wanna Know" the album opener from 2018's Trouble Anyway.

Directed by Constance Mensh and Kait Privitera, and shot in a vivid series of Philly locales (a weathered platform for the Market-Frankford El, the post-industrial fencelines of Kensington), the impressionistic clip finds the singer-songwriter playing a person in search of peace, and learning to find it within herself. – John Vettese

Boundaries don't exist when it comes to Max Swan's music. The Philadelphia based songwriter refuses to stay in any singular lane. Instead, he'd rather blend them all together. Watch as Swan travels effortlessly between worlds of R&B, jazz, and electronica on this live performance of "155", a song from his album The Fisherman. Recorded at The Back Room in Philadelphia, check out his ability to be a musical multitasker — from his vocal performance to engineering the sampler to the soaring sax solo at the end. Let's just say that when Swan finds a groove, he dives in deep and compels you to do the same. – Mike Vasilikos

You're forgiven if you don't quite know where to look, or what to click, or how to do anything other than listen while the "Onederful" video by Philly rapper Armani White is playing. Life on the internet in 2019 is chaotic at best — How many browser tabs do you have open as you read this? – and this imaginative clip directed by Jared Marston and White himself captures that creeping, constant feeling of sensory overload.

Positioned as a video screengrab that zooms in and out of various corners of White's laptop, it gives you the head-spinning sensation of watching YouTube on YouTube (chew on that for a second) as the titles, captions, and search fields come to life with lyrics. The fray nearly collapses in on itself a couple times, as the digital world often threatens to, but White offers a few components to keep the viewer centered: festival footage from Red Rocks and Made In America, and an undeniable, indelible hook inspired by his 5-year-old niece that goes, "This my type of day, my type of day, my type of day-ay-ay." – John Vettese

For more from this month's Slingshot Scenes, check out the 10 Artists You Should Know From Philadelphia.

All songs are currently available to stream on NPR Music's Slingshot playlist on Spotify and Apple Music.