Accessibility links
D.C. Women Judges Play Central Role In Russia Investigation, Grand Jury Cases Some of the least-known but most important figures in the Russia investigation and its aftermath are the women who preside over its headline-grabbing cases. 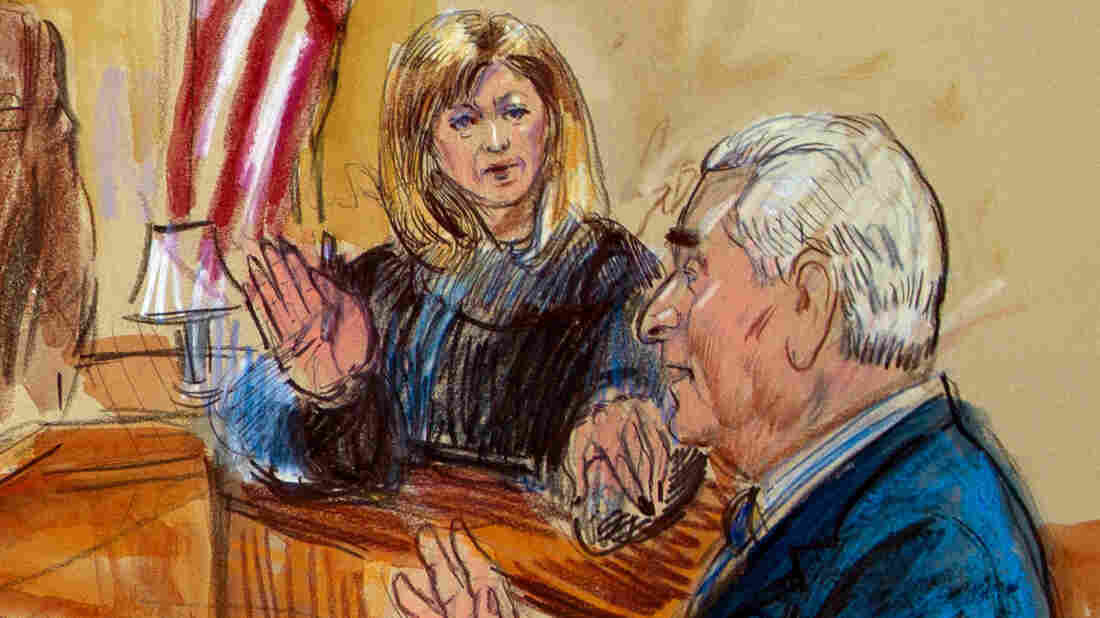 In this sketch, Judge Amy Berman Jackson presides over a court hearing for Trump campaign adviser Roger Stone at the U.S. District Courthouse in Washington, D.C., in February. Jackson is among the women judges playing a central role in the Russia investigation. Dana Verkouteren/AP hide caption 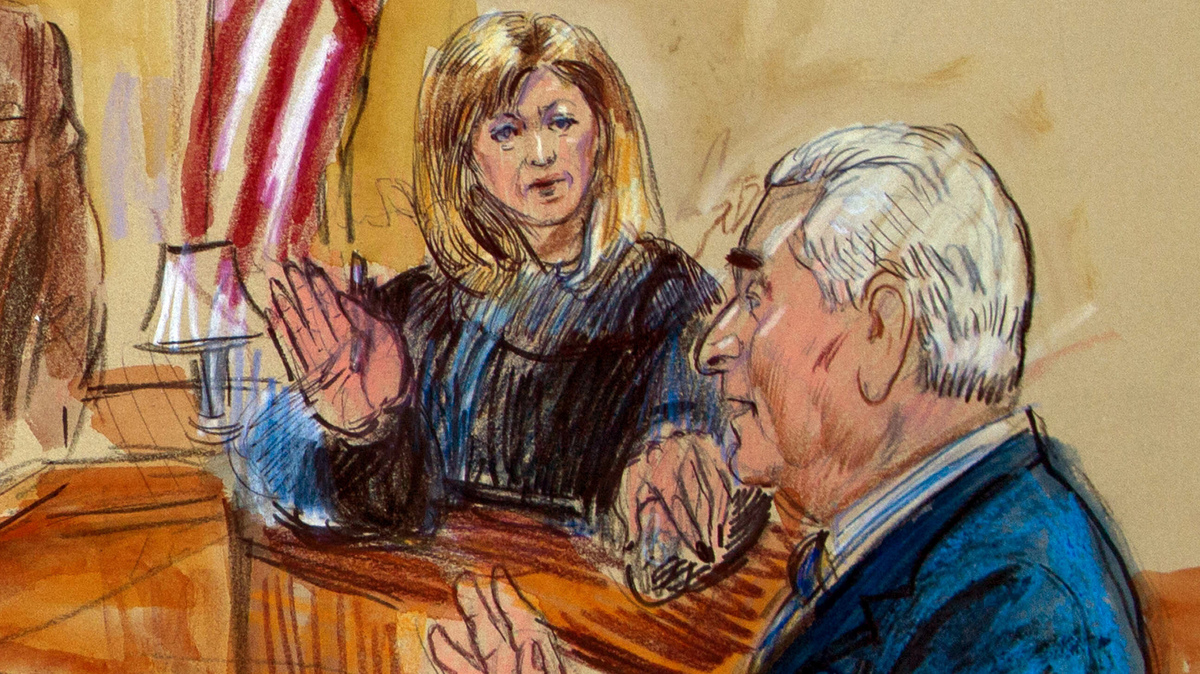 In this sketch, Judge Amy Berman Jackson presides over a court hearing for Trump campaign adviser Roger Stone at the U.S. District Courthouse in Washington, D.C., in February. Jackson is among the women judges playing a central role in the Russia investigation.

Years from now, when people look back on the aftermath of Russia's attack on the 2016 election, a key part of that history will have been written by women.

Most of the federal judges in Washington, D.C. — who have been quietly managing the grand jury process and presiding over arraignments and guilty pleas for nearly two years — happen to be women.

It's a time when Washington's legal establishment worries about lost confidence in the justice system because of partisan attacks, including by President Trump.

So judges appointed by presidents from both political parties, including Trump himself, have largely tried to operate above the fray — winning praise from experts across the political spectrum for their competence and efficiency.

Addy Schmitt, a partner at the Miller and Chevalier law firm who served as a law clerk at the D.C. courthouse, said there's a long tradition of high-profile cases there, from Watergate to today.

"The women on the D.C. federal bench are playing a critical role in these historic events, and it is so exciting to watch," Schmitt said.

The judges "have all handled pressure and adversity to get where they are and that experience is serving them well," she said. "No doubt some will criticize their decisions but it will be hard to criticize their thoughtfulness and integrity."

Another part of that response came last week at an American Bar Association conference in New Orleans. In a panel about the evolving challenge of judging, senior U.S. District Judge Paul Friedman reported this: "Well, I'm in the District of Columbia — not much is happening."

As the crowd roared with laughter, he added: "I am very proud of my colleagues. You come to the courthouse in the morning, and when there are cameras all over the place, you know that Amy Berman Jackson is busy — and others."

Jackson, 64, has become the decider-in-chief for many people following the investigation led by Justice Department special counsel Robert Mueller.

Last week, Jackson sentenced former Trump campaign chairman Paul Manafort on two conspiracy charges. Jackson delivered a blistering rebuke, accusing Manafort of "gaming the system" throughout his entire life and concluding that "court is one of those places where facts still matter."

Jackson's alma mater, the Park School, in Baltimore, was so proud of its alumna that it tweeted words of praise and pointed out she was a 1972 graduate.

"The defendant is not public enemy No. 1, but he is also not a victim either," Judge Amy Berman Jackson said at Paul Manafort's sentencing.

Judge Jackson is a Park School alumna graduating with the Class of 1972. pic.twitter.com/0Fvyj9QlmJ

Jackson's time in the spotlight is far from over.

At some point, the judge will sentence Manafort's former right-hand-man, Trump's former campaign vice chairman Rick Gates, who has pleaded guilty and whose ongoing cooperation with several Justice Department investigations has delayed his day of reckoning.

Jackson, who was nominated in 2010 by then-President Barack Obama, also is overseeing the case against longtime Trump political adviser Roger Stone.

Stone, who has pleaded not guilty to obstruction, witness tampering and false statements charges, has tested the judge's patience — and her gag order — with inflammatory online posts and public comments.

One of his posts targeted Jackson specifically, accusing her of presiding over a "show trial" and including a photo of the judge herself. Images of the previously little-known judge became fare for cable TV news and online news reports. Jackson was not pleased and Stone was forced to apologize profusely in court.

They had another encounter involving a new edition of a book Stone has written about the Russia investigation. Jackson has warned Stone he will not get another chance to comply, putting him at risk of jail. He's scheduled for trial Nov. 5.

"The skill, care and professionalism with which the judges in D.C. have been handling these highly charged cases provide the public with compelling, real-world examples of the critical and positive role played by a nonpartisan and independent judiciary and by the rule of law," said Peter Keisler, a partner at the Sidley Austin law firm who served as acting attorney general under former President George W. Bush. 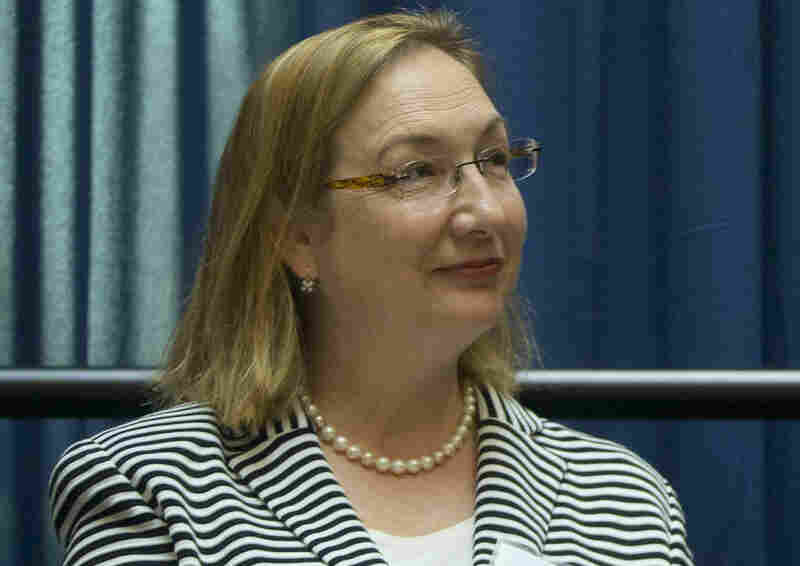 Chief Judge Beryl Howell, pictured in 2016, has overseen the workings of the grand jury impaneled in the Russia case, one that has returned a number of indictments. Pablo Martinez Monsivais/AP hide caption 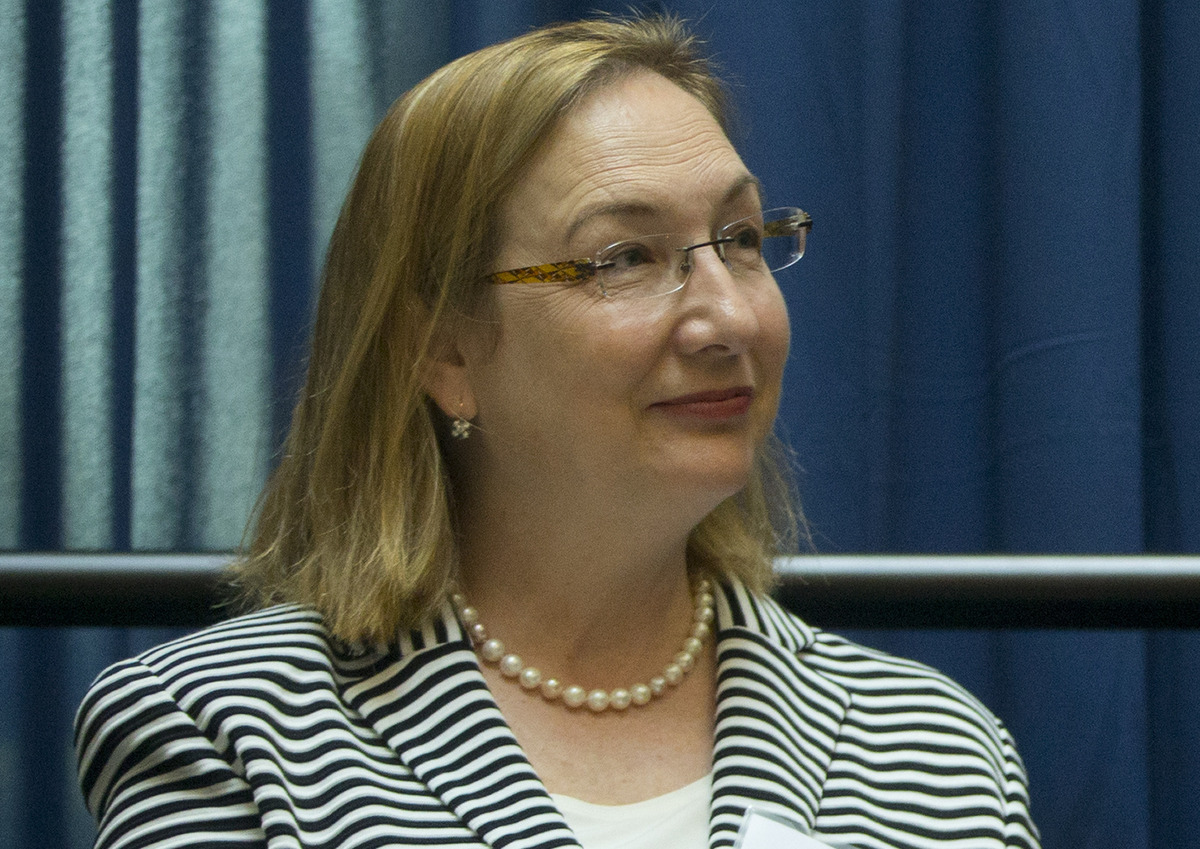 Chief Judge Beryl Howell, pictured in 2016, has overseen the workings of the grand jury impaneled in the Russia case, one that has returned a number of indictments.

If Jackson has become the best-known face of justice in the Russia cases, another woman has been playing an enormously important role behind the scenes.

Beryl Howell, 62, is the chief judge of the U.S. District Court in Washington, where she supervises the secret grand jury that has been hearing evidence from the Mueller team.

That process has been leak-free despite intense interest from the White House and media organizations that on busy days have stationed dozens of producers throughout the building.

"I know she's been working day and night but she isn't telling us what's going on," Judge Friedman told the ABA last week about the chief judge. "She's doing a fabulous job."

Howell also has been deciding a number of critical disputes, in action that's only entered the public sphere weeks if not months after it began. She delivered a scholarly opinion upholding the special counsel's mandate — and has weighed in on a variety of sensitive issues along the way in the investigation.

Applications for search warrants released this week indicate for the first time that it was Howell who approved the government's request to access emails from former Trump fixer and lawyer Michael Cohen nearly two years ago, early on in the probe.

Since then, Howell has ordered a lawyer for Manafort to testify before the grand jury after determining their attorney-client privilege had been pierced because of Manafort's fraud.

"When a person uses the attorney-client relationship to further a criminal scheme, the law is well-established that a claim of attorney-client privilege ... must yield to the grand jury's investigatory needs," she wrote.

Howell also imposed steep fines against a company with foreign links that's fighting one of Mueller's subpoenas. Her decision was upheld by the federal appeals court in Washington, but the company has taken the fight to the U.S. Supreme Court.

In court filings, the mystery company has argued the lower court rulings will "upset American foreign relations and will produce a boomerang effect" on the United States.

Howell spent years as a federal prosecutor in Brooklyn, building cases against international narcotics rings and corrupt public officials. She went on to help draft laws on cyber crime and national security as a top aide to Sen. Patrick Leahy, D-Vt., on the Senate Judiciary Committee.

Howell was named to the bench by Obama in 2010. 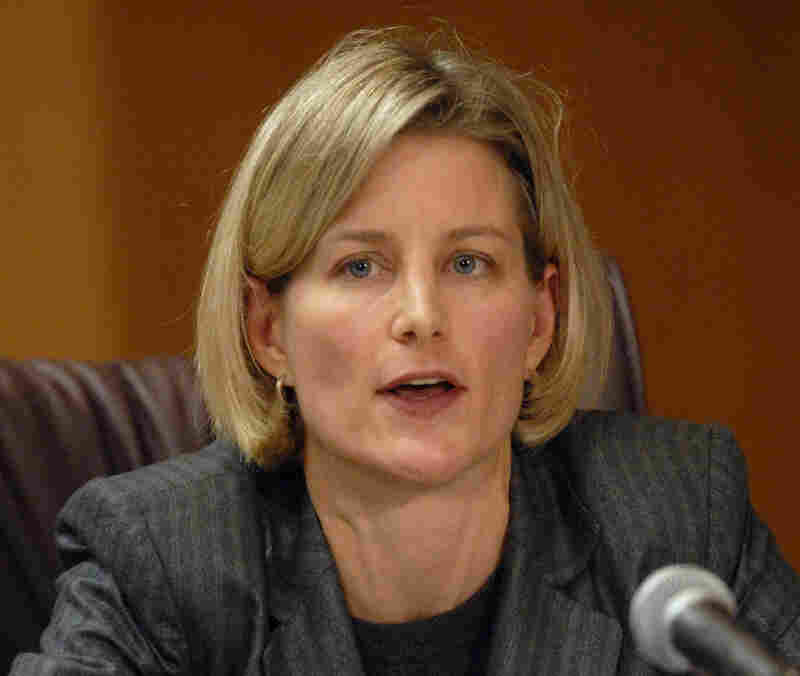 Judge Dabney Friedrich, seen as a member of the U.S. Sentencing Commission in 2007, was nominated by President Trump and oversees one of the Russia cases brought by special counsel Robert Mueller. Stephen J. Boitano/AP hide caption 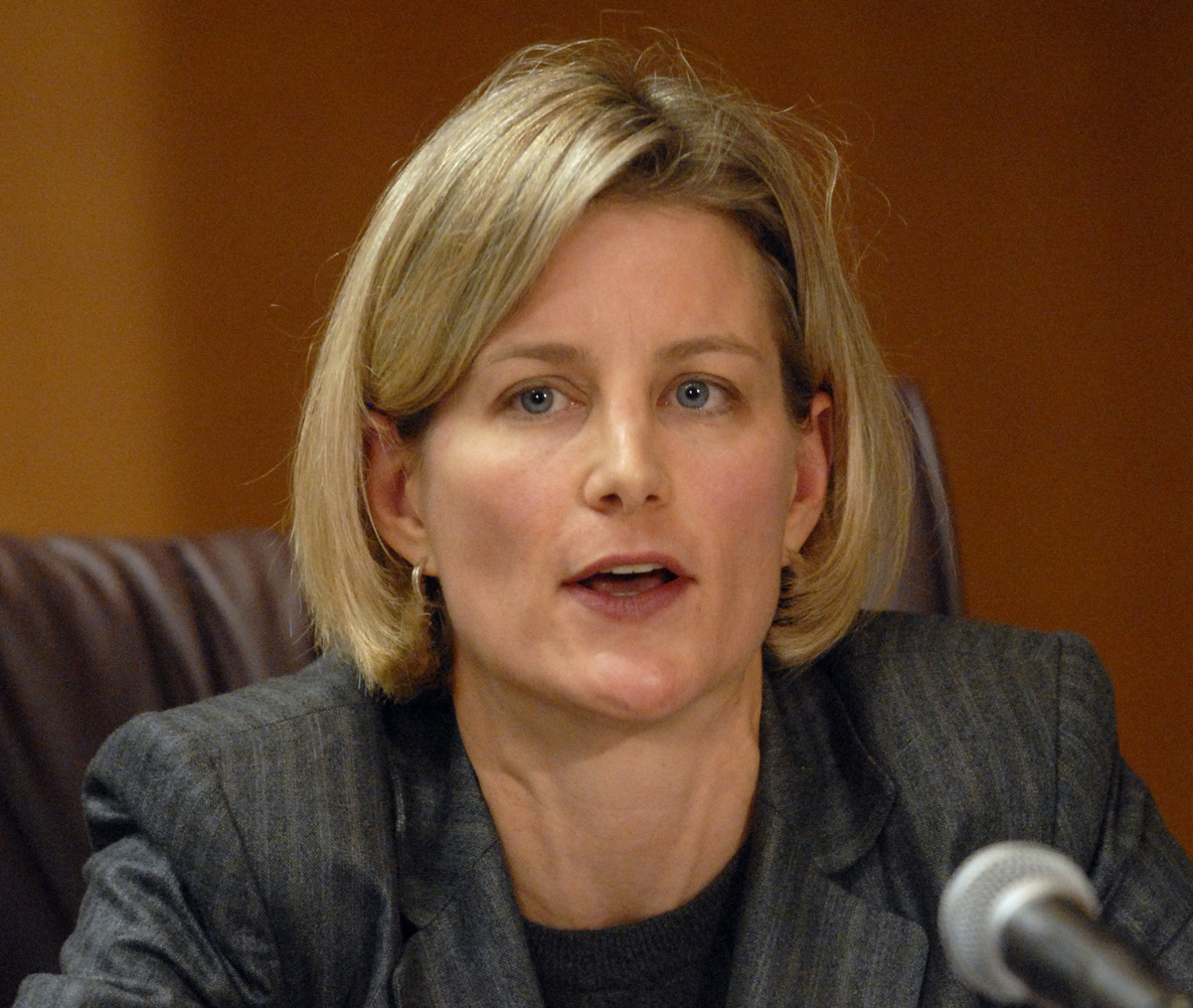 Judge Dabney Friedrich, seen as a member of the U.S. Sentencing Commission in 2007, was nominated by President Trump and oversees one of the Russia cases brought by special counsel Robert Mueller.

One of the newest judges on the bench also has a prominent Russia-related case on her docket. Dabney Friedrich, 51, was nominated to the post by President Trump and confirmed by the Senate in late 2017.

Friedrich is overseeing the special counsel's case against Concord Management and Consulting. The company is owned by Russian businessman Yevgeny Prigozhin, a friend of President Vladimir Putin, and accused of interfering in the 2016 presidential election and of providing support and direction to online trolls at the now-infamous Internet Research Agency.

Earlier this year, Friedrich told a defense lawyer for Concord that his court filings, which referenced the movie "Animal House," cartoon characters and nude selfies, were "unprofessional, inappropriate, and ineffective."

"It's undermining your credibility in this courthouse," Friedrich said. "Knock it off."

One of the more sensational cases on the D.C. court docket involves Russia, but not the Mueller team.

Federal prosecutors in the U.S. Attorney's office and at Justice Department headquarters reached a plea deal with Maria Butina, a Russian woman who infiltrated the National Rifle Association and the National Prayer Breakfast to make connections with Republican power brokers. 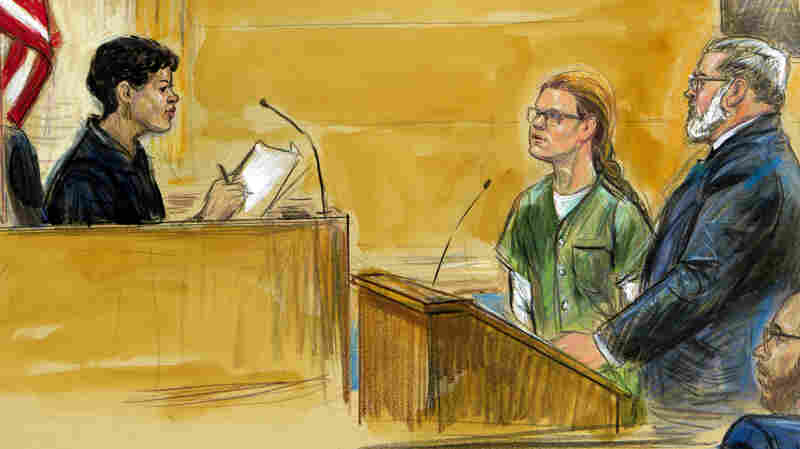 U.S. District Judge Tanya Chutkan was depicted in this sketch during a hearing with Maria Butina (center) and her attorney, Robert Driscoll, in December. Dana Verkouteren/AP hide caption 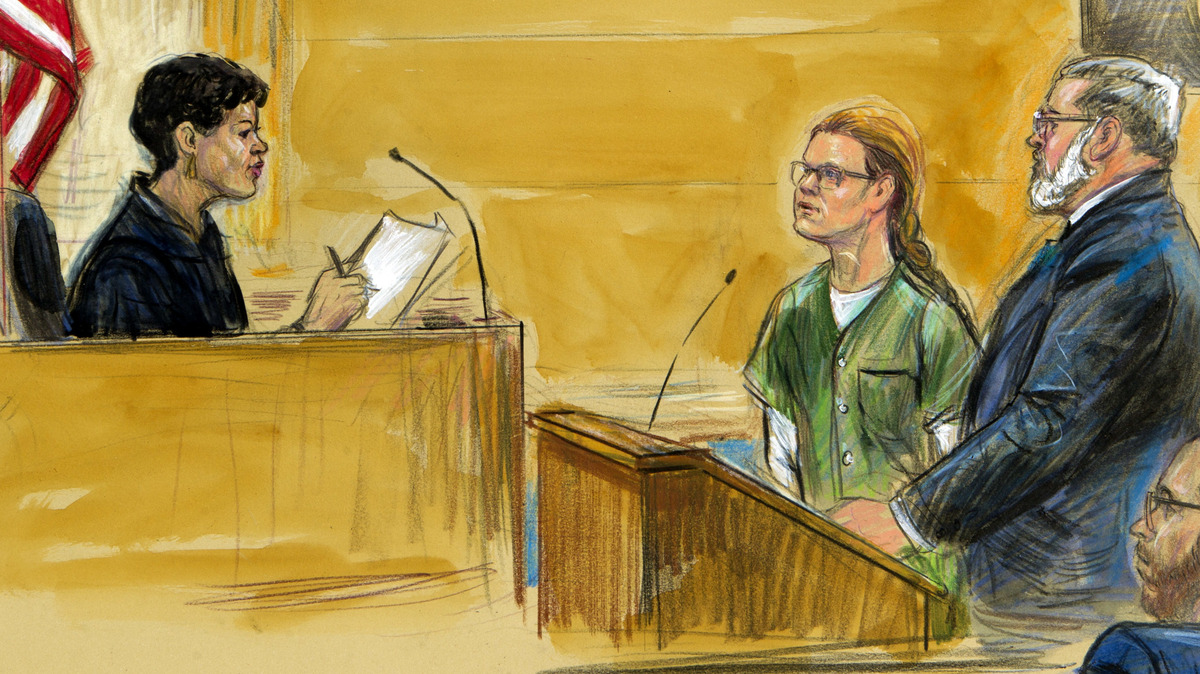 U.S. District Judge Tanya Chutkan was depicted in this sketch during a hearing with Maria Butina (center) and her attorney, Robert Driscoll, in December.

Chutkan has sought to keep tight control of the courtroom, imposing a gag order at one point to stop defense lawyers' media blitz and chastising prosecutors for making false representations about the defendant's sex life.

Chutkan joined the court in 2014, after years in private legal practice and a lengthy stint as a public defender.