Accessibility links
With Climate Change, Avalanche Danger In Colorado Highest Since Records Began Avalanche forecasters in Colorado say it's going to be a bad year. They're predicting the highest danger level for snow slides since they began forecasting in 1973. 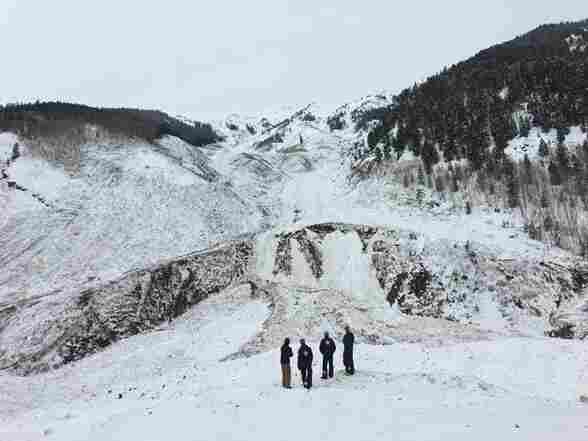 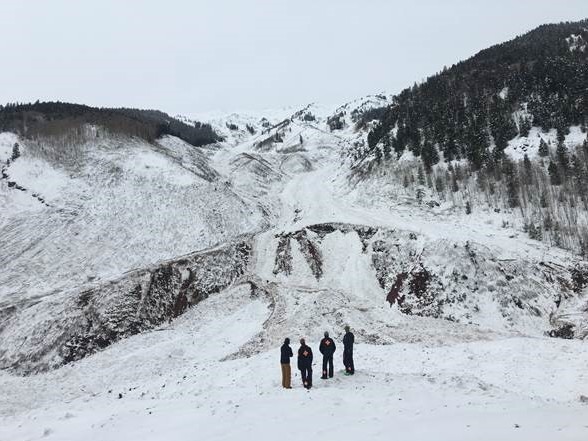 Property manager Zach Paris and members of Aspen Ski Patrol inspect new avalanche runs. This snow slide is one of more than 3,000 avalanches to have taken place this winter in Colorado.

Storms sweeping across the Rocky Mountains this winter have caused the highest avalanche danger since the ratings started in 1973. More than 3,000 avalanches already have taken place in Colorado alone, and they're unusually large.

White River National Forest lies just outside of Aspen. Part of the forest is known as Highlands Ridge.

Old 50-foot, 60-foot, 70-foot trees have been snapped like toothpicks.

The valley below that ridge is now buried because of an avalanche. The snow is deep enough that treetops barely poke out. The trees that aren't buried haven't fared much better.

"Old 50-foot, 60-foot, 70-foot trees have been snapped like toothpicks," says Zachary Paris, property manager for the house at the bottom of two new avalanche paths below the ridge.

A one-mile-long section of Highlands Ridge collapsed under its own weight earlier this month, sending a cascade of snow and debris onto the valley floor below.

⚠️ 🏔️ Avalanche caught on camera: Snow came crashing down in Colorado near I-70 in Ten Mile Canyon outside Copper Mountain this afternoon. | Hear from the man who saw it all and took this video tonight on FOX31. pic.twitter.com/MPk3D9Raxe

The Colorado Avalanche Information Center estimates that the Highlands Ridge slide could be the largest in almost 300 years and that it reached speeds of more than 110 miles per hour.

"We're seeing much more of these large and destructive avalanches," says Brian Lazar, a deputy director of the center.

Avalanches are rated on a scale out of 1 to 5. The Highlands Ridge snow slide was a 4.5. It's just one of the hundreds of record-breaking slides triggered in Colorado's high country so far this year.

We saw more in the first 10 days of March than we'd typically see in a five-year period.

"We saw more in the first 10 days of March than we'd typically see in a five-year period," Lazar says.

His research suggests that, as the climate warms, wet snow avalanches like those he's seeing now could start two to four weeks earlier than normal. That means a longer avalanche season.

"We're certainly starting to see weather patterns which are intimately tied to avalanche activity that is different than what we've seen in past years," Lazar says.

A longer season with warmer weather means an uptick in slides is likely, which makes controlling avalanches in ski areas like Aspen difficult.

Aspen Ski Patrol uses charges — little bombs — to trigger slides in controlled conditions to prevent catastrophic and deadly avalanches. These explosions can be heard from downtown Aspen after a big snow storm.

Aspen Ski Patrol doesn't release specifics about how many blasts it sets off for avalanche control, but it does say it's increased the number of charges this season and spent more time mitigating avalanches.

The patrol is in regular contact with Brian Lazar's team at the Colorado Avalanche Information Center because he gives the patrol the go-ahead to set off these controlled slides.

Avalanche season isn't over. According to Lazar, as temperatures go up, so can avalanche danger

The Beast Born Of Snow: What It Feels Like In The Jaws Of An Avalanche

He says when "things start to melt, we can see a spike in wet avalanche activity."

That means Colorado can expect to see more slides in what has already been a record-breaking season.