Accessibility links
U.S. Airstrikes In Somalia May Amount To War Crimes, Says Rights Group A new report by Amnesty International alleges that the U.S. killed at least 14 people in five different airstrikes in Somalia. The U.S. says it has never killed or injured a civilian. 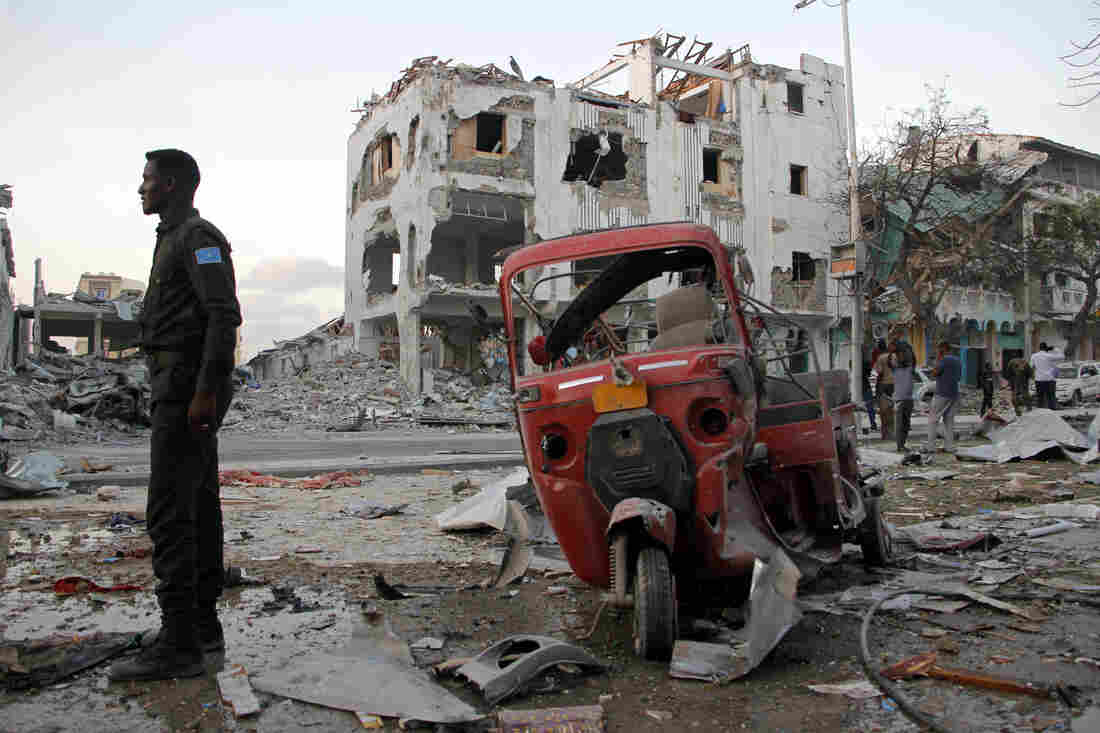 A Somali soldier stands near a destroyed building in Mogadishu, Somalia, on March 1 after police blamed a nearly day-long siege of the Somali capital on al-Shabab extremists. Farah Abdi Warsameh/AP hide caption 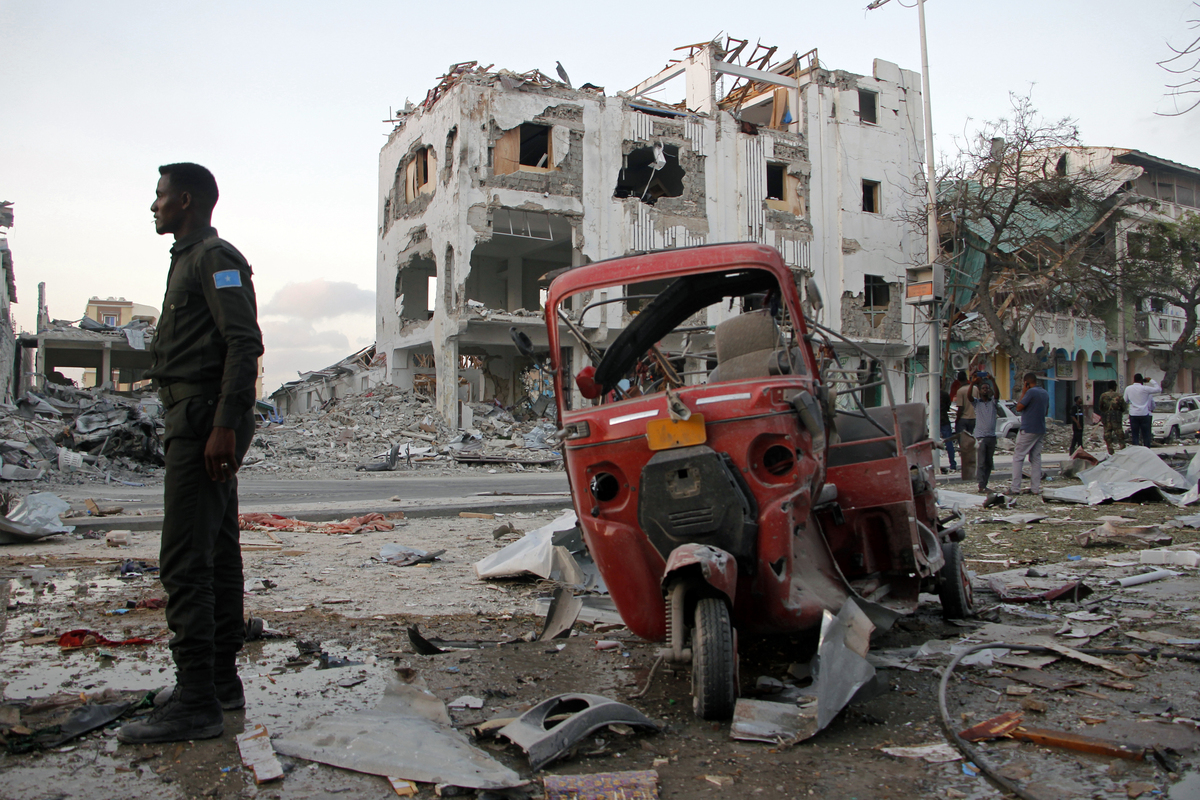 A Somali soldier stands near a destroyed building in Mogadishu, Somalia, on March 1 after police blamed a nearly day-long siege of the Somali capital on al-Shabab extremists.

The United States may have committed war crimes as it bombed al-Shabab militants in Somalia, a new report Amnesty International alleges.

Researchers for the human rights group investigated five U.S. airstrikes and found that they had resulted in 14 civilian deaths. The U.S. has "indiscriminately killed some of these civilians," Abdullahi Hassan, a Nairobi-based researcher for Amnesty, said in an interview.

Hassan says researchers first pinpointed where the strikes had taken place and then tried to find family members, witnesses and medical professionals who had information about who had been killed.

They found that the airstrikes killed farmers, women and an eight-year-old girl, whom the group assessed had no ties to al-Shabab.

"Due to the nature of the attacks, the U.S. government is violating international humanitarian law and these violations may amount to war crimes," Hassan said.

While the United States has been bombing Somalia for more than a decade, the Trump administration has accelerated the attacks. Since he took office, the number of strikes have roughly tripled, according to figures released by United States Africa Command (AFRICOM).

But in a statement responding to the Amnesty International report, AFRICOM says that even though it has conducted more than 100 strikes since June of 2017, it has never killed or injured a single civilian.

"AFRICOM airstrikes are primarily conducted in secluded, low-populated areas," the statement read. "AFRICOM complies with the law of armed conflict and takes all feasible precautions to minimize civilian casualties and other collateral damage. We have processes in place to ensure the safety and protection of the local population remains a top priority."

Over the past year, NPR has requested multiple interviews with AFRICOM to seek clarification on U.S. military action in Somalia. The command has always declined, instead issuing written responses. NPR asked AFRICOM for more details on how they conduct post-strike analysis to determine who is killed in airstrikes. AFRICOM did not respond to questions.

Hassan says that is part of the problem — that the United States is acting with impunity in Somalia. The U.S. acknowledges the airstrikes but won't conduct an on-the-ground investigation of who was killed, he says.

"How will they know? They are just saying they have killed zero civilians but this credible evidence tells them they have to go now back to the drawing board and investigate these credible allegations of civilian casualties," he said.

Amnesty is not the first to raise questions about American airstrikes in Somalia. Last Month, The Nation released an investigative piece that spoke to dozens of Somalis who had been displaced to refugee camps by the airstrikes. The investigation found that AFRICOM didn't make every airstrike public and that their claims of "zero civilian casualties is almost certainly incorrect."

The United States began expanding its use of drone strikes since the terrorist attacks of Sept. 11. One of the big issues raised by human rights groups, academics and some politicians, is the lack of transparency.

The United States, for example, has refused to make public basic details of its so-called "targeted killing" program, including when someone could be considered a terrorist or even the kind of aircraft being used.

In March of last year, human rights groups, including the American Civil Rights Union and Human Rights Watch, penned an open letter lamenting the lack of transparency in U.S. operations in Somalia and Yemen.

"Transparency around the use of lethal force is critical to allowing independent scrutiny of the lawfulness of operations and to providing accountability and redress for victims of violations of international law," the groups wrote. "Transparency also helps governments identify and address civilian harm. It enables the public to be informed about some of the most important policy choices the government makes in its name – ones that involve life and death decisions."