Accessibility links
Google Fined $1.7 Billion By EU Over 'Abusive' Online Ad Strategies For years, AdSense contracts gave Google a wide range of control, including how its rivals' search ads would appear — and their size, color and font, the EU says. 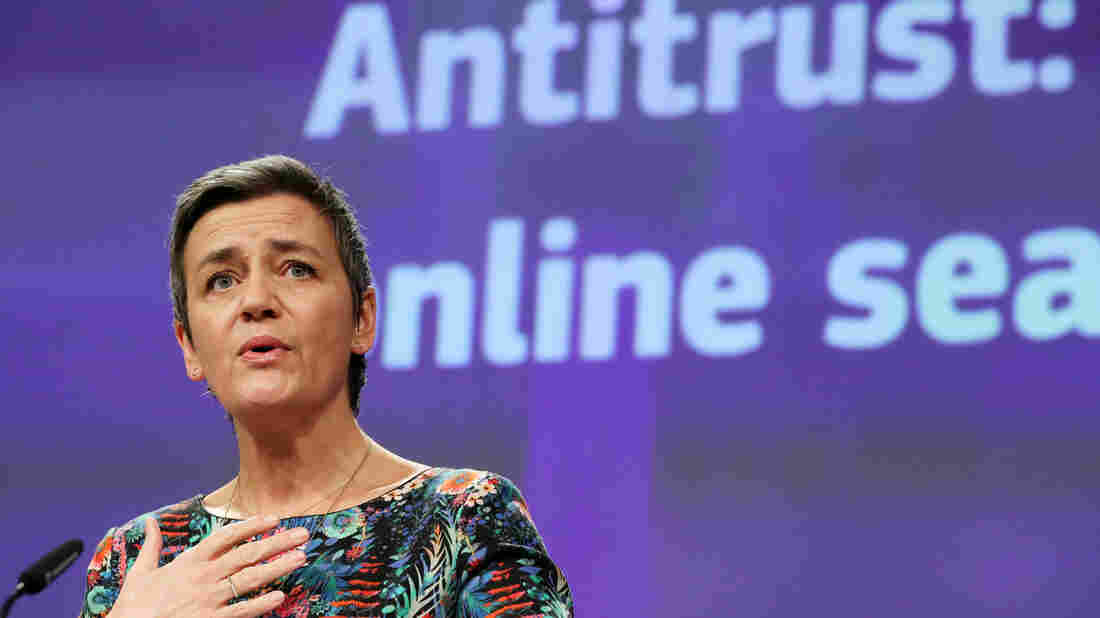 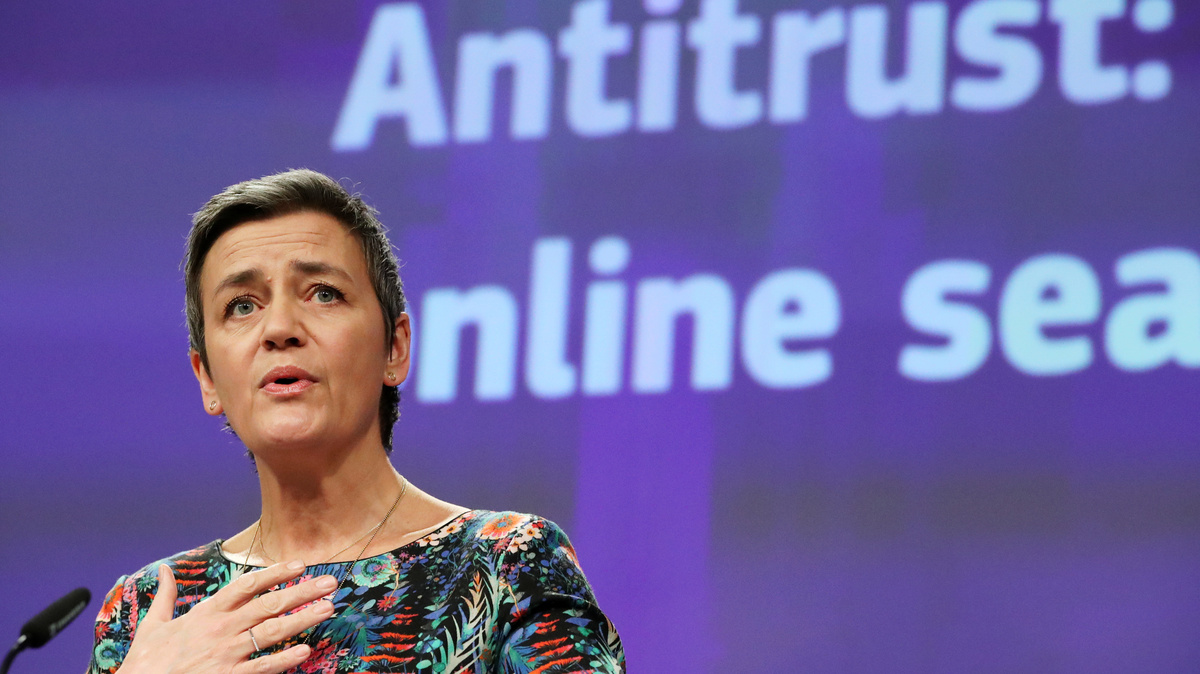 The European Commission is hitting Google with a fine of 1.49 billion euros (some $1.7 billion) for "abusive practices" in online advertising, saying the search and advertising giant broke the EU's antitrust rules and abused its market dominance by preventing or limiting its rivals from working with companies that had deals with Google. The case revolves around search boxes that are embedded on websites and that display ads brokered by Google.

Those ads are powered by AdSense for Search — a business unit within Google that allows websites and apps to make money on search ads, much as Google does on its main search page.

But for years, AdSense contracts also gave Google a wide range of control in how the ads work, the EU says. Google included the conditions in contracts that covered how its brokered ads would appear in search tools that are commonly embedded on newspaper sites, blogs and travel companies.

The conditions evolved over time, from exclusivity clauses in 2006 to "relaxed exclusivity" in later years. But the practice still damaged competition, European regulators said, noting that later requirements let Google control how its rivals' search ads would appear — including the size, color and font they used.

"This is illegal under EU antitrust rules," said EU Commissioner Margrethe Vestager, who is in charge of competition policy. "The misconduct lasted over 10 years and denied other companies the possibility to compete on the merits and to innovate — and consumers the benefits of competition."

She added that in addition to the fine, the ruling means "anyone who has suffered damage because of Google's behavior can also claim compensation from Google through national courts."

Google has cemented its dominance in online search adverts and shielded itself from competitive pressure by imposing anti-competitive contractual restrictions on third-party websites.
This is illegal under #EUantitrust rules.
Read more → https://t.co/wGnxS9s4Rn pic.twitter.com/ozLrWUHr72

Google stopped using the exclusive contract clauses in 2016, when the EU objected to them. This week, the company says it agrees with the commission's belief that healthy markets have wide benefits.

"We've always agreed that healthy, thriving markets are in everyone's interest. We've already made a wide range of changes to our products to address the Commission's concerns," said Kent Walker, Google's senior vice president of Global Affairs. "Over the next few months, we'll be making further updates to give more visibility to rivals in Europe."

It's the third multibillion-dollar penalty the EU has recently laid on Google. Last summer, the European Commission issued a $5 billion antitrust fine for forcing Android phone-makers to install the Google search app and the Chrome Web browser.

And in 2017, the EU fined Google $2.7 billion after finding that the company had used its market-dominating search engine to drive people toward another Google product, its shopping service.

Both Vestager and Walker mentioned those earlier cases, with each of them saying Google has changed how it does business as a result.

In levying the latest fine, the EU noted that the roughly $1.7 billion represents "1.29 percent of Google's turnover in 2018." It adds that the fine was calculated based on Google's search revenues in the EU market.

As for what the EU will do with the $1.7 billion it gets from Google, the commission says the fine will lower member nations' contributions to its budget.

In the U.S., Google faced its most serious antitrust threat in 2013 — but the Federal Trade Commission ended its probe after the tech giant agreed to change some of its business practices, in what was seen as an enormous victory for the company.

Last November, President Trump said his administration was looking into pursuing potential antitrust violations by Google and other dominant market players, such as Amazon and Facebook. That came two months after Sen. Orrin Hatch called on the FTC to investigate Google again.