Accessibility links
Trump Attacks John McCain; Johnny Isakson Calls His Words 'Deplorable' The president again complained about the late Arizona senator during an Ohio speech, even criticizing the McCain family for not showing gratitude to the president over the late senator's funeral.

Trump Carries On Criticism Of McCain, As A Republican Calls His Words 'Deplorable'

Trump Carries On Criticism Of McCain, As A Republican Calls His Words 'Deplorable' 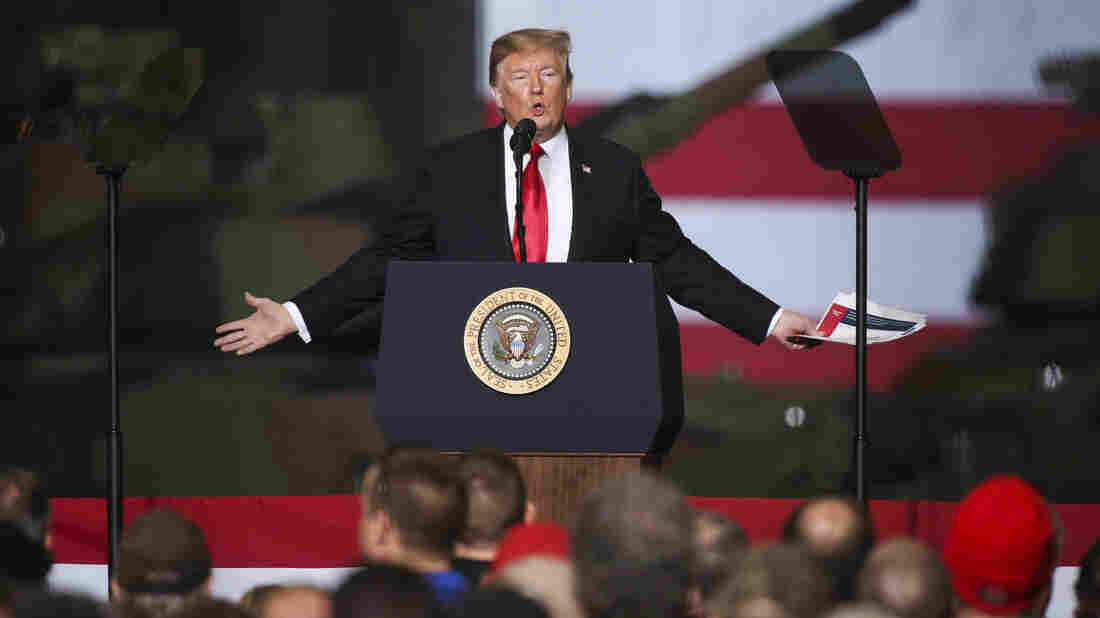 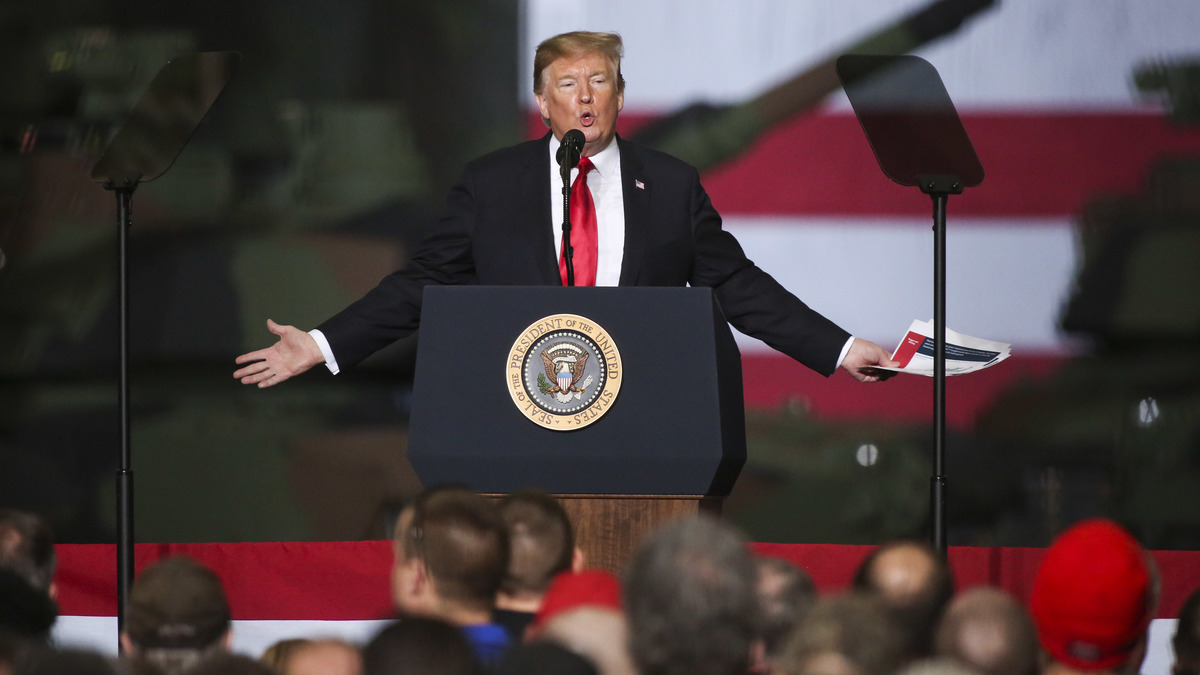 President Trump continues to pile on criticism of the late Sen. John McCain, complaining on Wednesday during a speech in Ohio that the Arizona senator's family never thanked him for the Vietnam War hero's funeral, which involved large ceremonies in Washington, D.C.

"I gave him the kind of funeral that he wanted, which as president I had to approve," Trump told a crowd at an Army tank manufacturing plant in Lima. "I don't care about this. I didn't get [a] thank you. That's OK. We sent him on the way, but I wasn't a fan of John McCain."

Trump was the only living president not to attend McCain's September 2018 service at the National Cathedral, during which several speakers made not-so-veiled comparisons between the current commander in chief and the 2008 GOP presidential nominee who had been tortured for over five years after his plane was shot down over Vietnam. McCain's daughter Meghan said during her emotional eulogy that "the America of John McCain has no need to be made great again because America was always great" — an allusion to the president's campaign slogan.

Trump's latest comments are only the latest salvo of the past few days, continuing a years-long feud with McCain, even from beyond the grave, and he's irritating several Republican senators.

"It will be deplorable seven months from now if he says it again. And I will continue to speak out, because there's one thing we've got to do — you may not like immigration, you may not like this, you may not like that, you may be a Republican, you may be a Democrat, but we're all Americans," Isakson said during an interview with Georgia Public Broadcasting's Political Rewind with Bill Nigut. "There aren't Democratic casualties and Republican casualties on the battlefield — there are American casualties. And we should never reduce the service that people give to this country, including the offering of their own life, to anything but political fodder in Washington, D.C."

McCain Makes A Final Return To Washington For Rare Honors

Isakson said he was just keeping a promise he made shortly after the Arizona senator's death to defend McCain's honor and military record from anyone who would dare to besmirch it — even the president.

"If my kids ever said John McCain was never a war hero...they'd have a serious conversation with me, and I would have it with them," Isakson told GPB. 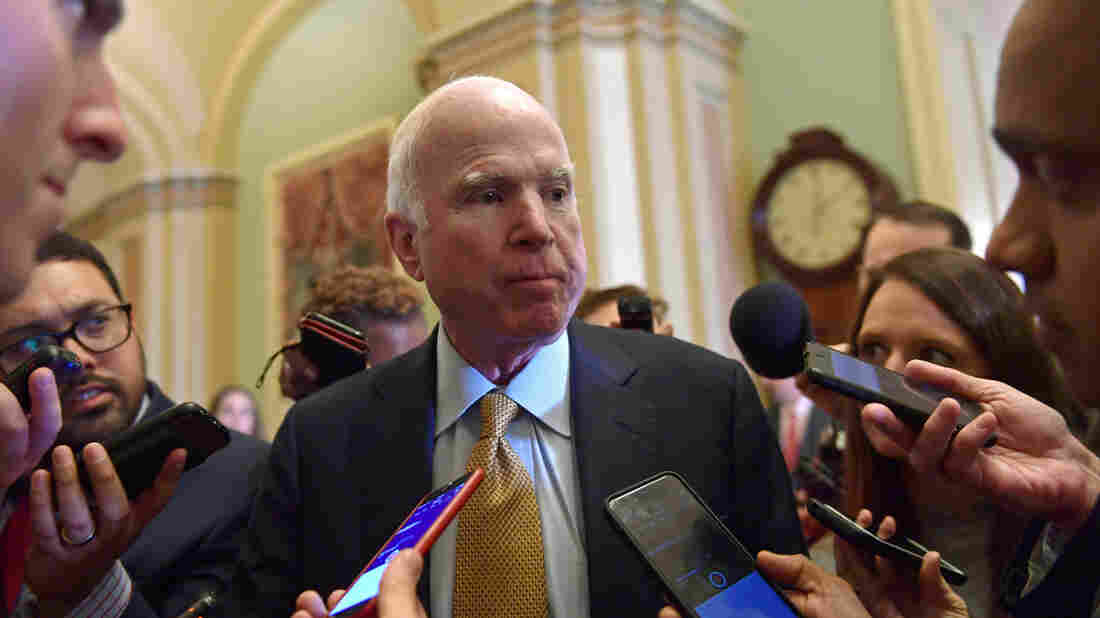 Sen. John McCain, R-Ariz., is pictured speaking to reporters in the Capitol in October 2017. He died from brain cancer in August 2018. Susan Walsh/AP hide caption 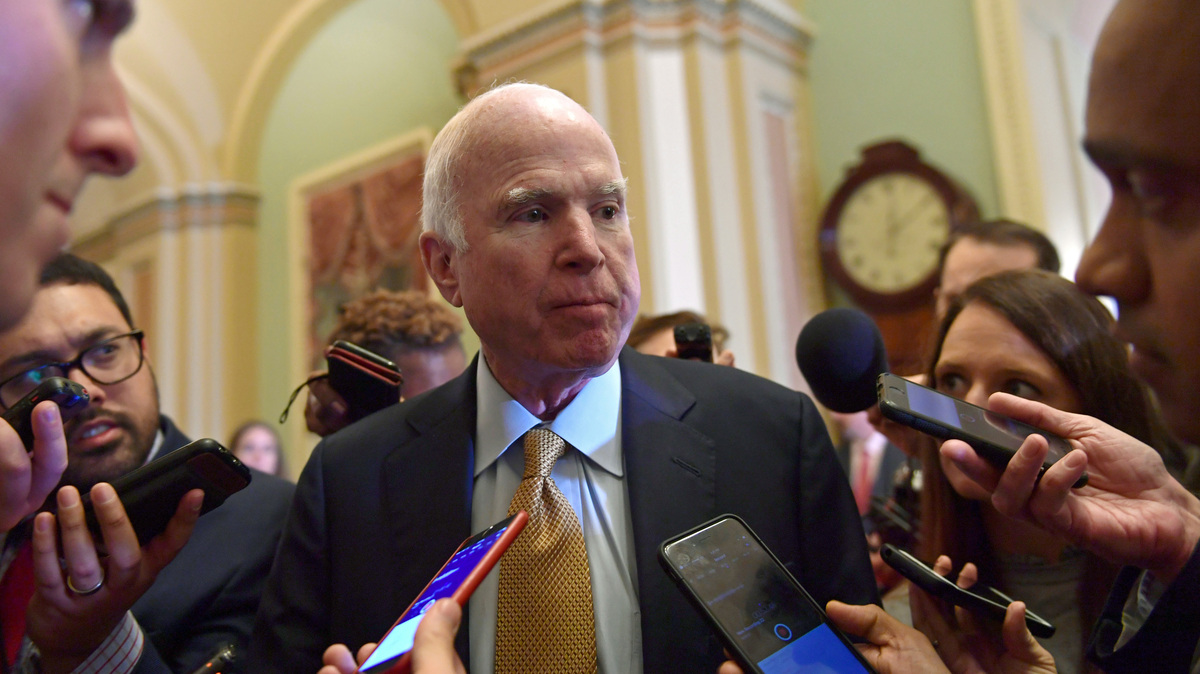 Sen. John McCain, R-Ariz., is pictured speaking to reporters in the Capitol in October 2017. He died from brain cancer in August 2018.

Yet, that is the language Trump has continued to use about McCain, who died in August from an aggressive form of brain cancer. Over the weekend, Trump revived his criticism, tweeting about McCain's involvement in alerting the FBI to a controversial Russia dossier, the subject of recent news reports. Trump also then retweeted a woman who wrote she "hated" McCain and that "Millions of Americans truly LOVE President Trump, not McCain. I'm one!"

Spreading the fake and totally discredited Dossier “is unfortunately a very dark stain against John McCain.” Ken Starr, Former Independent Counsel. He had far worse “stains” than this, including thumbs down on repeal and replace after years of campaigning to repeal and replace!

So it was indeed (just proven in court papers) “last in his class” (Annapolis) John McCain that sent the Fake Dossier to the FBI and Media hoping to have it printed BEFORE the Election. He & the Dems, working together, failed (as usual). Even the Fake News refused this garbage!

On Tuesday in the Oval Office, Trump echoed those sentiments again, saying that, "I was never a fan of John McCain, and I never will be."

Isakson also issued a rebuke to Trump in the wake of McCain's death, when at first the White House didn't issue the traditional proclamation to lower all flags on federal grounds to half-staff to honor McCain, something the Georgia senator reminded the conservative online publication The Bulwark Wednesday morning when he said he would be pushing back again. Trump eventually relented on that issue, ordering flags lowered until McCain's burial, as is customary.

The bad blood between Trump and McCain has festered for several years now. Shortly after Trump announced his candidacy in 2015, McCain criticized him for his announcement speech in which the real estate magnate had called Mexican immigrants "rapists" and "murderers." Trump retorted when he held a campaign rally in Phoenix, as the crowd booed their senior senator. McCain later said Trump had "fired up the crazies."

The major breach in their relationship came in July 2015 when Trump — who avoided the Vietnam draft after claiming he had bone spurs — said that McCain, who endured over five years of torture as a prisoner of war at the infamous Hanoi Hilton, was only seen as was "a war hero because he was captured" and that he liked "people that weren't captured."

There did appear to be a detente at one point after Trump endorsed McCain in his GOP Senate primary. Trump even referenced that in his Wednesday speech, saying he had given McCain his blessing "at his request." However, just before Election Day 2016, McCain — as did many other Republicans — abandoned him following the release of a 2005 Access Hollywood video where Trump had bragged about groping women.

McCain And Trump: How 2 Divergent Leaders Collided, Over And Over

The two never reconciled, and the following summer McCain would announce he had been diagnosed with brain cancer. Shortly after that, the Arizona senator returned to the Senate in August 2017 to cast a "no" vote against the GOP's plan to repeal the Affordable Care Act, which Trump still sees as the ultimate betrayal and mocks McCain for. He often dramatically re-enacted the senator's emphatic thumbs down on the Senate floor during rallies, even as McCain was undergoing treatment.

Over the past year, Trump has struck up a surprising alliance with Sen. Lindsey Graham, R-S.C., who often refers to McCain as his best friend in the Senate and faces a re-election bid next year. In a February interview with The New York Times Magazine, Graham noted that McCain also had to move to the right when he faced primary threats back home: "If you don't want to get re-elected, you're in the wrong business...I have never been called this much by a president in my life."

Following Trump's weekend remarks hitting McCain, Graham tweeted that "nothing about his service will ever be changed or diminished."

Nothing about his service will ever be changed or diminished. (2/2)

Back home in South Carolina, Graham did address the president directly, but his comments were still far more tepid than Isakson's admonition.

"I think the president's comments about Senator McCain hurt him more than they hurt the legacy of Senator McCain," Graham told local reporters Wednesday. "I'm going to try and continue to help the president....I've gotten to know the president, we have a good working relationship. I like him — I don't like it when he says things about my friend John McCain."

Utah Sen. Mitt Romney, a freshman who was the Republican nominee for president in 2012, also took on Trump's comments on Tuesday, tweeting that "I can't understand why the President would, once again, disparage a man as exemplary as my friend John McCain: heroic, courageous, patriotic, honorable, self-effacing, self-sacrificing, empathetic, and driven by duty to family, country, and God."

I can’t understand why the President would, once again, disparage a man as exemplary as my friend John McCain: heroic, courageous, patriotic, honorable, self-effacing, self-sacrificing, empathetic, and driven by duty to family, country, and God.

Senate Majority Leader Mitch McConnell, R-Ky., also praised McCain and his service on Wednesday, though he made no direct reference to Trump.

Today and every day I miss my good friend John McCain. It was a blessing to serve alongside a rare patriot and genuine American hero in the Senate. His memory continues to remind me every day that our nation is sustained by the sacrifices of heroes.

Senate Minority Leader Chuck Schumer, D-N.Y., said he plans to revive a bill he had proposed last year to rename the Russell Senate Office Building in honor of McCain.

McConnell and some other Republicans had not come on board with that idea initially, and Isakson also told GPB he wasn't fully behind that yet, which would mean stripping the name of former Georgia Democratic Sen. Richard Russell — an avowed segregationist — off of it. Isakson argued that if that was the case, even other monuments in D.C. honoring former Presidents George Washington and Thomas Jefferson, who were slaveholders, should be looked at.

Instead, the Georgia senator suggested waiting for the recommendations from a group considering how to best honor McCain, which includes his widow, Cindy, and his children.

Why Sen. Chuck Schumer Wants To Rename A Senate Building After John McCain