Accessibility links
Review: Docudrama 'Hotel Mumbai' Is Grueling, Cynical The film's choice to foreground white characters over the deaths of many Indian victims makes for a cold, distasteful watch. 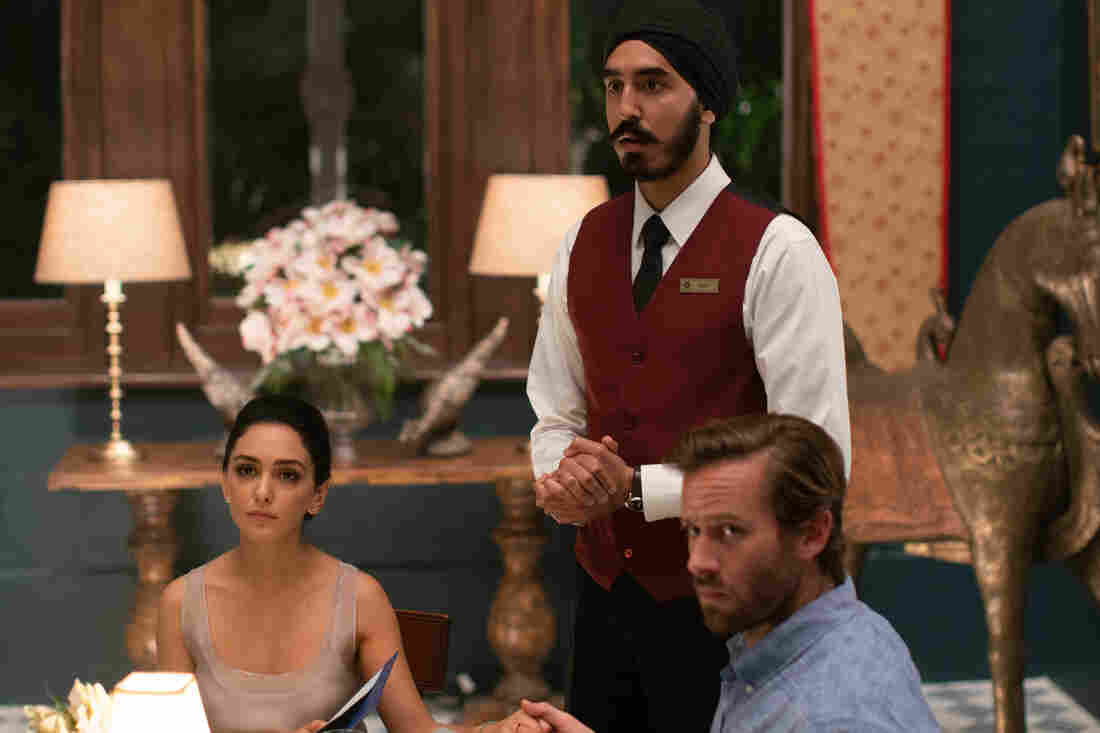 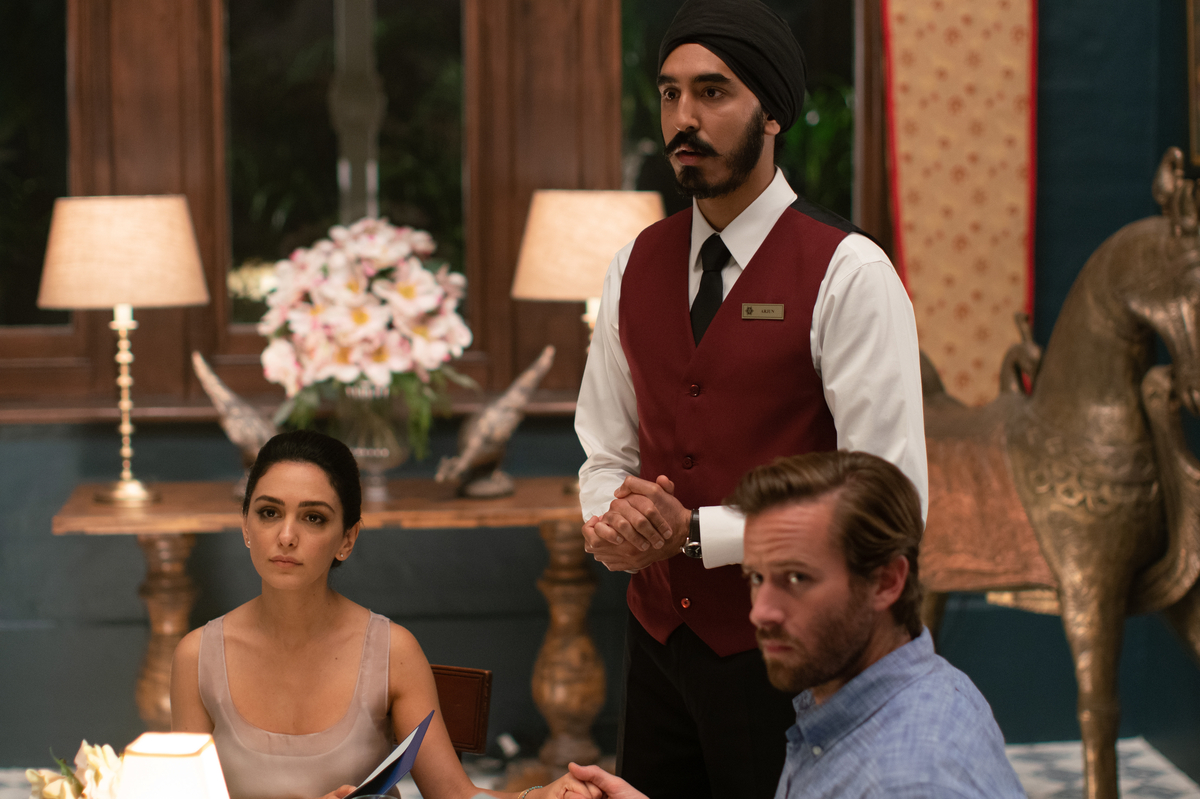 Nazanin Boniadi, Dev Patel, and Armie Hammer star in Hotel Mumbai, a docudrama about the 2008 attack on the Taj Mahal Palace Hotel.

A single moment approaches true serenity in the boilerplate true-terror thriller Hotel Mumbai. The movie depicts the 2008 terror attacks on the Indian city, some of which centered on a standoff at the Taj Mahal Palace Hotel. I remember the attacks; the smoke billowing from the hotel, the survivors clamoring through broken windows to escape to the ground, several floors below. The movie undertakes to present, in excruciating detail, the day's violence.

That one moment of peace, before all the blood, occurs in the opening moments. A group of ten or so young terrorists — boys in ragged clothes — drift on a small vessel toward Mumbai, a metropolis shrouded in an amber haze. They're listening to instructions from a Brother Bull, an insidious terrorist mastermind dispatching instructions over the phone. The film's remaining two hours curdle into a uniquely 21st-century horror movie, with terrorists as the villains, rapid-fire guns as the weapons, and cell phone batteries as the lifeline to loved ones.

As Hotel Mumbai premieres, we are one week out from a massacre in two New Zealand mosques, a country where this film won't be screened for some time, to prevent collective post-traumatic stress. It's understandable. Hotel Mumbai is a painful watch, one that plunges its viewers into grisly moments of death and terror. It's an exploitation movie that feels truly exploitative, ripped from the headlines of the past decade and unconcerned with the deaths of many of its non-white victims (more on that later). It goes on and on; at two hours, its relentlessly consistent violence becomes unbearable.

While Hotel Mumbai delivers white-knuckle tension, it's of a kind that feels shrewdly calculated, like that of a video game. Everything just seems sort of ... cruelly perfect. As soon as a group of hotel guests shuffle through a door, a gunman wanders through the frame in the background, narrowly missing his prey. In another scene, a woman hides in a closet while a gunman patrols outside. For a moment, the gunman's eyes wander over the elaborately grated door that shields her, but he misses her. She covers the mouth of the baby she's carrying to keep it from crying out, and in the moment, it's impossible not to think of it as a sort of game-level objective: Keep the baby quiet for as long as possible, and survive. In such a harrowing context, the film's presentation comes off as cold and inhumane.

But it's hard to describe a movie that lingers on its characters' faces as long as this one does — even those of the terrorists' — inhumane. And in that sense, there's some small measure of catharsis here. Sure, the majority of our main characters, which include Dev Patel as Arjun, a hotel staffer, Armie Hammer and Nazanin Boniadi as new parents, and Jason Isaacs as a lustful and brash Russian businessman, shed the various flaws that characterize them in by-the-numbers arcs over the course of the attack. But we also spend a lot of time with Imran, played by Amandeep Singh, one of the terrorists who ultimately undergoes a faith crisis triggered by a phone call from his father. He screams in anguish as he realizes that Brother Bull, and by extension his entire belief structure, may be grievously unjust. We watch Imran's face contort; in a film that otherwise strains to convince us that its characters are fully human, this scene locates a moment of simple truth.

Imran is unique in this aspect, however. Otherwise, characters serve as mere plot functions; this effect is most pronounced among the hotel staff, led by a chef played by Bollywood legend Anupam Kher, who perform their duties in the face of danger with a telegraphed grace and dignity that may be historically accurate but that lacks cinematic truth.

In one scene, a white hotel guest, trapped in sealed room with other guests, expresses concern over Arjun's Sikh headwear. He responds not by heeding his boss's advice and avoiding her, but rather by approaching her, showing her pictures of his family, and explaining that his turban and hairstyle follow his religious beliefs. It's almost preachy, and feels like homework.

Hotel Mumbai once again raises the question of whether it's even possible to portray mass violence in a humane way that leaves room for empathy. The film's choice to literally foreground its white characters while depicting countless Indian men and women as indistinct blurs in the background, murdered with their backs turned to the camera, doesn't make a convincing case for yes.

Its focus feels manufactured for American audiences, its sympathy reserved for those with recognizable features and easy-to-pronounce names. And that focus dampens the film, because the violence can't seem particularly random. In Hotel Mumbai, death is ever-present, and it is so calculatingly exacted by its terrorists — and its filmmaker — that its depiction comes close to sadism: grueling, yes, but never truly shocking.

A previous version of this story incorrectly said the film would not screen in New Zealand and Australia.