Accessibility links
Trump's Immigration Crackdown May Be One Factor Behind Migrant Surge Three possible factors account for the surge of migrants at the border: economics, social media and the Trump administration's own tougher immigration policies. 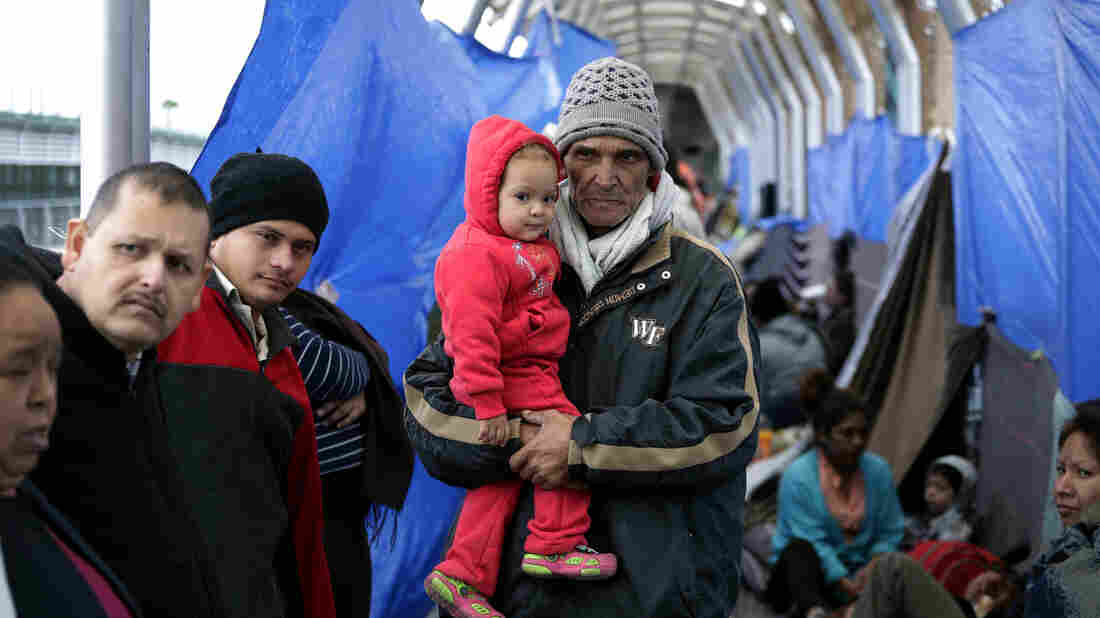 Families hoping to seek asylum in the United States wait on the bridge connecting Reynosa, Mexico, to Hidalgo, Texas. At the current pace, the federal government says, almost 100,000 migrants will cross the border this month. Eric Gay/AP hide caption 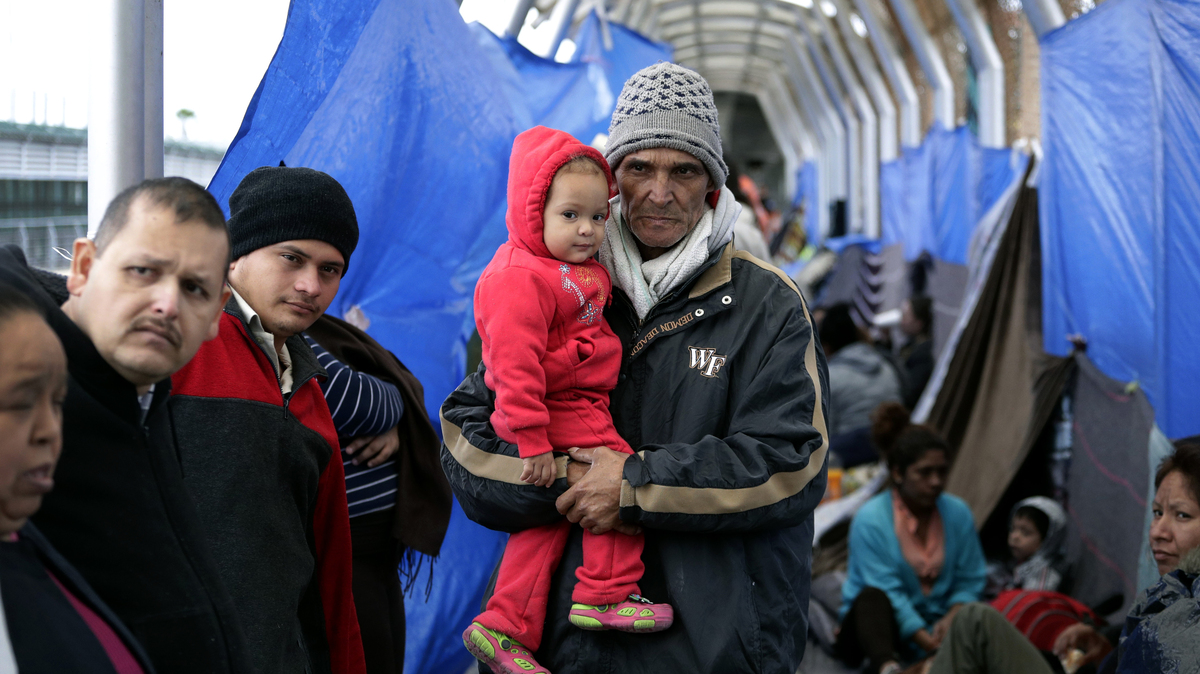 Families hoping to seek asylum in the United States wait on the bridge connecting Reynosa, Mexico, to Hidalgo, Texas. At the current pace, the federal government says, almost 100,000 migrants will cross the border this month.

Irsi Castillo clutches her 3-year-old daughter to her chest to shield her from the wind. They've just crossed the Rio Grande and stepped onto U.S. soil in El Paso, Texas, after traveling from Honduras.

Thousands of migrants like Castillo are crossing the border every day and turning themselves in to the Border Patrol. They're fleeing poverty and violence in Central America.

At the current pace, Homeland Security Secretary Kirstjen Nielsen says, almost 100,000 migrants will cross the border this month — far exceeding last month's total. Nielsen traveled to Texas on Thursday and talked with local sheriffs about what she's calling a "catastrophe" at the Southern border.

"Our laws aren't keeping up with the migrant flows," Nielsen said earlier this week in Washington. "And until they are fixed, the situation will only get worse and more heartbreaking."

And that's at the heart of the current immigration debate. One side says these migrants deserve the chance to apply for asylum, while the other says we need to change our immigration laws to stop them from coming.

But these familiar positions don't tell us why the numbers are climbing so quickly. Conditions in the Northern Triangle countries of El Salvador, Guatemala and Honduras haven't changed dramatically, nor have U.S. immigration laws. 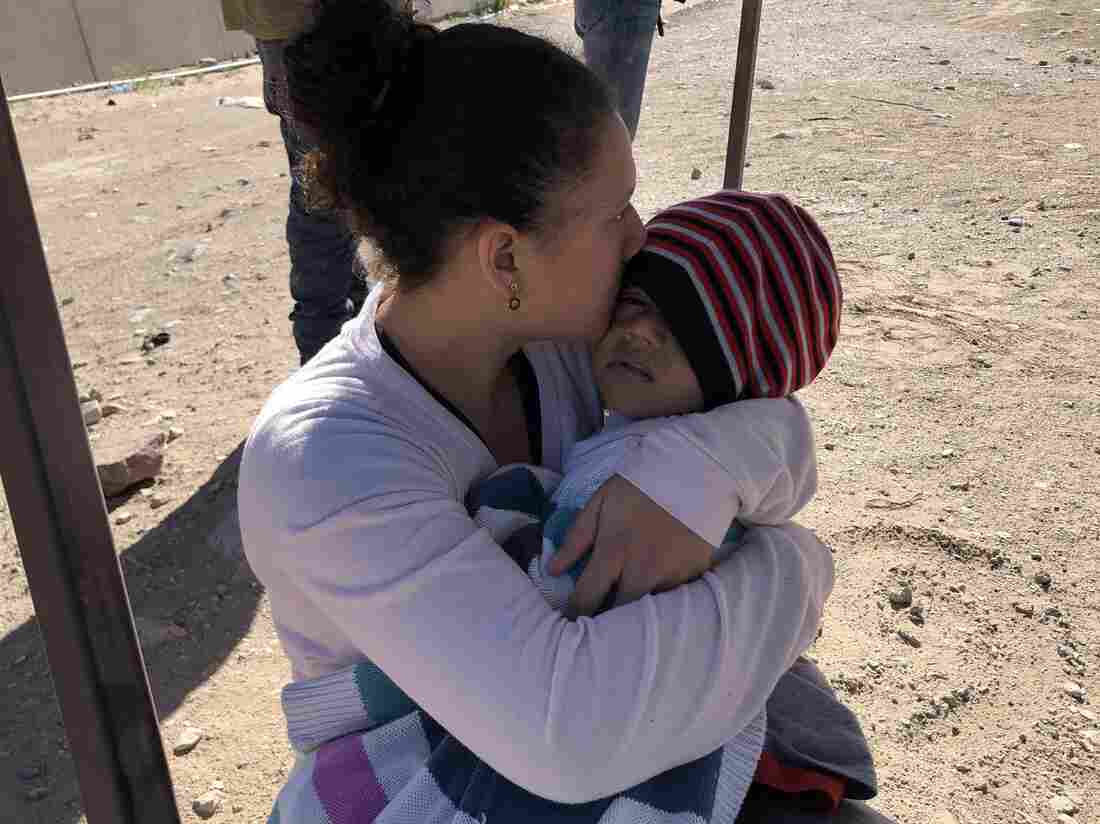 Irsi Castillo of Honduras holds her 3-year-old daughter just after crossing the Rio Grande into the U.S. at El Paso, Texas. Castillo is one in the surge of thousands of migrants claiming asylum at the U.S.-Mexico border. John Burnett/NPR hide caption 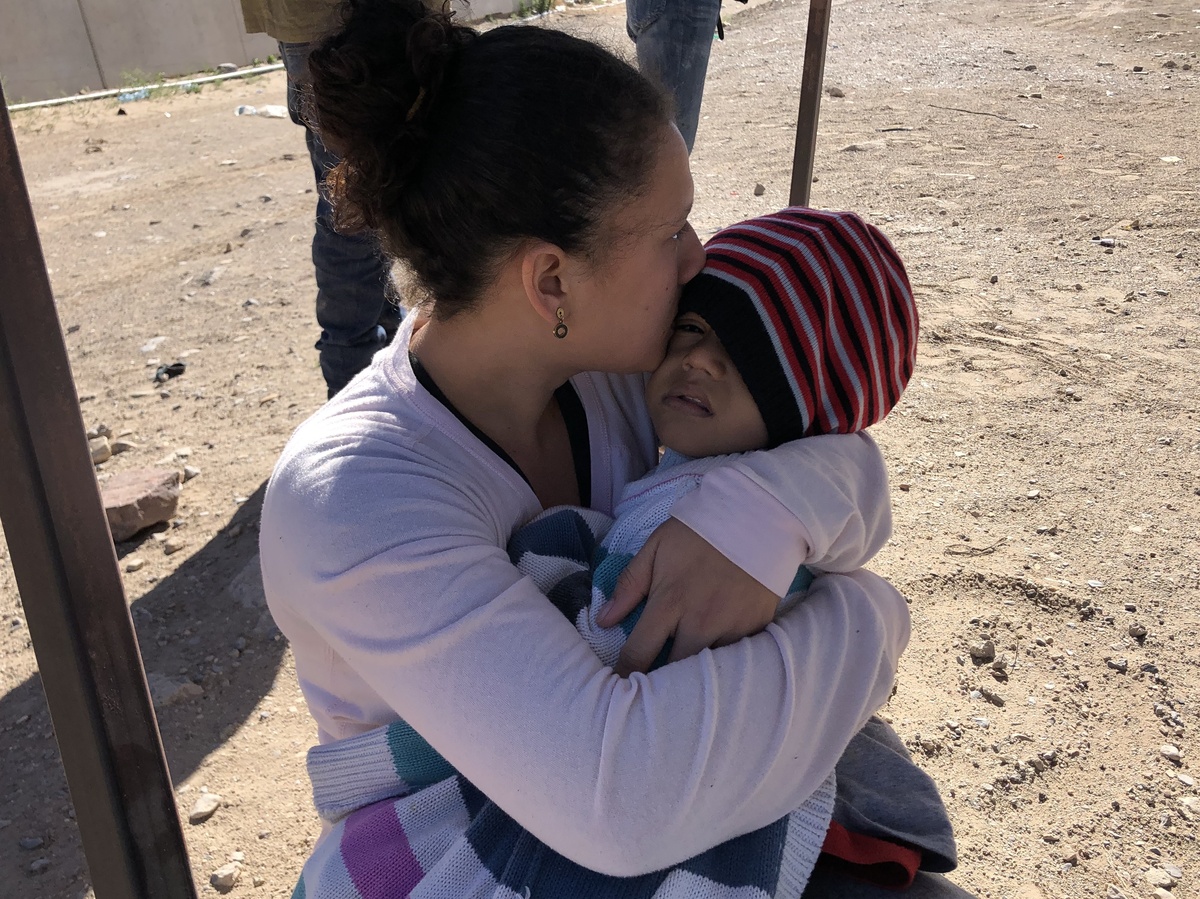 Irsi Castillo of Honduras holds her 3-year-old daughter just after crossing the Rio Grande into the U.S. at El Paso, Texas. Castillo is one in the surge of thousands of migrants claiming asylum at the U.S.-Mexico border.

So why are more migrants choosing to come now? NPR interviewed more than a dozen recent migrants and experts for this story. And we found three possible factors: the simple economics of cheaper human smuggling costs, the reach of social media and — ironically — the Trump administration's own immigration crackdown.

The business of human smuggling

It's not just easier for migrants to get into the U.S. with a child. In many cases, it's cheaper as well.

"If you traveled by yourself as a single male, today it would cost you almost $12,000," said Luis Argueta, an award-winning filmmaker based in Guatemala who has been documenting international migration since the 1970s. "But if you have a child, it'll cost a lot less."

For his next film, Argueta has been interviewing migrants, including a man who left Guatemala and crossed the border with his 13-year-old daughter in February. Argueta says the journey cost him less than $7,000 for both of them.

"So it's quite a bit of savings. There is a moral and personal cost, and he is not immune to that," Argueta told me. "But on the other hand, he knows that his child will be able to have a better education."

Smugglers charge the families less because they drop the families at the border and tell them to turn themselves in on the other side. But migrants traveling alone have to be smuggled across the border because they are more likely to be detained or immediately deported. And as smugglers cut the price for families, they get more customers.

'People are seeing that others are making it'

A second possible factor that's driving the surge in migration is social media.

Smugglers use social networks to market their services. And migrants can see that their own family members and friends have made it to the U.S, said Argueta.

"People are seeing that others are making it," said Argueta. "Everybody has cell phones. Everybody has Facebook. You know you'll see pictures of people with vehicles, with jobs, with nice clothes."

People think that he might be serious. So they have to do it now. It's now or never.

That includes the Guatemalan man Argueta recently interviewed for his film.

"I have friends here in the U.S., and we talk on social media," the man told Argueta in Spanish. "I asked what's it like here, and they said it's good. True, you have to borrow money to travel here. But it doesn't matter how big the debt is — you can pay it off once you arrive."

There's a third possible factor at play here, and that is the Trump administration's own policies.

The administration has tried a variety of ways to deter these migrants — even separating parents and children at the border under its "zero tolerance" policy last year. But those efforts may have backfired by drawing so much attention to the crackdown at the border.

"This is very ironic," said Guadalupe Correa-Cabrera, who teaches border security and migration at George Mason University. She says migrants know that President Trump wants to keep them out.

"People think that he might be serious. So they have to do it now. It's now or never," Correa-Cabrera said.

That's another reason Castillo, the young mother from Honduras, decided to make the trip now.

"I watch the news, and, yes, that's our fear," she said. "That the laws will change. And if you bring a child, they won't let you enter. It's better to come sooner. We sold what little we had in our country and hit the road."

She also heard from relatives in the U.S. that it would be easier to enter the country if she brought a child. Migrant families are likely to be released from detention in the U.S. to wait for their day in immigration court.

So, like tens of thousands of other migrants, Castillo decided that the bigger risk would be staying home.