Accessibility links
Mueller Report Finished After Probe Into 2016 Election Interference Mueller is not recommending any more indictments, a senior Justice Department official said. Members of Congress in both parties are calling for the report to be released. 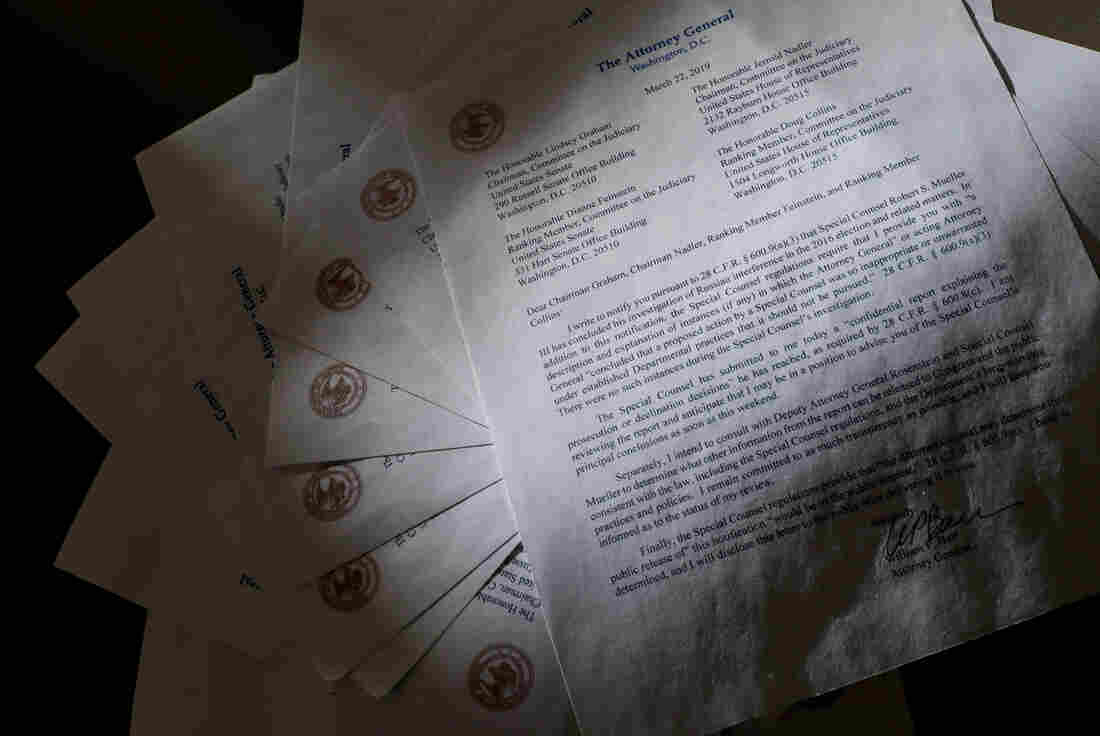 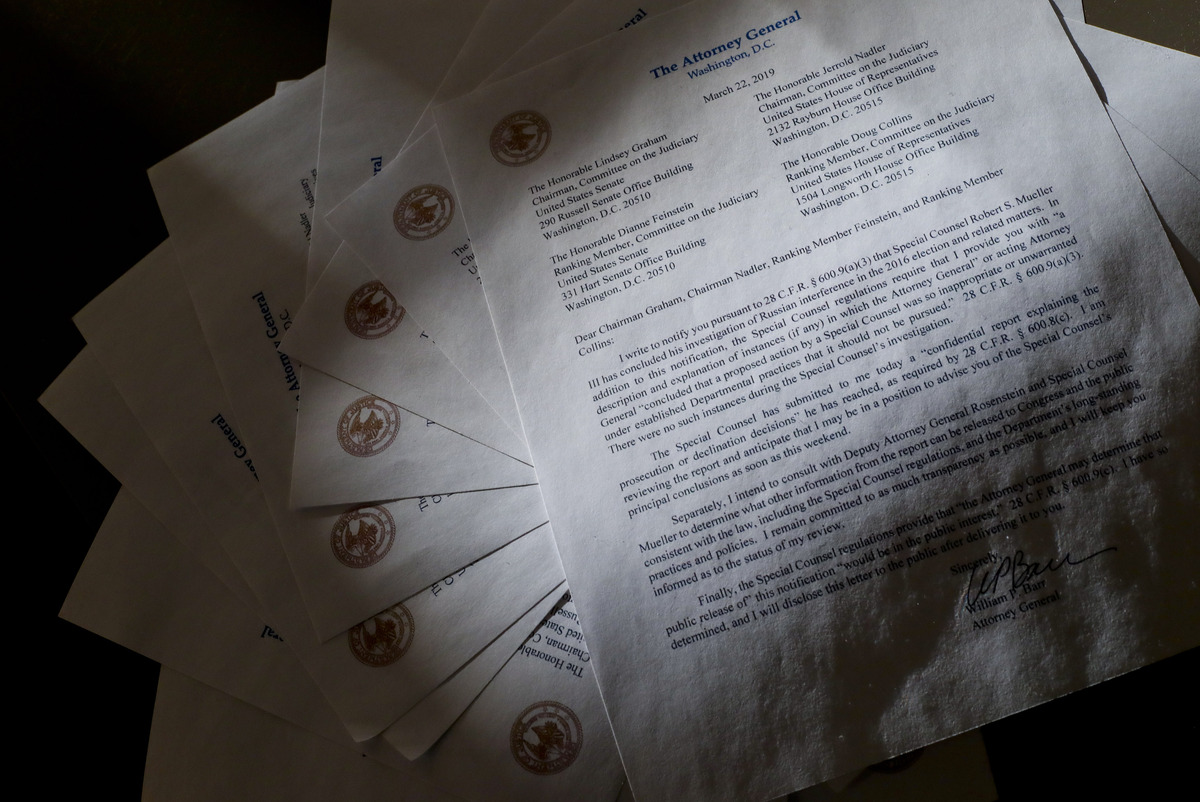 Copies of a letter from Attorney General William Barr advising Congress that Special Counsel Robert Mueller has concluded his investigation.

Attorney General William Barr received a report on Friday by special counsel Robert Mueller about the findings from Mueller's investigation into the Russian attack on the 2016 presidential election.

Barr notified congressional leaders in a letter that said he is "reviewing the report and anticipate that I may be in a position to advise you of the special counsel's principal conclusions as soon as this weekend."

The investigations by Congress and other federal and state authorities into other aspects of Trump's 2016 campaign and business will continue. So it isn't clear whether they may lead to criminal charges separate from the work by Mueller that has ended.

As to Friday's report, Barr wrote to congressional leaders that he intends to consult with Mueller and with Deputy Attorney General Rod Rosenstein "to determine what other information from the report can be released to Congress and the public consistent with the law."

A message from Mueller was delivered early in the afternoon to Rosenstein and given "within minutes" to Barr, a Justice Department spokeswoman said.

Officials would not characterize the length of Mueller's report but would say it is "comprehensive."

The White House learned about the completion of the report at 4:45 p.m., when attorney Emmet Flood in the White House counsel's office received the notification.

Barr has previously committed generally to airing publicly what he gets from Mueller — as much as permitted by the law and regulations.

He may opt to uphold that pledge by releasing a redacted version of what Mueller has prepared, or Barr may write his own report to summarize the confidential findings for public consumption.

One thing that has become clear is that the leadership of the Justice Department did not reject any proposed action by Mueller. Regulations require the attorney general to notify Congress if the attorney general says no to some request. Barr wrote that he had no such notifications to make.

Rosenstein phoned Mueller at 4:30 on Friday afternoon to thank him for his service. The deputy attorney general has been expected to leave the Justice Department following the nomination of his replacement but no date has yet been set for Rosenstein's departure.

Calls start for Mueller report to be public

Members of Congress in both parties, including the leaders of the House and Senate, called for the report to be released.

Sen. Mark Warner, D-Va., the vice chairman of the Senate intelligence committee, also said Congress must get access to the report's underlying documents and other materials.

"Congress and the American people deserve to judge the facts for themselves," Warner said. "The special counsel's report must be provided to Congress immediately, and the attorney general should swiftly prepare a declassified version of the report for the public. Nothing short of that will suffice."

Rep. Doug Collins, R-Ga., the ranking member on the House Judiciary Committee, wrote on Twitter that he agreed.

Sen. Lindsey Graham, R-S.C., chairman of the Senate Judiciary Committee, called it significant that Barr had told Congress that the leadership of the Justice Department hadn't rejected any requests for authority by Mueller.

"Importantly, the notification also indicates that there were no areas of disagreement between the attorney general or the acting attorney general and special counsel Mueller regarding courses of action," Graham said.

"I have always believed it was important that Mr. Mueller be allowed to do his job without interference, and that has been accomplished," Graham said

Other members of Congress said they want to hear from the principals themselves. Sen. Kamala Harris, D-Calif., who sits on the Senate Judiciary Committee, said she wanted Barr to testify in public on Capitol Hill.

And Rep. Eric Swalwell, D-Calif., who sits on the House intelligence committee, told NPR on Friday afternoon that he wants to hear from Mueller himself.

"We ultimately will have to hear from special counsel Mueller in order to verify," he said. "I don't think the American people will accept anything less than his word."

White House: Next moves are up to Barr

It wasn't immediately clear whether the White House might object to the public release of the report, for example on the ground that it can shield its own workings under executive privilege.

Press secretary Sarah Sanders said administration officials have not yet been briefed about it.

The next steps are up to Attorney General Barr, and we look forward to the process taking its course. The White House has not received or been briefed on the Special Counsel’s report.

What happens next is up to Barr, Sanders said.

The report is expected to provide the most comprehensive accounting so far about what the special counsel and his office have uncovered since his appointment following the dismissal of FBI Director James Comey in May 2017.

Mueller's office took over an FBI counterintelligence investigation that had been underway at that point for nearly a year.

President Trump goes back and forth regarding what he accepts about the Russian interference; he even briefly absolved Russian President Vladimir Putin in person at a 2018 summit in Finland.

But all along, Trump has maintained that the notion that his campaign had conspired with the Russians was a "hoax," one he said was perpetuated by what he called biased conspirators and Democrats desperate for an excuse about why they lost the 2016 election.

The president also frequently referred to the investigation led by Mueller as a "witch hunt" begun by Democrats based on unproven claims.

In fact, suggestions about Russian cyberattacks against the U.S. appeared as early as 2015, when Britain's signals intelligence agency detected Russian activity aimed at political targets in the United States.

Then in the summer of 2016, an Australian diplomat told American officials that a Trump campaign aide he had met in London — junior foreign policy adviser George Papadopoulos — said Russians or their agents had been offering him dirt on Hillary Clinton.

Papadopoulos, Manafort and Flynn all were eventually charged, along with several others.

The existence of the investigation remained an official secret through the election in 2016 and until the early spring of 2017, when Comey revealed at a public hearing of the House intelligence committee that it not only had taken place — it was ongoing.

Trump fired Comey that May. Deputy Attorney General Rod Rosenstein then commissioned Mueller to take over the inquiry as a special counsel within the Justice Department. Mueller appointed attorneys, investigators and other specialists to join the effort.

Mueller's office has negotiated a number of guilty pleas and brought criminal indictments involving both onetime Trump aides and a coterie of Russian military and other operatives charged with attacking the election.

In legal documents, the special counsel's office has painted a detailed picture of the vast information warfare campaign that was conceived by Russian leaders as early as 2014 and then shifted into high gear for the 2016 presidential election.

Russian government operatives traveled to the United States for a reconnaissance trip and then followed up with a multipronged suite of "active measures":

— They waged cyberattacks against hundreds of targets, including top political figures; stole internal emails and documents; and then released them to wreak havoc.

— They probed state-level election systems to look for weakness and to explore what data were included in voter databases, although officials have said no votes were changed.

— They wreaked chaos within the political conversation taking place between Americans both online and in the real world. Not only did online operatives flood social networks with false stories and extreme posts to inflame disagreement, but they also plotted real-life disturbances and demonstrations in the real world during the 2016 campaign.

First, the focus of the activity was to benefit the candidates whom the Russians considered the most extreme in 2016 — including Trump and Vermont Sen. Bernie Sanders. Eventually, it sharpened into a full-scale program in support of Trump.

That realization, combined with Trump's sympathetic messaging about Russia and the contacts discovered between his 2016 campaign and Russians, raised the question of whether Trump's camp might have conspired with the interference.