Accessibility links
In 'The Chief,' An Enigmatic, Conservative Chief Justice John Roberts Walks A Political Tightrope Reporter Joan Biskupic portrays the chief justice as a dedicated conservative who now "has the court he's always wanted" — and she says the law "will likely be what he says it is." 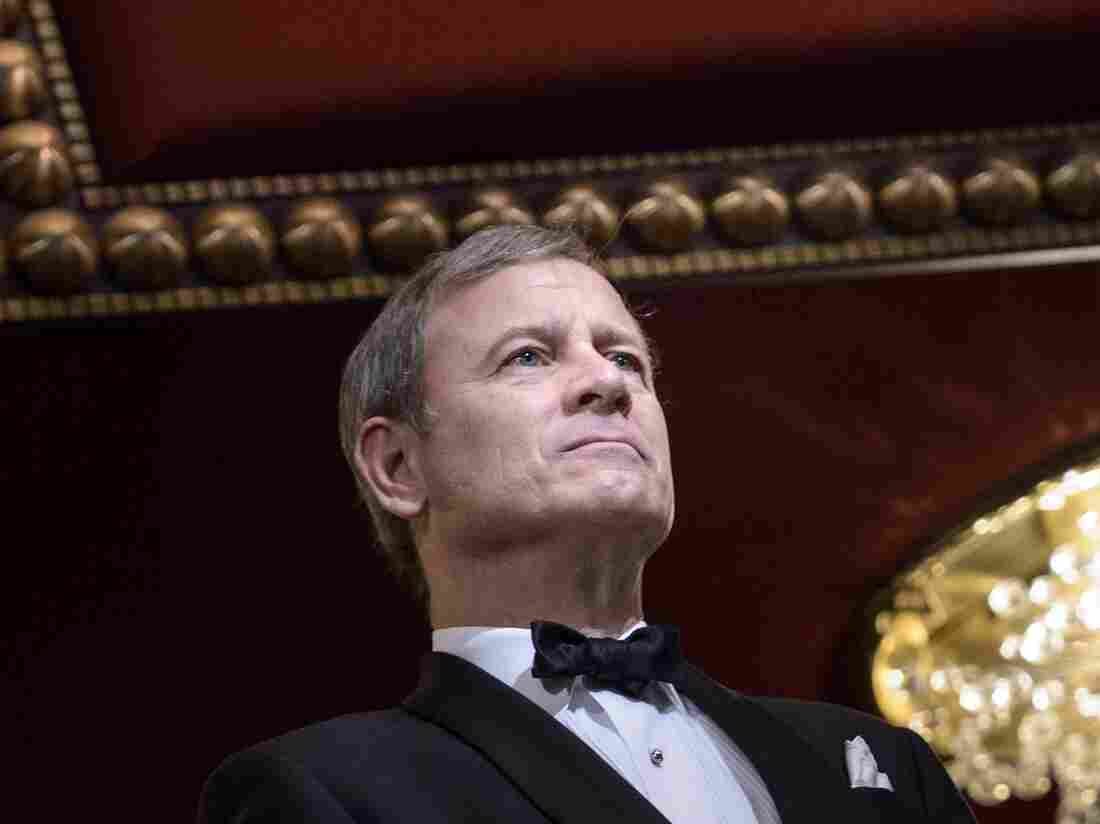 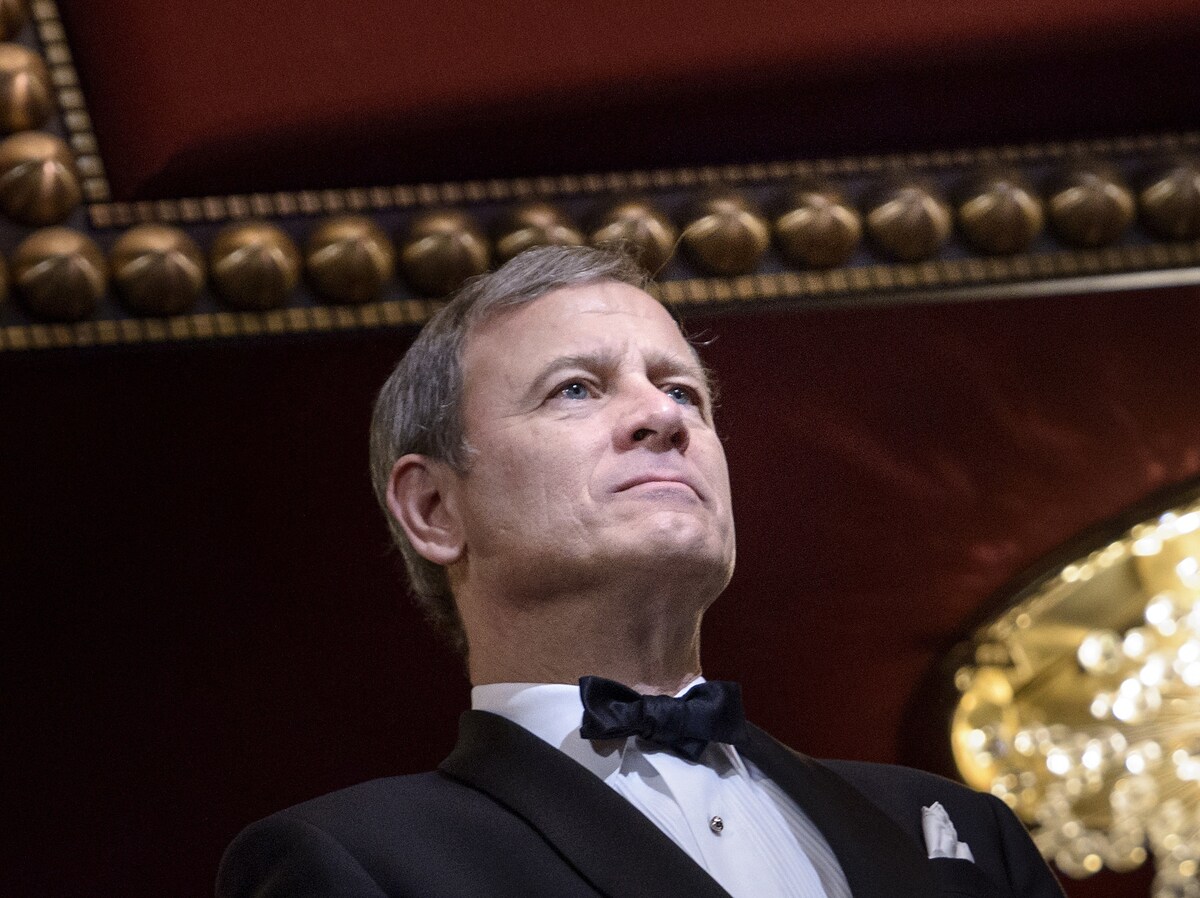 There have been 44 presidents in the nation's history, but just 17 chief justices. Some of the men who presided over the U.S. Supreme Court were enormously influential. Others, not. The chief justice today, John G. Roberts Jr., has already served for 14 years and, at age 64, he could well serve for another 20. 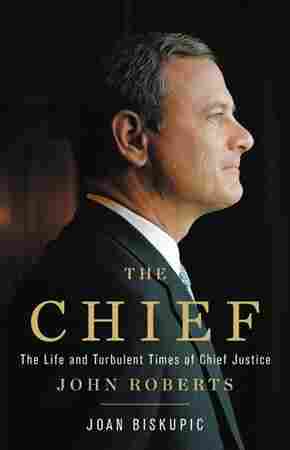 The Life and Turbulent Times of Chief Justice John Roberts

His public persona is charming, funny, and unrevealing.

Seeking to pierce that practiced facade, reporter Joan Biskupic has written a biography called The Chief: The Life and Turbulent Times of Chief Justice John Roberts. It is the fourth biography she has written about a sitting justice, and in some ways, the most enlightening. But she says Roberts was her "toughest subject, start to finish."

Her eight off-the-record interviews with her subject seemed more like fencing matches where she stood on one side, trying to find out or confirm new information, and he stood on the other, trying to find out what she already knew. As she puts it, "If anybody put little thought bubbles over our heads he would have been saying, 'I wish she wasn't asking me these questions,' and I would have said, 'I wish you were Antonin Scalia because he gave me 12 on-the-record interviews and he was happy to talk about why he did what he did.'"

Some colleagues wary of Roberts

Roberts, in contrast, is much more reserved, guarded, even "secretive" — traits that Biskupic reports have made his colleagues on both left and right sometimes "wary of him."

The son of a Bethlehem Steel executive, Roberts was raised in the upper-middle-class, nearly all-white suburbs of Gary, Ind. He was a golden boy from the get-go — an outstanding student at an outstanding Catholic prep school, who excelled as a Harvard undergraduate and at Harvard Law School. As a lawyer, he argued 39 cases before the U.S. Supreme Court.

Even his appointment to the Supreme Court had a lucky twist. Named to succeed Justice Sandra Day O'Connor, his nomination was quickly upgraded two months later when then-Chief Justice William Rehnquist died.

In the years since, his record has been solidly conservative. He has voted consistently to undermine voting-rights laws, emasculating even measures enacted by huge congressional majorities; he's voted against attempts to voluntarily make public schools more racially mixed, against affirmative action in higher education, against laws enacted by Congress to limit the role of big money in congressional campaigns, against abortion rights, against same sex marriage, and for more deference to religious rights.

And yet, he has been roundly denounced by many conservative politicians, including President Trump, who in 2016 called his vote to uphold Obamacare a "disgrace."

For Trump and other conservatives, Roberts' original sin was his decisive fifth vote upholding the health care law.

Biskupic tells a complicated tale of how Roberts arrived at the health care decision. She tells how, to the consternation of fellow conservatives on the court, he changed his initial vote — something that is unusual, but hardly unheard of — and she has put together a fascinating look at negotiations inside the court on the final outcome.

Biskupic, who has covered the Supreme Court for decades, has an interesting take on why Roberts voted as he did. Like his fellow conservatives, he thought Congress exceeded its power in requiring health care for everyone. But he viewed the penalty imposed on those who didn't get health coverage as a tax, and thus a legitimate exercise of congressional power. And that vote saved the economic core of the law.

"Perhaps his vote stemmed from his concern for the Court's legitimacy," or his desire not to have the Supreme Court at the center of the 2012 election campaign, Biskupic says.

But in the end, as she said in an interview with NPR, it very likely was also "born of a concern for this important law and the business of health care, which he knew well from his days" as a lawyer representing the industry.

So in the Affordable Care Act case, Roberts' view was influenced by his experience, his practical understanding of the economics of health insurance. In contrast, his views on race and religion are far more ideological, doctrinaire and immovable. On these questions, Roberts has "never wavered," according to Biskupic.

"I believe that there's this straight line from what he wrote as a young lieutenant in the Reagan years to what he writes now from the center chair of the Supreme Court," she says.

Indeed, she reports that in the Reagan years, Roberts led the charge to oppose renewal of the Voting Rights Act and strategized on how to limit school desegregation decrees. 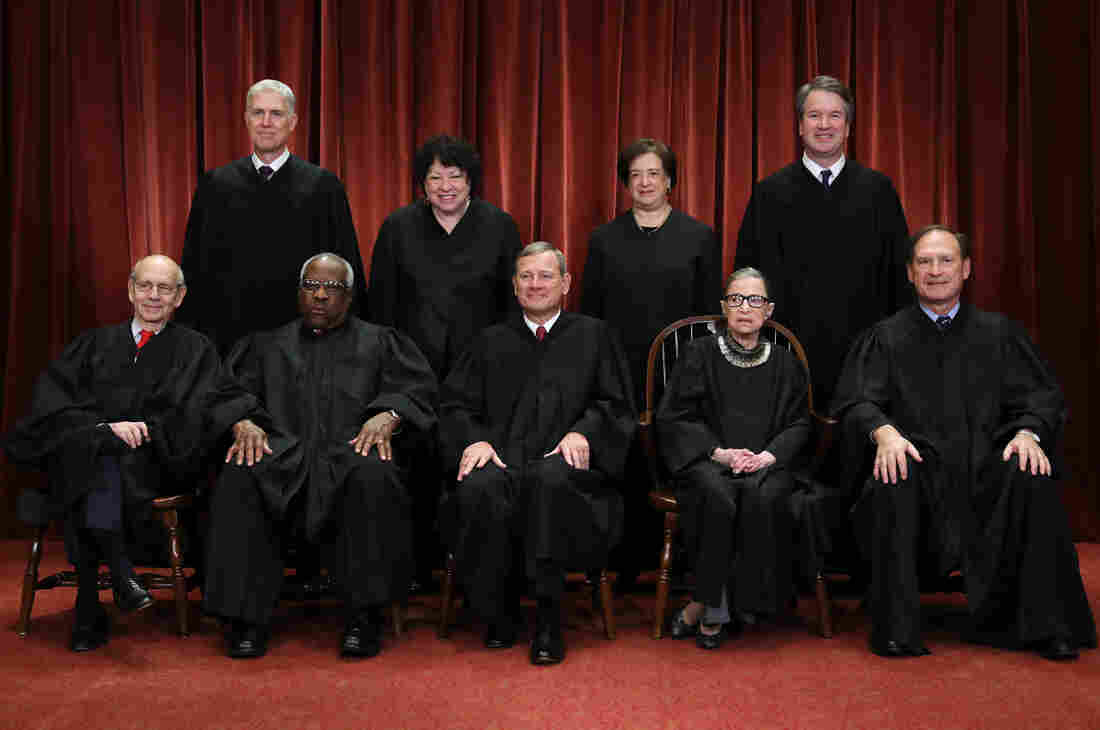 Although he maintained at his 2005 confirmation hearing that the memos he wrote advocating these positions merely reflected the views of his bosses, some of his superiors strongly disagreed with him. And ultimately, President Reagan signed the renewal of the Voting Rights Act into law.

That was a disappointment to Roberts, whose memos show a young man infuriated by what he saw then, and still sees now, as racial preferences in a variety of spheres. Take, for instance, the landmark 1965 Voting Rights Act that provided federal oversight of any changes in voting rules made by state and local governments with a history of racial discrimination in voting.

That provision was widely seen as the most effective piece of civil rights legislation since the period right after the Civil War. But in 2013, in a case from Shelby County, Ala., Roberts, as chief justice, wrote the court's 5-4 decision striking it down because Congress had not changed the original formula for determining which jurisdictions were covered.

As Roberts put it, "Our country has changed in the past 50 years." Black and white voters are now voting in roughly equal numbers, he asserted, and advance clearance of voting rule changes is no longer needed.

That proposition was quickly rebutted when many southern state and local governments, once free from the pre-clearance requirement, quickly enacted new laws and regulations that made it harder for African Americans and other minorities to vote — things like closing or moving polling places in minority areas, and limiting early voting.

Justice Ruth Bader Ginsburg all but forecast those results in her dissenting opinion in the case. "Throwing out pre-clearance when it has worked and is continuing to work to stop discriminatory changes," wrote Ginsburg, "is like throwing away your umbrella in a rain storm because you are not getting wet."

Author Biskupic says outright that the discriminatory consequences of Roberts' voting rights decision have been profound on the ground. "I think the consequences of Shelby County have been rather stark," she says.

If Roberts had any understanding of the practical impact of his decision, Biskupic suggests, it is trumped by his view that the pre-clearance requirement amounted to an unconstitutional racial preference.

Biskupic takes Roberts to task, as well, for disregarding more than a century of legal doctrine on race in order to put his long-held, contrary views, into place. His opinion in the voting rights case, she observes, is based on a "novel constitutional ground." It invokes the principal of "equal sovereignty," meaning that the states must be treated equally. But that principle, she says, is "at odds with the usual understanding of the Fourteenth Amendment." Indeed, she points out that the Reconstruction Act passed by Congress after the Civil War included a provision that barred Southern states from readmission to the Union unless they ratified the Fourteenth Amendment.

Far to the right on abortion and same-sex marriage

Roberts' views on other flash point social issues are similarly far to the right. According to Biskupic, at the Justice Department in the 1980s, Roberts was at the forefront of the effort to get the Supreme Court to overturn Roe v. Wade, the court's 1973 abortion decision. And on the court, he has never voted to invalidate an abortion restriction. That said, Roberts knows that the new conservative court majority doesn't have to overturn Roe to render it a hollow shell. If the court were to uphold all manner of abortion restrictions enacted in states where abortion is unpopular, the court would ensure that abortion is difficult, or even impossible to obtain in those states.

Similarly in the area of gay rights, while it seems unlikely that the court would reverse itself on gay marriage, the new conservative majority may well side with those who refuse, on religious grounds, to provide services to gay couples. After all, as Biskupic points out, John Roberts not only dissented in the same-sex marriage cases, it was the only time in his tenure as chief justice that he chose to read his dissent from the bench.

"From the dawn of human history until a few years ago for every people known to have populated this planet, marriage was defined as the union of a man and a woman," he began. "But today five lawyers [justices] have ordered every state to change its definition of marriage to one that matches a new one that they favor. Just who do we think we are."

Roberts, raised a conservative Catholic, has not changed, Biskupic writes: "At a time when American social attitudes were changing rapidly, John Roberts was not changing. Central to his personality was a certain constancy on many social issues."

The retirement of Justice Anthony Kennedy last June, and the appointment of Brett Kavanaugh to replace him, means that, as Biskupic puts it, Roberts "has the court he always wanted." Without Kennedy, Roberts has gained "greater control."

He is "no longer yoked to a centrist conservative pulling him to the left," she observes. He no longer "has to woo Kennedy, appease Kennedy, deal with Kennedy." Rather, "He's leading the court much more in his own image, and the law will likely be what he says it is."