Accessibility links
Michael Abels, Music Teacher Turned Jordan Peele's Go-To Composer Abels was a music teacher who had never scored a film when he was hired for Jordan Peele's Get Out and now Us. Peele hired him after a fruitless search for an African-American film composer. 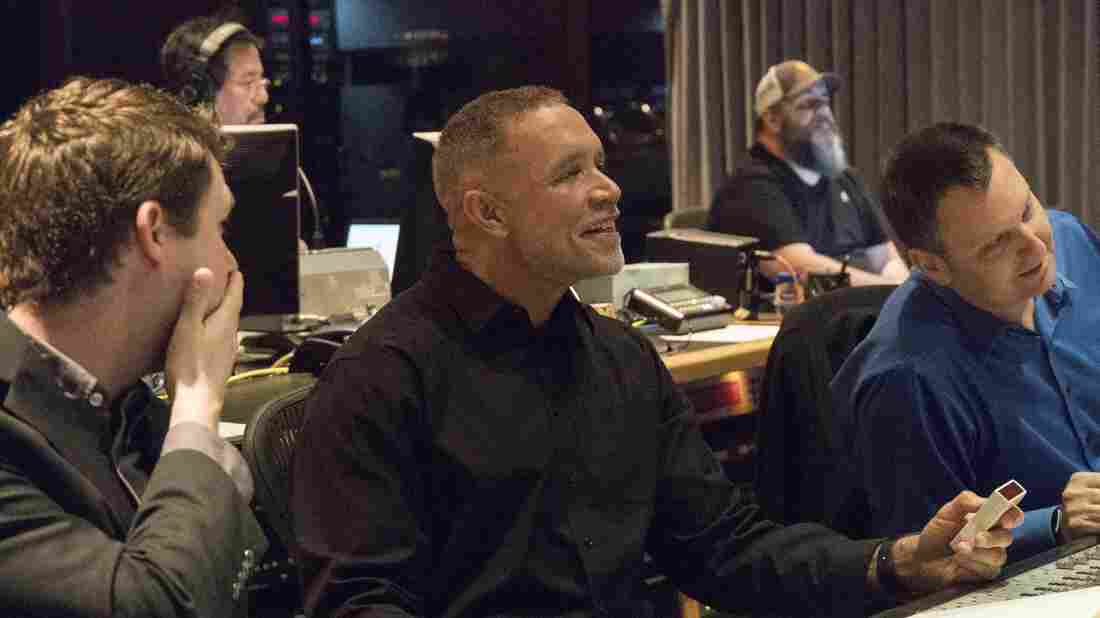 "His skill set is immense, and he has mastered many different genres of music," Jordan Peele says of composer Michael Abels (center). Suzanne Hanover/Universal hide caption 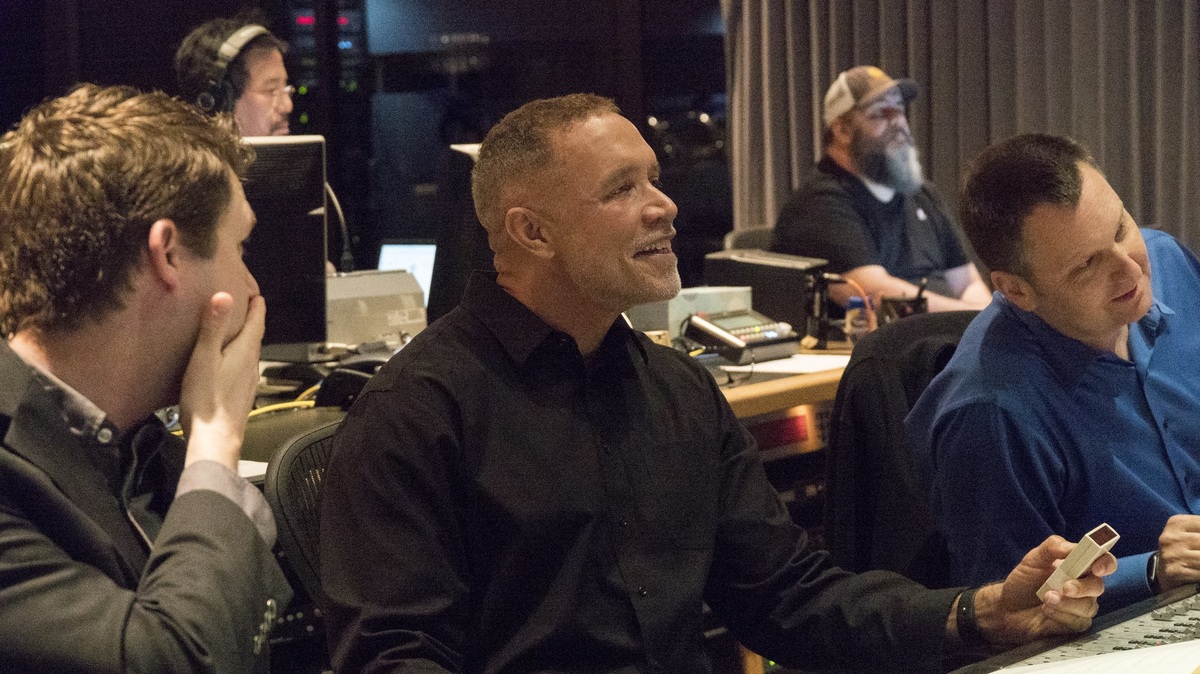 "His skill set is immense, and he has mastered many different genres of music," Jordan Peele says of composer Michael Abels (center).

Get Out may have been Michael Abels' first film score, but he's always known what makes music scary. "I actually have a memory of hearing 'In the Hall of the Mountain King' by Edvard Grieg when I was in a crib," Abels says, laughing. "And that piece terrified me."

After Get Out arrived in February 2017 — making 40 times its budget, becoming a cultural event and eventually earning an Oscar for best screenplay — writer-director Jordan Peele remembers getting a call from Steven Spielberg, who mentioned Michael Abels. "You've got to use him again," Spielberg said. "It's like me and John Williams." Peele was already planning to keep working with Abels, but that sealed it.

"His skill set is immense, and he has mastered many different genres of music," Peele says of Abels. "The best way for my movies to feel new and fresh is for the soundtrack to feel like something familiar, but also something that we've never heard before."

Abels was born in Phoenix and raised by his grandparents on their South Dakota farm. He was immediately interested in writing music and studied composition at the University of Southern California. Abels spent the past 30 years writing orchestral compositions, operas and commissions of all kinds.

In 2017, Abels was running the music department of a private school in Santa Monica when Peele went looking for an African-American film composer. There were disappointingly few in the industry, so Peele turned to YouTube where he found a live recording of a concerto for string quartet and orchestra called "Urban Legends." He tracked down the composer, and they met for coffee.

It's an inspiring Cinderella story, but it has darker undertones. After he graduated from USC in 1984, Michael Abels tried to find work scoring films but couldn't find any opportunities. It took decades for Abels' dream to come true.

For Get Out, Peele asked Abels to conjure the sound of "gospel horror." So the composer wrote a choral piece for the opening titles, where African-American voices sing warnings to the main character in Swahili. For Us, Michael Abels says it wasn't so much about creating a new genre of music, but about reflecting the film's underground-dwelling doppelgängers: the Tethered.

"There was a real need to convey the tortured emotions of those characters because they are us, and yet they're angry and mistreated," Abels explains. "So the score is a balance, I think, emotionally, between sheer terror and a sort of despair and empathy with what they're going through."

For the main titles of Us, Abels wrote a nonsense-language anthem for a chorus of children and adults. "The anthem really represents the spirit of the Tethered, and the uprising that they're about to stage. There's a group of people, and they're organized, and they're angry," he says.

The score for Us plays with the duality and mirror imagery in the film. Abels paired normal instruments, like a solo violin for the young girl, Zora (played by Shahadi Wright Joseph), with much more abnormal ones, like a cimbalom for Zora's Tethered counterpart, Umbrae.

"The film is really about individual characters confronting their own mirror images, so it's a very intimate, personal story," Abels says. "The score needed to feel like it was right with you, and not about invaders from another universe or something."

In addition to Us, Abels is scoring an upcoming Stefon Bristol-directed Netflix film called See You Yesterday and he recently co-founded the Composer Diversity Collective, which seeks to increase visibility for composers whom Hollywood has overlooked.

Peele says it's really Abels' heart that makes him a great horror scorer. "Michael's a man of immense empathy — very soft-spoken, a very sweet person, very loving," Peele says. "I think that the best horror is created by those who are in touch with their empathetic side. And that's him."