Accessibility links
Neighbors Welcome, Fight Massive New Solar Farm In Northern Virginia As demand for solar energy continues to grow in the Eastern U.S., the fight over a massive solar farm in Virginia is a harbinger of conflicts to come. 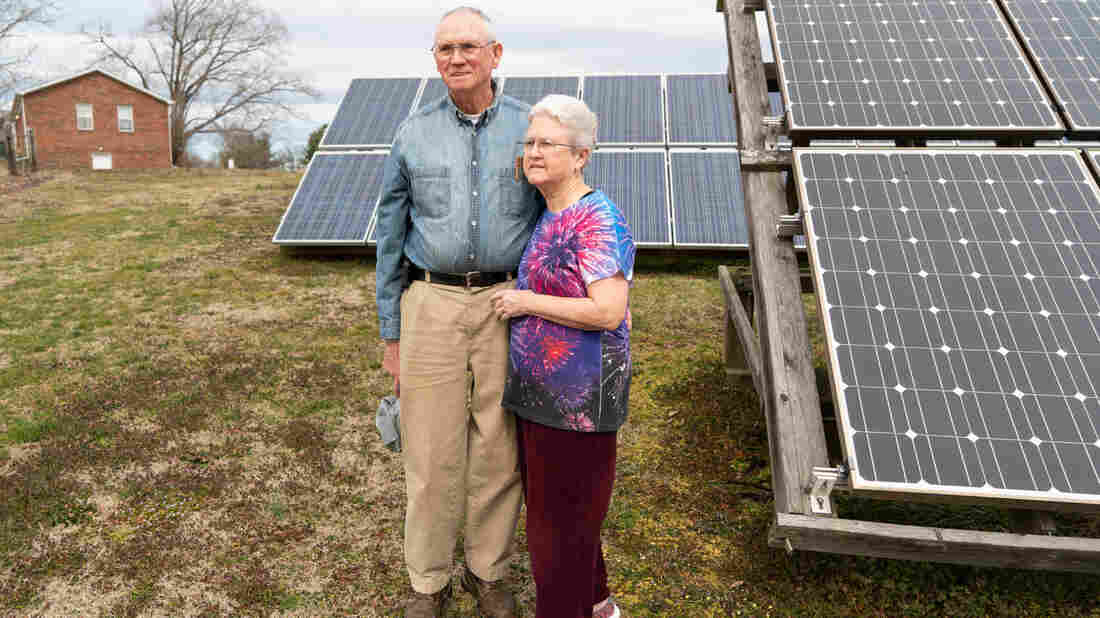 Daniel and Helen Pemberton support the huge solar farm planned in Spotsylvania County. They already have 40 solar panels in their own yard. Jacob Fenston/WAMU hide caption 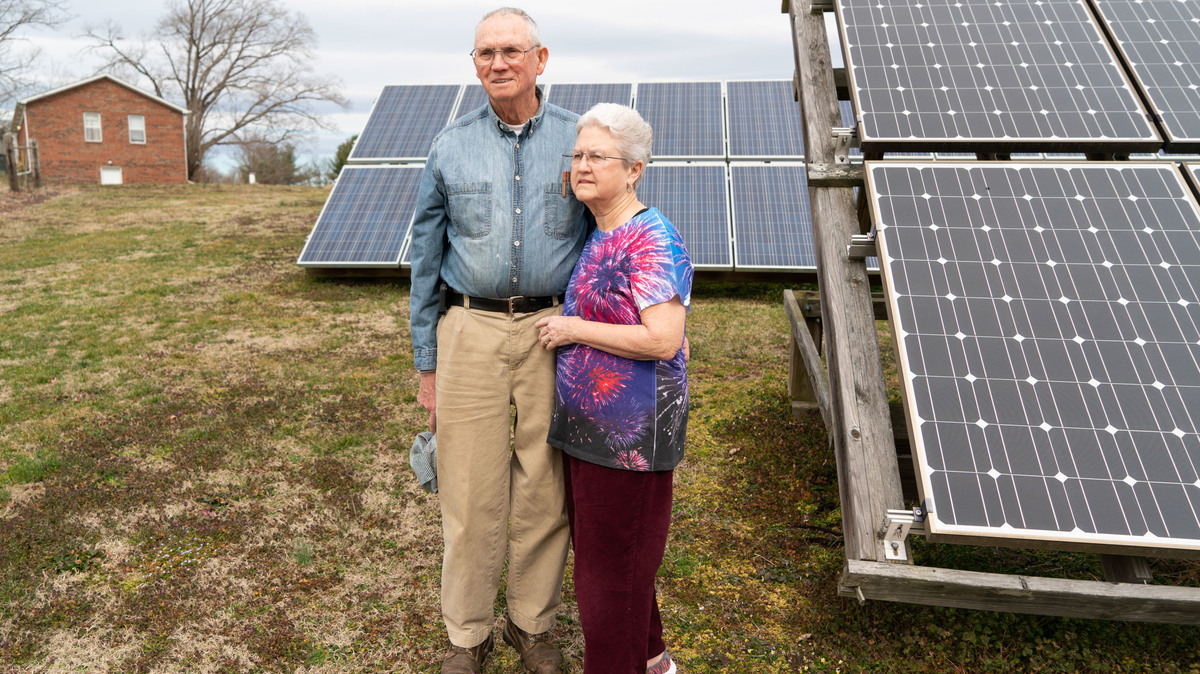 Daniel and Helen Pemberton support the huge solar farm planned in Spotsylvania County. They already have 40 solar panels in their own yard.

The largest solar farm east of the Rocky Mountains could soon be built in Virginia and, depending on whom you ask, it would be either a dangerous eyesore that will destroy the area's rural character or a win-win, boosting the local economy and the environment. The solar panels would be spread across 10 square miles — 1.8 million panels soaking up the sun's rays.

The project is planned for Spotsylvania County, about 60 miles south of Washington, D.C. Amid the county's Civil War battlefields, farms and timberland, a fight is raging over the future of energy in Virginia, and in the Eastern U.S.

The heart of the solar resistance is in a gated community called Fawn Lake, built around a golf course and man-made lake.

It's not in keeping with the type of setting that people bought houses here [for] — they wanted to be out in the woods, essentially.

"I mean we live at a resort, essentially," says Dave Walsh, one of the many Fawn Lake residents organizing against the planned solar farm. One corner of the massive project would butt up against the back of the gated community. Walsh says he supports solar, in theory, but not here.

"It's not in keeping with the type of setting that people bought houses here [for] — they wanted to be out in the woods, essentially," Walsh says.

"This is just the wrong scale," says Fawn Lake resident Kevin McCarthy, who has helped organize residents in a group called Concerned Citizens of Spotsylvania. "If you want to start solar in Spotsylvania, we should start small." Opponents also worry the project would make their property values plummet.

Supporters, on the other hand, point to the millions of dollars in tax revenue the project would generate over its 35-year life span. It would create $17 million in revenue, according to the company proposing the solar farm, compared with the $1 million that would be paid by the current landowner, a timber company that logs the land.

This local fight has gained national attention, with stories on Fox News and a mention by Fox host Sean Hannity. Hannity linked the project to the Green New Deal proposed by Democrats in Congress (even though the solar project was in the works well before the election of Green New Deal architect Rep. Alexandria Ocasio-Cortez, D-N.Y.)

The vitriol of national politics seems to have infected local political debates about the solar project in Spotsylvania County. The state has already approved it — now it's up to the county's board of supervisors, but it has repeatedly put off voting. Meetings have dragged late into the night, and they've gotten heated.

Supervisor Greg Benton, who represents Fawn Lake on the board, says the fierce opposition took him by surprise — initially, he thought it would be the easiest decision he would ever make: The project would use almost no county services, while generating millions in revenue. Instead, he has been deluged with emails and letters. "Just stacks and reams of paper," he says.

Solar demand is growing in the East

Solar has taken off in Virginia over the past five years — the total solar output in the state has increased from just 17 megawatts in 2014 to more than 320 megawatts as of August 2018. A private developer called sPower is behind the 500-megawatt solar project — most of the energy will be sold to Microsoft to power its enormous cloud data centers nearby. 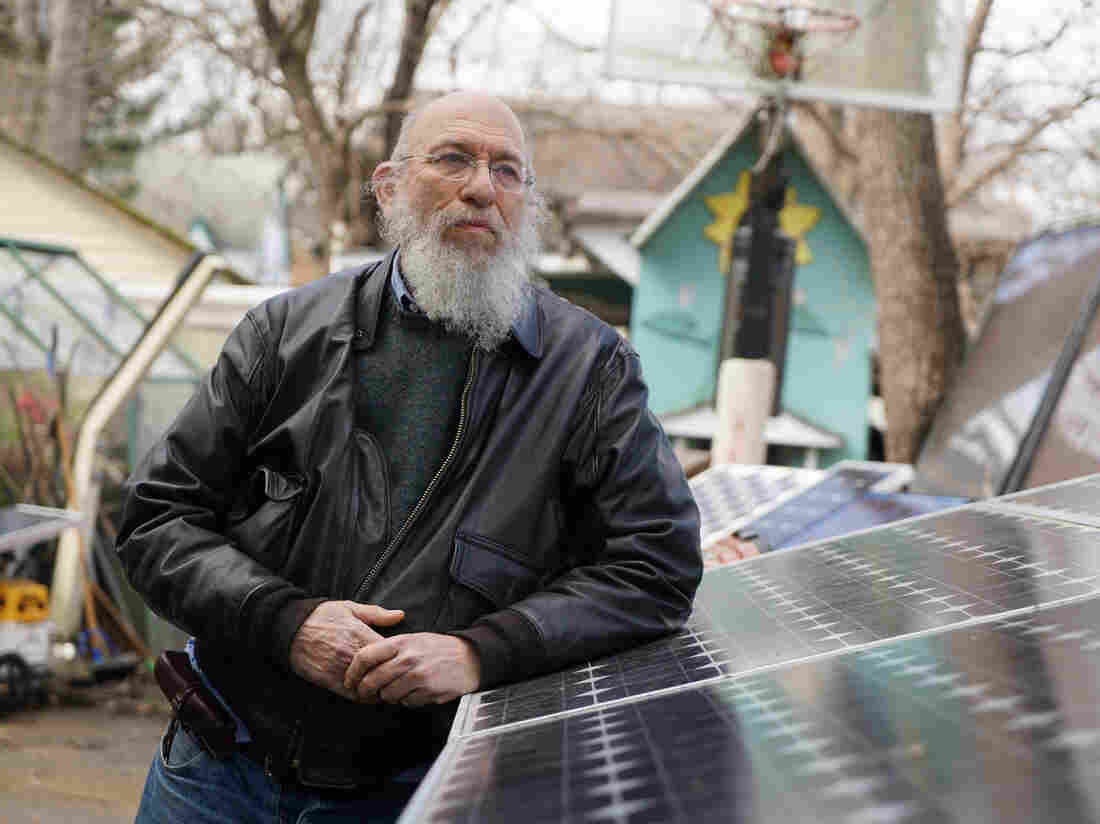 Solar guru Scott Sklar of George Washington University lives in Arlington, Va., in a home powered by solar and wind. The demand for solar power will only increase, he says. Jacob Fenston/WAMU hide caption 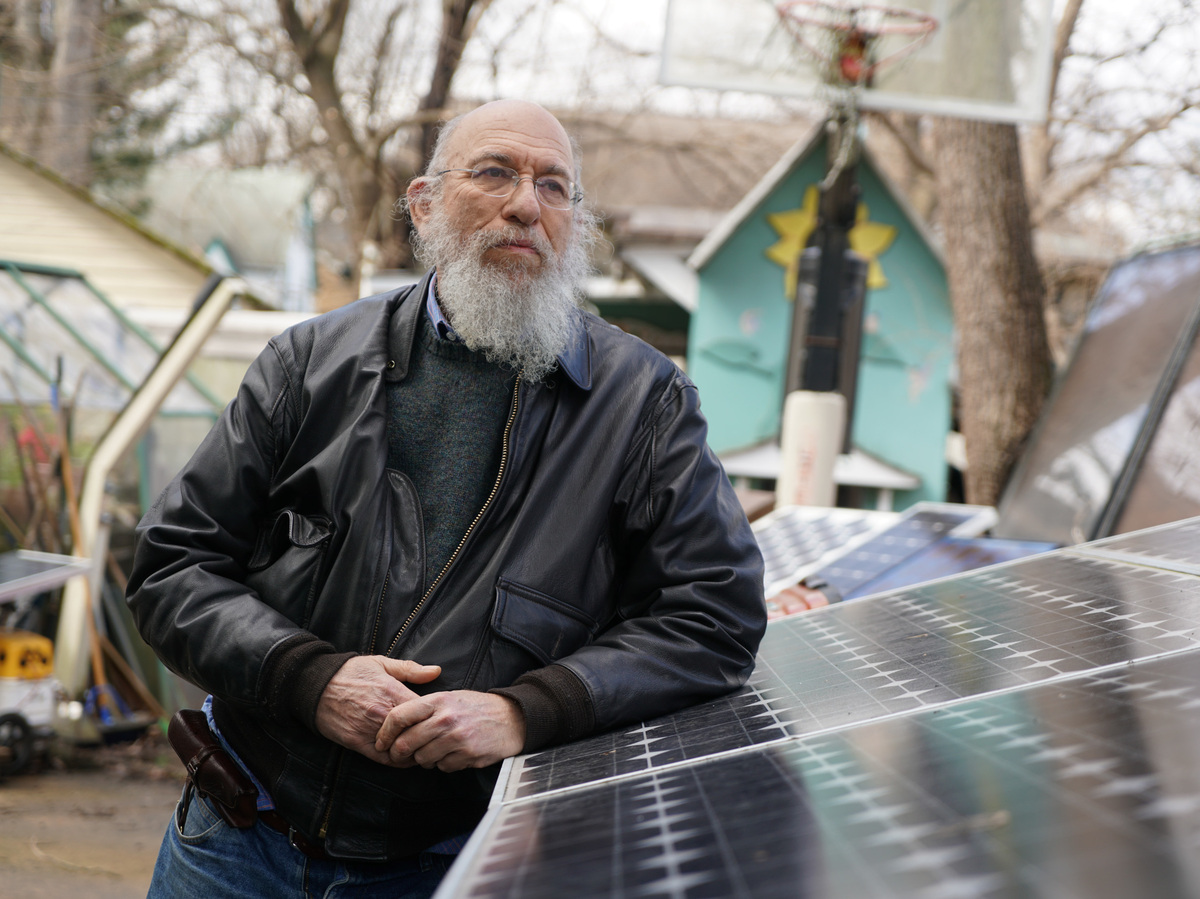 Solar guru Scott Sklar of George Washington University lives in Arlington, Va., in a home powered by solar and wind. The demand for solar power will only increase, he says.

The demand is driven in part by corporations like Microsoft looking for renewable energy sources. Amazon has six large solar farms around the state. It is also driven by demand from the government: Last year the Virginia General Assembly passed legislation aiming to increase solar capacity in the state to 5,000 megawatts.

Demand for solar will only grow, says Scott Sklar, who directs the Environmental and Energy Management Institute at George Washington University. "This is the start. This is the harbinger of what I call a real maturing industry now," says Sklar, who has been involved in solar since the 1970s.

As solar continues to spread, conflicts like those in Spotsylvania will become ever more frequent. Opponents have some valid concerns, Sklar says, but they are things that can be addressed through the approval process — for example, increasing the size of forested buffers to hide the project.

"You really have to look at the bigger picture here," says Sklar, referring to climate change. "If you do not move in this pathway fast and ambitiously you are going to have way more problems than having some gleaming solar panels."

Climate scientists with the U.N.'s Intergovernmental Panel on Climate Change say we have just a decade or so to drastically reduce carbon emissions to prevent some of the worst of global warming.

How green is green?

Solar opponents in Spotsylvania say the "green" technology is actually bad for the environment — causing the loss of acres of carbon-reducing trees. In fact, thousands of acres have already been clear-cut in preparation for the project.

"They cut every tree down except for where the border line is for the property," says Michael O'Bier, who lives right next to the project.

It's a great blessing; it's a blessing for the whole county.

Once the project is finished, O'Bier's property will be separated from solar panels by at least 100 feet, which will be replanted with trees and vegetation. According to sPower, the vast majority of neighbors will not be able to see the solar panels.

Support for the solar farm has been less vocal than the opposition, but 67 percent of county residents actually favor the project, according to a poll commissioned by sPower, while just 26 percent oppose it.

"The people in the Fawn Lake area, they've put out this false information, and some people in the county believe it," says Daniel Pemberton, a lifelong Spotsylvanian who lives several miles from the proposed site. He and his wife, Helen, have 40 solar panels in their backyard. In a sunny year, the panels cover all the couple's electricity needs. Pemberton says he would love to have the sPower solar project right next door. "I'd rather have the panels here than homes," he says, pointing at the open fields neighboring his property.

"It's a great blessing; it's a blessing for the whole county," says Helen.

David Wilson lives on 11 acres, right next door to the sPower project. While some — including O'Bier — say they will leave if the project happens, Wilson says he will leave if it doesn't.

Wilson moved to Spotsylvania from D.C. 26 years ago. "From Washington, D.C., this was the first place I came to where there was actually affordable land," he says. Now his neighbor, a timber company, wants to sell. "So I started weighing the differences — what's going to happen here in my backyard?" Wilson is neither a liberal nor or a big solar advocate, he says, but he would rather have solar panels next door than a housing development.

"You wouldn't be in the country anymore. Then you'd be back into another urban jungle, basically."