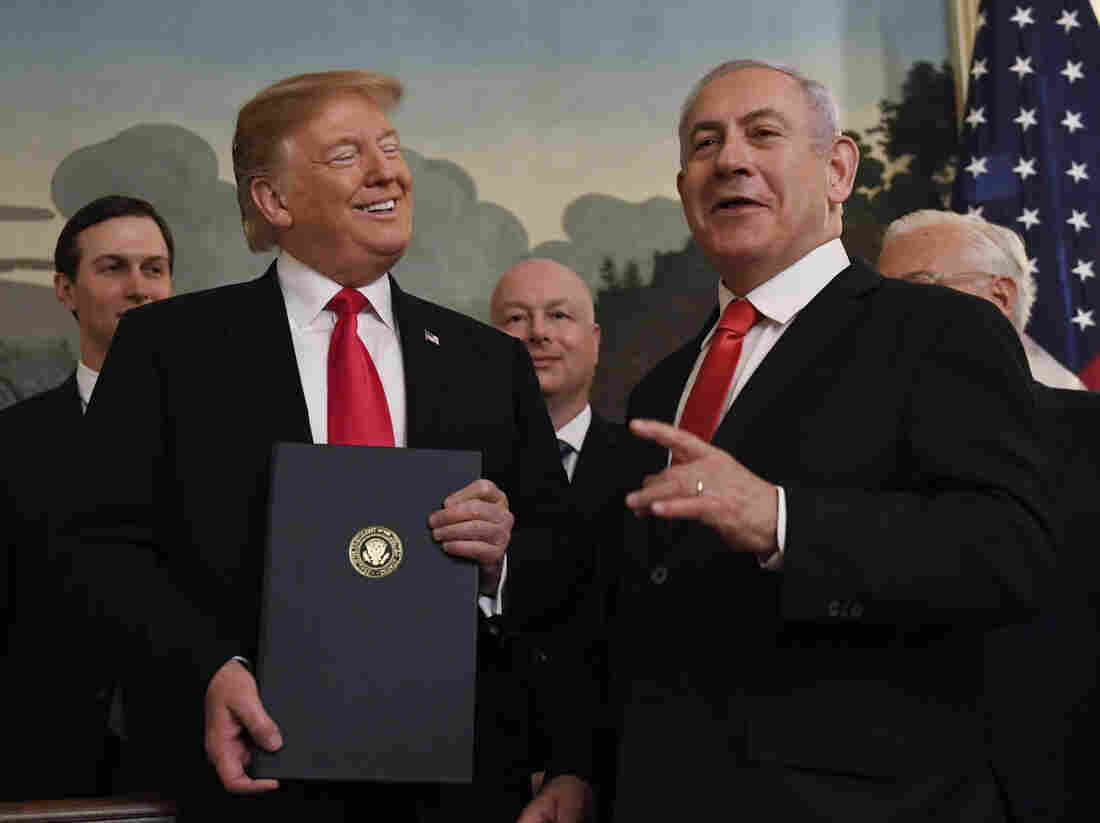 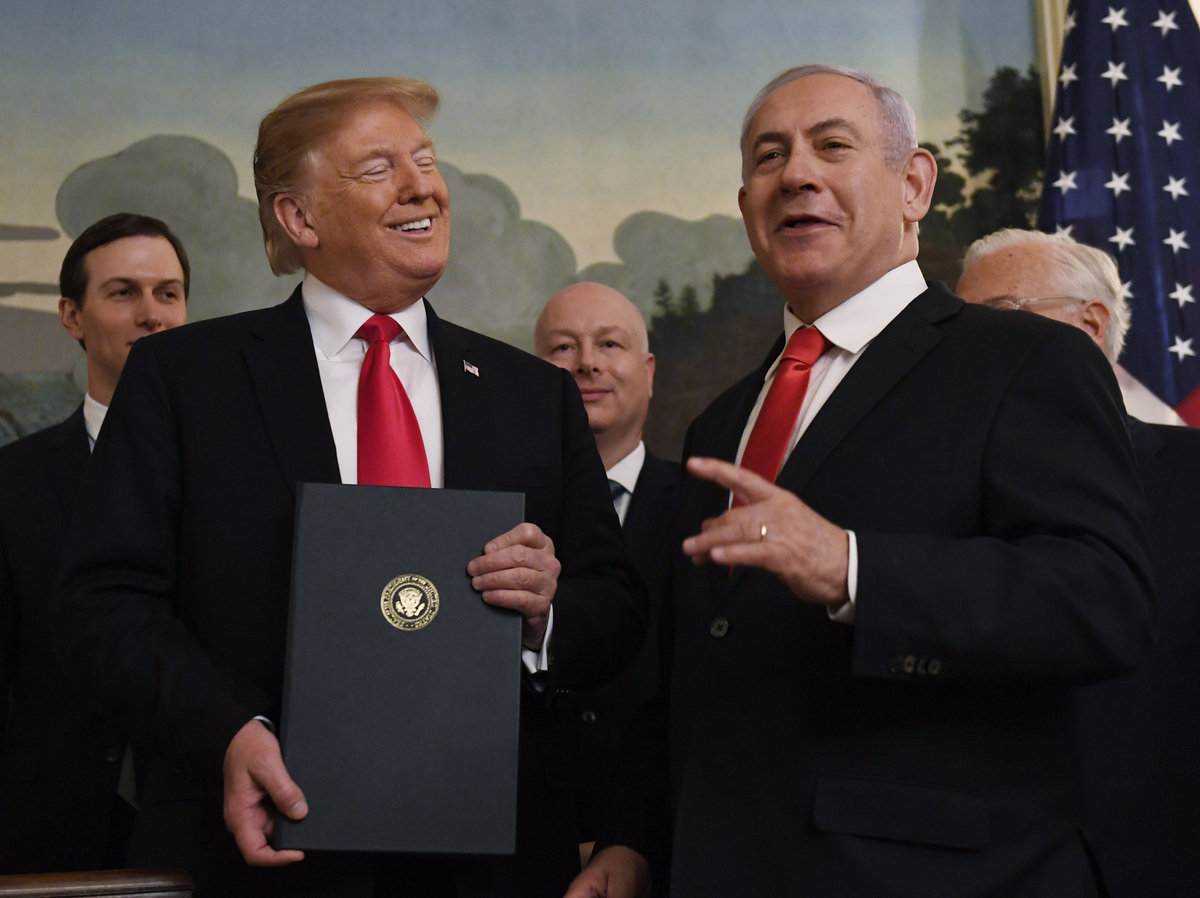 President Trump stands with Israeli Prime Minister Benjamin Netanyahu during a ceremony to sign a proclamation recognizing Israel's sovereignty over the Golan Heights, on Monday.

Israeli Prime Minister Benjamin Netanyahu was with Trump at the White House as he signed the presidential proclamation. Prior to the signing, Netanyahu made remarks lavishing praise onto Trump that drew comparisons between the president and the Persian emperor Cyrus as heroic defenders of the Jewish people.

"Israel has never had a better friend than you," Netanyahu said, enumerating several instances in which the administration has delivered on campaign promises favoring the Israeli leader, including U.S. withdrawal from the nuclear deal with Iran, restoration of sanctions on that country and the recognition of Jerusalem as Israel's capital leading to the relocation of American embassy there.

"This is truly an historic day," Netanyahu exclaimed, saying it has taken half a century "to translate our military victory into a diplomatic victory."

"Your recognition is a two-fold act of historic justice. Israel won the Golan Heights in a just war of self-defense, and the Jewish people's roots in the Golan go back thousands of years," he added.

Following the signing, Trump said, "This was a long time in the making."

The latest move reverses the position U.S. administrations have held for more than 50 years, when Israel captured the Golan Heights from Syria during the 1967 Six-Day War. The region was annexed by the government in 1981, officially making it part of Israel and serving as a strategic military and agricultural post.

Netanyahu called the high ground "invaluable" to the national security of the nation, as did Trump's proclamation.

"Today, aggressive acts by Iran and terrorist groups, including Hizballah, in southern Syria continue to make the Golan Heights a potential launching ground for attacks on Israel. Any possible future peace agreement in the region must account for Israel's need to protect itself from Syria and other regional threats. Based on these unique circumstances, it is therefore appropriate to recognize Israeli sovereignty over the Golan Heights," the document reads.

The decree puts the U.S. at odds with much of the international community, which considers the Golan occupied territory.

Syria's Foreign Ministry rejected Trump's decision to legitimize Israel's claim over the contested land, calling it "a flagrant aggression of the sovereignty and territorial integrity of the Syrian Arab Republic, turning a blind eye to all international reactions that condemned such resolution," according to an official interviewed by the Syrian Arab News Agency.

"The US president has no right or legal capacity to legalize the occupation or usurp the others' land by force... and this US hostile policy makes the region and the world subject to all dangers," the official said.

UN Secretary-General António Guterres said it is "clear that the status of Golan has not changed," UN spokesman Stephane Dujarric said on Monday, Reuters reported.

"The UN's policy on Golan is reflected in the relevant resolutions of the Security Council and that policy has not changed," Dujarric said.

Critics, including the U.N., contend U.S. recognition of Israel's control over the disputed Golan is an irreversible break from the long-held principle of territorial integrity, prohibiting the acquisition of territory by war, that will inevitably have global consequences; they argue it weakens America's ability to oppose Russia's annexation of Crimea, as well as, pave the way for the Trump administration to recognize any future Israeli annexation of the West Bank.

The timing of the policy shift comes at an opportune time for Netanyahu, who faces a difficult election on April 9 and has been lobbying the Trump administration for several weeks to recognize the Golan as Israeli territory.

As NPR's Daniel Estrin reported, "This Golan decision is a political gift for Netanyahu."