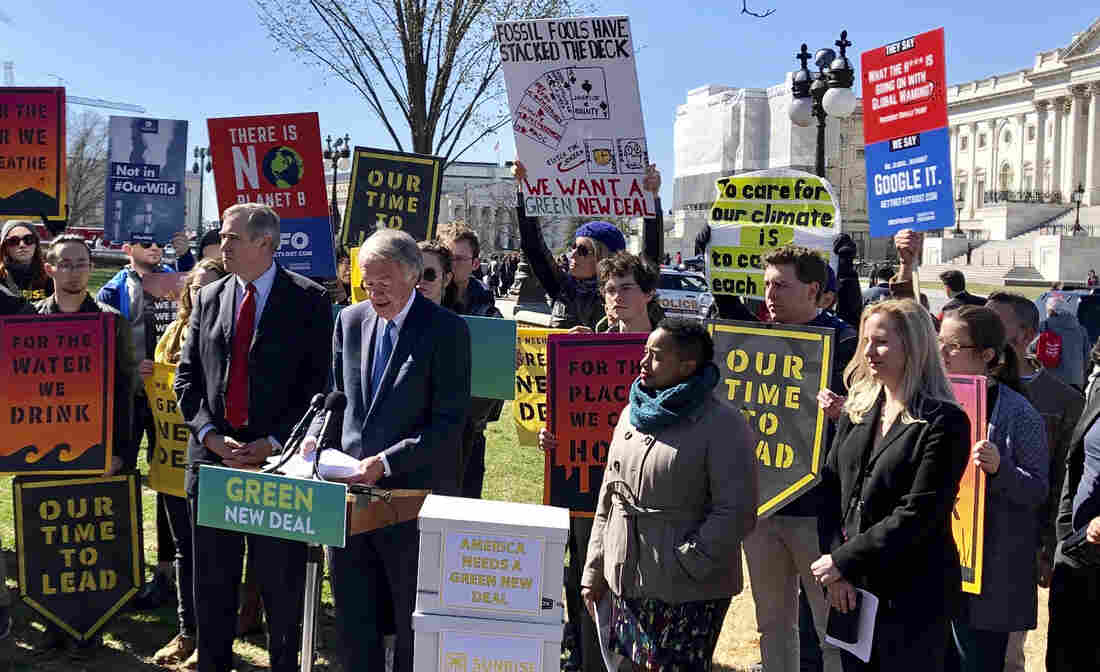 Sen. Edward Markey, D- Mass., speaks at a rally for the Green New Deal on Tuesday outside the Capitol in Washington. The deal failed to advance in the Senate. Matthew Daly/AP hide caption 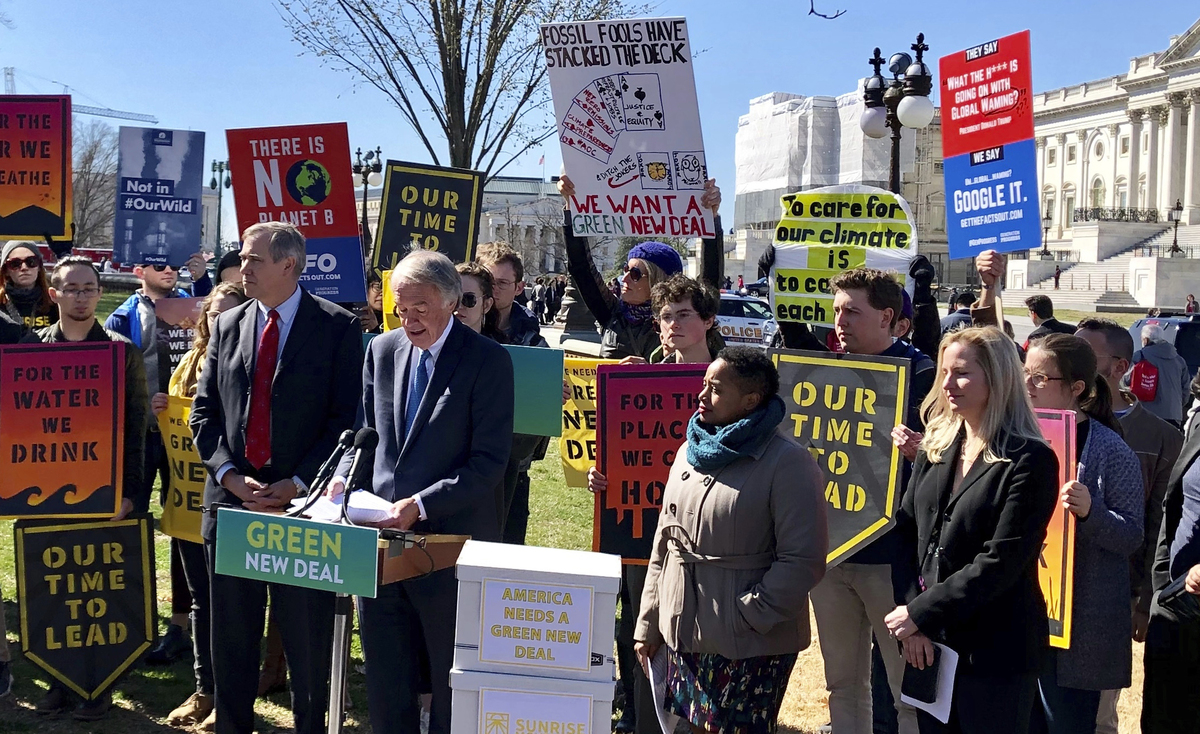 Sen. Edward Markey, D- Mass., speaks at a rally for the Green New Deal on Tuesday outside the Capitol in Washington. The deal failed to advance in the Senate.

The Senate failed to move forward with Democrats' "Green New Deal," but the partisan clash over the controversial environmental plan is likely to be a continuing theme ahead of the 2020 election.

The measure needed 60 votes to advance but was blocked when all Senate Republicans and four Senate Democrats opposed it. The rest of the chamber's Democrats voted "present."

Senate Republicans forced a vote on the proposal Tuesday as part of an ongoing effort to turn the provocative climate change resolution into a wedge issue in the 2020 elections. Democrats say the GOP gambit carried its own political risk of mocking an issue that is a priority for a growing number of Americans.

"I think it's a real stupid political move for them to show how cavalier they are about climate change by playing games with the Green New Deal," said Sen. Chris Murphy, D-Conn., ahead of the vote. "If they don't like the Green New Deal, fine, put up your own idea. It smells so disingenuous, especially to young voters. I think it's a really dumb move for them to mess around with this."

All 53 Republicans oppose the Green New Deal. Most Democrats decided on a strategy to vote present led by Minority Leader Chuck Schumer, D-N.Y. "I'm for it, but I have no problem voting 'present,' " said Murphy. Schumer wants Democrats to run more aggressively in favor of climate change policies going into 2020, although he conceded in an interview with The New York Times earlier this month that the exact legislative form that will take is still up for debate. "It's going to take us a little while to come up with a consensus that works," he said.

Senate Majority Leader Mitch McConnell, R-Ky., announced last month that he would put the resolution authored by New York Democratic freshman Rep. Alexandria Ocasio-Cortez and Sen. Ed Markey, D-Mass., up for a vote. Republicans are trying to elevate the freshman lawmaker, who has described herself as a democratic socialist, and her ideas as emblematic of the Democratic Party going into 2020.

"In recent months our nation has watched the Democratic Party take a sharp and abrupt left turn toward socialism," McConnell said earlier this month. "A flawed ideology that has been rejected time and again across the world is now driving the marquee policy proposals of the new House Democratic majority, and nothing encapsulates this as clearly as the huge, self-inflicted, national wound the Democrats are agitating for called the Green New Deal."

The National Republican Senatorial Committee has also started using Ocasio-Cortez in attack ads similar to the way the party campaigns have run against House Speaker Nancy Pelosi, D-Calif., for years. In a recent tweet attacking Rep. Joaquin Castro, D-Texas, who is considering a run against Republican Sen. John Cornyn, the NRSC said Castro "votes with AOC 94% of the time." Castro is a co-sponsor of the Green New Deal. House Republican candidates are also using Ocasio-Cortez and the Green New Deal in attack ads, like this one released Monday by former Rep. Karen Handel, R-Ga., who lost in 2018 and is seeking a rematch for a suburban Atlanta district.

The Green New Deal is a loose set of ambitious goals outlined in a nonbinding resolution that calls for a global goal of achieving net zero carbon emissions by 2050 — but no policy specifics on how to get there.

It is also an economic plan, which calls for massive federal investment, enhancing the social safety net, and millions of new jobs to overhaul the energy and infrastructure industries in the U.S.

Critics have seized on the resolution's call for a "10-year national mobilization" to work toward a series of goals including "meeting 100 percent of the power demand in the United States through clean, renewable, and zero-emission energy sources."

But even some of its sponsors, like Minnesota Democratic Sen. Amy Klobuchar, don't regard that marker as a hard deadline, instead saying the resolution is "aspirational."

Amy Klobuchar Runs On A Record Of Accomplishments — Including With Republicans

Republicans on Capitol Hill have also seized on a series of talking points Ocasio-Cortez's office accidentally circulated about the resolution that included financial support for Americans "unwilling to work" and for policies like building out high-speed rail so "air travel stops becoming necessary." Her office said it was an old, working draft that was not intended for circulation, but it was a self-inflicted political hit that gave critics an easy line of attack.

Senate Republicans have been attacking the Green New Deal for weeks. "To put it mildly the Green New Deal is ambitious. To frame it more accurately, it is an unworkable pie-in-the-sky attempt to reshape every aspect of everyday Americans' lives," Sen. Chuck Grassley, R-Iowa, said on the Senate floor.

Conservatives have rallied around an analysis by the right-leaning American Action Forum that estimates the Green New Deal would cost between $51 trillion and $93 trillion over a 10-year period. Senate Republicans are framing it as an expensive government takeover of American life as it exists today. "This Green New Deal — this big government takeover of the economy — it is masked as an environmental proposal. To me, it is radical," said Sen. John Barasso, R-Wyo.

The GOP strategy is intended to divide Democrats, but senators have offered a collective shrug at McConnell's vote strategy. "The people are on our side as it relates to climate change and I think there's no reason to be defensive about what we want to accomplish," said Sen. Brian Schatz, D-Hawaii. "Republicans have no plan at all as it relates to climate change, and that's not a rhetorical flourish, that's not a partisan statement. They literally have no bill and they have no plan. They're just sort of goofing around."

But at least one Senate Republican, Lamar Alexander of Tennessee, is offering a counterproposal to combat climate change, which he called "a New Manhattan Project for Clean Energy" in a Monday Senate floor speech. It is a five-year plan that includes 10 "Grand Challenges" to reduce carbon emissions and create cleaner energy sources. "I believe climate change is real. I believe that human emissions of greenhouse gases are a major cause of climate change," Alexander said. "And I believe the Democrat cure for climate change, their 'Green New Deal,' is so far out in left field that no one is going to take it seriously." Alexander is not seeking re-election in 2020.

Democrats' "present" vote strategy had the support of climate change activists, including the nascent Sunrise Movement, a coalition of young activists who have recently been storming lawmakers' offices on Capitol Hill in support of the Green New Deal. A spokesman for the group told NPR the Senate vote was "a sham."