Accessibility links
'Empire' Actor Jussie Smollett's Charges Dropped In Move That Angers Police The Empire actor was accused of filing a false report of a hate crime. Now, the decision to drop the charges has exposed a stark fault line between Chicago authorities and state and county officials. 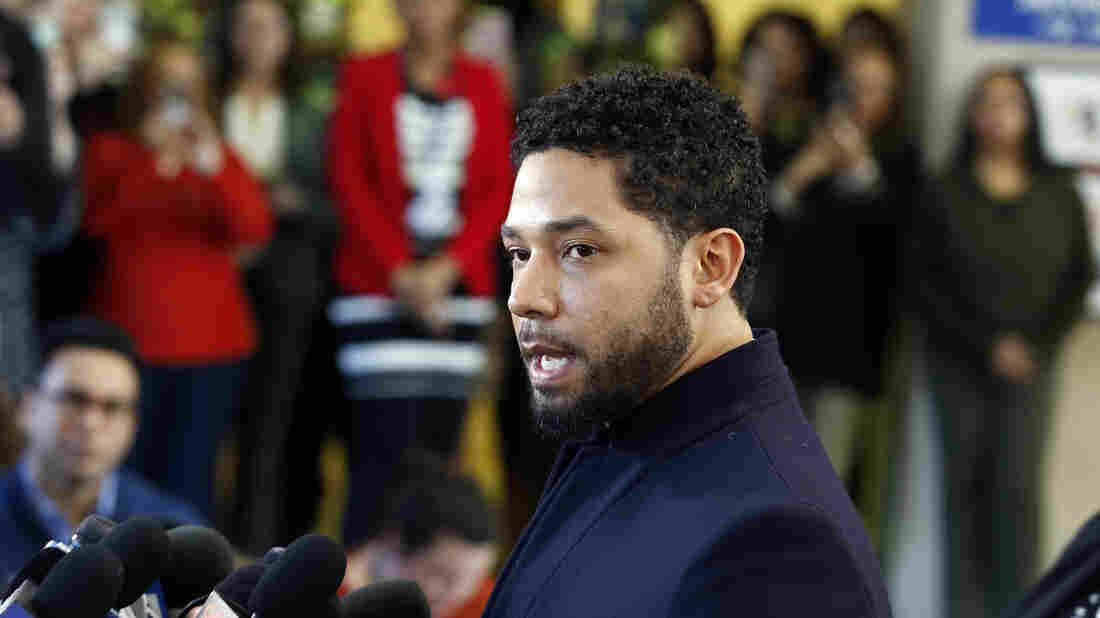 Jussie Smollett addresses the media after appearing in a Chicago courtroom on Tuesday. The Empire actor reasserted his innocence after prosecutors dropped the charges against him, but Chicago police are upset with the decision. Nuccio DiNuzzo/Getty Images hide caption 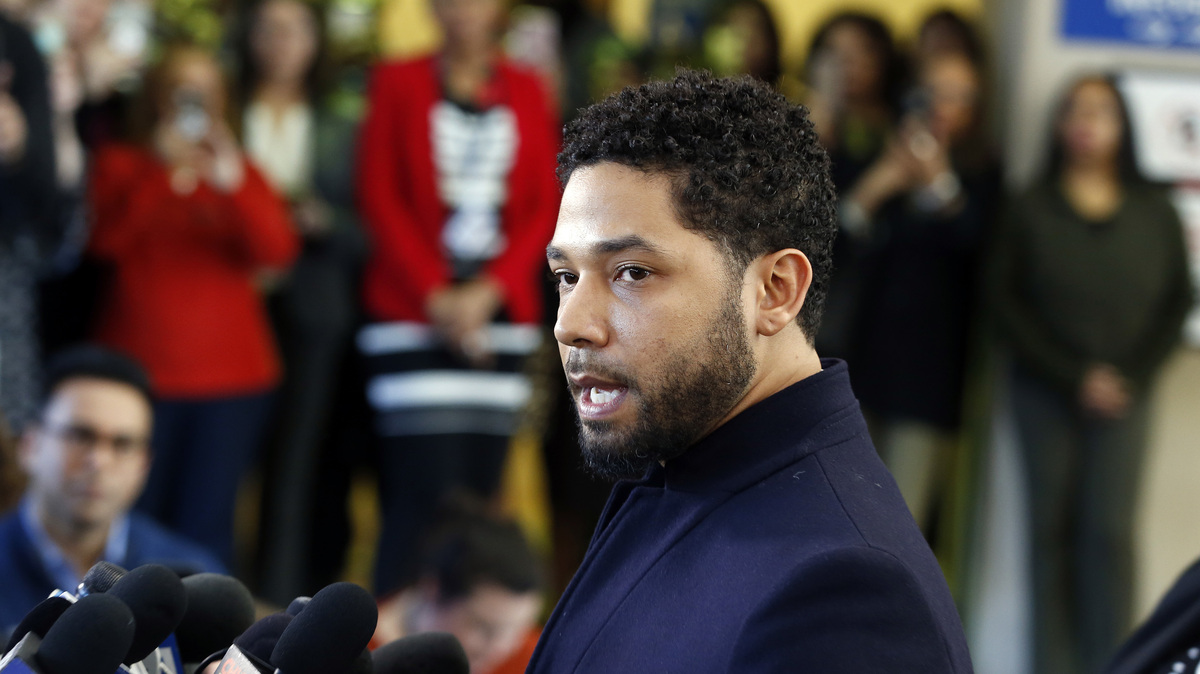 Jussie Smollett addresses the media after appearing in a Chicago courtroom on Tuesday. The Empire actor reasserted his innocence after prosecutors dropped the charges against him, but Chicago police are upset with the decision.

Prosecutors are dropping all charges against Empire actor Jussie Smollett in a surprising and controversial move that has exposed a stark fault line between Chicago's local authorities and their county and state counterparts. The decision Tuesday appears to clear Smollett of allegations that he filed a false police report earlier this year when the actor, who is gay and black, claimed that he was attacked in Chicago in a possible hate crime.

Prosecutors in Cook County, Ill., said they would not pursue the grand jury indictment against Smollett, which returned 16 felony counts of disorderly conduct against him. Tuesday's decision, according to the Cook County State's Attorney's Office, had to do, in part, with the actor's community service and bond payment to the city.

"After reviewing all of the facts and circumstances of the case, including Mr. Smollet[t]'s volunteer service in the community and agreement to forfeit his [$10,000] bond to the City of Chicago, we believe this outcome is a just disposition and appropriate resolution to this case," the office led by State's Attorney Kim Foxx said in a statement emailed to NPR.

Foxx recused herself from the Smollett investigation last month to "address potential questions of impartiality based upon familiarity with potential witnesses in the case," according to a statement released at the time. First Assistant State's Attorney Joseph Magats, who took over on her behalf, said the decision should not necessarily be viewed as an exoneration.

The city's police and mayor vehemently disagree with the move, however.

The Allegations Against Jussie Smollett

At a news conference called after the announcement, Mayor Rahm Emanuel, together with police Superintendent Eddie Johnson, railed against it as a "whitewash of justice."

"It is not on the level, from beginning to end," a visibly angry Emanuel told reporters. "There needs to be a level of accountability throughout the system, and this sends an unambiguous message that there is no accountability. And that is wrong."

Last month, during a lengthy statement to the media, Johnson explained the allegations: that Smollett paid two brothers to carry out a fake attack against him — involving racial and anti-gay slurs and a rope around his neck — and that Smollett filed a police report to that effect, all in an attempt to "further his own public profile."

Here is the proffer that was red in court in Jussie Smollett case. @cbschicago pic.twitter.com/3tVQkw6JDy

The police superintendent still stands by those accusations.

"I've been a cop now for about 31 years, and when I came on this job, I came on with my honor, my integrity and my reputation," Johnson said Tuesday. "If someone accused me of doing anything that would circumvent that, then I would want my day in court, period — to clear my name.

"I've heard that they wanted their day in court with TV cameras so America could know the truth," he added, "and now they chose to hide behind secrecy and broker a deal, to circumvent the judicial system."

Mayor Rahm Emanuel: “This is without a doubt a whitewash of justice.” pic.twitter.com/dHwwJpdZDR

Smollett's attorneys, for their part, celebrated the decision to drop the charges as a vindication. They say the actor's record has been "wiped clean of the filing of this tragic complaint against him."

"He was a victim who was vilified and made to appear as a perpetrator as a result of false and inappropriate remarks made to the public causing an inappropriate rush to judgement," attorneys Tina Glandian and Patricia Brown Holmes said in a statement released by a spokesperson.

"Jussie and many others were hurt by these unfair and unwarranted actions," they continued. "This entire situation is a reminder that there should never be an attempt to prove a case in the court of public opinion. That is wrong. It is a reminder that a victim, in this case Jussie, deserves dignity and respect. Dismissal of charges against the victim in this case was the only just result."

Not long after his arrest in February, the actor was removed from the final episodes of Empire's season — "to avoid further disruption on set," the show's producers said at the time. 20th Century Fox Television, the company behind the show, issued a brief statement after Tuesday's announcement.

"Jussie Smollett has always maintained his innocence and we are gratified that all charges against him have been dismissed," the company said in its statement to NPR.

Smollett himself reasserted his innocence at a news conference after his hearing.

"I've been truthful and consistent on every single level since day one. I would not be my mother's son if I was capable of one drop of what I was being accused of," he said, in his first public comments since an interview last month with ABC News.

"This has been an incredibly difficult time — honestly, one of the worst of my entire life. But I'm a man of faith and I'm a man that has knowledge of my history, and I would not bring my family, our lives or the movement through a fire like this."