Accessibility links
Review: FX Series 'What We Do In The Shadows' Doesn't Suck The U.S. adaptation of the hilarious 2014 New Zealand mockumentary about vampire roommates infuses the film's dry-as-gravedust humor into new characters and strong storylines. 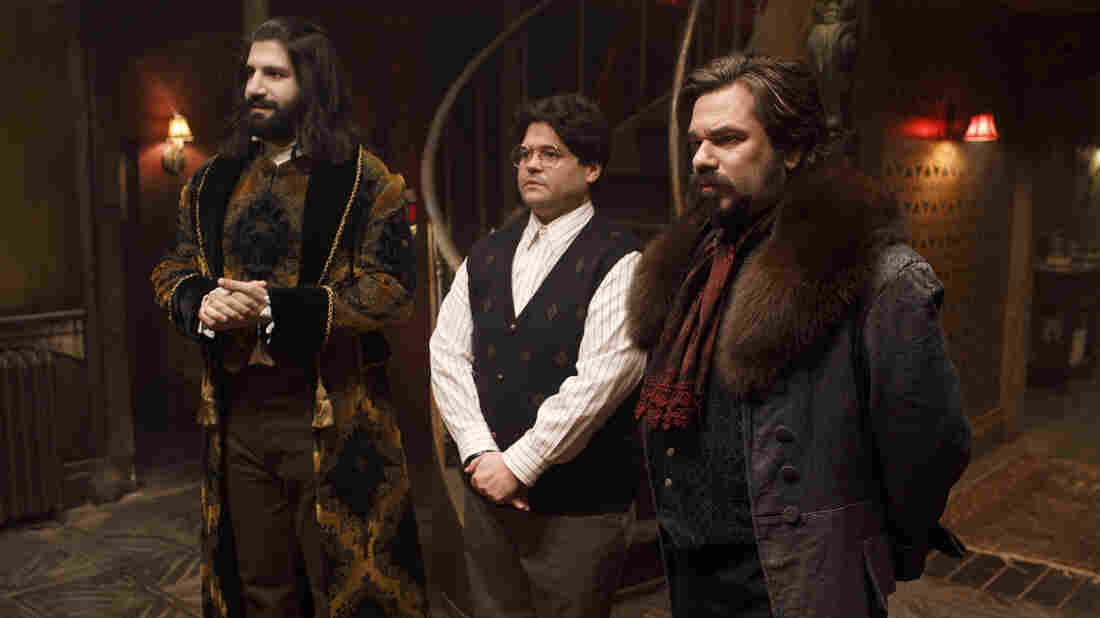 Protect Ya Neck: Nandor (Kayvan Novak), Guillermo (Harvey Guillen) and Laszlo (Matt Berry) receive visitors in the FX series, What We Do In The Shadows. John P. Johnson/FX hide caption 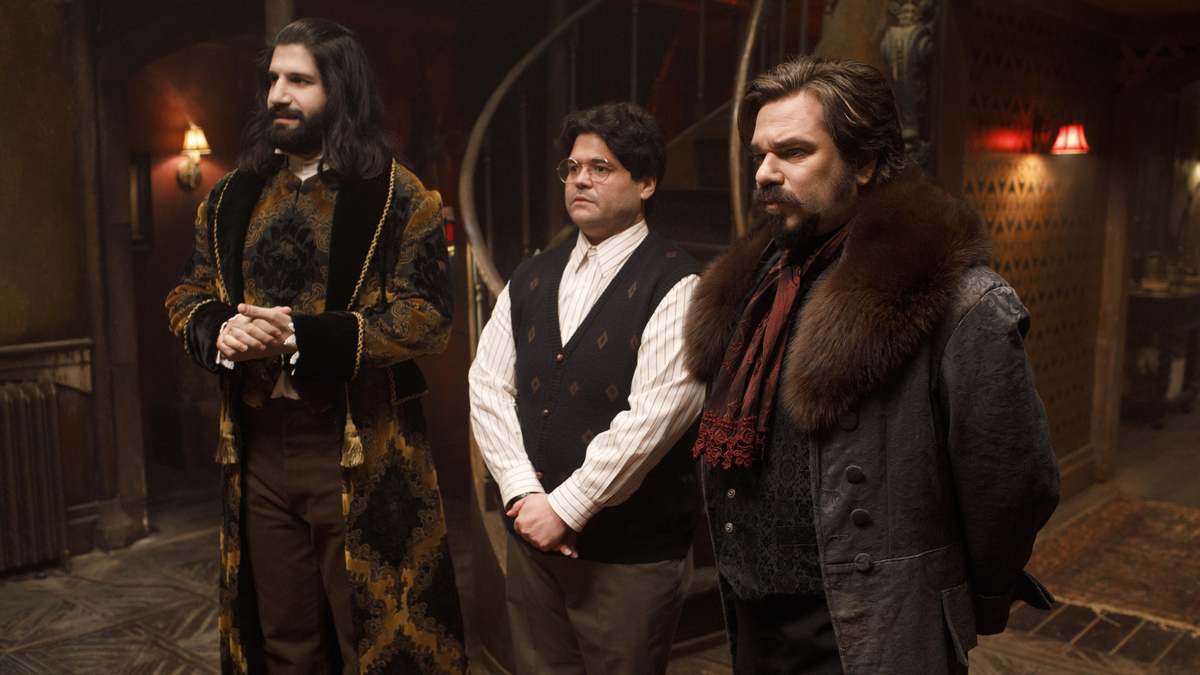 Protect Ya Neck: Nandor (Kayvan Novak), Guillermo (Harvey Guillen) and Laszlo (Matt Berry) receive visitors in the FX series, What We Do In The Shadows.

In 2014, New Zealand co-directors/co-writers Taika Waititi and Jemaine Clement released What We Do In The Shadows, a hilarious, shambling-yet-unerringly-precise mockumentary about a group of vampires sharing a house in modern-day Wellington, New Zealand.

The two men also starred in the film, as a pair of odd-couple vampire roommates: the sweet-natured dandy Viago (Waititi), all pinky rings and ruffled shirts and concern about the upkeep of the house's common areas, and the surly, less-sinister-than-he-thinks-he-is Vladislav (Clement). Jonny Brugh and Ben Fransham played two other undead housemates, and the whole endeavor was driven by a commitment to spoofing both the documentary format (shaky camera, testimonials, the subjects' hyper-awareness of their status as documentary subjects) and the ropiest tropes of vampire lore (the vamps go clubbing, only to grow increasingly frustrated when bouncer after bouncer neglects to expressly invite them in).

The central joke — the film's artisanal blend of the grotesque with the utterly, punishingly, unremittingly mundane — made for a tone that just worked. Marked by the same dry, deadpan, low-wattage and quintessentially Kiwi affect that typified HBO's Flight of the Conchords (which Clement co-created with Bret McKenzie and James Bobin; Waititi wrote and directed several episodes), the original What We Do In The Shadows exuded so much easy, unforced charm and sustained cleverness you just wanted to crawl inside it and live for a while.

What Do We Do 'In The Shadows'? Dishes, Mostly

Now (Wednesday, March 27, specifically) to the FX Network, comes the U.S. incarnation — not a film, but a 10-episode series — and if fans of the 2014 film harbor any qualms about that prospect, it's understandable. After all, the movie deftly exploited — one could even say drafted on — New Zealanders' reputation as some of the more unprepossessing members of the global community. Which is why, despite the characters' arcane abilities and everyday evilness, they came across like underdogs you couldn't help cheering for. Could an American series strike that necessary, slightly diffident tone? And could that tone take root, once transplanted half a world away from the island on which it germinated?

And then there was the question of story. The film clocked in at a tight 86 minutes, which seemed just about perfect. The notion that its premise — however good, however solid — could benefit from getting stretched over the course of five hours seemed wildly unlikely.

Rest assured, Shadows fan and newbie alike, that the FX series captures the all-important, dry-as-gravedust tone, and, if the first four episodes made available to the press are any indication, it has figured out how to outfit its one-joke premise with enough different drivers of narrative momentum to keep viewers watching.

It doesn't do this right away, however. Not immediately. The pilot episode's opening minutes map too neatly over the film's: We meet the various players in much the same way. There's the same "vampire house meeting" gag. And we're introduced to Guillermo (Harvey Guillen), an all-too-human vampire's assistant who, exactly like the film's Jackie (Jackie van Beek), labors long and hard in hopes to one day be turned by his master.

Even their dark, appealingly shabby mansion strongly resembles that of the film, though instead of the Wellington suburbs, it's located in the heart of New York City.

So, you know, the pancreas of New York City.

Soon enough, however, the series' characters distinguish themselves, and the cast members establish their own rhythms. There is Nandor (Kayvan Novak), once a fierce, bloodthirsty warrior of the Ottoman Empire, who is now a vain, bumbling and quite literally bloodthirsty vampire who passively mistreats his sweet-faced human familiar (Guillen). There is the couple: ostensibly handsome and charming Laszlo (The IT Crowd's Matt Berry) and the powerful Nadja (Natasia Demetriou) who, as the series opens, chafes against her role as de facto vampire matriarch — and develops a roving eye that alights upon, among other people, community college student Jenna (Beanie Feldstein).

The four leads are great, the jokes crisp and fast and funny, and the visual effects are employed just as effectively as in the movie, folded seamlessly into the handheld-camera aesthetic so they seem all the more uncanny. It doesn't take long for the characters to receive a kick in the pants that raises the stakes and propels them into the season with a sense of urgency — something the film, for all its manifold qualities, never much bothered with.

But let's talk about Colin Robinson, the show's MVP, and the most striking example of its ability to find new laughs the further it strays from the world defined by the movie.

Robinson is a bald, bespectacled, be-beige-cardiganed lump of an office drone who's a kind of vampire new to the series. Crucially, he's played by the wonderful Mark Proksch, who has turned up most notably in a handful of episodes of Better Call Saul as woefully unprepared and overmatched drug supplier Daniel "Pryce" Wormald. (Also: Google Kenny "K-Strass" Strasser sometime, when you need a pick-me-up of the cringiest variety.)

Robinson makes an appealingly weird and uniquely American addition to the mix, and Proksch plays him with a studied, virtuosic blandness that's chillingly recognizable.

As dependably funny as the series is, Proksch's performance speaks to its willingness to bring new ideas to the format established by Waititi and Clement back in 2014. The two men are maintaining a hands-on approach to the material (both Clement and Waititi are series writers; they directed three episodes each).