Accessibility links
Book Review: Claire Harman's 'Murder By The Book' Asks If Literature Could Lead Someone To Kill Author Claire Harman writes that one reason François Benjamin Courvoisier gave for why he murdered his boss Lord William Russell in 1840 was that he wanted to model himself on a book character. 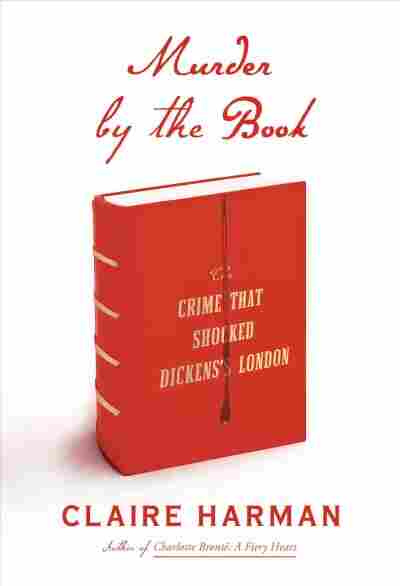 The Crime That Shocked Dickens's London

The scene could have come from a novel: an unlocked door, a screaming maid, and an "unobtrusive minor aristocrat" lying in bed with his throat cut.

It was 1840, and Lord William Russell had lived quietly, with no apparent enemies: "'Aged and respected,' he was called in the Times, like a cheese," writes Claire Harman in her wry, sharp Murder By The Book: The Crime That Shocked Dickens's London. "It is almost an unparalleled thing for a person of Ld William's rank, to be killed like that," Queen Victoria wrote in her diary. (She would survive an assassination attempt a few weeks later).

When Russell's valet, a Swissman named François Benjamin Courvoisier, was convicted of the crime, it both reminded the upper classes that they were at the mercy of the help and also opened a national debate over the dangers of violence in literature. At the time of the murder, a new class of novels proliferated — ones that "celebrated the native cunning, ambition and potential of the ordinary man" through gory tales of highwaymen, robbers, and murderers. The most notorious of these Newgate novels (named after the prison) was bloody Jack Sheppard, by William Harrison Ainsworth.

Courvoisier gave several contradictory explanations for why he murdered his employer, none wholly convincing. But among them was the idea that he wanted to model himself on Jack Sheppard. To the ruling classes and the press, it seemed to confirm the fundamental malleability of the lower classes, who with the wrong cultural models were prone to violence and insurrection. The Examiner newspaper wrote "that detestable book" is "a publication calculated to familiarize the mind with cruelties, and to serve as the cut-throat's manual, or the midnight assassin's vade mecum, in which character we now expect to see it advertised."

So, can a book cause someone to kill? Harman is skeptical, and suggests several other possible incentives, including sex: One of the case's odder aspects is a naked man seen in Williams' room the night of the murder, from a window across the street. But Harman fails to connect the public furor around the Courvoisier case to the recurring question of whether violence in literature or onscreen poses a threat — and what our persistent worries that it does mean for how we understand influence, morality and fiction.

The controversy over Newgate novels feels essentially the same, for instance, as the current debate over whether drill music is responsible for waves of stabbing in London: As Sam Knight wrote in a New Yorker story called "The Soundtrack to London's Murders," drill is "a pared-down, slang-ridden form of London hip-hop, which kids like to listen to on their phones, and which often includes references to "fishing" and "dipping" and "shanking" and "swimming." To the uninitiated, that's stabbing, stabbing, stabbing, and being stabbed." Or take Slender Man, a fictional online character who, according to two 12-year olds in Wisconsin, inspired them to stab a third 19 times.

Despite the contemporary feel of this hand-wringing, the larger question — can art change behavior in dangerous ways? — goes back to Plato. In the Republic, Socrates banishes poets from the Republic because of the danger they pose to public morality. After all, won't young people, reading certain passages of The Iliad, want to imitate those selfish, brooding heroes like Achilles, with terrible results? Harman doesn't bother connecting the Courvoisier case with the larger history of this idea. Her touch is so light and her voice is so wry you almost feel she is too tasteful to try for anything as crass or explicit as relevance.

But Murder By The Book would be more interesting if she looked at how that question has recurred with amazing regularity throughout history, and how it so often suggests a belief in the essential malleability of some group of people: the lower classes; racial minorities; children. Those people can't be trusted around bad influences.

At the same time, for an idea so steeped in prejudice and fear, there is something wonderful about it. Because if a book could make someone kill, what else might it be able to do?

Read an excerpt of Murder by the Book