Accessibility links
Why Pedestrian Deaths Are At A 30-Year High "It's great advice to tell people to use a crosswalk, but that's not very useful if the crosswalk doesn't exist," says Tom Ellington of the Pedestrian Safety Review Board in Macon, Ga. 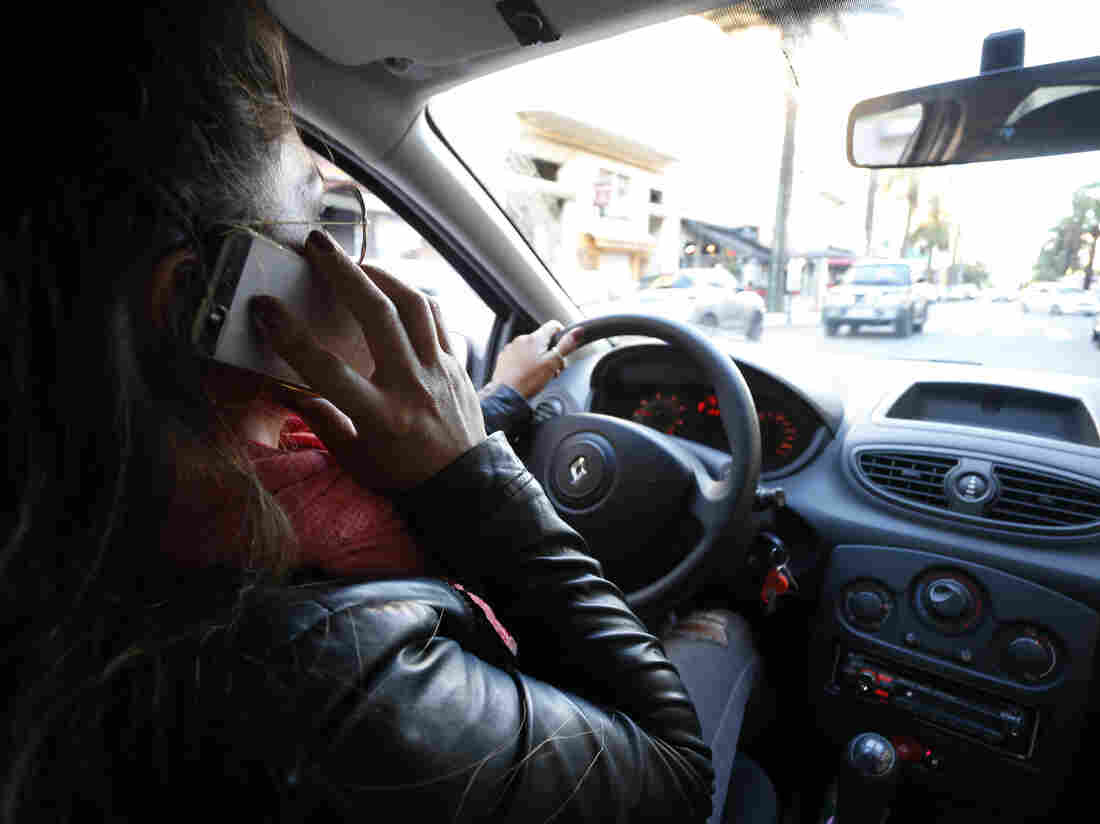 A woman speaks on her phone while driving. Both drivers and walkers use cell data 4,000 percent more than they did in 2008, which means they aren't watching the roads. Pascal Pochard-Casabianca/AFP/Getty Images hide caption 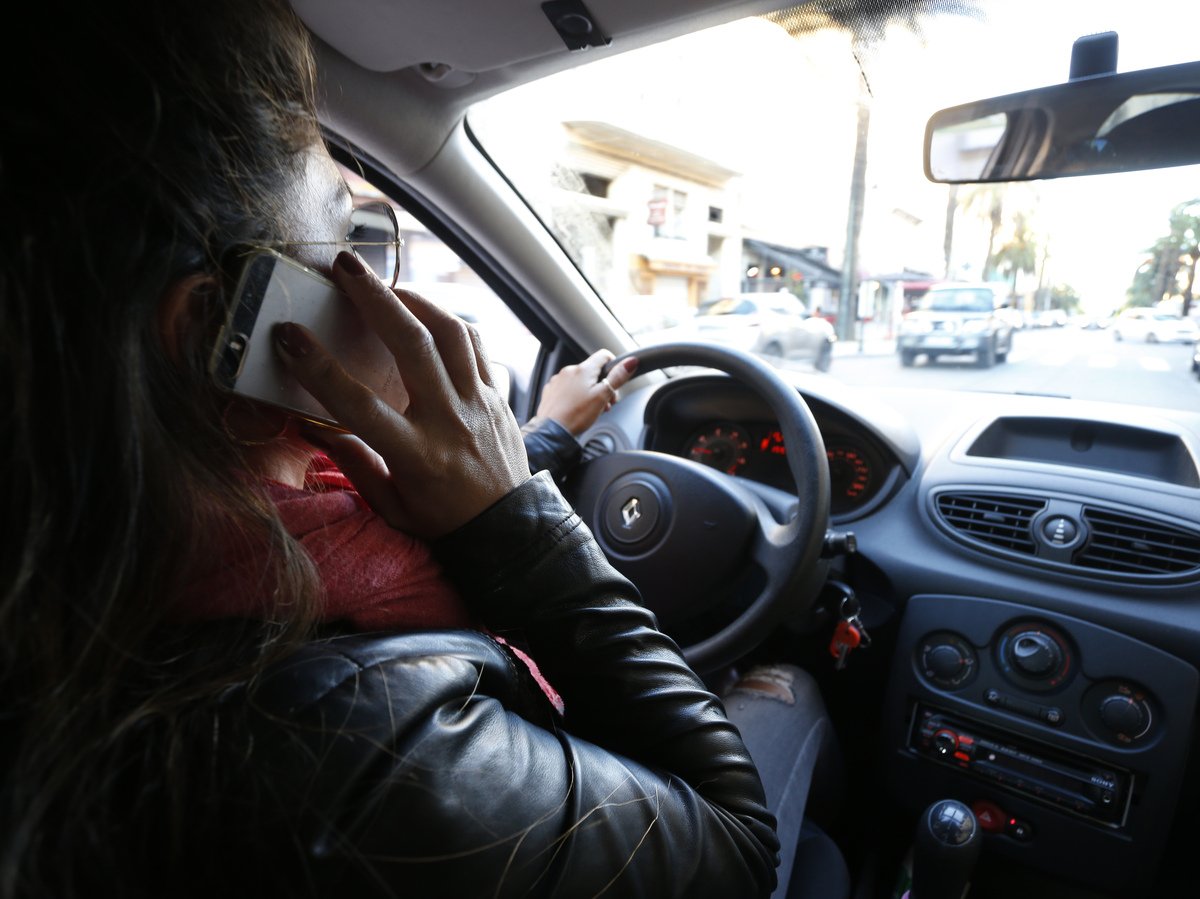 A woman speaks on her phone while driving. Both drivers and walkers use cell data 4,000 percent more than they did in 2008, which means they aren't watching the roads.

Across the U.S., 6,227 pedestrians died in traffic accidents in 2018, the highest number in nearly 30 years. The findings from a Governors Highway Safety Association report show that many of these deaths occurred in big cities like Houston and Miami.

The signs are all over most cities — stretches of road without crosswalks and people needing to walk on roads built for rush-hour traffic. But the real increase, experts say, comes from larger trends: drivers and pedestrians distracted by their phones and a growth of larger vehicles on the road.

"Amos was a good person. He was really kindhearted," she said. Walking between traffic cones and the curb of a five-lane highway, she pointed to the street he would have walked down that night. Harris had been out after dark, searching for his nephew, when he crossed Riverview Road at a blinking light. "He came down and crossed here and was hit," she explained. His body was thrown 100 feet.

Georgia is one of five states that made up nearly half of all the nation's pedestrian fatalities in 2018. The others were Texas, Arizona, Florida and California. In California, 432 pedestrians were killed in just the first half of 2018. Several of these states also had a significant increase in population, which the report finds is a contributing factor in the fatalities.

"Designed for cars and not for people"

But population growth, like jaywalking, isn't central to the problem, according to Tom Ellington, chair of Macon's Pedestrian Safety Review Board. The county created the board to address the city's long-standing problem with pedestrian fatalities. Ellington said blaming jaywalkers for the problem ignores the big picture. "We've spent decades building a transportation system that's designed for cars and not for people," he said.

In Macon, many thoroughfares are also state highways, one of the types of roads where pedestrian fatalities are common. "We have an awful lot of people who don't have their own vehicles who are dependent either on transit or on their own foot power to get around," Ellington said. That makes them particularly vulnerable to roads that were designed for fast-moving semitrailers and rush-hour traffic.

It's great advice to tell people to use a crosswalk, but that's not very useful if the crosswalk doesn't exist.

"I could point you to places that have as much as a two-mile gap between crosswalks. It's great advice to tell people to use a crosswalk, but that's not very useful if the crosswalk doesn't exist."

Even when there is one, it is often too far. Research has found that most people will walk only 300 feet to the nearest crosswalk. Amos Harris would have had to walk 600 feet out of his way in one direction or a mile in the other.

Richard Retting, the author of the Governors Highway Safety Association report, said this is an underlying problem, but the spike in deaths can't be blamed on the sidewalks. "There wasn't a 10 percent reduction in sidewalks from one year to the next," he said in a phone interview.

Something else accounts for the 30 percent jump in pedestrian deaths in just the last 10 years. "Looking at the various metrics available, the ones that pop out to me are distraction related to smartphone use and the market share increase in SUVs."

Since 2013, the number of consumers buying light trucks has far outpaced those buying cars. "There's no question that pedestrians hit by SUVs are more likely to die than those hit by a car," he said. SUVs are bigger, heavier and deadlier for pedestrians.

Compounding that problem are smartphones. Both walkers and drivers use cell data 4,000 percent more than they did in 2008, which means they aren't watching the roads. Retting said he would like to see autonomous pedestrian sensor technology added to more vehicles. The technology does exist but isn't widespread, and it won't be in most cars anytime soon since most vehicles on the road today are at least 10 years old.

Achilleas Kourtellis, assistant program director at the University of South Florida's Center for Urban Transportation Research, said another approach to the problem is dealing with bad driving. "No matter what you put out either on the road or in the car, you still have people involved," he said. "We know that the human is the cause of most crashes — actually 94 percent of most crashes — meaning there is room for improvement in behavior."

In Florida, for instance, the majority of crashes involve local distracted drivers — not tourists. Distraction can mean a lot of things too, he said. "It's not just the phone. You're putting lipstick on or you're eating or things like that that distract you from driving."

Florida is considering legislation that would allow police to ticket drivers for any type of distracted driving, including petting your dog or yelling at your kids. That type of law exists in five out of the six New England states, which saw, overall, a 36 percent drop in fatalities last year. Rhode Island alone dropped from 10 fatalities in 2017 to just four last year, a 60 percent decrease.

Kourtellis said that this points to the effectiveness of enforcement in changing behavior.

A previous version of the Web story incorrectly cited the number of pedestrian deaths in California in 2018. The figure cited, 432, represents only the first half of 2018, according to the Governors Highway Safety Association. Also, a previous version of the audio included a statement that said a distracted driver, traveling at highway speeds, could travel the distance of four football fields in 4 seconds. It's more like the distance of one football field.